You are here: Home / Featured / The Best Swamp Thing Comics of All Time!

From straightforward horror storytelling to environmental radicalism to psychedelic explorations of the boundary between man and nature, Swamp Thing is consistently inconsistent, but that’s also to his benefit! An enigmatic character that draws renewed creativity out of storied creators like Alan Moore, Scott Snyder, Brian K. Vaughan, and more, Swamp Thing has historically been a title that commands respect and reverie for good reason. At the very least, it’s all but guaranteed there’s nothing else like a good Swamp Thing comic, and these are among his very best. 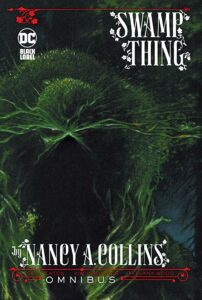 7. Swamp Thing by Nancy A. Collins

Recentering the second volume of the character’s solo run during a period of creative disagreement and turnover in the early 90s created by Moore’s exit from the title, horror writer Nancy A. Collins’ Swamp Thing (issues #110 – 138 with annuals) is a basic, but compelling story, with a consistent appreciation for the Bronze Age fundamentals: horror and hyper localization. Taking place almost entirely within the rural Houma, Louisiana, Collins’ story is broken into smaller and more interpersonally driven arcs than its preceding issues, but it also feels at times deeper and more nuanced because of that.

The narrative lens here is focused on the politics of the region — one villain is directly based on real life villain David Duke — the environment, the local folklore, and most importantly the relationship between Swamp Thing, his wife Abigail “Abby” Arcane, and their child, Tefe. It’s small, regionally specific and at times frustrating, frequently portraying locals as narrowminded racists and villains with no redeeming qualities, but it’s also predicated on well written character exploration that elevate its lowest moments. Collins desire to celebrate the local stories and history of the region Swamp Thing is known for is admirable.

Alec here is someone who desperately wants to be a good father, a husband, and a man but is burdened with knowledge and responsibility beyond his means, confronted by the rapid changing of the region around him (literally and figuratively, there’s mutant killer plants here). He relies on a well written supporting cast of Abby and Constantine, but he can’t help but be consumed by his natural desires and frustrations eventually shunning their companionship in a midlife crisis of sorts and finding himself alone, moments of punctual and haunting body and existential horror — including the resurrection of major series villain Anton Arcane — along the way. Some of the choices here are controversial, and with good reason as beats drive farther and farther away from feeling like things these well-established characters would do but as a return to the basics, some of that brazenness is appreciated.

A dramatic story that finds the character at a crossroads both within and outside of the text, and takes that crisis to its satisfying, heartbreakingly natural conclusion. And hey, the famous image of Swamp Thing, the sun shining down on him as roses bloom from his body, is from this run if you need any confirmation of how good the art is. 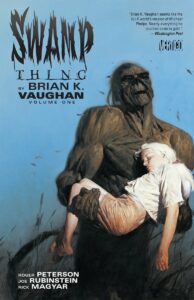 The third series of Swamp Thing’s solo titles, Vaughan’s is a drastic departure from the sagas before it, but is also essential to understanding Swamp Thing’s importance on a conceptual level.

An artistically uneven and episodic exploration of Tefe’s life and her search for identity — reducing Alex and Abby to controversially semifrequent guest appearances — the narrative is frequently frustrating and difficult (even its opening is predicated on the Parliament of Trees planning the death of all of humanity) but also humanistic and revealing, bringing to life contained, microcosmic expressions of the uneven balance between humanity and the Earth to make a case for both The Avatar and The Green’s roles, and for the difficult choices they have to make on a grander scale.

Tefe’s life is a burdened, but also a beautiful one that more directly investigates and negotiates the necessity for change than even Alec’s has in times before it — culminating in a significant choice and subversion of norms that’s appropriate and on par with the best works of Moore and others, and feels creatively essential and important for fans looking to understand the character in a deeper sense. 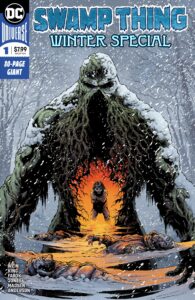 A reminder that nearly 50 years after his debut, Swamp Thing still has unique, important stories to tell. Writer Tom King and artist Jason Fabok deliver a deeply saddening story of Swamp Thing, his powers waning, trying to navigate a lost boy through a blizzard before eventually having to do what’s necessary to survive, a reinforcement of the kind of burden that has haunted him for decades, better with him than anyone else.

The main takeaway here, however, is the inclusion of Len Wein’s final Swamp Thing comic, the first issue of a miniseries with artist Kelley Jones, left unfinished due to Wein’s death. The comic includes a touching tribute to him, to his legacy, and to his characters — a memorable memorial that Swamp Thing fans new and old will surely appreciate. 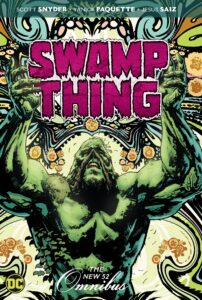 Perhaps the single best New 52 comic, and also one of the longest running, Scott Snyder and later writer Charles Soule’s Swamp Thing is a no holds barred horror exhibition with few equals.

Depicting a dramatic, renewed war between The Green (plant life, led by the Parliament of Trees), The Red (animal life, led by The Totems), and The Rot (death and malaise) as Anton Arcane, Avatar of the Rot, makes a death glorifying gambit to upset the balance between their realms, New 52 is undeniably the most action heavy Swamp Thing comic — our hero grows wings and swords from his own body to combat hordes of undeath (frequent artist Yanick Paquette brings the heat) — but it also takes time to explore characters with a renewed focus on the similarities between Man and Earth.

Both Snyder and Soule approach the story as a means to explore the ebbs and flows of life and death that has driven Alec’s life since his becoming The Avatar of The Green, appropriate for the character, and for the New 52 at large. Swamp Thing experiences loss after loss, the Earth itself fading away to Rotworld (and a crossover with Lemire’s Animal Man), and Abby distancing herself from Alec as he tries desperately to keep her from becoming the Avatar of Death, a mantle she has seemed destined to fulfil for far too long.

It’s an often melodramatic, sometimes silly (Soule’s run gets weird and narratively uneven, corncob men and all) but also succinctly somber meditation on the necessity of Swamp Thing’s position as someone who both willingly and unwillingly emulates the same cycles of death and rebirth that the planet itself does — and at odds with the likes of The Red, The Rot and The Machine with good reason. The most essential of New 52’s offerings at the very least. 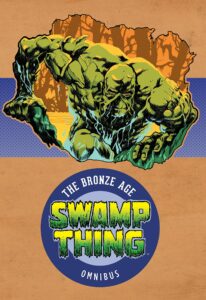 The original Swamp Thing solo saga from character creators Len Wein and Bernie Wrightson, and eventually David Michelinie and Gerry Conway, Nestor Redondo and Fred Carrillo, is more often straightforward than not, but it’s also deeply successful at what it does.

While predominantly a horror series, Wein’s writing, complimented by Wrightson’s striking, detailed and dramatic work, has a sense for the conceptually grandiose that outshines its bronze age contemporaries with ease. Here we see the introduction of the obsessed with immortality Anton Arcane and his niece Abby, governmental intrigue, ecoterrorism, and radicalism, and even aliens in deft fashion without much of the fat — sleek, compelling stories equally romantic, violent, and strange and navigating and subverting conventional horror and sci-fi imagery in a way befitting the character’s legacy, both the shadow and light of the swamps, the inherent strangeness of nature.

Things take a significant turn for the worse when Wein’s run ends in this collection, but the legacy of both he and Wrightson’s work, the strength of its concept and its inherent drama is commendable, casting an imposing shadow on every series to follow. 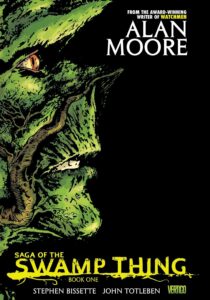 2. Alan Moore’s The Saga of The Swamp Thing

The first mainstream comic to proceed without the Comics Code Authority’s approval, Alan Moore’s Sage of The Swamp Thing is an often uncompromising, uncomfortable manifesto for the changing of the world. Freed to explore whatever angles he wanted by editor Karen Berger (one of the best comics editors of all time) Moore sets to work reinventing Swamp Thing as more monster than man, an expression of the Earth trying to navigate the humanity it hosts.

Spurned by a crisis of identity, both Alec Holland but not, Swamp Thing’s search for understanding and compassion is a compelling one that explores political, environmental, and romantic ideas with nuance and reach well beyond most other books of the time. This series includes the introduction of the Parliament of Trees, John Constantine, and countless other religious and supernatural figures that still feature in the likes of Justice League Dark and more today. The central conflict with the Floronic Man acting as a constant, foreboding shadow over the beauty and breakthrough of the narrative’s smaller moments.

Moore’s run is an unforgiving, often uncomfortable one that investigates both regional and global prejudice, racism, sexuality and more without pause, but it also feels timeless because of it. It’s bold, daring, and different and few things like it have come since. 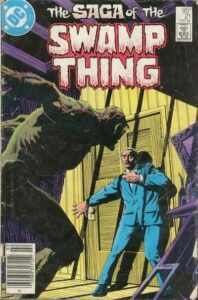 Perhaps a cheat given that it’s included in the collection ranking at #2, but it must and cannot be denied that “The Anatomy Lesson” is the single best Swamp Thing issue to-date. Writer Moore and artist Steve Bissette’s reinvention of the character is also a reinvention of the comics form, experimenting with conventional page and panel design, narrative style, and character history in a dramatic way that almost nothing like it before had. A testament to Swamp Thing’s ability to endure, to persist through the ever-present cycle of life and death.

The most essential Swamp Thing story for both fans old and new, and a masterpiece of the form that has to be read to be believed.