Alan Moore’s run on Saga of the Swamp Thing

is really darn good. The story of a plant who believes it’s a man, wandering the universe trying to find its place in everything – it’s melancholy and introspective, and it’s one of the most acclaimed Big 2 comics out there. So of course, it’s a hard legacy to live up to. There have been plenty follow ups, most of them unremarkable – even from creators who are otherwise fairly noteworthy. But DC decided to give it another proper shake in the New 52, with Scott Snyder taking the reigns.

Snyder’s run immediately distinguishes itself as something quite different from its predecessors, establishing right away that Alec Holland is, in fact, a person. More than that – Alec Holland had died and been replaced by a plant who thought it was a man. But in an act of grace from The Green, he was eventually resurrected and given a new lease on life. It’s… a weird situation, especially in the context of the New 52’s branding as a complete beginner-friendly reboot. We’re expected to understand that the events of Moore’s run did occur, but now the original Alec Holland is back. Sure, whatever.

As its own entity, though, the run’s fascinating. It veers so hard into its new direction that it’s quite unlike everything that came before it. Swamp Thing is the Avatar of the Green, yes, but he’s more than that. He’s the Green’s sole warrior to defend against the Red (animals) and the Rot (decay). The entire run is focused around a war between these three forces of life, instigated by the genesis of a new Avatar of the Rot. It’s high stakes, constantly moving, and genuinely feels like an event comic before the actual event even starts. 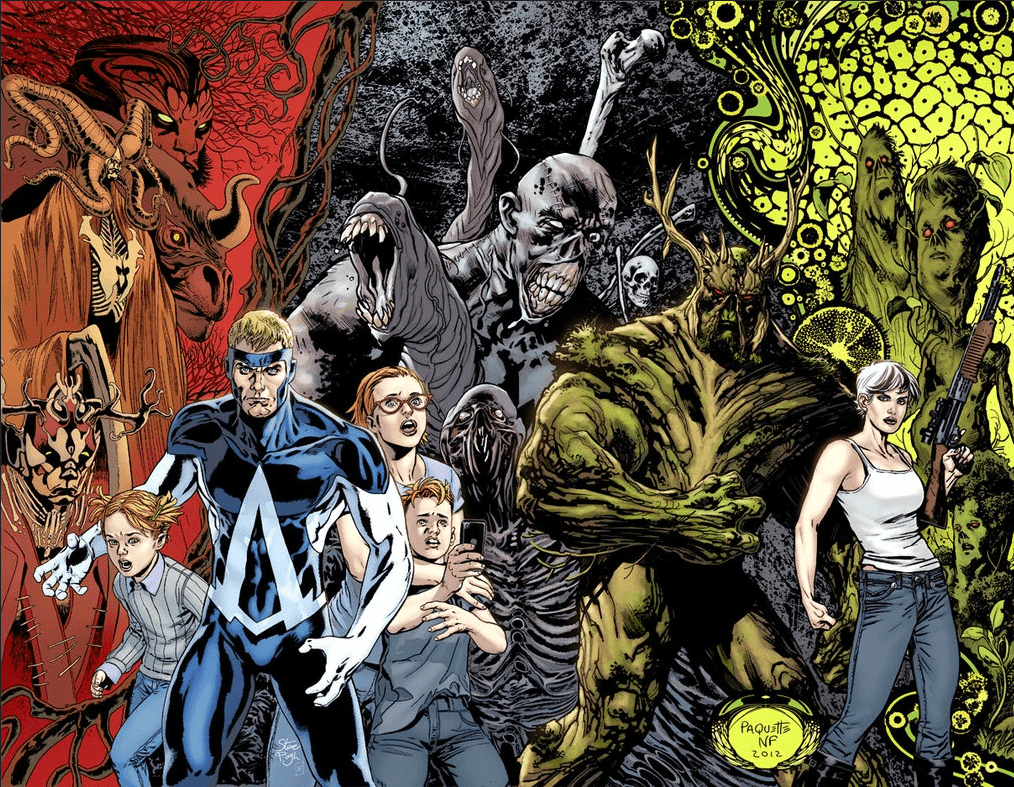 The Arcane family serves as the majority of the supporting cast in this book – Anton Arcane and his nephew William serve as the antagonists, while Abigail Arcane, William’s half-sister, is both Alec’s love interest and a major player in the actual conflict. Their family drama borders on gratuitously edgy and gruesome, but Abigail and Alec’s relationship is an interesting twist on the classic romance of Moore’s era. Snyder knows his run won’t be able to emulate a beloved classic, so he instead moves past it, giving the characters new directions and purposes to make them his own. Connecting the Arcane family with The Rot serves to entwine Alec’s own life with it beyond his existence as the Avatar of the Green, and it works well.

Yanick Paquette and Marco Rudy are the main artists on the book for the first two arcs, and they’re both fantastic. Paquette’s not as refined as he’d later reach in books like Wonder Woman: Earth One, but his style is clearly approaching that level. Marco Rudy is well past that point, though – every issue he does has at least one page with a layout that made me gasp. 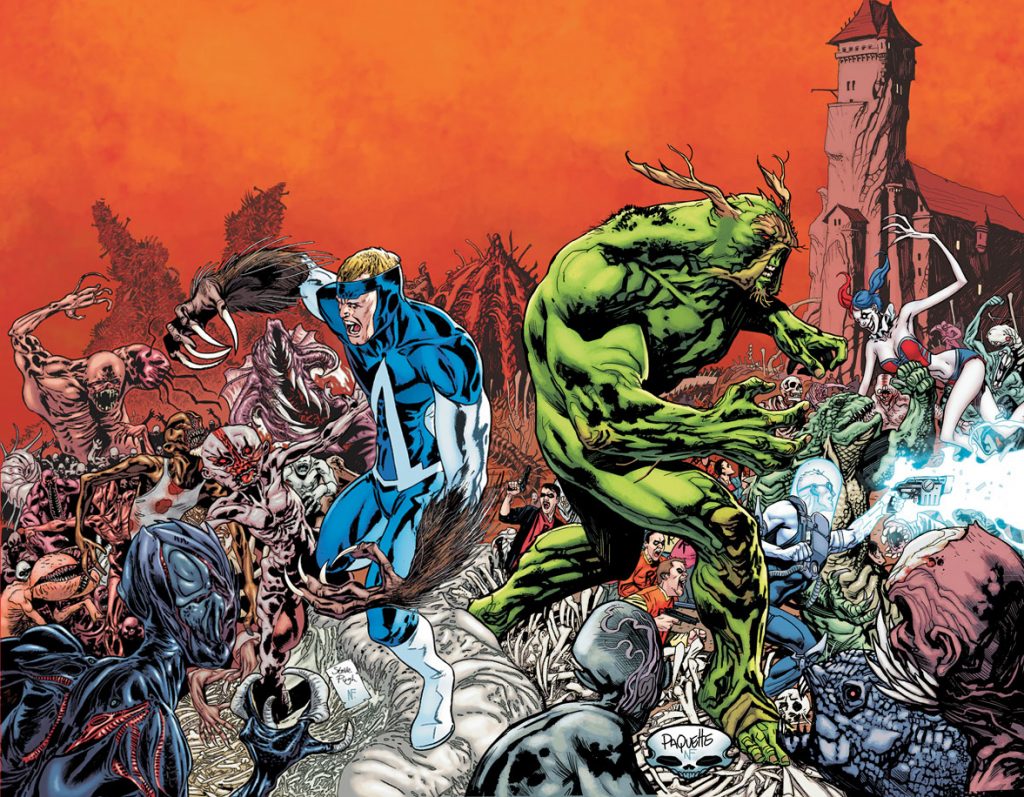 Snyder’s entire run builds toward the third arc climax of “Rotworld,” a semi-crossover with Jeff Lemire’s Animal Man. This is definitely where the run becomes most interesting – the world is plunged into a horrible era of decay and rot. Animal Man goes off doing animal stuff in his own book, while Swamp Thing focuses on rallying the last survivors of the Green to attack Arcane’s fortress and rescue Abigail after she’s taken captive. It’s bombastic and nightmarish in a good way – in a lot of ways, this was clearly the predecessor to DCeased. But underneath this gnarly exterior and huge conflict, there’s a tragedy baked into the core of the story.

Alec and Abigail’s final fate is a fantastic ending to this first run on the New 52 Swamp Thing. Everyone knew “Rotworld” was going to end with everything getting put back to normal – you can’t have the whole DC Universe permanently turned into zombies, after all. So rather than try to convince the audience of the stakes of this massive conflict, the book instead convinces us of the personal conflict. After an 18+ issue saga of a rekindled romance, Alec and Abigail are forced to remain apart for the rest of time, lest they both perish. It’s a really strong conclusion to the run that wipes Alec’s slate clean and allows the character to not be tangled up in a romance that could never be written as well as it was 30 years prior.

Charles Soule’s run picks up immediately after this tragic finale, and it immediately changes the tone of the run. Alec’s immediately more introspective and less outwardly emotional. It’s clearly more directly inspired by Moore’s run, but Soule does his best to not feel derivative. The run starts off with ominous mentions of a new entity called “Seeder” who’s draining the life force of the Green. But before we get to deal with that, Swamp Thing has to do some short team-up arcs!

The first is a team-up with Superman against the Scarecrow that mostly just feels like a bad Superman story – Clark just gets angry and tells Alec to leave. Then there’s a Constantine team-up that involves a town getting more and more bloodthirsty that felt hamstrung by the fact that this is a PG-13 book. I’m not saying that we need the depravity of like, Sandman‘s “24 Hours,” but Soule was clearly trying to emulate that, and being stuck in the Rated-T section just made it feel kind of cheap. This little story serves more to set up the Seeder conflict that then takes over the rest of the first act of Soule’s run. 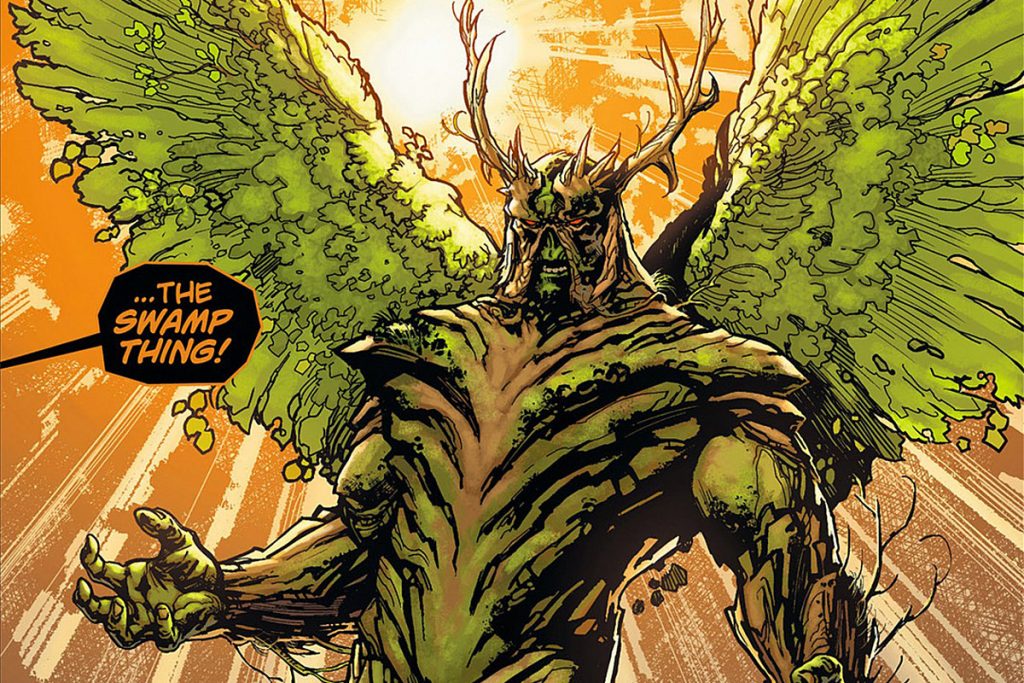 Seeder is an interesting concept, because he’s really a revamp of the classic Swamp Thing villain Jason Woodrue, AKA the Floronic Man, who was the first antagonist of Moore’s run. But he’s also a complete reboot of the character, implying that Moore’s run never happened? I’m going to try and not get lost in the weeds of continuity here, but this was definitely confusing. Beyond this, though, Woodrue’s presence in the book serves as that of Alec’s own foil. Where Alec tries to use his position as the Avatar of the Green to encourage harmony and coexistence, Woodrue is ruthless, desperately vying to replace Alec and take the power of the Green for himself.

This arc is fascinating, because it starts off fairly predictable – Alec and Woodrue have to duel each other for the right to be the Avatar of the Green, with Alec learning how to be more ruthless and take better advantage of his form. There’s some power level stuff here too, but it’s not what matters. Where this gets interesting is when Alec defeats Woodrue, but predictably chooses to spare his life – this choice is not rewarded, as the Green rejects Alec and gives Woodrue the power to kill him. The idea that the cliche hero-spares-villain choice was the wrong one throws a whole new dimension into the story being told.

Soule’s other big ambition is in the introduction of other analogues to the Red and the Green. The first is the Grey, the fungal consciousness – a concept that had already existed to a degree without much presence. This would honestly be a fairly boring addition to the if it wasn’t for Jesús Saíz’s artwork – he brings a level of detail that turns Miki, the avatar of the Grey, into something grotesque and fascinating. 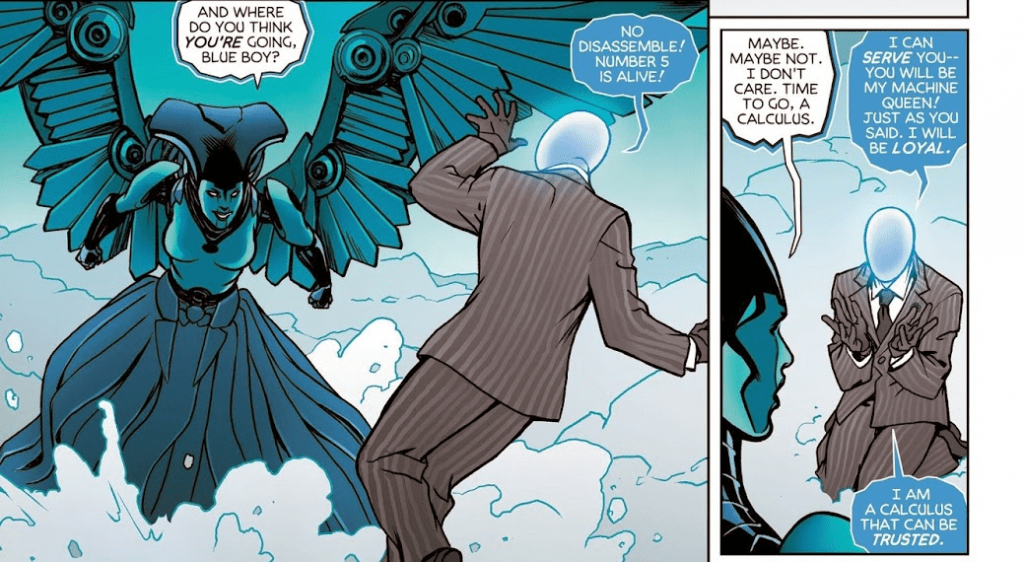 The best part of Soule’s run on Swamp Thing, though, is the Metal – an original concept and creation that posits that the next form of life is machines. As someone who works in tech and studied computer science, this admittedly appealed directly to me. On a base conceptual level, it’s the perfect next stage for the mythology of Swamp Thing. Soule delves into the mechanics of how a new entity comes to exist, and how it would interact with a world far older than it can comprehend. Jesús Saíz draws some genuinely work to sell the primal yet hypermodern nature of the Metal, and they spice up the entire back half of the run.

Unfortunately, this is where the book suffers the most from Soule’s relative greenness as a comic writer. Swamp Thing was one of the first series he wrote, and it shows here – there’s too many plots being juggled and too many concepts he’s trying to play with. The book ends up being paced poorly and none of the ideas get to shine the way they should. The execution takes a book that should be an all-time classic and turns it into something that’s just pretty good – still worth reading, but a disappointment.

On the whole, the New 52 era of Swamp Thing was one of genuine ambition. While Snyder’s run forwent a lot of what made the character feel unique, he was able to create a space for the character to exist outside of the shadow of Alan Moore. Soule’s work wasn’t always executed well, but it was conceptually daring and introduced genuinely fresh ideas. If DC allowed this level of originality and creator-driven stories in more of their books, their entire line would be a lot more interesting. But as it stands, that seems to be relegated to the Swamp Thing title.