You are here: Home / Featured / The Adventures of Obi-Wan Kenobi 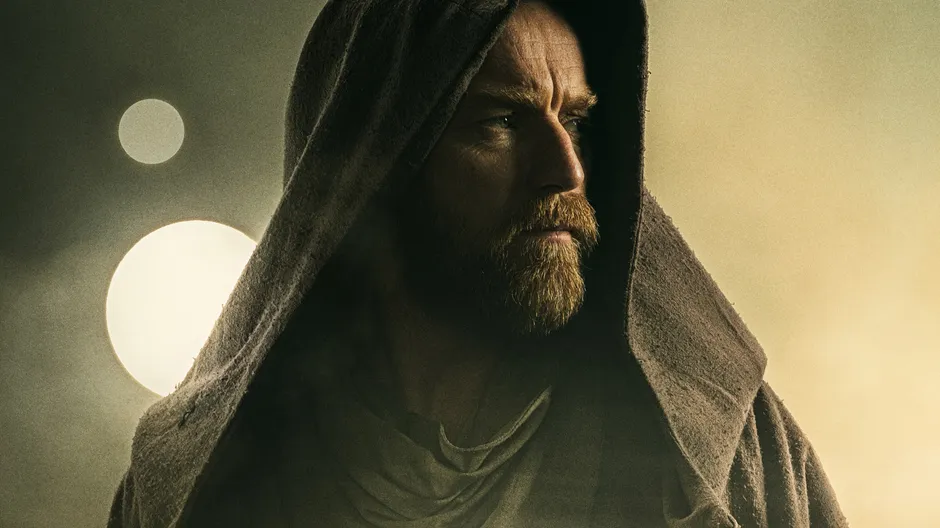 One of the earliest solo Obi-Wan Kenobi solo adventures comes from the original Marvel comic book series. Drawn by regular series artist Carmine Infantino and written by fill-in writer Mary Jo Duffy (who would return to the series as its regular writer for lengthy run at the back end of its run), the tale of a pre-New Hope Obi-Wan is relayed to Luke and Han by Leia, who heard it from her father, Bail Organa. In it, a pre-Tatooine exile Obi-Wan helps a passenger ship evade pirates and keep the peace between arguing factions and simmering anti-droid sentiment aboard the ship. 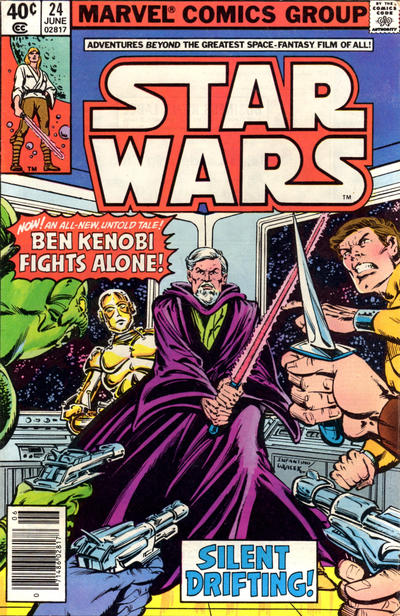 While the comic book Obi-Wan’s characterization is largely consistent with his then-only film appearance–as in he’s not really an action hero, relying instead on his smarts and cleverness to win the day–a lot of the fun of the issue is in the ways it deviates from later “canon,” written as it is at a time when both little was known about the character or the time period of the story and little was restricted regarding what could be done with him: Obi-Wan wears not what we now know to be Jedi robes (which at the time were considered simply basic Tatooine attire) but a more comic book-y blue-and-silver suit, he is consistently referred to as “General” with no mention of the Clone Wars, and it’s suggested he directly interacts more with Bail Organa than he actually does in his canonical exile.

Obi-Wan Kenobi Fun Fact: In the novelization of Return of the Jedi, Uncle Owen was said to be Obi-Wan’s brother!

The Clone Wars: “The Mandalore Plot”/“Voyage of Temptation”/ “Duchess of Mandalore” 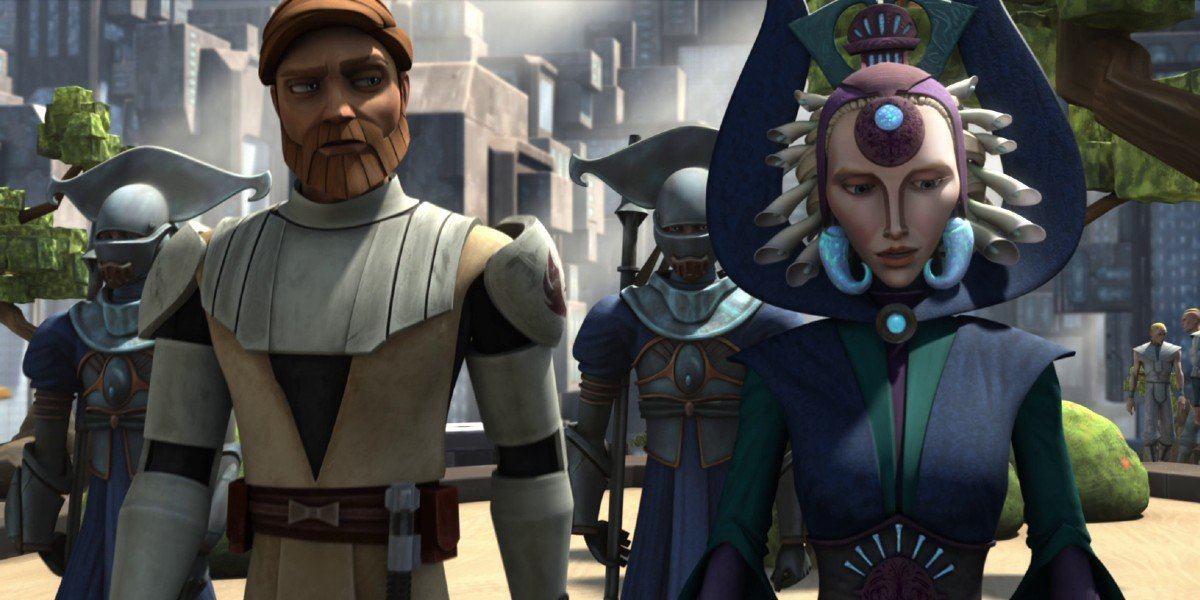 The animated Clone Wars series can be wildly uneven, especially in its early seasons. However, a standout in those early goings is a three part story in which Obi-Wan gets embroiled in the intra-world politics of the planet Mandalore (homeworld of Jango Fett and his clone son, Boba). In the course of the story, it is revealed that Obi-Wan has a romantic history with the leader of Mandalore, the pacifist Duchess Satine (named after the character played by Nicole Kidman opposite live action Obi-Wan Kenobi actor Ewan McGregor in 2001’s Moulin Rouge).

Obi-Wan ultimately helps his old friend and would-be romantic partner stave off a coup by a Separatist-backed militant faction of Mandalorian zealots (for now; Satine and the question of the political fate of Mandalore will return in later episodes of the series and spill out into other shows as well), but the big takeaway from the story is the way it humanizes Obi-Wan by giving him a complicated romantic past. In doing so, it also sets him in contrast to Anakin Skywalker, who responded very differently when his romantic feelings came into conflict with the oaths he swore as a Jedi. 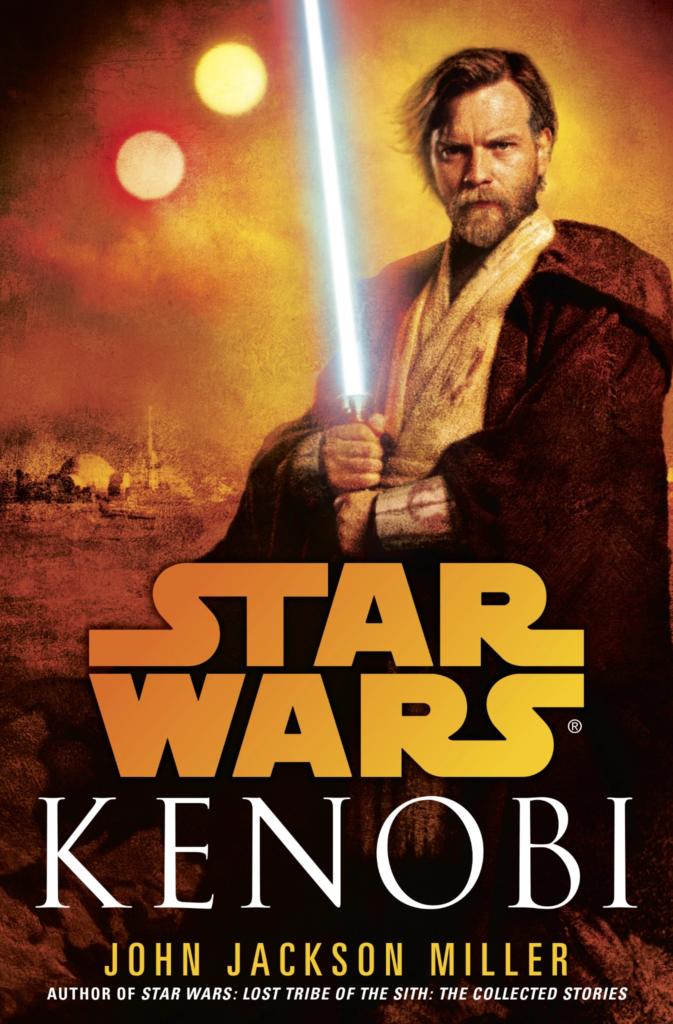 While technically classified as a “Legend” now, this 2013 novel seems like a huge inspiration to what an Obi-Wan streaming series set during his time on Tatooine could look like. Opening in the immediate aftermath of Revenge of the Sith and Obi-Wan’s delivery of infant Luke to the Lars family, it chronicles his efforts to make a home for himself on Tatooine and strike a balance between protecting Luke and keeping his distance, between not drawing too much attention to himself but also not ignoring people in need, all the while coming to terms emotionally with the end of the Jedi Order and the seeming death (at his hands) of his pupil and best friend.

It seems that the Disney+ series is poised to take Obi-Wan off Tatooine and back into the wider galaxy (or, at least, bring the wider galaxy to Tatooine). The events of Kenobi, however, are entirely self-contained to the desert planet, and its connections to the larger Skywalker Saga are more subtle: aside from an early appearance by infant Luke, it’s most notable connection to the “lore” of Star Wars is that it features Obi-Wan’s efforts to communicate through the Force with his deceased master Qui-Gon Jinn and shows Obi-Wan learning about Anakin’s massacre of Tusken Raiders in Attack of the Clones. Though the story is not devoid of action (in many ways, it is one of the more pure examples of the “Star Wars as a Western” trope, with Obi-Wan the lone rider defending a remote outpost against entrenched power and predatory “others”), it is ultimately a quiet and introspective tale of a broken man coming to terms with his grief and finding a way to make a new life for himself while still fulfilling his mission to guide and protect Luke. 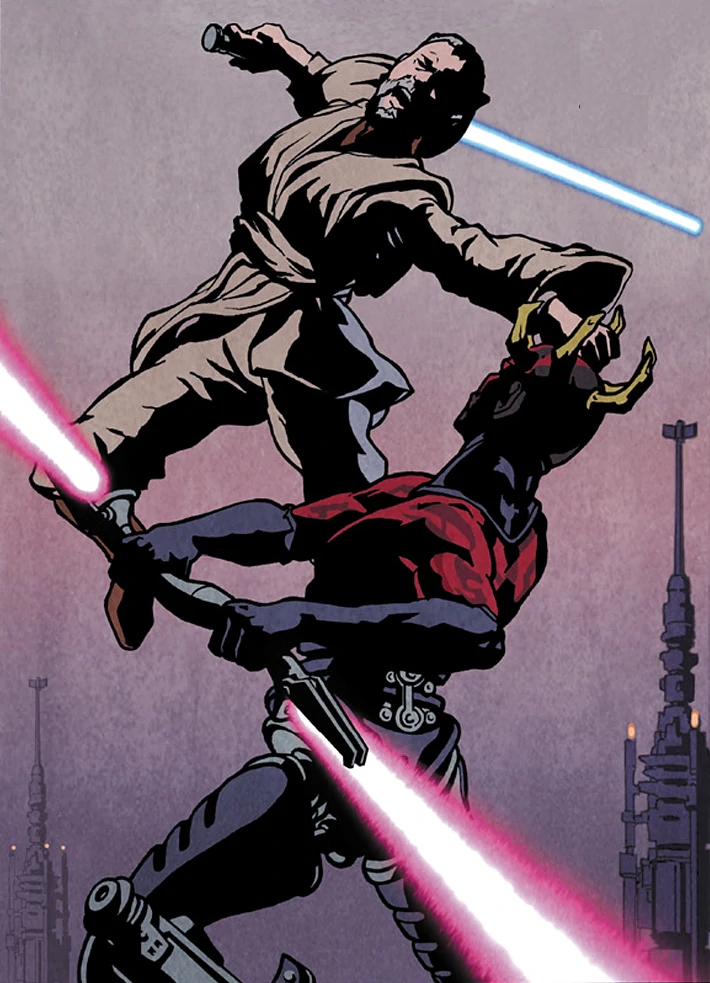 Released in 2005, Star Wars Visionaries is an anthology collection of original comic book stories inspired by concept art originally created for Revenge of the Sith. One of the stories it contains, “Old Wounds” by Aaron McBride, features a not-dead-after-all Darth Maul, sporting a bionic torso and legs, as he attacks Obi-Wan in the Tatooine desert out of vengeance for that whole “chopping him in half” thing in The Phantom Menace. It’s a fun story featuring a surprising turn from Uncle Owen (as well as the less-surprising recurring motif from “Obi-Wan in exile on Tatooine” stories in which Uncle Owen is constantly going on about how Obi-Wan needs to stay away from Luke because he just attracts trouble).

Obviously, the idea of a not-dead-after-all Darth Maul with robot legs stuck, as the character was later revealed to have canonically survived Episode I and returned with, you got it, bionic legs in The Clone Wars, after which he made subsequent appearances in the animated series Rebels and the feature film Solo. The Rebels episode “Twin Suns,” in fact, borrows a lot from “Old Wounds,” featuring a now-canonical confrontation between Darth Maul and a Alec Guiness-like Obi-Wan in the deserts of Tatooine, with the fate of Luke Skywalker hanging in the balance. It’s an appropriately sweeping and quietly epic episode from the underrated Rebels.

Obi-Wan Kenobi Fun Fact: When comedian Jon Stewart was conducting an interview with George Lucas at a Star Wars Celebration event and asked the name of Obi-Wan’s homeworld, Lucas replied with “Stewjon”, a tuckerization of “Jon Stewart”; the world of Stewjon remains a canonical part of the Star Wars galaxy and Obi-Wan’s home planet!

From the Journals of Obi-Wan Kenobi 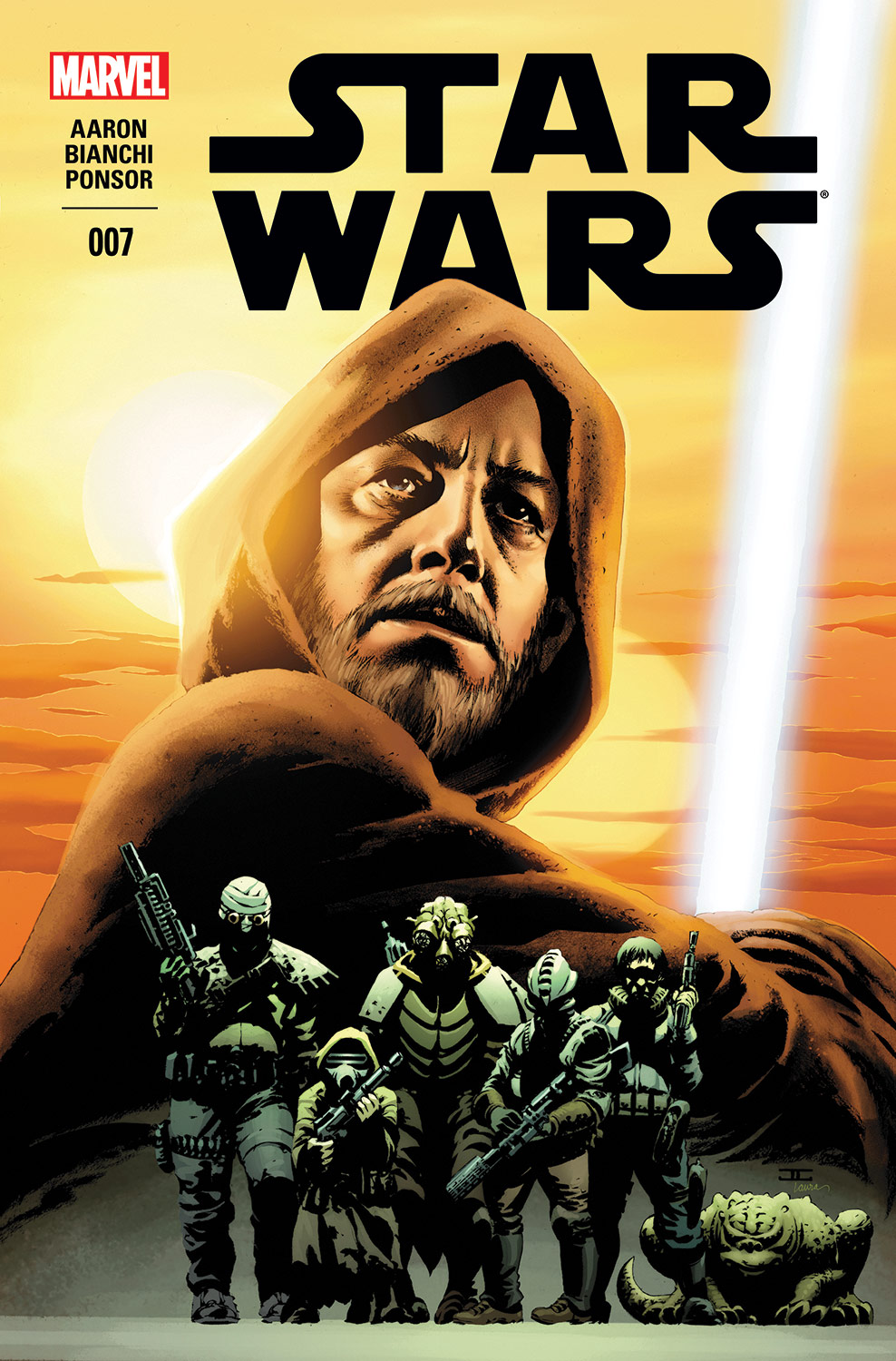 The only current canonical comic book stories featuring a post-Prequel Trilogy Obi-Wan Kenobi, issues #7, #15 and #20 of writer Jason Aaron’s Star Wars series (the first launched after Marvel Comics reacquired the license to create new Star Wars comics after it had resided with Dark Horse Comics for decades) feature a framing device that sets up the stories as entries in Obi-Wan’s journal (being read in the present day by Luke Skywalker). In some ways, they mirror the events of the Kenobi novel, as they largely involve Obi-Wan trying (and failing) to keep to himself while being confronted with threats to the locals he’s uniquely qualified to help combat (including a plot by Jabba the Hutt to control the trade of water on the planet and a confrontation with Book of Boba Fett favorite Black Krrsantan), while also dealing, again, with an Uncle Owen constantly browbeating him into staying the hell away from Luke.

In that, these issues are also similar to Kenobi in offering a proof-of-concept of sorts to the notion of a series detailing Obi-Wan’s between-trilogy adventures. Like the novel, they show that it’s possible to tell exciting, action-oriented stories involving the character in this time period without completely breaking the established notion that he spent twenty years living as a desert hermit, waiting for Luke Skywalker to answer his call to adventure.