Storm #6 is a great jumping on point for new fans as Greg Pak’s characters excite the page with intriguing dialogue and insightful development. Here we have Ororo, fresh from her adventure in Las Vegas, traveling back home to New York City. The adventure she is returning from was originally intended for her now deceased boyfriend, The Wolverine. Fulfilling a final request of his, she took to the city to assist their mutual friend, Yuriko. The results were less than acceptable for Storm, but she took what she could get and is attempting to return home with a clear conscience. This entire series has been great because it’s about Ororo as a singular player rather than just an X-Man or just the wife of Black Panther. Her personalty, her power sets, and her strikingly beautiful mohawk, set her apart from every other cast member, and this book sets itself apart from the other X-titles. 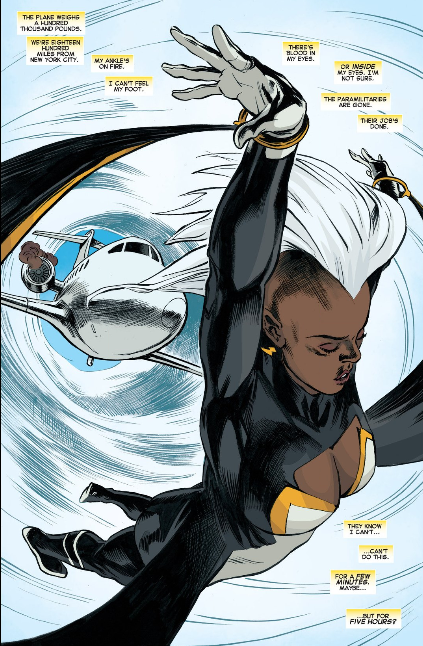 Through her last five issues, the mutant known as Storm has found herself snapping back to places and interacting with people from her past life. From the Morlocks, to Logan’s longtime friend Yuriko, Storm has characteristically proven to be hard headed and resourceful throughout each setback. This is all due in part to Pak’s handle on Storm, which has been nothing short of satisfactory for maintaining a solo ongoing series. Something as simple as her demeanor when dealing with racist accusations on the plane is a great example of this. The author knows his character inside and out; right down to her faults and her advantages. She displays heroic confidence in keeping the plane in the air while dealing with paramilitary troopers and in doing so, is left unprepared for the issue’s timely cliff hanger. Pak polishes and showcases what is fascinating about Storm. She is a single mutant who can operate the way a three or more person Avengers team might. She is a one-woman army and she knows it. Fortunately, she doesn’t have the crass overconfidence some of her peers may have.

The issue may rely heavily on action beats, but it has internal dialogue throughout as a way to guide readers through the turbulence. You can’t beat getting inside the head of a character in the moment. Sometimes the dialogue in stories rambles on or gets caught up narrating the action, which in turn bogs down panels and creates noisy, repetitive boxes that have no purpose. This is not the case with Storm #6. Pak’s inner-dialogue has reflection without the self-narration. It also serves as a natural way to catch up new readers, another great reason why this issue serves as a splendid jumping-on point. In short, the book is anything but conceited, much like the titular hero.

Artistically speaking, stand-in artist Al Barrionuevo certainly does his job but it doesn’t have the same appeal as previous artist Victor Ibanez. Ruth Redmond’s colors however, are once again a highlight of this book and they help to smoothen out Barrionuevo’s almost sketch-book style designs. If this style is something a reader enjoys, probably check out Jason Howard’s work on the Warren Ellis book “Trees” by Image Comics. The likeness is uncanny. The style is being practiced more often now as it’s slightly more modern, thus making it a little hipper and lending itself to be easier for characters in civilian clothes to rock the action scenes. 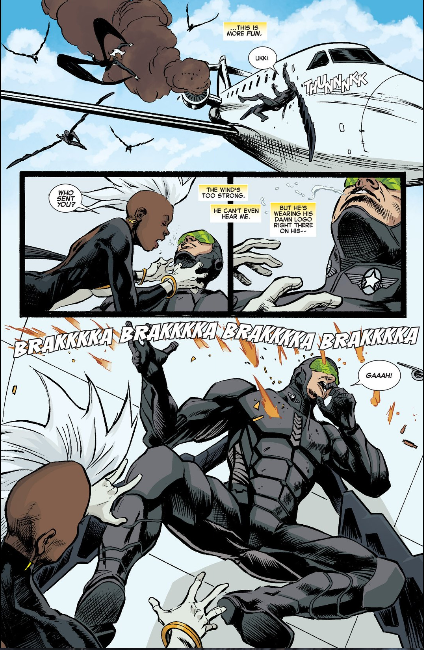 Nothing is overtly problematic in this issue. One point of contention may be that Storm, once back on the east coast and being arrested, is not in contact with her fellow X-Men. Many can appreciate the “realism” of the situation that as the plane was going down, that there was no real time to call in the other X-Men, or at the very least Nightcrawler, who could then teleport her tired body from danger. It’s a bit obligatory to point out, but the final two pages may feel like a convenient segue into a new story arc. For many, there’s nothing wrong with that. Storm’s story is hardly over and this series makes a good call in refusing to take it easy on her.

Easily one of the strongest characters in Marvel’s line-up, Greg Pak has turned this series, almost out of the gate, into a sleeper hit. The more you miss, the more you’ll regret it, so place your orders for issue #7. 2015 is going to bring a whole new boat of problems for our favorite Windrider starting with clearing her name!

Summary: Ororo Monroe is an icon for many readers, both as a hero and a symbol of diversity. Writer Greg Pak certainly knows this and writes the character to her strengths and plays off her faults. This is the most relatable and enjoyable Storm has been in a long time.