She-Hulk was allegedly created when Stan Lee started feeling nervous that DC or another comic company might try to cash in on a female version of the Hulk and he decided to rush ahead and do it before another company could get the chance. Inauspicious beginnings to be sure, but from this, the Savage She-Hulk series was born. The first issue of the series was written by Lee, though he quickly departed, having given Jennifer Walters an introduction that was thematically similar to Hulk stories of the time. Taking a format similar to the Hulk TV series, each issue was episodic, building to the story’s eventual conclusion with issue #25.

The Jennifer Walters we’ve come to know and love today is a far cry from her early appearances, which, for the most part, lacked direction and the quippy sense of humor we’ve come to expect from our She-Hulk. Still, there’s something to be said for the unmitigated anger that She-Hulk brought to the page, from the beginning mixing Walters’ intelligence and heart with a healthy dose of justified rage. Women experiencing anger as a good thing is a rarity in the media, and that’s part of what makes the early run of She-Hulk compelling despite its flaws. 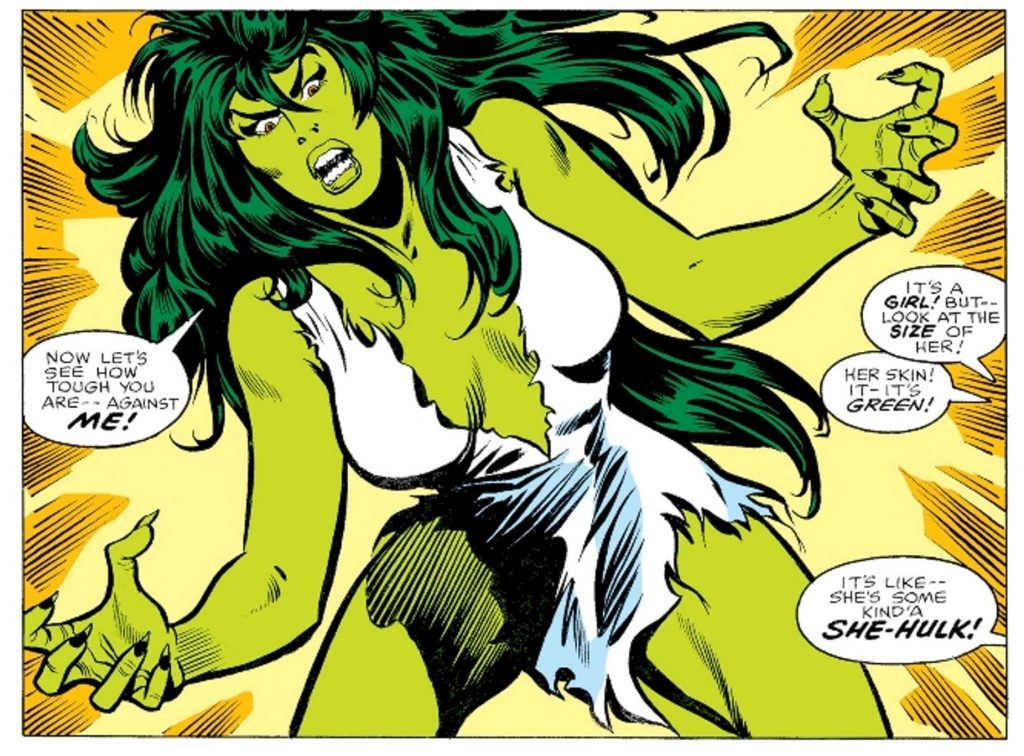 The set-up of the first issue has little influence on the direction that Jennifer Walters’ life would ultimately take, but it does set the general tone of the series. Bruce Banner is on the lam and he shows up at random to catch up with his cousin Jennifer, who is delighted to see him. At this time, she’s a fresh-faced lawyer right out of school, and, though troubled, Bruce is happy for her. They enjoy a brief visit, but, sadly, Jennifer is shot by hired hands from Nick Trask, the crime boss who is the main villain of her first arc. She is defending a man against him in court, and this is enough to condemn her to death at the hands of hired assassins. Banner gives Jennifer a life-saving blood transfusion before booking it out the door to avoid capture.

Yet, that’s not the end of the line for Jennifer. Trask’s men return to kill her while she’s being treated in the hospital, and their aggression triggers her transformation into the She-Hulk. She makes quick work of the men, which only raises Trask’s ire. He repeatedly sends new hired hands in hopes of taking her out throughout most of this series and is the major moustache-twirling villain for Jennifer’s first arc.

This series introduces a number of supporting cast members that are unlikely to see the light of day again anytime soon, and most of them (thankfully) drop off by the end of this series. To begin with, Jennifer’s only female friend of the original run dies in the second issue, somewhat comically in retrospect as Jennifer tearfully pledges to never forget her (we never hear about her again). Then there is Jennifer’s childhood friend Zapper, who is highly controlling and harbors a not-so-secret crush on her. Zapper shows up regularly where he does not belong to attempt to “nice guy” She-Hulk into falling in love with him, which, strangely, does work in the end as they couple up in the final issue.

Another is Richard Rory, a stand-in character for writer Steve Gerber who somewhat bafflingly appears in this series as Jennifer’s unemployed romantic prospect before she ultimately chooses Zapper over him. Though these two play a huge role here, they are seldom mentioned going forward. Jennifer’s father shows up as the Thunderbolt Ross of this book, raging a campaign against the She-Hulk without realizing that she is, in fact, his daughter. Finally, one of Jennifer’s professional peers is a man named Buck who drives a Porsche and wears translucent blue sunglasses while constantly putting Jennifer down for her gender. This is not the greatest supporting cast, we have to admit. 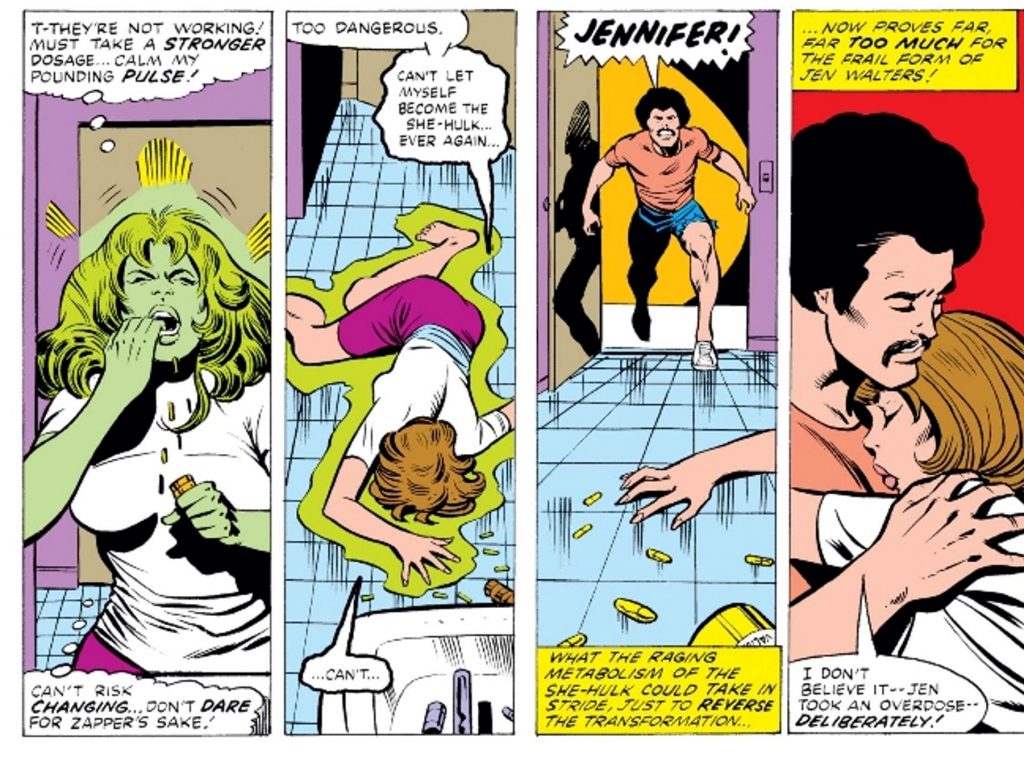 Tonally, the She-Hulk series struggles to find a foothold. In these early days, Jennifer isn’t a particularly emotionally strong character, and she spends most of her debut run at the whims of the men around her. Bruce’s story takes up the first few pages of her first issue, and his guilt and fear are the focus of the story all the way up until the moment she changes into She-Hulk. Throughout this first series, the love square between her, She-Hulk, Zapper, and Rory consumes an inordinate amount of page space that could have been better spent developing her character. This isn’t abnormal for the time, but looking back, it is still a glaring mistake to focus on comparatively uninteresting male characters like Zapper and Rory in lieu of telling us more about Jennifer’s inner world.

The villains are generally weak (the early days of the still-running feud between Titania and She-Hulk being one strong exception), and most of the fights, while occasionally quite fun, aren’t anything that couldn’t be read in any general Hulk story. This doesn’t necessarily make the series unreadable, but low-stakes villains do prevent the book from evolving into something more interesting. That said, there are still plenty of incredibly engaging moments littered throughout the series. Appearances by Man-Wolf, Valkyrie, Morbius, and Hellcat later in the run make for some classic Marvel storytelling, easily as good as anything else on the stands at the time. 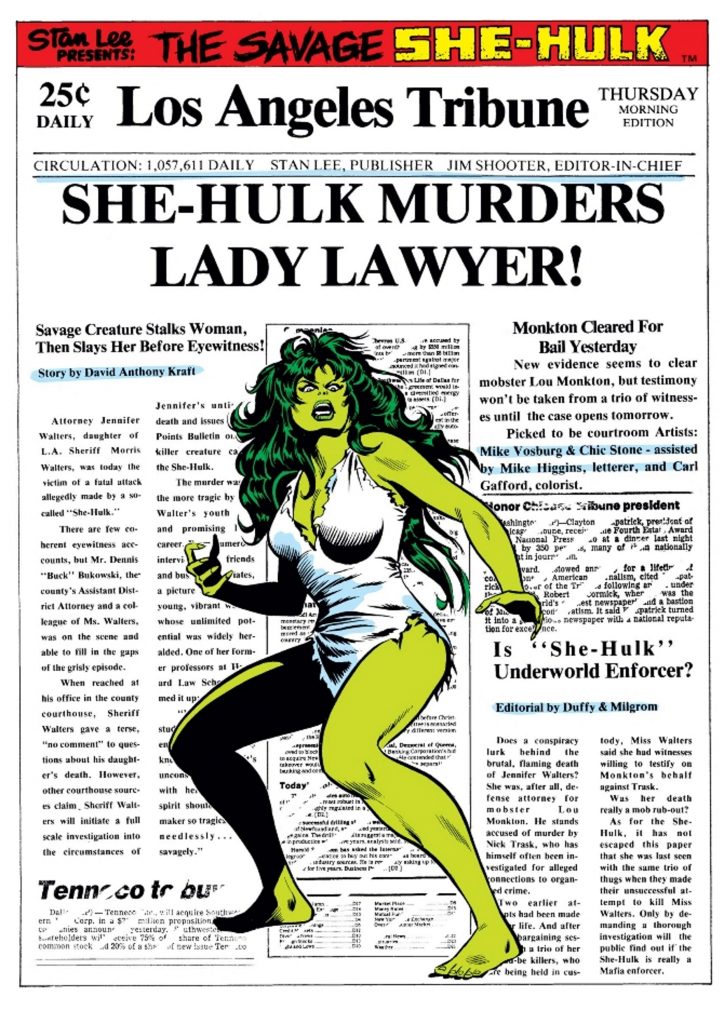 Importantly, this is a time before Jennifer had been reimagined by a number of creators to be the fun-loving hero that we know her as today, so she struggles with anger and insecurity all through the book. This is not necessarily a bad thing as it is nice, when put in context to her later appearances, to see this emotional depth underneath her current quippy, confident persona. Indeed, the most important development in this series besides her transformation into the She-Hulk is that, by the final issue, Walters has decided that she infinitely prefers herself as She-Hulk, that her transformation was in fact a good thing. This moment of acceptance could have come about twenty issues earlier than it does, but it’s still monumental for Jennifer’s character development. By the next time we would see her, she was a woman changed, embracing her life as a hero and a lawyer with equal fervor.

These early She-Hulk stories might not be as fulfilling as we’d like them to be, nor do they particularly indicate the emotional, vibrant character we would soon come to know. Yet, they are an artifact in time if nothing else. Regardless of misspent pages focusing too heavily on the men in her life, there are still some character beats that genuinely resonate. Though Jennifer is a very different person today, it’s important to note that this series doesn’t directly contradict her later characterization. Rather, this is Jennifer’s rocky beginning, when she was lost and somewhat helpless to understand what was happening to her, and reaching out to people that couldn’t hope to truly support her through her journey. She sheds this cast quickly, as many of us shed relationships that no longer serve us in life, and she goes on to become a woman in control of her own destiny in ways that we could never have imagined reading these first issues. Though the series falls short in some ways, it is the foundation behind one of the greatest Marvel characters. In the moment, The Savage She-Hulk must have been underwhelming, but looking back, in context of the greater story of Jennifer Walters, it fits.