The ‘Secret Wars‘ trailers have included several teasers for epic events.  But few are as exciting as the advert for ‘Planet Hulk‘…

What is Planet Hulk?

In 2006, Greg Pak wrote what is viewed by many as the definitive modern Hulk story.  The Illuminati, a secret organisation of the most influential figures in the Marvel Universe, viewed the Hulk as too dangerous to remain on Earth; and so they chose to exile the Hulk to a paradisical planet.  Naturally, it went catastrophically wrong, with the Hulk landing on Sakaar.  This was a brutal world that challenged him like never before, and the Hulk wound up a gladiator in an arena, ultimately escaping and leading a popular uprising against the Sakaaran ruler.

‘Planet Hulk’ drew to a climatic end with a malfunction on the ship that had brought Hulk to Sakaar; this destroyed the world that the Hulk had built, even killing the woman he had loved.  This devastation was the trigger event to ‘World War Hulk’, in which the Hulk sought revenge against Earth’s heroes.

The story is so fondly viewed that, after Mark Ruffalo’s performance in ‘The Avengers’, fans desperately hoped that Marvel would try out a third Hulks movie, based on this concept.  Kevin Feige nixed the idea, pointing out that it was useless finding a good actor to play the part of Bruce Banner if you then produced a movie that never featured Bruce Banner.

That being said, the advertising image for ‘Secret Wars’ looks very different.  Rather than adhered strictly to this event, it seems that the territory of Battleworld is actually a world of Hulks (referred to as Greenland on the Battleworld map), perhaps where a gamma-based war has turned all of humanity into Hulks. 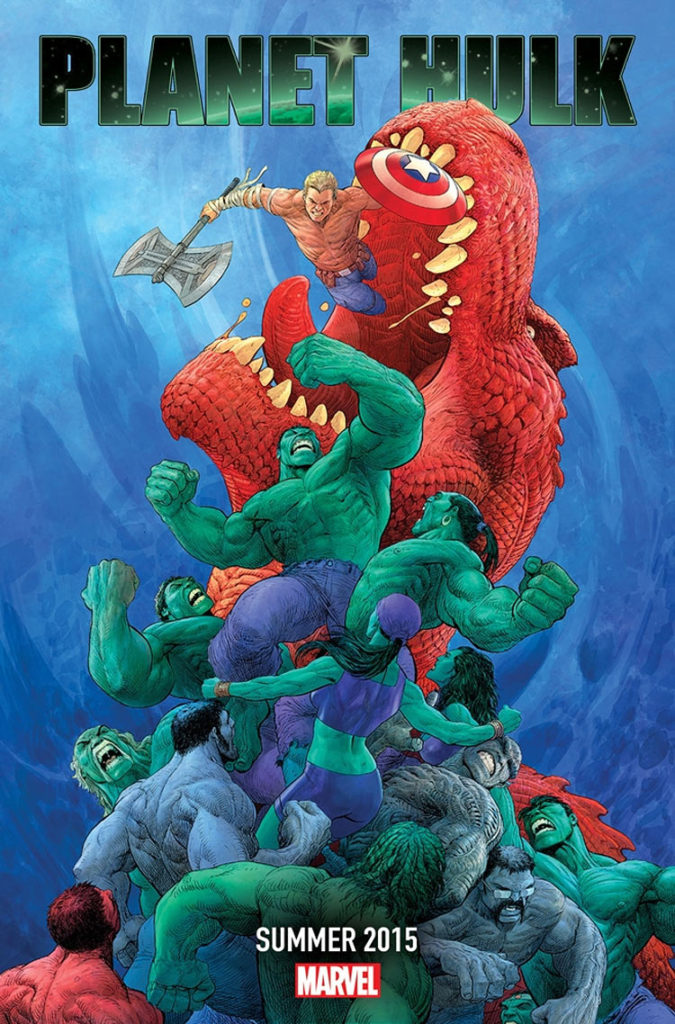 Most curious is the role of a barbarian-like Captain America, who, I speculate, was saved from the gamma by being frozen in the ice during the gamma war, and has awoken to a very different world…

What does this bring to ‘Secret Wars’?

Simply put, a whole lot of Hulks.  It remains to be seen how these Hulks will be characterised; will they shift between human and Hulk?  And will they retain any measure of their personalities?  Most intriguingly, these Hulks are next to the Maestro, who would most definitely view them as either a threat or as a weapon.  And if Battleworld is also populated with refugees, then who knows how those refugees would take to being stuck in Greenland…

And the role of this reality’s Captain America is similarly mysterious.  As we’ve never seen this reality, only time will tell…