Rocket Raccoon is hands down the most fun comic book you can find on the shelves today. The book stars Rocket Raccoon and Groot while perfectly capturing their friendship. It understands what it is and doesn’t take itself too seriously, like so many books out there. From front cover to back the book keeps a consistent tone which is distinctly different from any other Marvel book. The cohesiveness of the book is in part due to the fact that both the writing and art is done by Skottie Young. While Skottie Young also does the cover art, he did need some help from Jean-Francois Beaulieu for coloring and Jeff Eckleberry for lettering.

As many of you probably know there is a Guardians of the Galaxy (Rocket Raccoon’s main team) movie in theaters now. If you just saw the movie and don’t want to catch up with the 17 issues of the current Guardians of the Galaxy comic, both Rocket and the Legendary Star Lord book by Sam Humphries and Paco Medina may be a good place to start. These two books are only two issues into their run and are characterized very similarly to their big screen counterparts. 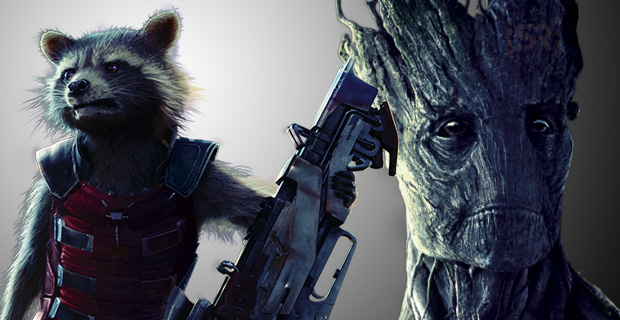 For those of you who read the first issue you know that at the end of the last issue Rocket Raccoon turned himself in to some sort of space police force. They were hunting him down for murders committed by a different Raccoon who walks on two legs. Sadly with various accounts of him claiming to be the only of his kind left in existence they didn’t buy it. We also find out that Rocket’s being hunted by a group of his mad ex-girlfriends.

The story opens with a great interrogation scene that ends with Rocket asking to be put in jail. Once they fulfill his request we get into the biggest chunk of the story which is Rocket and Groot stuck in jail. In classic Rocket style, they soon break out montage style (more on that later) and then enlist some help from Macho Gomez to get into space. We then get some aimless flying and Lost in Space jokes before next issue’s threat is found. 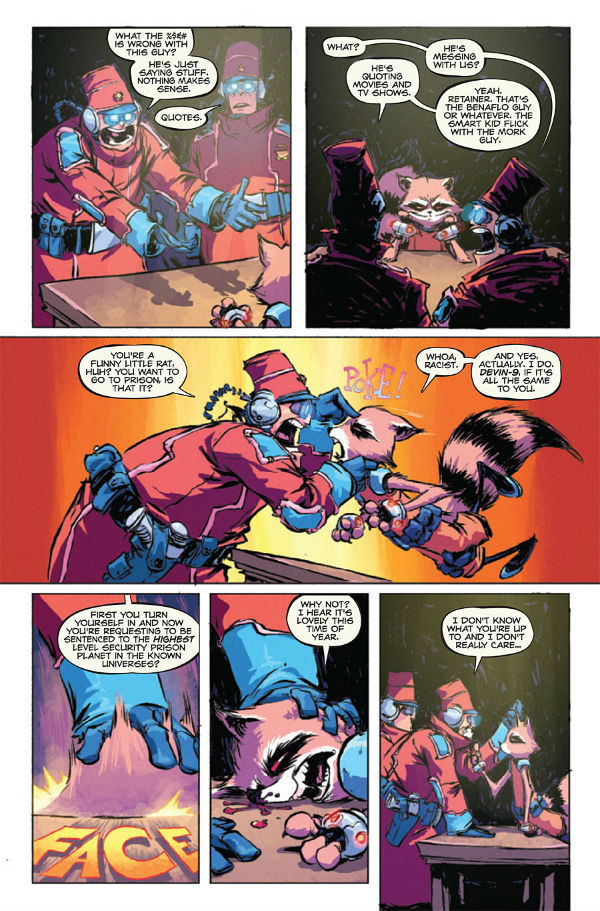 The writing here done by Skottie Young is rather impressive, considering that he hasn’t really done much outside of art before. I think that my favorite part of this book is the humor laced throughout. He has a real skill for balancing the wit and snark of Rocket juxtaposed with the goofiness of characters of Macho Gomez, the league of mad ex’s and his cartoony style. This ends up giving us a book that works on multiple levels. It allows for enjoyment from all people because even if you miss the references and wit it’s still fun and silly. The other thing that I think Skottie Young has done well is keeping this book in line with the Rocket in the Guardians of the Galaxy comic.

While the writing in this comic is good, for me it’s the art which really steals the show. Seeing as Skottie Young is an artist first I would expect any less from him. I’ve loved Skottie’s work since I saw him draw every Marvel baby out there. I was a little worried that his interiors may not be up to par but almost every panel in this comic could be blown up into a poster. Speaking of posters, the center page here is a two page spread break out montage which was a little confusing but also beautiful. My favorite part of the art is Skottie’s character design.

If you can’t tell yet, I’m a huge fan of this book and these characters. This captures everything that I love about Rocket and Groot and should be bought by everyone who reads Guardians of the Galaxy. I think that this could be the start of Skottie Young’s established writing career and hope that this book continues on for a long time.