You are here: Home / Featured / Previously On #46: The Green Lantern #1, Image Removes DRM-Free Comics, The Pleasures of Being Wrong!

This week I review the hotly anticipated The Green Lantern #1 by Grant Morrison and Liam Sharp, analyze Image Comic’s decision to remove DRM-free download options, and celebrate being wrong about Isola volume one!

Where to find: The Green Lantern #1

When you have the pedigree of comic book creator Grant Morrison (for my money, one of the best comic book writers of all time), the launch of a new ongoing series within the DC Universe is a big fat deal. The announcement of Morrison’s creative partnership with rising superstar Liam Sharp is one of the most exciting things to happen in comics in 2018, and even if Morrison’s complex cosmic chaos has left you cold in the past, The Green Lantern has to at least spark a degree of curiosity.

As a result, it’s hard to separate the potential of The Green Lantern #1 from the actual delivered product. Judging this series on the pure innovation of its first issue is criminally short-sighted. Morrison’s history on Doom Patrol, Animal Man, Superman, Batman, Seven Soldiers, Multiversity, JLA and others I’m likely missing off-hand means I’m in for the long haul more or less no matter what. Nonetheless, it’s not like Morrison has remained anywhere near infallible. I’ve been disappointed with his work on Wonder Woman: Earth One

has never satisfied the way I expect it to.

With that in mind, Green Lantern #1 feels like an introductory success, showcasing Morrison’s uncanny ability to wield manic alien tongues like a fluent speaker, and cementing the overall focus on the Green Lantern Corps as the space cops of the DCU. The toughest sell remains convincing a broad audience that Hal Jordan remains a compelling lead lantern, which remains a work in progress.

There’s a definite advantage to trusting creative pedigree, with an extended opening sequence throwing readers into the thick of unknown members of the GL corps apprehending dangerous criminals. The luck-generating macguffin at the center of the villain’s escape is less conceptually interesting (perhaps this stems from a recent reread of the “Felix Felicis” portions of Harry Potter and the Half Blood Prince), but Morrison’s insertion of a Green Lantern virus is beautifully inventive (as are Sharp’s designs of this completely alien landscape).

The transition to Hal Jordan’s narrative insertion is smooth, and perhaps most impressively, works shockingly well as a continuity light explanation of the character. As Morrison has said in interviews, his Jordan is a wanderer, bouncing from Earth job to job and squeezing in major space police activity in between. So far, The Green Lantern #1 plays minimally with recent DC Rebirth era Green Lantern Corps developments, meaning a slight familiarity with Morrison’s style and the Corps is all that’s required to jump in.

I remain gleefully excited about the continuation of this series, and am hoping for a long partnership between Morrison and Sharp shaping the DC cosmic landscape for years to come.

When Image announced their plans to allow DRM-free downloads of comics through their own website, it was actually quite a point of differentiation within digital comics.

For all of the strong features that helped make Comixology the biggest player in digital comics retail, the Amazon-owned giant was – at least at the time – only allowing purchase of issues within their own app platform. This meant that you didn’t really “own” any files, and in the event that the site servers crashed (which did famously happen), nobody could access any of their purchased comics (no matter how many they owned).

Image offering DRM-free comics (DRM stands for digital rights management, and effectively means the consumer’s file sharing/access is limited) was frankly a bold and appealing stance. The main reason to avoid DRM-free issues is essentially ease of pirating or sharing product, and this fear seemed to be enough to keep most major publishers at bay. In many ways, it still does.

Image’s recently announced removal of this option does not need to indicate the “failure” of this experiment. As a matter of fact, since Image’s prominent foray into the offering, Comixology also started offering their own DRM-free issues for aligned publishers and creators.

What this means for you:

I’d also be a little surprised if this decision was made in response to fears of comics piracy. Image is visibly confident in sharing their comics across platforms, whether it’s Comixology Unlimited, Hoopla Digital, or even their willingness to provide advance review copies to press (after all, we must all be weary of any club that would stoop to having me as a member!).

Plus, when you consider the insane prevalence of pirated comics, there are much more pressing concerns than purchased books possibly ending up in states of misuse.

Given all that, my theory is that the offering through the Image store simply cost more than it was worth to maintain. Each issue was offered in the format variations of cbz, cbr, pdf, and ePub (which I am still convinced is entirely fictional). Way back when, the drm-free availability of Image titles, coupled with their insane 50% off Holiday sales, led me to explore the best ways to read drm-free comics. Now, it’s mere window dressing.

For nostalgia’s sake, I’m a little disappointed to see the offering go. That said, the purchase behavior isn’t as necessary as it once felt. 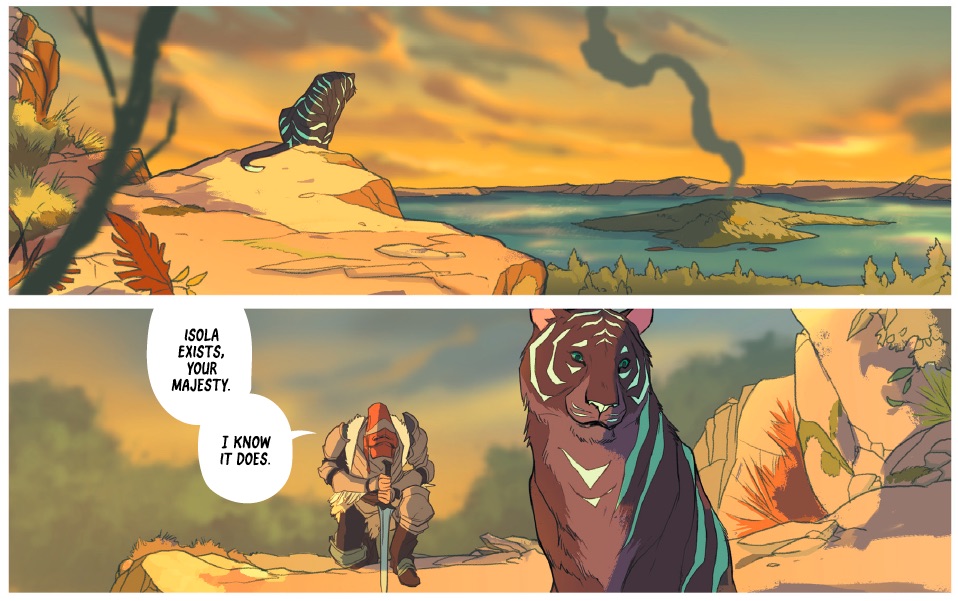 My love is a bit counter-intuitive this week, but it’s the rewarding experience of being proven wrong about a piece of art. In this case, the learning came from a reread of Isola

Not that I’m eagerly looking for opportunities to admit I’m wrong (hang on, my wife keeps repeating “Yeah, I’ll say” and I can’t get her to stop), but there is a lot of value in reappraising material that may have been prematurely written off. I’d never be a fan of All Star Superman (or most Grant Morrison comics for that matter) if I hadn’t returned to the source material with new perspectives, new backgrounds, and an open mind.

After good buzz, I gave single issues of Isola as released, but was generally underwhelmed. I could tell Kerschl and Msassyk’s art was popping off the page like little else I was reading, but the narrative just didn’t pull me in. I find myself in a semi-endless (privelaged) state of keeping up with comics these days, and it’s difficult to pause and let a book I’m not loving really sink in. Isola suffered as a result – quickly, it was off my pull list.

and playing through Shadow of Colossus

In the case of The Abominable Charles Christopher, I realized how much storytelling Kerschl was able to do with limited (or no) dialogue, which is crucial to enjoyment of Isola. Fletcher’s prose is deliberately restrained throughout.

This atmospheric intimacy synchronized perfectly with my experience playing through Shadow of Colossus for the first time, a game famously marked by quiet sensual discovery followed by explosions of thunderous action.

In short, Isola is not for the impatient, and that’s exactly what I was upon my first reading. I still have doubts about the narrative, but the feel of this comic, with Kerschl and Msassyk’s impossibly gorgeous landscapes and creatures, is something to behold. Well worth a read – or two!