.
You are here: Home / Featured / Original Sin #6 Review! Who Pulled the Trigger? (We Still Don’t Know)

The Marvel summer event book Original Sin continues in this week’s offering Original Sin #6. With only 2 issues left in the series we still have many unanswered question in this mystery thriller and seem to get 2 new ones every time another is answered.
This issue was written by the comic superstar Jason Aaron along with the artistic styling of Mike Deodato. This series is the first event title that Aaron and Deodato have ever headed up and so far they’re doing a great job as far as events go. They do this in collaboration with the coloring of Frank Martin, VC’s Chris Elipoulos lettering and the cover artist Julian Totino Tedesco.

And The Plot Is

The issue begins by answering a question totally skipped in issue #5, which is what happened to Dr. Midas along with Exterminatrix. While we don’t get much, we at least get some idea as to what they’re up to. Although at this point any thoughts to what they’re up to is just as speculative as ideas about how this story will end.

We then return to our regularly scheduled program, Fury talks at a wall of interesting characters, doing nothing. During this we see a brief interaction between Fury as well as learning the purpose behind is prolonged story time last issue. During this we see the Avengers trying to figure out what’s going on and why they’re so out of the loop. With tensions rising and no answers coming anytime soon, a fight ensues which ends with a full page “WHAT THE SQUIRREL GIRL?” moment, in classic Original Sin fashion.

People Who Make the Money

As I stated above, this issue is written by Jason Aaron who has risen to superstar status in the comic book industry, with his exceptional work on Thor: God of Thunder as well as his growing indie presence. With credentials like that the expectations that I have for him are not easily fulfilled and sadly this book isn’t quite there yet for me.

My problems with what he’s done in recent issues is that he’s completely eliminated the interesting and unexpected team ups which were a personal highlight for me (such as Punisher and Dr. Strange hangin’ out in another dimension). Without these team ups providing cool bits of character and great dialogue, I feel as though I’m just reading for the last page surprise. What I do like is that Aaron is providing me with a cool update to Nick Fury that makes him seem somewhat interesting once again (sadly, he does what should have taken 3/4 of an issue in almost 2 full issues), since Samuel L. Jackson stole his place as S.H.I.E.L.D superspy.

The art here is done by Mike Deodato who largely found his fame with Bendis back in New & Dark Avengers. Unfortunately though I feel his impressive work falls a little short in sequential storytelling and fails to convey much motion when it isn’t an action sequence. Making these conversations look a little more like a string of really pretty pictures instead of a cohesive scene. 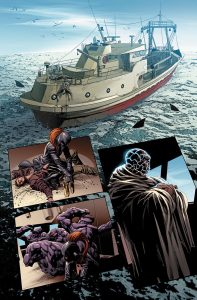 Similar to the last issue of Original Sin this one felt slow and I feel like five and six really should have just been one 40 page issue instead of taking just a departure from the story. Even though these last two issues have been disappointing I still trust that Jason Aaron will give me a quality ending to this story while also giving Nick Fury some kind of relevance (or death) in the current Marvel universe.

A weak issue in what started out as a pretty interesting story. Good enough to keep up the interest that I already had but fails to present new and interesting reasons to get the issues. At this point I assume most people reading want to find out but, if you were looking for an out, I might take it here.