Our last installment showed us the first appearance of the man called Cable–baby Nathan Christopher Charles Summers. Not only that, but his daddy, Cyclops, received an early Father’s Day gift–a killer beatdown by a powerless Storm during their Danger Room faceoff to determine which of them would lead the X-Men! Uncanny #202, written by Claremont with art by Romita, Jr and Al Williamson, opens with his other child–Rachel Summers, the X-Men’s new Phoenix–working out some issues of her own.

Now, this issue is a Secret Wars II tie-in, and as such, features the Beyonder. He’s appeared in a few X-Men comics after the first Secret Wars–he ordered a sandwich from a deli a few issues back–but I’ve never really been into him, or the Secret Wars. Part of this is because this book came out in 1986, and I was four. Now, I didn’t read the comic when it was new, but I did get into these around the time I was twelve or so, and at that time in my life, I didn’t care about any comics at all unless they were X-Men related. So the whole cosmic side of the Marvel Universe still doesn’t appeal to me much even to this day–or the mystical side, apart from a little Ghost Rider here and there.

But Rachel…Rachel was one of the best parts of the early 80s X-Men, in my opinion. Her origin, her powers, her struggle to relate to a whole new timeline, not to mention the versions of her folks living there, all made her a great character. When Marvel launched Excalibur, she was one of my favorite characters and one of the only reasons I bought that book for a few years. The last few issues of Uncanny have given Phoenix a lot of facetime, and this one is no different. First, we get a big splash page of Rachel, Phoenix-ed to the gills, announcing her intention to kill the Beyonder to Rogue, via a pre-recorded message. We don’t learn why Rogue was in Rachel’s bedroom; as usual, Claremont does a good job of skipping right to the good part when opening a comic. Logan, of course, just wishes he could be there for the kill, while Nightcrawler, who had discussed his feeling about the Beyonder with a priest in Uncanny #196, expresses his doubts about what good either Phoenix or the X-Men would do against someone as powerful as the Beyonder. 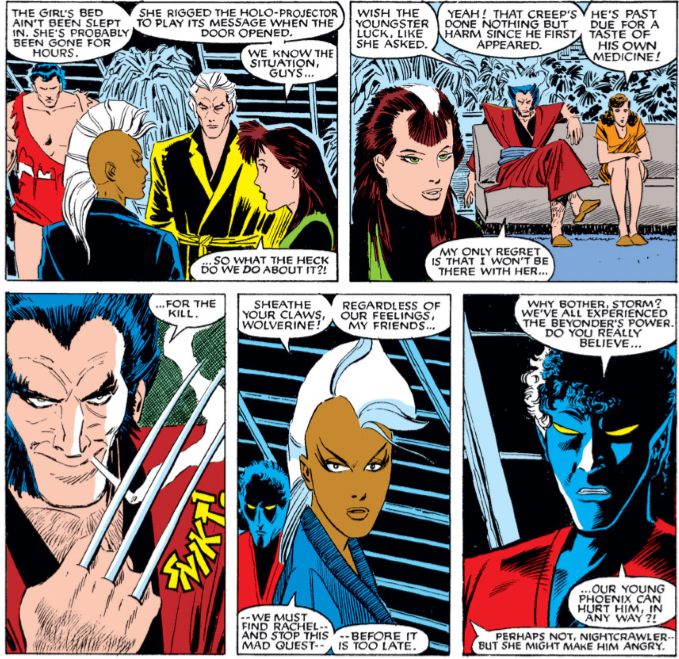 They decide in the end that they have to at least track Rachel down to see what happens, if nothing else. So Magneto hops on Cerebro and tracks her down. Now, I’m all for not getting bogged down in details–the earlier bit with Rogue in Rachel’s bedroom didn’t bother me, for instance–but it always troubles me when I see a character doing something he shouldn’t be able to do, like Magneto on Cerebro. Magneto isn’t psychic! Wolverine isn’t terribly impressed with Magnus, either, and tries to pick a fight. Magneto again demonstrates he’s turned over a new, pacifist leaf, by not taking Logan up on his offer at the moment.

We cut to the Beyonder, right before Phoenix shows up, on Alcatraz. When she does get there, she hits him with the full force of her power at least twice, destroying the surrounding land but not even ruffling the Beyonder’s shirt collar. They have a bit of a philosophical discussion, then the Beyonder makes her relive a tragic experience from her future timeline, an escape from an internment camp that resulted in the death of Future Shadowcat. He then gifts her with a measure of his own power–enough for her to kill him, if she so desires–and offers he a choice between killing him or saving the X-Men, who’s Blackbird aircraft he’s just transported into the airspace over Alcatraz. Since the aircraft is spinning out of control, Phoenix makes the right choice. But there’s more! As she’s assessing the situation, a Sentinel surges out of the water surrounding the island and attacks the aircraft! 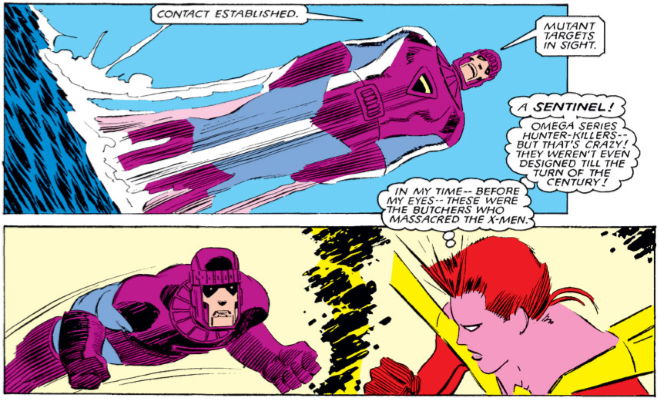 Rachel senses her fellow X-Men’s thoughts–they’ve been scattered throughout the city of San Francisco by the Beyonder, though he left Storm in the cockpit of the plane–just as Storm detects multiple Sentinel signals approaching those positions. Rachel has another choice to make, but it doesn’t take her long to make the right one. Rachel races off to help the rest of the team, while Storm remains with the plane to deal with her lone Sentinel. She manages to damage the Sentinel’s computer brain with the Blackbird’s engine blast, but ends up trapped herself in an uncontrolled re-entry through Earth’s atmosphere.

Rogue, Magneto and Wolverine find themselves fighting a Sentinel, with poor results, while also dealing with a crowd of people, several of whom have made skin-contact with Rogue, providing her with an incredible distraction. Rachel shows up just in time to help them defeat the robot, while Magneto saves Storm and the Blackbird with his magnetic powers. At the same time, Colossus, the unlucky sonofagun, faces off with a Sentinel of his own, all by his lonesome. Shadowcat saves him by pulling him below ground, and Rachel arrives, again, to administer the killing blow to the robot and concluding the battle. I’m not sure why at this point, but Nightcrawler was missing from the fight; the last time we saw him was during the scene with Magneto and Cerebro, and no explanation was given for his absence.

And finally, we come to the final page of the story, where it all breaks down, in my opinion. Rachel rolls up on the Beyonder, who has the unmitigated gall to congratulate her on saving the X-Men–from the mess he himself created! Rachel slaps the crap out of him, which is the best part of this whole Beyonder interaction, as far as I’m concerned. But really, it just puts a fine point on what I don’t particularly like about characters like the Beyonder. Phoenix was never going to end him. And while it was an enjoyable story for Rachel fans, it was really just a bunch of “Rachel has to make a tough choice, then shows up to win all the fights” moments. Claremont could have told the same story using the machinations of a villain that really mattered.

However, I don’t blame him. Secret Wars II was going on, and editorial almost certainly demanded a Beyonder story. For the purposes of showcasing Phoenix and trying to develop her character a bit, and for including things like Nightcrawler’s previous crisis of faith and Magneto’s continued earning of the X-Men’s trust, I call this an overall win from a creator who likely had his hands tied a bit with this one.