After last week’s lackluster (in my humble, and frequently-refuted, opinion, of course) issue featuring the Power Pack, Claremont gets us back on track with an X-Men issue that’s about…you know…the X-Men. Uncanny #196, with art by Romita, Jr. and Green, opens with Professor X teaching, not his mutant proteges, but a psychology class at Columbia University. His telepathy kicks in and he “hears” one of his students thinking about killing someone. Despite the efforts of the Morlocks’ Healer, however, he’s still not completely recovered from the beating he took a few issues back, and he doesn’t feel capable of scanning the entire lecture hall to figure out exactly who’s plotting murder in their mind. Of course, that doesn’t mean Charles is throwing in the towel.

Meanwhile, in Africa, we join up with Ororo, enjoying some solitude on the Serengeti plain. After the lion she’s admiring from a distance comes down with a severe case of bullet-in-the-chest, Storm herself is taken down as well. Her assailants are revealed to be the Strucker twins, whom we (and Ororo) first met in Uncanny #193. They leave her for dead, after the standard villains’ discussion of bribes and death threats for the hapless few unfortunate enough to witness their crime. Back in New York, we join the X-Men, seated around a table in a local eatery. Xavier, alongside Magneto, is telling the team he wants them to look into the probable murderer on the Columbia campus.

Since Charles has been keeping his poor health secret from his students, he’s forced to feed them a line of bull when Shadowcat points out the obvious answer: a telepathic scan. This sort of behavior is typical of Xavier no matter who’s writing him, or in what era of X-Men we’re reading. Despite the high regard he’s held in by all generations of his pupils, Charles never fails to lie to the X-Men on a regular basis, whether it’s his arranged replacement by the Changeling back in the sixties, this incident here, the entire Onslaught event (for which certain excuses can be made, I understand) in the nineties or his covering up of the deaths of an entire team of X-Men, in between the capture of the original team by Krakoa and their rescue by the All-New, All-Different team.

Rachel leaves the table for a moment after observing a strange individual walking up to the deli counter. They speak briefly; the new arrival, though human in appearance, doesn’t seem to understand the concept of food. That doesn’t stop him from walking out with a sandwich without paying (guess he doesn’t understand the concept of money, either), giving us our second Nimrod reference this issue (the first was an offhand remark by the X-Men’s waiter several panels earlier; New Yorkers seem to consider the Sentinel from the future a hero). Kitty and Rachel talk briefly, with Kitty fairly certain the weird guy was none other than the Beyonder. Kitty being Kitty, though, her mind quickly returns to the mission at hand–specifically, the location of the X-Men’s current field leader, Nightcrawler, strangely missing from the informal mission brief at the eatery. It just so happens that Nightcrawler, devout Catholic that he is, is dealing with his previous encounter with the Beyonder, during the Secret Wars, by pouring his heart out to the local priest.

Several hours later, we see several shadowy forms slip into a Columbia building under cover of night. During the course of a brief, whispered discussion, they plant a device under what appears to be a teacher’s desk, crowing about how once it goes off–“The mutie’s good as dead!” Meanwhile, Rachel and Rogue have a conversation about Magneto while performing aerial recon of the Columbia campus and it’s surroundings. They have two different perspectives on the X-Men’s archfoe joining the team–Rogue, of course, being a reformed villain herself, while Rachel remembers the Magneto of her alternate future timeline as a hero and friend. The ladies then interrupt a mugging in progress, only to be told off by the young man they’ve rescued–who had been spraying anti-mutant graffiti on a wall before being set-upon by his attackers.

We then segue into Logan and Kitty sitting on some steps, discussing Magneto as well, with Logan coming down on the side of Magneto legitimately turning over a new leaf an Kitty wondering if maybe the Prof’s being fooled–she noticed how unwell he looked earlier. Kitty herself ended up not looking well for a couple panels, herself, as we’re shown something we’d probably never be treated to in a mainstream comic these days–Wolverine passing off his cigar when she asks to try a puff, something that works out extraordinarily poorly for Shadowcat. We’re treated to another such shocker by Kitty a few pages later when, after leaving Logan’s side to investigate a nearby building, she happens upon the culprits, several Columbia students she knows from her classes, is seized by one of them and called a “mutie.” She answers in kind by asking the student, a black man…well, we’ll let the panel speak for itself. I censored the word in the panel below, to keep things clean, but Kitty drops the one, true N-bomb to make a point about racial epithets and hate speech that we’d never see in an X-Men comic today.

Kitty is taken by surprise, pepper-sprayed and chloroformed before she can phase. Meanwhile, Rogue and Colossus join Wolverine on the steps and Rachel, Xavier and Magneto discuss the Beyonder in Xavier’s office. Ray senses the Beyonder’s presence, but in casting her telepathic powers out in an effort to pinpoint him, she triggers the device, which we now know had been planted under Xavier’s desk. The device amplifies her powers, overloading her mind and causing her to launch Xavier and Magneto through a window. This, of course, gets Colossus, Logan and Rogue’s attention. Rogue catches their airborne teammates while Colossus launches Wolvie through a window into the building, where he discovers Rachel. Rachel’s back in the fight though, and upon telepathically detecting Kitty’s distress, takes flight, arriving just in time to catch one of the students choking the life out of Kitty. Rachel goes berserk, attacking the perps with her telekinesis. One of them fires a gun, and Rachel, back in her Hound mutant-tracker persona from the future, turns the bullet right back around, racing toward the firer’s own head.

Of all people, this attempt to kill by Rachel, an X-Man, is thwarted by none other than Magneto, the last person any reader of the X-Men would expect to jump in on the side of a mutant-hating human. Over the next couple pages, we get a role-reversal that seems to bear out the faith Rogue and Logan placed in Magneto earlier in the comic, with Rachel raging over the attempted murder of the Professor, and blaming humans for her being forced to hunt mutants in the future and Magneto expressing regret over how he’s become a symbol and made mutants easier for humans to hate. In the end, Rachel allows the bullet to fall. The story ends with a brief internal monologue from the Beyonder, who had observed the interaction between Magneto and Rachel and feels he’s learned something–and can learn more by actually becoming human. I’ve never been really into the  Beyonder storyline from 80’s Marvel, but no long-time comics reader can deny the impact the Secret Wars had for decades to come, and even without the occasional foray this issue took in the direction of the Beyonder, Uncanny #196 is a perfect example of a time when X-Men comics were not only entertaining, but a thinking person’s entertainment. 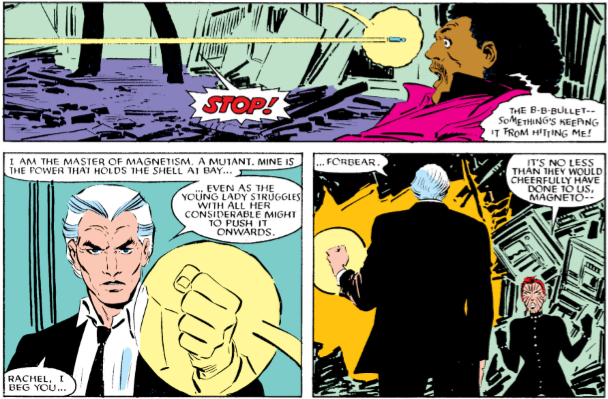