You are here: Home / Featured / My Secret Wars: Fighting Chronic Dizziness and Finding The Strength Not To Lose

The earth rotates on its axis every 24 hours, and makes a complete orbit around the sun every 23,934 hours (or ~365 days). This is rudimentary astronomy, yes, but the fact that we are perpetually spinning through space is a fact that came to shape my life more than I would have ever guessed.

The reason we don’t *feel* the Earth spinning is – amateur scientist alert! – the orbital speeds are constant. But imagine for a moment, that they were not. That every day, for perhaps 15 seconds, a sudden acceleration or deceleration occurred, so that you felt the Earth beneath you spin (ignore for a moment the Neil deGrasse Tyson voice in your brain telling you this would mean the planet would hurtle out of orbit!). And then those periods of acceleration began to grow. What once was an infrequent curiosity became at first daily, then hourly, then a seemingly never-ending occurrence.

From late 2015 through all of 2016, this was my reality. My world became a spinning nightmare from which I felt I could not escape. I was dizzy all the time. The sudden medical takeover of chronic dizziness was debilitating, physically, emotionally, and mentally. Without essential respites; some in the form of Marvel Comics, in family, and in the Chicago Cubs winning a World Series, I don’t know how I’d have made it through.

The earth’s rotation is constant. And nobody noticed but me.

I first saw a doctor about my unending dizzy spells in the fall of 2015, which given my absolute reluctance to see a doctor for virtually anything, means symptoms must have started 2-3 months prior. A headache here, a fuzzy buzzing between my ears and eyes there, nothing spectacular. A few moments where suddenly I felt the world turn, had to grab my desk or chair, and then 20 seconds later, a few deep breaths, and it passed.

Surely I could handle this. Dizziness was an Arrested Development gag starring Liza Minelli. Surely this would pass.

The initial forays into self-medication included the usual suspects (Tylenol, Excedrin) before progressing into Dramamine, Mucinex, vitamin D, heart pills, alternating allergy medicines… the list goes on.  Nothing really worked, and life carried on, commuting daily to Downtown Chicago, powering through a workday, swimming in a haze of breathless spinning at street corners and Chicago’s Union Station, as hundreds bustled by, none the wiser.

And so: Doctors. Over the course of 8 months, I saw a comical array of specialists, ranging from neurology, to ENT, to ophthalmologists, to – almost unquestionably – a number of medical professionals I don’t even remember seeing. If I ever took a medical survey asking to check all the types of doctors I’ve seen, I would undoubtedly lie by omission without even realizing. I tried chiropractors, Catscans, seizure medicine that left my entire body tingling like a hive of bees waltzed on my skin, and in the absolute low point, the most comically “Kick Me I’m a Nerd” glasses you could possibly imagine. Two frames of experimental prism lenses, literally ziptied together, one on top of the other, as the eye doctor assured me that wearing them all the time would correct my issue.

When you feel your ability at a ‘normal’ life slipping, what use is embarrassment?

When you see no light at the end of a tunnel, what spark do you reject?

I tried everything. And through all the doctors, and all the treatments, the only constant was this: Nothing worked. No one knew what was happening to me.

The world continued to turn.

. Partly because I loved the story, and partly because of my increasingly isolated life, I absolutely threw myself into the work, creating the most detailed annotated reading order in the history of Comic Book Herald.

I read *every* single issue and tie-in of 2015’s Secret Wars. When I told my local comic shop owner to put me down for the entire event, he looked at me like I just told him Jeffrey Dahmer was a hero of mine. Nonetheless, I read everything, and then I wrote about it, listed it chronologically in the story, and rated how relevant it was to the core narrative. Even as my confidence to drive myself places safely withered, lest dizziness overwhelm me on the road and cause an accident, I still found my way to the shop to finish the event.

Secret Wars (2015) is about the collapse of the Marvel Multiverse, after literal worlds collide (in events known as incursions) to the point only a few Earths remain. In the build to the event, Hickman wrote a series called New Avengers

, where the “smartest” and most powerful men in the world – Reed Richards, Tony Stark, T’Challa, Namor, Stephen Strange, Hank McCoy, Bruce Banner – are among the first to bear witness to the impending collapse of all Earths. They look at this calamity, and they take it in their own hands, and they take action, and they do everything they know how to prevent their own world from utter destruction.

But they still can’t stop it. Even with all their combined intellect and legacy of heroism, in Secret Wars #1 the final two Earths in all the multiverse, Marvel Earth-616 and Marvel Earth-1610, *still* come crashing together.

The heroes are helpless.

All things considered, there are much worse ailments and situations. Through obsessive Google-ing, I know there are even much worse examples of feeling dizzy all the time. My life was never in peril. I held onto my job. My wife was a rock of support.

But internally, I was destroyed. I didn’t feel safe driving unless it was an emergency. I had to pull over on the side of the highway after one particularly nasty spell left me shaking at the wheel of my truck. I’d always been anxious about social interaction, but now it was absolutely out of the question. All I felt comfortable doing was sitting in my home, alone, with my comics.

As the months passed, the worst of it was the encroaching dread that this wasn’t going away. That this might not get solved. This might just be my life.

I distinctly remember waiting for the train to the city in the winter months, when the Chicago cold bites at your eyes like they might freeze in place, and when the holiday season spurs the kind of emotions and depression that delay the trains more than any other time of year. And I remember thinking how much *easier* it would be to just step onto those tracks. I don’t think I was ever truly suicidal. I really don’t. But it was the only time in my life I ever felt like I understood. 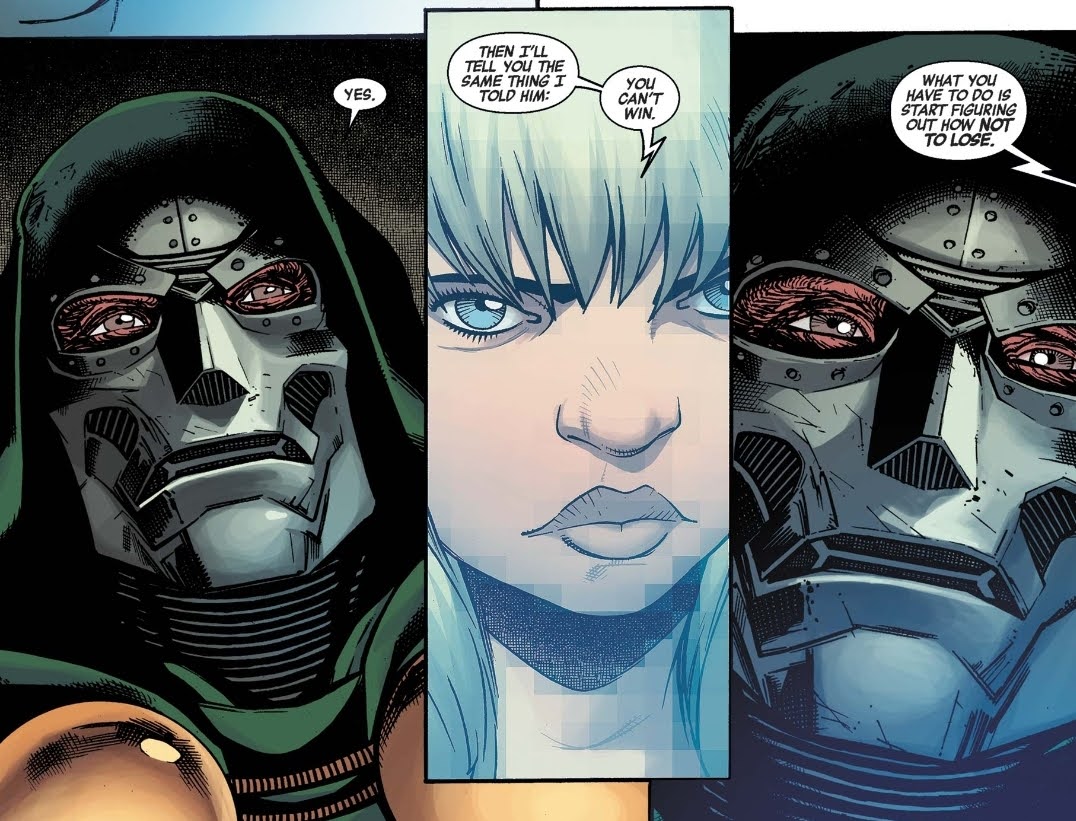 , and is repeated in New Avengers:

“You can’t win. What you have to do is start figuring out how not to lose.” ~ Valeria Richards

Very little summed up my life as I took stock of things quite like that. This was not a season of winning; but how could I position myself so I didn’t lose? What was good, and worth hanging on to, and fighting for? And what could I do to make that fight worth it?

So, I renewed my quest for solutions. I read books written quite literally for stereotypes of 1950s housewives on meditative techniques for dizzy spells, accepting the waves rather than fighting them, and finding my fear of the next onslaught subsided. I started physical therapy for stretching my neck and head, and found action I could take towards moderating severity.

I don’t know that I could say something like “These comics saved my life,” but certainly they kept me on the right side of sanity. Truly, they helped me figure out how not to lose. That was enough.

At the very end of 2016, staring down the duel threat of a January family vacation to Disney World (not my idea!) and my first-born’s due date the first week of March, I – not for the first time – pitched that my general anxiety may be the root cause of my symptoms, and my regular doctor prescribed anti-anxiety medication.

It wasn’t immediate, but over the course of a few weeks, the dizzy spells began to subside. They never completely evaporated (even now, they’re always on my mind, always looming), but for the first time in a year and a half, I had medication that made the world stop moving beneath my feet. Where weeks earlier I stood at a crosswalk in Chicago with my eyes closed and my hands gripping a railing like gravity would disappear any moment, I was suddenly amidst the thrashing throngs of a Disney World crowd damn near without a care.

My social anxiety ebbed and flowed throughout my 20s, but looking back, there were a number of factors that could have contributed to a physical manifestation of dizziness. For starters, our efforts to get pregnant with our first was a months-upon-months struggle that I won’t get into here. My day job was at a stressful low point. And obviously if you look at the American political scene, there are pretty clear events that took place in 2016 that were stressful. To say the least.

There was never a cure, and still, to this day, I’ve never received a proper diagnosis. But nearly 5 years and 3 kids later, I’ve found an equilibrium again. I have a life on my terms that I couldn’t be happier with.

The world spins, and I am aware, but I am no longer bound to its pull.

Postscript: If you find yourself struggling with similar issues, please don’t hesitate to reach out in the comments here, or elsewhere. I do not promise answers, but I can speak to my experience, and listen.

“I learned that the difference between living and dying is managing fear. Not being so afraid of losing the things you love that you hold them too tight. I used to believe in universal contraction. Entropy and the end of all things. Well, I’ve changed my mind. I’m letting go. Because now I believe in expansion. I believe we endure. Don’t you see? Everything lives.” ~ Reed Richards, Secret Wars #9 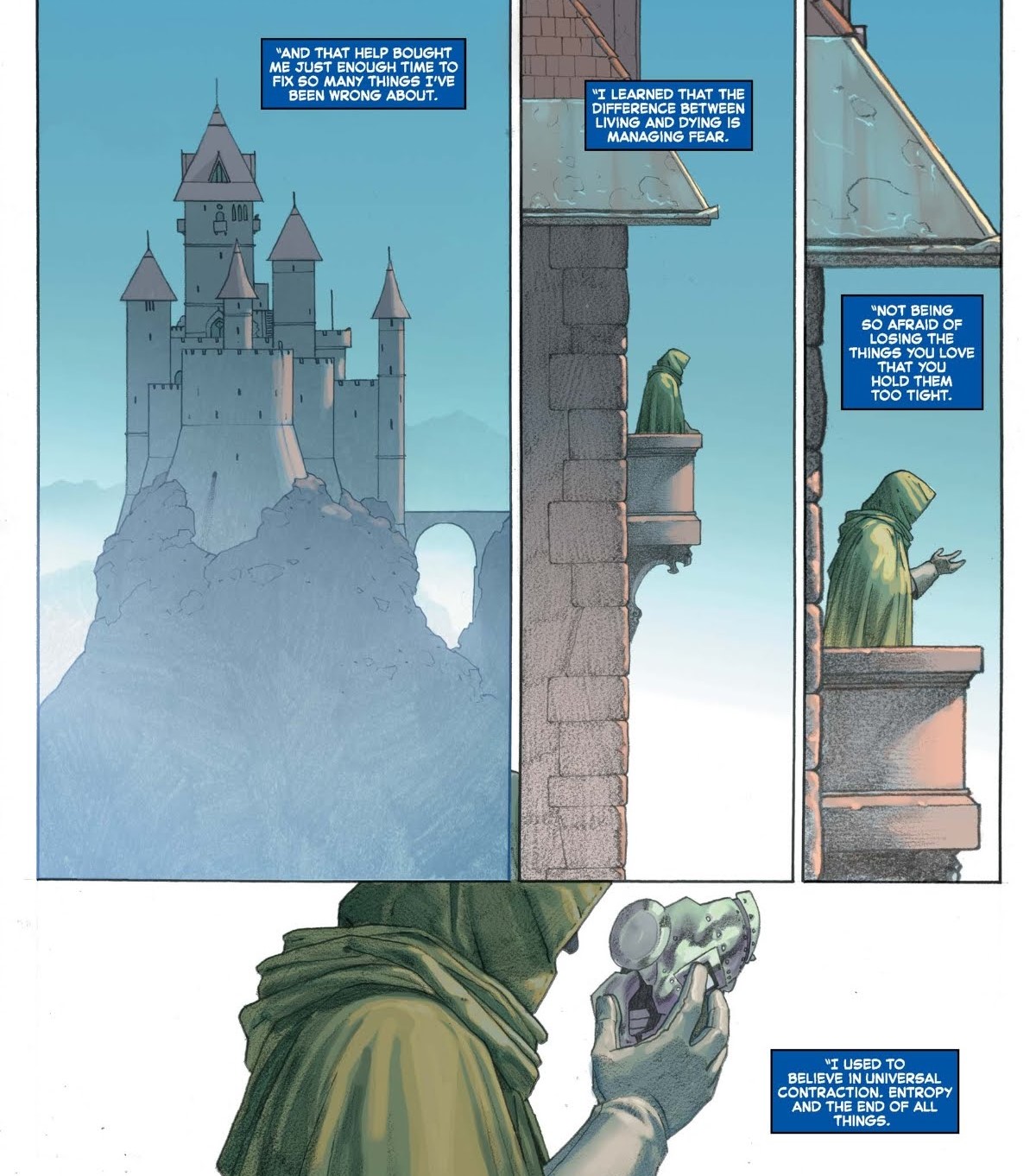 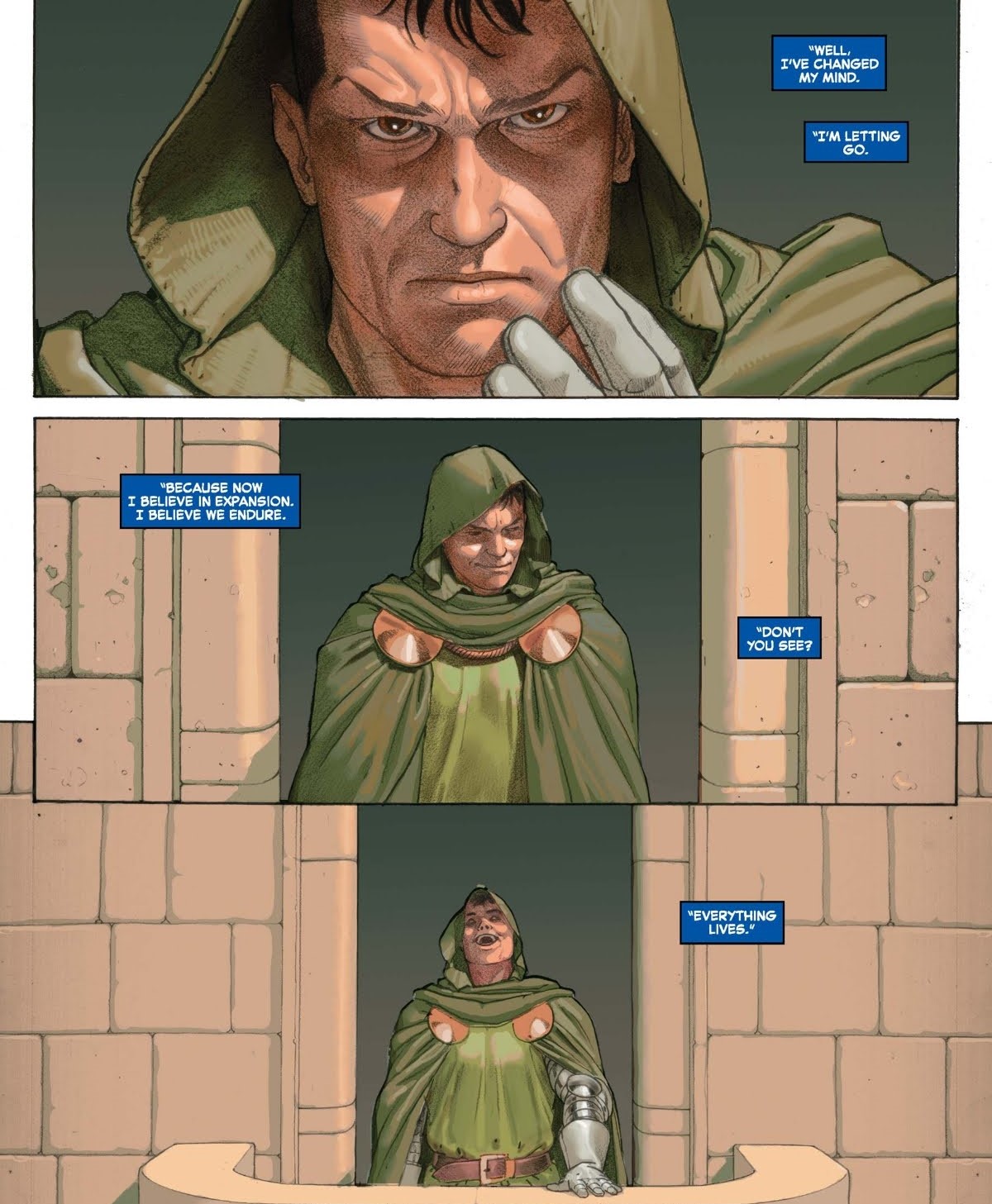