You are here: Home / Featured / Morbius and the Legion of Monsters Review!

My first exposure to Dr. Michael Morbius, the Living Vampire, was his arc during the “Neogenic Nightmare” storyline in season 2 of Spider-Man: The Animated Series. In that story, Morbius is a rival of Peter Parker’s in school and in romance who steals a vial containing a serum mixed with Peter’s blood in order to get a leg up on his own research. You see, he’s dedicated his life to curing a mysterious disease afflicting his unnamed home country. It doesn’t go well for him, however, thanks to an accident involving bats, lasers, and the stolen serum. Morbius gets transformed into a white-skinned vampiric creature with little suckers on his palms and an undeniable hunger for “plasma”. I thought he was kinda cool but very, very goofy.

While I learned later on that all that plasma talk was there to tone the character down for a younger audience, and that in the Marvel comics universe Morbius was a proper vampire with all the horror and biting (and no palm suckers!) that follows, I never could get the blue-haired, palm-suckered weirdo out of my head. But now, with the Morbius movie in theaters, I wanted to finally get a taste of the good doctor’s comics history. That exploration led me to the Living Vampire’s second go-round with the idiosyncratic Legion of Monsters in a couple of runs from 2010 to 2012. And much to my surprise, what I found there–a leader doing his best to best to help his people, all while combatting anxiety and hubris–positions Morbius in a much more heroic light than I was expecting. 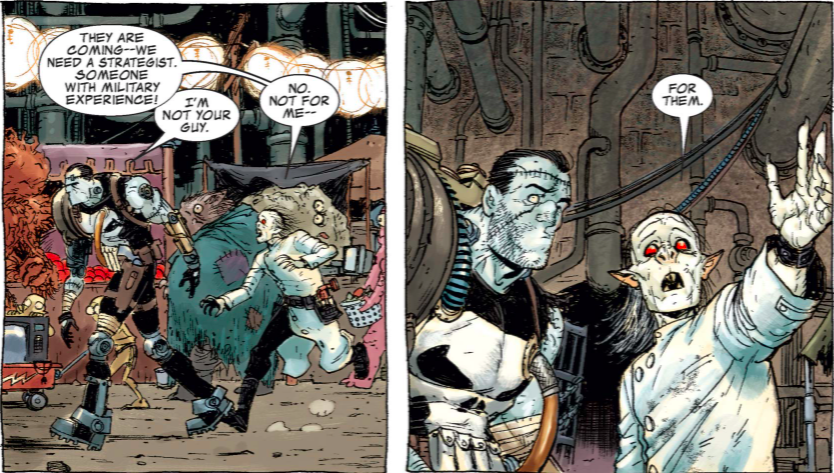 Morbius appears with the Legion–the group’s first time together as an on-page unit since 1975–in Punisher #11, the beginning of the “Franken-Castle” arc, by writer Rick Remender and artist Tony Moore with colors by Dan Brown. Towards the end of the “Dark Reign” storyline, Norman Osborn sics his Dark Wolverine on Frank Castle to eliminate the threat the Punisher poses to him. After a brutal rooftop fight with Daken, Frank is decapitated and dismembered and his remains are kicked unceremoniously into the sewer. The pieces of his body are found by Moloids and Man-Thing, who bring them back to Monster Metropolis, the massive monster refuge in the tunnels underneath Manhattan. There, Morbius pieces Frank back together and revives him as a hulking undead monstrosity so that he can help defend the denizens of Monster Metropolis against a group that is hunting them to extermination.

During the “Franken-Castle” era, Morbius doesn’t have a ton to do after patching Frank back together. He’s mostly a conduit for the plot, thanks to his skill reassembling a human body and his possession of a Bloodstone: the Macguffin that Hellsgaard, the leader of the monster hunters, is after in a classic “find the object that grants ultimate power” villain scheme. What we do see of the good vampire doctor’s role within Monster Metropolis shows that he has taken a prominent role in this new makeshift society. He has a lab in which to do his work, and he recognizes that he and his team–whose ranks include Werewolf by Night, Manphibian, and the Living Mummy–are the only ones who will protect this particular group of outcasts. Monsters like Morbius are often portrayed as forces of nature, acting either mindlessly or with pure self-interest. Remender goes against the grain and gives Morbius a purpose beyond himself and his hunger.

This is a heroic position for the Living Vampire to be in, but as is true for many heroes of the Marvel universe, Morbius falters in his efforts to do good. His hubris leads him to conduct an imperfect resurrection of the Punisher–Franken-Castle has to rely on a regular dose of pills to keep his mind from devolving–and to keep the Bloodstone secret from the rest of his team. The consequences of Morbius’ decision to hide the stone are dire, as its presence draws enemy forces to Monster Metropolis who then kill dozens of refugee monsters. The situation becomes increasingly dangerous after Hellsgaard is defeated, when Morbius goes against his better judgment and implants the stone in Franken-Castle’s chest in order to save his life. While the stone’s power regenerates Frank as intended, it slowly drives him crazy, feeding on and enhancing his drive for vengeance until he can’t tell his allies from his enemies. It’s an outcome Morbius foresees, but lets himself get talked into nonetheless.

After their adventures in Frank Castle’s orbit, Morbius and the Legion pop back up in their own four-issue series, Legion of Monsters, from late 2011 to early 2012. In this series, written by Dennis Hopeless with art by Juan Doe and colors by Wil Quintana, the Legion, under Morbius’ leadership, has established themselves as the peacekeeping force of Monster Metropolis. They’ve created booking procedures and holding cells for lawbreakers and clearly hold a huge measure of influence and esteem among the community they have created. However, said community is on precarious ground given the volatile nature of its inhabitants, and the Legion is put to yet another test when Elsa Bloodstone comes crashing into the center of Monster Metropolis.

Elsa, tenacious monster hunter that she is, has chased a raging creature from southern England through a portal to the underground city. The monster she was pursuing dies shortly thereafter, and Morbius goes into doctor mode. An autopsy reveals damage to the creature’s brain caused by a virus Morbius encountered in his past. Its magical nature makes the infected monster susceptible to mind control to such a degree that their brain tissue and higher level functioning will eventually be destroyed. Morbius recognizes that if the virus spreads through Monster Metropolis, it’ll mean hundreds of thousands of raging creatures unleashed into the world. So he puts it to the Legion (with special guest member Elsa Bloodstone) to track down the mysterious puppet-master while Dr. Morbius works on a cure.

Hopeless writes Morbius as a man who is desperate to keep Monster Metropolis alive, to maintain the tenuous thing he has been instrumental in creating. The reason for Morbius’ desperation becomes clear as we learn he was previously unable to stop the infection before it led to the collapse of a society of peaceful vampires. But even as he is desperate to keep things afloat, he begins to resign himself to what he sees as an inevitable downfall. He distances himself from the Legion, and eventually the stress of the situation nearly leads him to sacrifice the Metropolis to stop the virus. But it’s only once he realizes how much the success of Monster Metropolis means to him that he is able to work out the solution he’s been searching for. 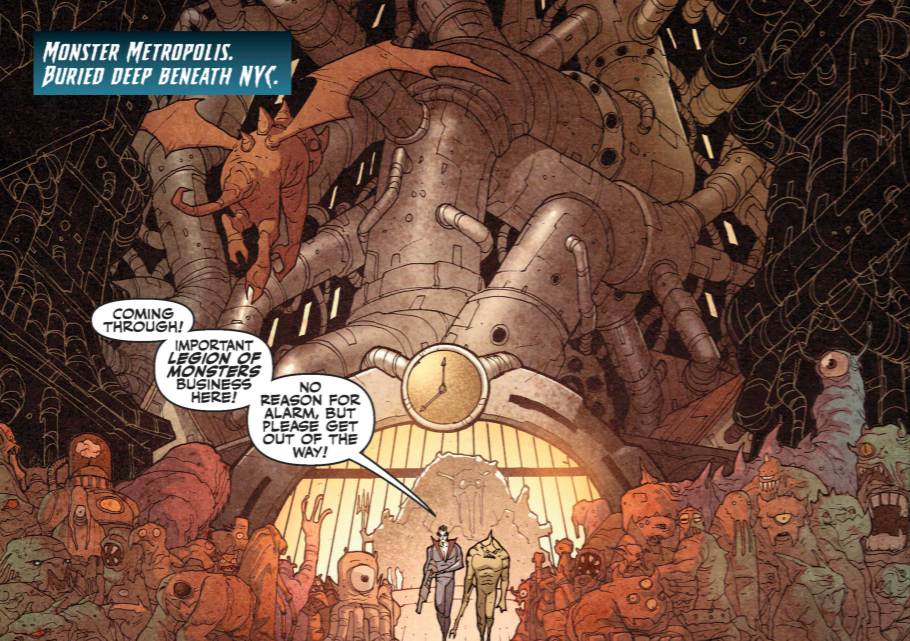 A Leader Among Monsters

The old trope of internal conflict–the human at the heart of the story fighting against the nature of the creature into which they’ve transformed–is at the heart of so much monster-centric fiction (and if the Morbius trailers are to be believed, it looks like we’ll be getting a heaping helping of it from Jared Leto and company in a few weeks!). But this conflict is refreshingly (mostly) absent from Morbius’ characterization in this modern Legion of Monsters era. In these stories, he has fully embraced his monsterdom (monsterhood?) and has decided to use his intelligence to bring his disparate people together. Morbius’ struggle during this time is not against his nature as a vampire–it is against the self-doubt he feels as a leader. He has seen this experiment fail before, and that knowledge takes him down nearly disastrous paths. But once he embraces the value of this society of monsters, he is able to rise above his fears and serve a greater purpose.