You are here: Home / Featured / Kang the Conqueror Reading Order!

Time based hijinks are a well known trope in comic book history. While DC typically has Booster Gold and the Flash to thank for timeline troubles, in the Marvel Universe, Kang The Conqueror is usually to blame.

Kang, whose first Marvel appearance can be tied back to 1963, was born Nathaniel Richards in the 31st century on an alternative peaceful earth (earth-6311). Kang stumbled upon time travel technology developed by Doctor Doom and has been a major threat to the Avengers and earth itself over the past 60 years.

Due to Kang’s constant abuse of time, the Marvel universe is filled with alternative versions of Kang. These Kangs have been known to operate independently of Kang, in support of, or usually against Kang.

Let’s cover the most prominent members of the Kang Gang.

Note: Spoilers May Follow! Skip Ahead to “Kang Begins” to begin reading!!

Kang the Conqueror – This is the Nathanial Richards version who first time traveled and ultimately led to the creation of the alternative versions. Wears a very snazzy Purple and green space suit.

Rama Tut – Kang’s first exploration into time travel led to the creation of the Rama Tut persona. Rama Tut used his knowledge of advanced technology to take over Egypt and install himself as Pharaoh. He is considered the first canonical appearance of Kang.

Immortus – A version of Kang from further down his timeline, who has dedicated his existence to ensuring timeline preservation and unwinding the timeline chaos caused by Kang. Usually wearing a pope style hat.

Iron Lad – An Alternative version of Kang who traveled back in time to stop Kang. Not surprisingly, he looks like Iron Man.

Kid Immortus – A future version of Iron Lad. His attire is a mix of Immortus, Kang and teenage angst.

This is just the starting lineup of Kangs. For reading order purposes, we try to explicitly state which version of Kang (and potentially Kangs) are involved.

Kang’s early appearances are a puzzle that slowly comes together piece by piece.

Kang cements himself as a critical Avengers villain with multiple appearances during the early days of the series. Avengers #8 is considered the first canonical appearance of Kang the Conqueror and he follows that up by attacking the Avengers with a Robot Spider-Man in issue #11.

Avengers #23 and #24 start to flesh out Kang more as a character and introduces Ravonna, a princess from the future who steals Kang’s heart.

Immortus also takes on the Avengers in #10 but his relationship to Kang is not completely clear at this point.

Start here with just issues #69 to #71 of Avengers. The rest of the collection will come up later. Kang pulls the Avengers through time to 4000 AD to fight against the Grandmaster’s Squadron Sinister.

The Fantastic Four travel back in time and battle Rama Tut (issue #19) who is revealed to be a bored time traveler from the future. After his defeat at the hands of the Fantastic Four, Rama Tut escapes to the time stream where he happens upon Doctor Doom and a friendship is born.

Don’t worry, this will eventually make sense! Kind of!

Kang Tries to Ruin Everything: Kang in the 1970s

Kang’s initial run up to this point was trending in a positive direction – he was still an out of control ego maniac but he was showing signs of redemption with his actions towards Ravonna. Kang quickly squashes any goodwill. Kang going to Kang.

Steve Englehart’s mind-bending story around the awakening of the Celestial Madonna (Mantis), is also critical to Kang’s history (histories?). The Celestial Madonna is prophesied to bear a child of great power and Kang appears with the intent to father that child. Pretty gross, Kang. The complicated connectivity of Kang, Rama Tut and Immortus is fully revealed.

Immortus transports Thor and Moondragon to the wild west in search of a missing Hawkeye and Kang. The arc ends with the first of what will be many Kang deaths. 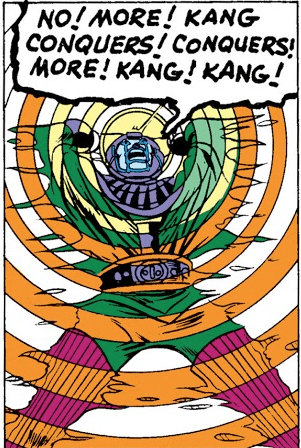 The 1970s was an amazingly unsuccessful time for Kang. Kang enters the 1980s deleted from the time stream so he can only go up from here.

Kang is one of the many villains selected to be part of Battleworld. The blossoming friendship between Kang and Doom is tested (Doom kills Kang after Kang betrays him) but ultimately prevails (Doom resurrects Kang afterwards).

Avengers: The Once And Future Kang

Due to the increasing number of divergent Kangs running around, a Council of Kangs is formed. Unsurprisingly, Kang sets forth with trying to eliminate the other members. Another important event in the Kang-Immortus relationship.

A Tie-in story to the X-Men Inferno event featuring Double Kangs! One version of Kang battles the Avengers in a pretty straightforward manner while another version once again tries to capture Mantis and ends up drawing the ire of the Fantastic Four.

Vision Quest and Darker than Scarlet operate as one large story. Immortus plays a key role in a story that centers around the Scarlet Witch, The Vision and their twins.

Kang, nearly driven insane due to the truth revealed by an alternative version of himself, is hoping for more luck in the 1990s. Will he trade his trademark green and purple armor for a stylish pair of JNCO Jeans? Read on to find out.

The Kang and Doctor Doom buddy comedy continues as they team up to try to stop Magus.

Citizen Kang and The Terminatrix Objective operate as one large story. Kang’s former love, Ravonna, now going under the name “Terminatrix” goes to war against Kang, a future version of herself and Kang again.

One of the most reviled events in Marvel comics history and a good example of when comics go bad – Kang is responsible for the villainous turn of a founding avenger. Most of the event is waved away but still an interesting piece of history albeit not the best execution.

X-Men: The Rise of Apocalypse

A flashback story to the early days of Apocalypse where we see that we can lay some of the blame for Apocalypse on Rama Tut.

Kang attempts to unite other Kang’s from different time periods in his endless war against Immortus. This is another important event in the Kang-Immortus relationship.

Avengers: Above and Beyond

Kang and his son, Marcus who is the new Scarlet Centurion (not to be confused with Kang’s Doctor Doom cosplay from the 1960s), set their plans in motion for what will take place in the Kang Dynasty.

Kang faces off against a rundown and overextended Avengers team and actually wins. Kang takes the earth!

This era centers around Iron Lad and his constant struggle to avoid becoming Kang.

An alternative version of Kang travels back in time to form a team and stop Kang. This all takes place soon after the tragic events of Avengers Disassembled, so Cap is less than thrilled to see the young heroes in action.

The Avengers of multiple timelines are caught in the middle of Kang and an alternative world Ultron.

Iron Lad continues to travel through time to rebel against Kang.

Iron Lad turns villainous and adopts the name “Kid Immortus”. He teams with a young Ravonna and a teenage Annihilus to court the favor of Doctor Doom.

Kang launches his wildest scheme yet which is really saying something.

Kang impersonates Loki and kidnaps the twin babies of two of Apocalypse’s horsemen. Kang then raises the Apocalypse twins in an alternate reality. This plan surely can’t go wrong for Kang.

The Apocalypse Twins destroy Kang’s future. So you could say that his plan backfired.

Kang forms the Chronos Corps with individuals he has saved from alternative dimensions.

The Chronos Corps play a key role in saving Earth-616. Kang absorbs the cosmic power of a dead celestial and as you can imagine, that doesn’t end well.

Issues #33 and #34 of the Hickman Avengers era center around Captain America crashing through time until being found by Kang, Immortus and Iron Lad.

A home run of a Secret Wars (2015) tie-in series written by Kerion Gillen. In Doom’s Battleworld, Abigail Brand runs a very different version of SHIELD and is saddled with Kang as her second in command.

A glitch in the timestream, traps an alternative version of Kang in the 21st century. This Kang adopts the alias “Mister Gryphon” and forms Qeng Enterprises (Kang has never been subtle). Mister Gryphon attempts to drown the Avengers in red tape while also forming an powerful alliance with the Chitauri warrior, Warbringer.

Event happens at the same time as All-New, All-Different Avengers Vol. 1: The Magnificent Seven because of Kang doing Kang things.

In an attempt to avoid his son’s death, Black Bolt makes a deal with Kang to bring the child into the time stream. This deal shockingly goes sideways and the Inhumans are nearly wiped from the timeline.

A story across generations of Avengers. Vision attempts to travel through time and abduct baby Kang. This causes an overwhelming amount of new Kangs to be created and the Avengers are forced to assemble a team from throughout history to take on the Kang stronghold.

Avengers: Back to Basics

Collects: Avengers: Back to Basics #1-6

Mister Gryphon transports Kamala Khan back to the time period of a past Avengers battle which just so happens to be Avengers #8 against Kang the Conqueror.

Kang is murdered, resurrected and joins the Cosmic Avengers against Requiem.

An openly lost and confused Kang blinks in and out throughout the series as Doctor Doom struggles to unravel a mysterious power coup.