You are here: Home / Featured / “It’s All Up To Me!” Nova’s Journey From Annihilation to Guardians of the Galaxy 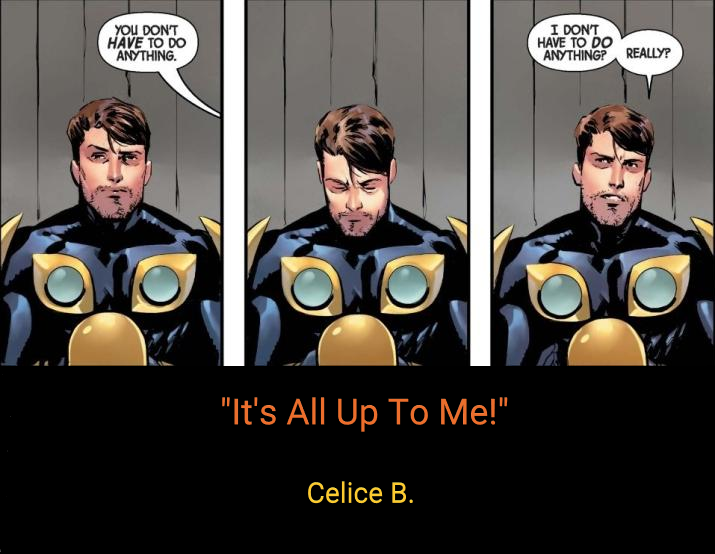 concluded recently after well over a year of space empire madness, cosmic wars, and not even thinly veiled queer subtext. It brought a ton to the table on a number of levels from refining the Marvel Cosmic Universe into being able to support a veritable Space Age, to staffing the team with majority queer characters, and more. But what I want to discuss is a bit more personal for me in Nova aka Richard Rider. 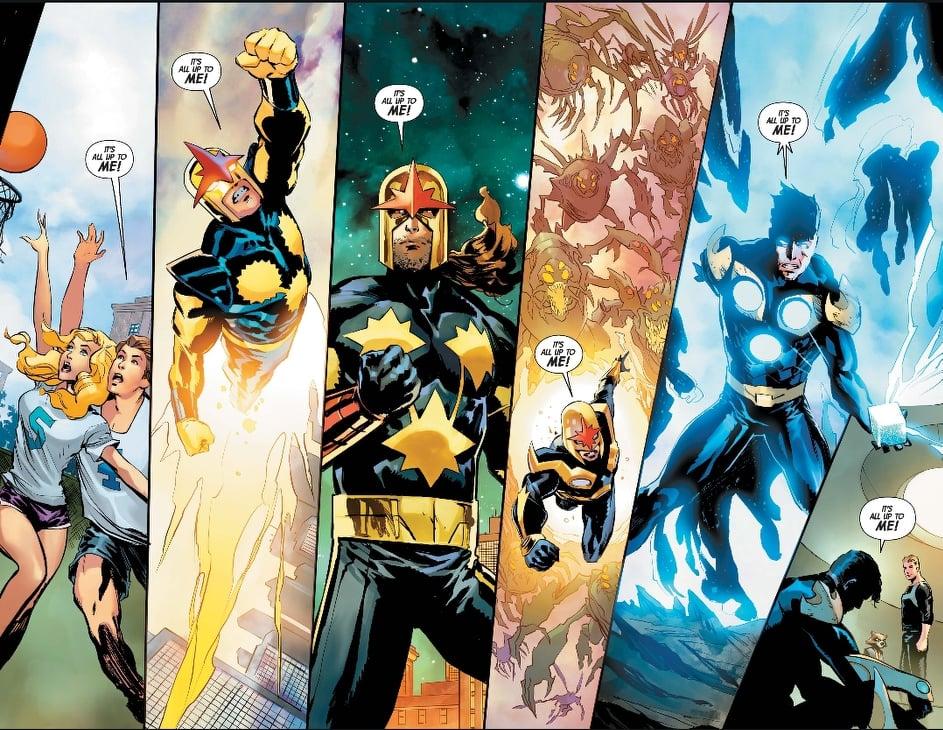 Richard has had something of a rough decade. After going from teen superhero, to twenty-something burnout, to space messiah, he died. He came back as superheroes generally do. But he came back to a world that had changed without him and was struggling to find his place in it. This led to more trauma including the death of his father while he was gone, and the loss of his brother who had followed his example as a Nova Corps member. Richard’s status as the perpetually rundown superhero/cop finally hitting a wall with the loss of family members, the Nova Corps, and his own mental stability presented a fascinating choice. So much of Richard’s arc in this run of Guardians builds on the wear and tear he’s gone through after his death. The build up finally takes its toll on him after he gets savagely beaten by Zeus in the first arc of the run, which leads to frankly one of my favorite single issues of a comic in years.

The long and the short of it is Richard goes to therapy. Ostensibly because he got beaten to a pulp by the king of gods Zeus. But the issue goes into a deeper introspection about everything Richard has suffered over the years and how it exacerbated his emotional issues from childhood when his father drilled a pretty simple idea into him: that he shouldn’t need help, that if it needs doing it gets done.

While well-intentioned it was a toxic idea of masculinity that drove Richard to put himself in harm’s way and be self-sacrificing in every possible context. Richard became damaged cumulatively from attempting to handle everything himself over the course of his history. All of that existing trauma is made worse by losing his mentor and friend Peter Quill aka Star-Lord, who in that same issue says he loved Peter to Gamora (the implications of that are clear but left up in the air in-story). That is given a pretty devastating response by Gamora who tells Richard that it was easier to love him when he was dead. We get a surgical review of why and how Richard is broken to his therapist. But it also culminates in Richard being asked by his therapist a pretty simple question: why can’t he see that he deserves love and help? 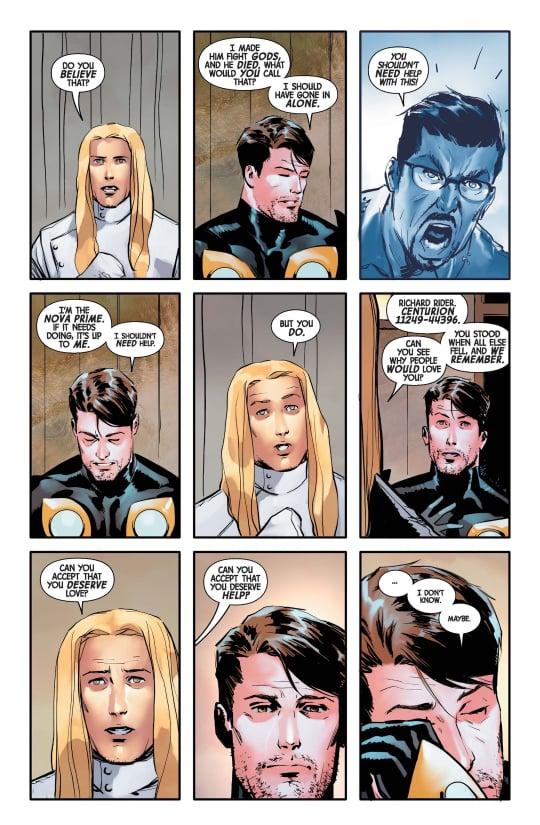 This issue hit me right in the heart for a number of reasons. That it connected to me on a personal level is the most obvious one, but why is more key. It approaches the idea of therapy and mental health with the same sensitivity and empathy that Ewing’s Immortal Hulk

does with regard to the topic of Banner’s Dissociative Identity Disorder. It also doesn’t do what a lot of other comics have tried, which is to simply use it as a story prop, or in such a heightened way that it ends up being harmful in comics such as Heroes in Crisis . What it does do is treat Richard’s issues with an appropriate amount of sensitivity that can be used within the heightened reality of the comic and offers an alternative. Within the confines of therapy, what Richard does experience is fairly in keeping with how therapy is experienced, and while he isn’t instantly healed at the end of the issue, what he does get is so much more important and meaningful. He gets a safe space to talk and to grow on a continuing basis. He even has a breakthrough in the course of his session. Even something as small as that is a victory and the best part is it has a continuing presence throughout the run of the book.

As the book goes on, the scale of the problems the Guardians face get bigger after Star-Lord returns. The Guardians undergo a rebirth going from a ragtag team to a full on superhero team with over a dozen members guarding a depleted galaxy. Richard continuously grows through this time. While we don’t follow his therapy sessions, we get to observe how he’s changed. He’s able to take out godlike aliens called the Progenitors with astonishing ease and send them home with a warning. But more importantly, we also see how he responds to stumbles. He’s still having trouble dealing with his guilt over Star-Lord’s death and how he’s changed, including having had a family and a kid. It’s also where he’s struggling to cope with the fact that Peter isn’t emotionally open to him or to anyone which is complicated given the aforementioned love issues involved. He’s confident but still having trouble dealing with everything that’s happening.

One of the key issues in that regard has Richard returning to Earth for the Hellfire Gala while stewing over the deals he’s had to cut for the greater good. Deals with people he’s fought in the past like Annihilus who he killed and now Doctor Doom who’s a member of their team. The thought of continually having to compromise his ethics for survival hits him really hard when he finds he’s having to shake hands with one of the biggest supervillains on the planet: Magneto. And his patience has run out. 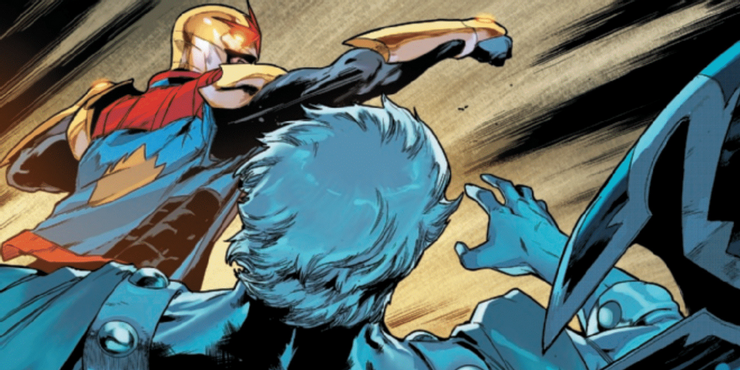 While the fight itself is funny (Richard and Magneto scrap over a very old crime Magneto committed causing some aliens to die in a Kirby Captain America comic), what follows is actually fairly meaningful. Magneto points out that mutants and the Guardians are in a fairly similar position of moving from simpler times into more complex sociopolitical arenas. Both of them admit that their instincts propel them to want to return to those simpler times and in Richard’s case, he wants to find sense back when the world was simply black and white as a superhero. 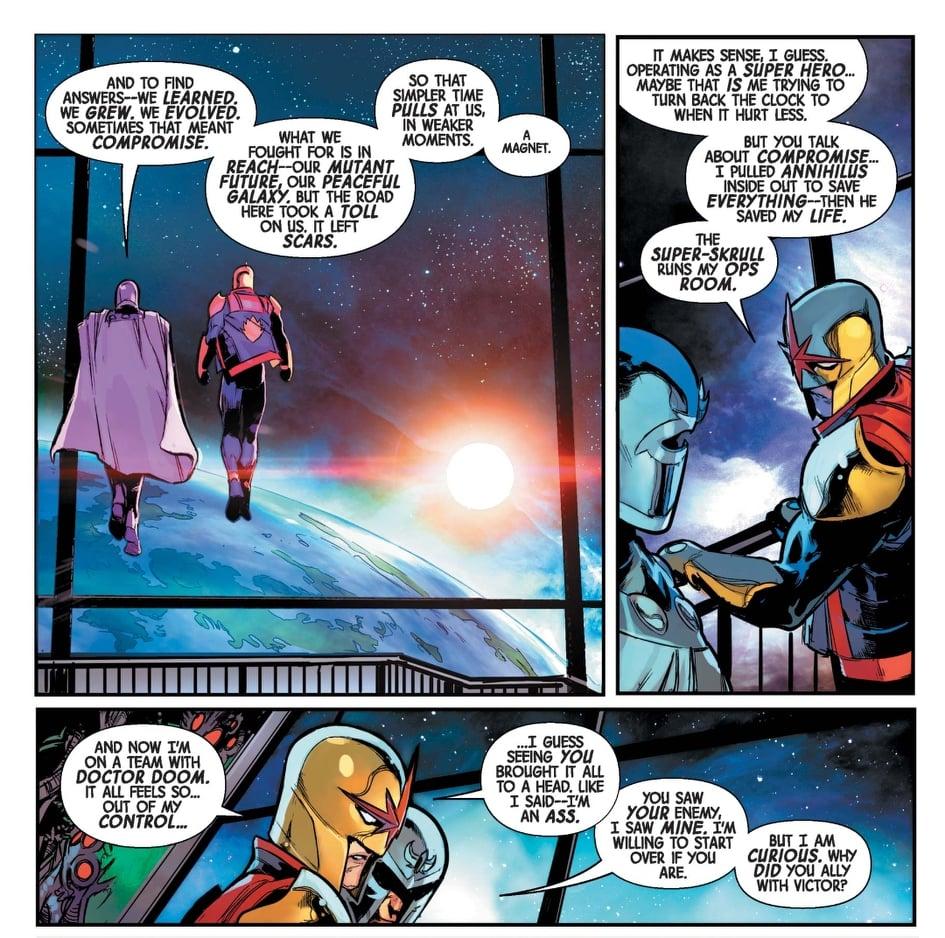 That feeling of loss of control gets exacerbated with the events of the Hellfire Gala where the nation of Krakoa reveals a new resource/currency called Mysterium which it blatantly uses to bribe other galactic powers into recognizing its colonization of Mars and declaration of rule over Earth’s solar system. All of that weighs on Richard who can only see the negatives involved given that he’s witnessed so many promising beginnings end in tragedy. Again we’re given a fairly reasonable understanding for Richard’s actions whose constant flirtations with tragedy over the recent past have made it difficult for him to not see bad ends. Whether that’s having to cut deals with supervillains, coping with his own self-loathing and loss, or having to watch the world he’s known for so long change before his eyes. All of that weighs on a person.

The next and most recent event that happens immediately after all of this is Last Annihilation. A big cosmic donnybrook with Dormammu and the rest of the universe he’s invaded. The fight itself isn’t of major importance, but Richard is forced to push himself harder than he’s had to in awhile and even reconnects with Gamora after saving her life. Which leads to the climax with Star-Lord and Gamora admitting their love for each other and for Richard who reciprocates that love just before he gets fired out of a giant gun to push a giant magic-infused bullet through the evil space wizard and win the day. 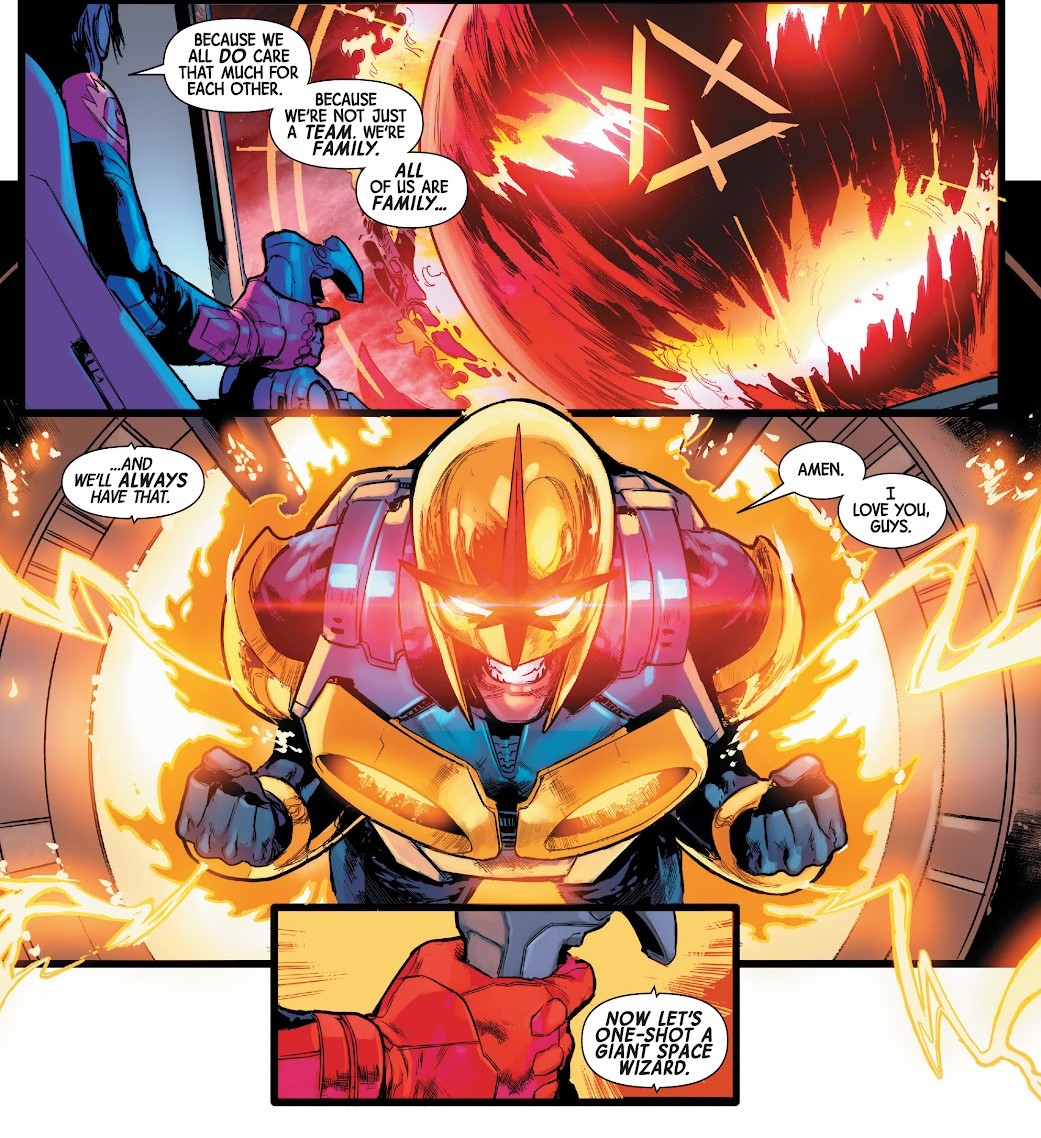 This is of course how the best comics are made. But more importantly Richard himself finally gets a win; he hears the words he really needed to hear: that he was loved by the people he loves in return. The aftermath sees so many long-standing enemies bury the hatchet, and relationships renewed. In Richard’s case he decides he can finally come to a stop for once. That the burden of duty isn’t solely on him anymore like he’s believed his entire life and can stop and do what he wants for a change.

That’s the magic of Richard’s character arc under Ewing in Guardians of the Galaxy. There’s no magic moment where he’s cured or gets better. He has bumps along the way, he slides downward and even starts fights. But he’s allowed an overall level of growth that isn’t usually there in a book like this. It also says in a straightforward way something that can be difficult to understand even when you rationally know it to be true: you deserve to be loved for who you are and you deserve the help to feel that way about yourself. There’s neither shame nor criticism, that growth is encouraged and respected which given the shall we say backward attitude of mental health in my home country is great to have realized. That his confidence is allowed to grow is sweet. That he’s also able to reach out of his shell and actually decide on his own that he deserves to be happy and even admit his love for the people he cares about is even better. From that aspirational desire to see yourself reflected in comics… Having a guy who has trouble accepting himself, accepting that he can be better than he is, that he deserves to be loved goes through a transformation where he can start to heal? It’s a pretty priceless story to me. And during a time when it’s difficult to be your broken and beautiful self, or to get help at all, it’s nice to see something aspirational in that complicated arena. 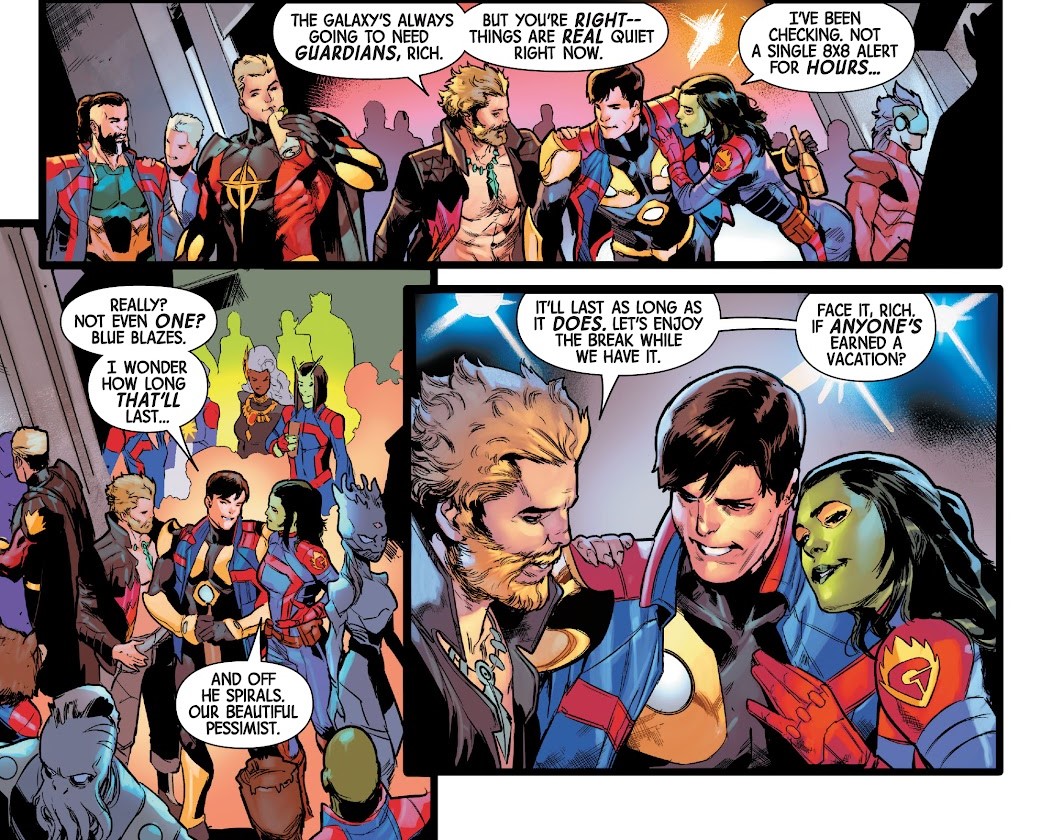