You are here: Home / Featured / FF by Jonathan Hickman | Grief, Hope, and the Quest for a Better Tomorrow

Since their arrival in 1961, the Fantastic Four have stood as timeless icons of relatability and imagination, with their dysfunctional-yet-loving dynamic as Marvel Comics’ “first family” taking them across the stars and into the frontiers of the unknown. But when tragedy strikes, and that timeless bond is broken, the surviving members of the family will see their team and their mission evolve into something else entirely. Welcome to tomorrow. Welcome to the Future Foundation.

To many, writer Jonathan Hickman’s tenure on Fantastic Four

is one of the title’s most definitive runs, weaving together years of separate stories and firmly re-establishing the team as the beating heart of the Marvel Universe. Hickman would introduce countless iconic stories over his run, but the writer’s greatest mark on the title would come through a 2011 relaunch, with the series re-emerging under the new title “FF

.” Following the team as they rebuild in the wake of an immense loss, the story acts as the throughline for Hickman’s vision of the Fantastic Four, digging deep into its characters and resting cosmic, existential adventures atop a more grounded tale of grief and hope. But while the story acts as a re-invention of its characters and themes, it’s also a celebration of Marvel’s First Family, and how even in the face of tragedy, hope and adventure can spring eternal.

WELCOME TO THE FUTURE FOUNDATION

Arriving on Fantastic Four in 2009, Hickman saw a premise and a team desperately in need of a re-invention. The events of Civil War and Secret Invasion had fractured the team and soured readers on the characters, namely Reed Richards, who had grown cold, controlling, and paranoid. In spite of spectacular runs by J. Michael Straczynski and Dwayne Macduffie, the Four’s family dynamics began to take a backseat to the title’s more fantastical elements, leading to a period mostly forgotten by critics and readers. In Hickman’s eyes, the solution wasn’t just to bring the family dynamic back, but to make it the key underpinning in the Four’s story.

“I’ve noticed…a number of writers…try and turn ‘Fantastic Four‘ into sort of an ‘I’ve figured out this very cool scientific story!’ type of book. And I think the series has lost a little bit of its heart,” mused the writer.

“Family, future, and exploration are timeless, universal concepts. Sure, they can be nostalgic, but they don’t have to be. That’s really the brilliance of a lot of the early Marvel characters, they were created by guys wrapping both arms around timeless themes.”

Picking up in the aftermath of issue 587, FF opens with the family devastated by the loss of Johnny Storm, killed in battle against the villain Annihulus. Death has always been treated as something of an event in superhero comics, with publishers taking major characters off the board only to bring them back months later, usually to record sales. Hickman would eventually bring back the Human Torch, but the character’s absence is the major catalyst for FF’s cast, as each character fights to continue their mission in a world that’s grown darker with this loss. 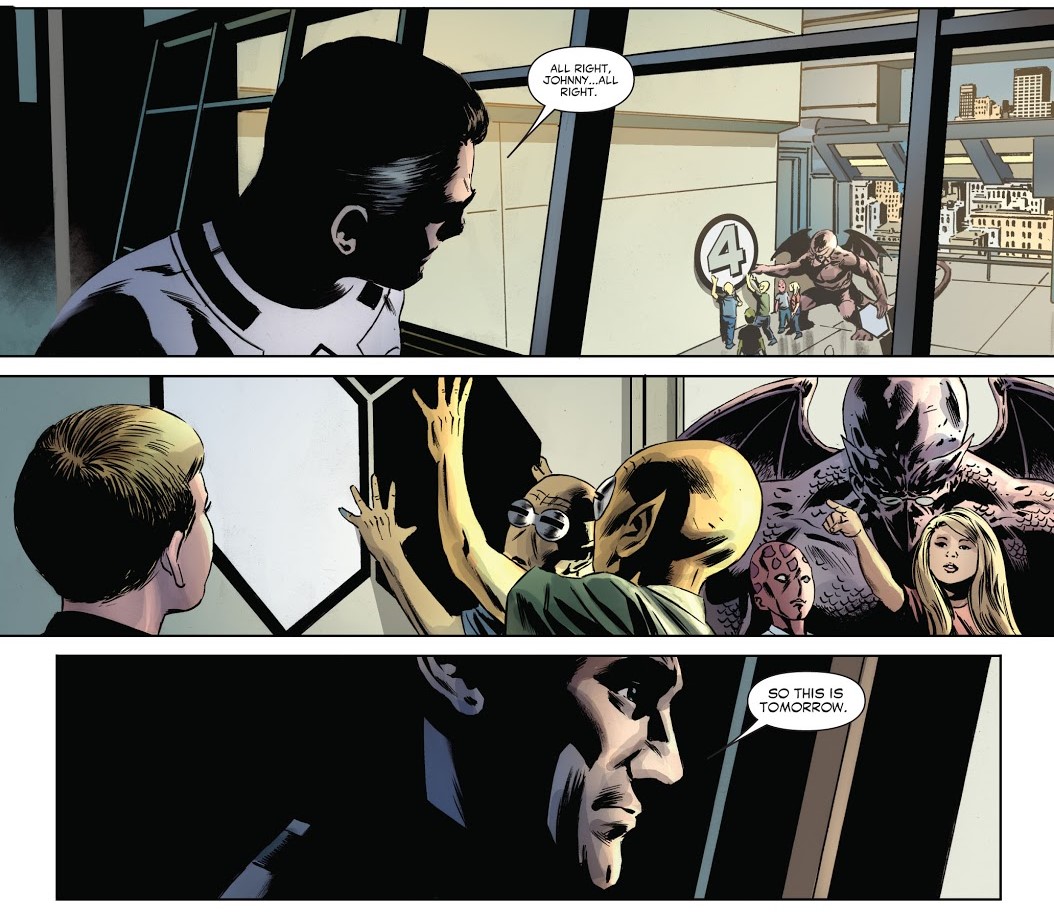 Torch’s death has left a mark on the surviving members of the Four, each trying to process their grief through superheroics. Reed and Sue, spurred on by Johnny’s last wish, throw their all into carrying on their fight for the future while Ben Grimm continues to blame himself for the loss of his friend. Earlier arcs in Hickman’s run deepened the dynamic between the team, but FF sees them expanded and wholly transformed, extending Marvel’s first family into something bigger and more complex, complete with all-new designs. Characters throughout the team’s history are brought into the fold, with some like Spider-Man, children Franklin and Valeria, and Reed’s father Nathaniel acting to bolster the family. Others, like Dragon Man, various former villains, and even Doom show an evolution beyond the group’s original “good vs. evil” premise in favor of something higher-concept. Once a tight-knit family of explorers, the team is reborn as the Future Foundation, a coalition of the world’s best and brightest dedicated to a single, powerful goal: to solve everything.

SO THIS IS TOMORROW

Building on his newly-expanded cast of characters, Hickman also used FF to elevate the title’s stories. In place of the arc-to-arc storytelling seen under previous writers, Hickman steadily seeded threads that would grow over the course of his tenure, teasing them through cryptic warnings delivered to the team from the future. 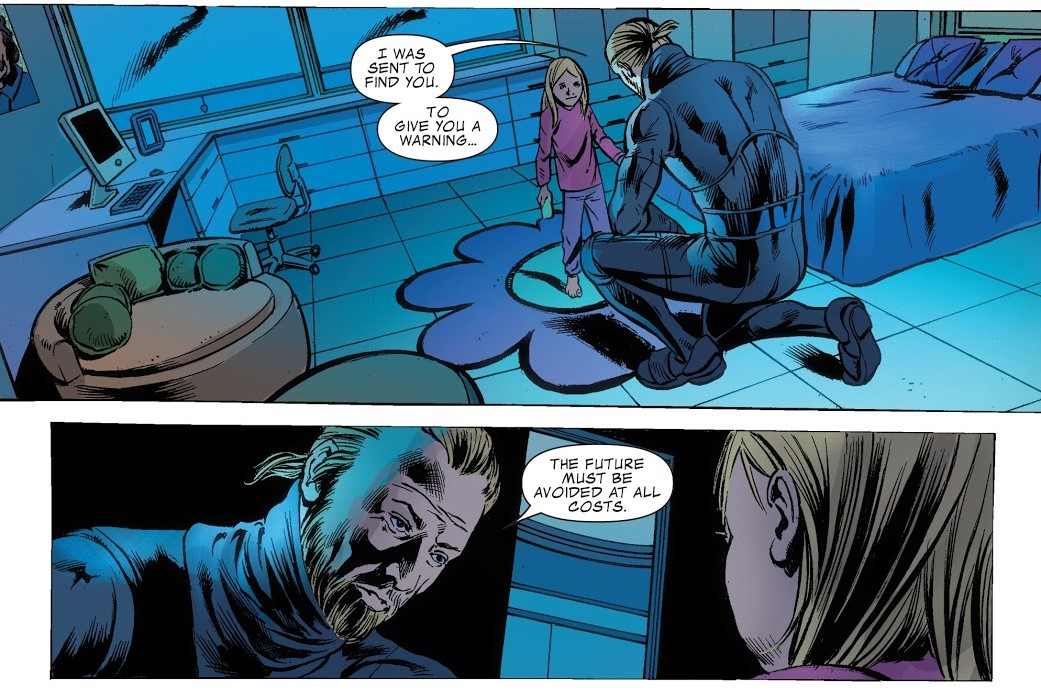 Drawing from the scientific idea of Catastrophe Theory, FF’s plot sees the culmination of these countless threads, pitting the newly-minted Future Foundation against a gauntlet of multiversal threats: Enemies from across the team’s history re-emerge, alien empires collide, and the most powerful beings in the universe begin to set their sights on earth. As these seemingly separate events come together, they coalesce into a threat unlike anything the four have faced before: a prophecy spelling the end of the universe itself.

The scale and creativity behind FF is staggering, but the greatest strength of the story lies in Hickman’s ability to keep its spectacle tied to his core cast and their own personal journeys. Much like previous arcs, Hickman makes Reed Richards his primary lead in FF, continuing on his mission to solve his biggest challenge yet. The sheer enormity of what’s to come hangs over Reed throughout the story, stretching him to his breaking point as he continually tries to outthink the inevitable. This sense of unease is built up even further over the course of the story, as Reed opens the team to uncertain alliances and increasingly desperate plans to stave off each new apocalypse.

This expansion of the team also brings thrilling new character dynamics to the book, re-establishing the team as an integral part of the Marvel Universe and deepening its core cast. Once the team’s undisputed leader, Reed is given a new sense of emotional maturity through his father, family, and children, who push Reed to think beyond himself and balance his hope with a healthy dose of pragmatism. Spider-Man, a longtime friend of the four (and no stranger to tragedy himself), plays an important part in the team’s transformation, acting as a much-needed emotional and moral check. The bright young minds of the Future foundation build even further on the family dynamic at the heart of the group, acting as the evolution of Reed’s own approach to building a better tomorrow. However, the biggest new addition to the team comes through its oldest rival, whose decades of history with the family see him transformed into a key player in their new mission.

Drawing from decades of the title’s history, FF crafts an emotional climax to a myriad of threads across Hickman’s run, and somehow, ends up opening the door to even more possibilities. Even after the series’ conclusion and return to Fantastic Four, the writer would continue to elevate these stories in titles set across the Marvel Universe and beyond. Something big had begun, and nothing would be the same again. 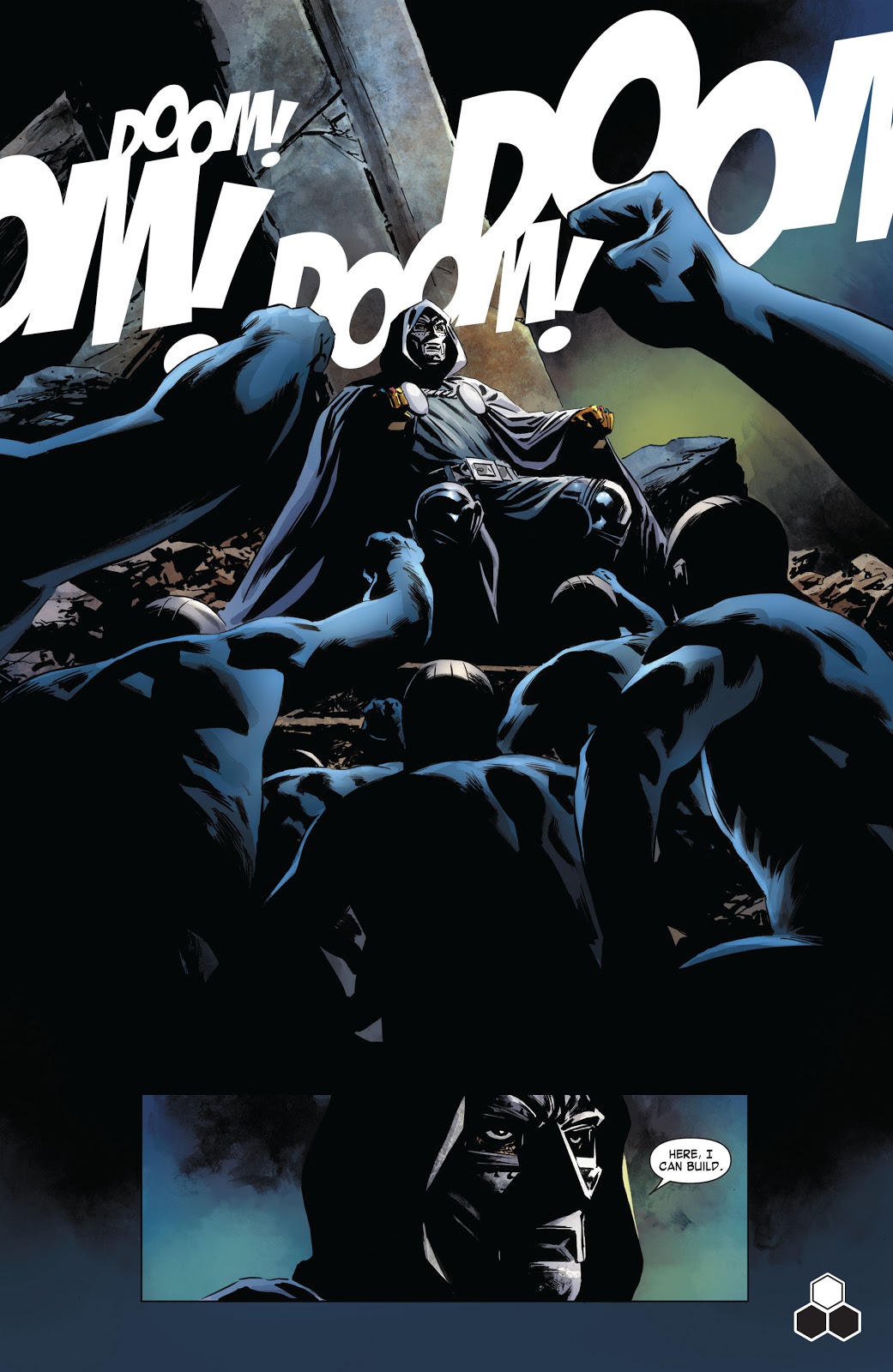 From FF#16, by Jonathan Hickman and Steve Epting

Much like its plot, FF’s presentation is the culmination of countless elements into a celebration of the team’s history. Up until the relaunch, the title featured a stable of artists to keep up with deadlines, the most notable being Dale Eaglesham, whose art draws heavily from the retro-futurism and spectacle of Jack Kirby. While this approach continued through the book’s relaunch, it feels much more focused in FF, with each artist deployed to a different corner of the story with a few notable exceptions. Greg Tocchini’s sketchy, expressionist style lends itself perfectly to the alien worlds of the Kree and Inhumans. Nick Dragotta’s sleeker caricature style leans into the book’s more surreal, experimental elements. Barry Kitson and Mark Brooks add a softness and warmth to the title’s more hopeful moments. But Hickman’s primary collaborator on FF, Steve Epting, leaves the biggest mark on the book’s human element. While Epting matches the scope and wonder Eaglesham brought to Fantastic Four, he also brings a decompressed approach to FF’s storytelling, shown through tighter focus on faces, expressive mood lighting through inks, and repeating panels that heighten moments of tension or levity. 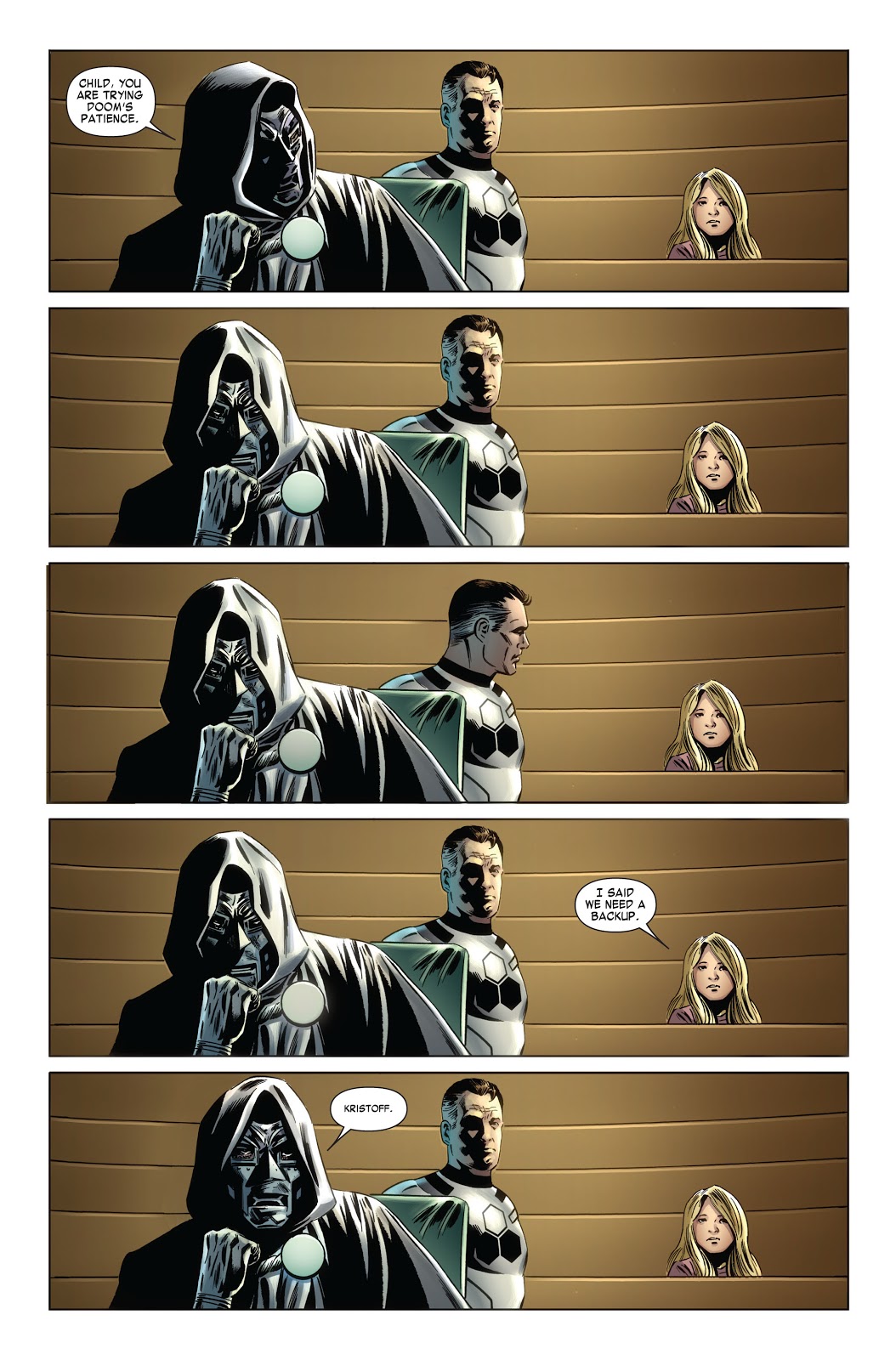 Another key pillar in the title’s presentation is its place in Hickman’s larger saga on Fantastic Four. Over his tenure, the writer would boil the team’s struggles down to an eternal battle between hope and despair, with countless threads criss-crossing through stories across the saga. While this interlocking approach to narrative might be confusing for some, with some plot threads appearing or vanishing at random, Hickman also manages to ground FF as its own stand-alone work, crafting a story that celebrates the hopeful resilience of the Richards Family.

“They are the perfect family in an imperfect world…and they represent the hope of what could be,” muses the writer,
“After all, what was it that made Reed choose his family when he should have chosen utopia? What made Johnny sacrifice himself and what brought him back? What broke an unbreakable Ben Grimm and then found a way to make him whole again? What made Susan strong enough to stand when the others fell? What made Nathaniel always come home, and what was it that made Val and Franklin sacrifice everything to save their father?”
“It was love. Boundless, unconditional, to the end of time and back, lift you up from death itself, LOVE. And what’s not fantastic about that?”

Coming at the peak of Hickman’s tenure, FF is both a reinvention and celebration of what made the Fantastic Four so timeless in the first place. It can be hard to look at the future with hope. But it’s our friends and family that give us the strength to face it all, and shape it into something truly fantastic.