In a word, Doctor Doom by Christopher Cantwell and Salvador Larroca is propulsive. It kicks off quick and does not stop. The hook is simple: an international tragedy has occurred, and it looks like Doom is the culprit. This makes ol’ Victor the world’s most wanted fugitive, and puts him at a severe disadvantage. Good pitch! Doom is indisputably the best villain in the Marvel universe, possibly of comics in general, and conceivably the entirety of fiction. And the comic is good… but not perfect! To better understand the quality of this series, we are going to turn to three men. The first is series writer Christopher Cantwell. The second: main series artist Salvador Larroca. And finally, we will consider Victor Von Doom himself, in all his armored glory. 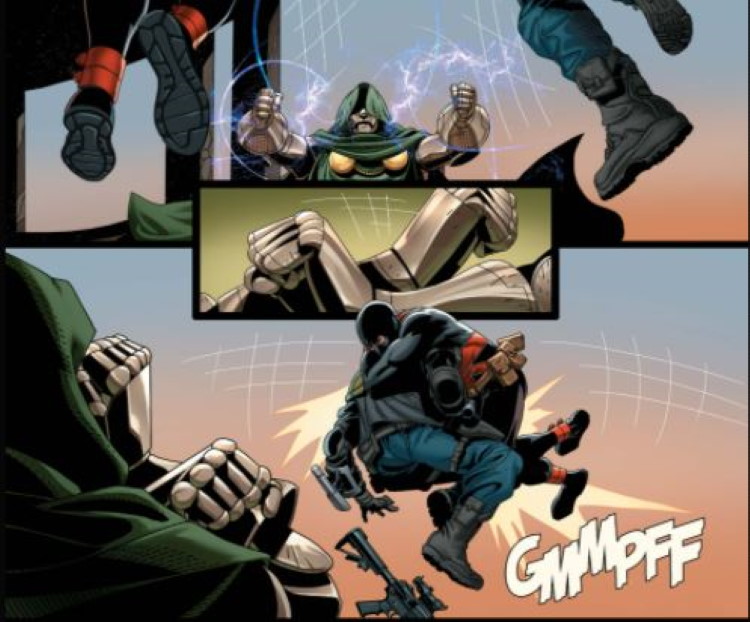 Can he write? He can, well!

Christopher Cantwell is a writer who comes to comics from another medium—in his case, TV. He is probably best known in that world as the co-creator of Halt and Catch Fire. You ever seen that one? Killer show! Amazing to think that was someone’s debut! Cantwell’s first foray into comics was a series called She Could Fly, published by the Berger Books imprint of Dark Horse. I know you probably came here to read about a Latverian sorcerer, but I actually think this journey is just as important.

Karen Berger was a major editor at DC from the early ’80s until 2012, and one of the masterminds behind the Vertigo imprint. In her tenure, she helped bring a number of famous dudes into American comics, including Alan Moore, Neil Gaiman, Grant Morrison, and about a million others. Her real skill is as a talent scout. Dark Horse understood that. When Berger left DC, they offered her a blank check to continue doing what she had been doing. So when Karen Berger stands up and says, “This Halt and Catch Fire guy has some real comic writing chops!” I listen. She’s the expert, after all.

Doom is Cantwell’s second comic, and his first licensed work. This is when I become the harshest critic—I think that most people who make the transition into comics from another type of writing often struggle with the specific needs of the medium. And Cantwell does… better than most. Throughout this series, you can feel him honing his craft, and by the time he’s writing Iron Man (his next major Marvel series), he’s gotten most of the way there.

Where you see him struggle in particular (and this is by no means a unique problem to Cantwell) is storytelling clarity. Comic writers often put details into their scripts meant only for the artist. With a lot of time to hammer out details and a good working relationship, this can be part of a long process that produces a coherent story. But that’s not always the case in Doctor Doom.

For example, let’s look at the flashes to an alternate future where Doom is happily married with a kid. In the first issue, these scenes happen with almost no warning. I mean, obviously something is up. Doom’s got a real face, no scars or mask! But the ambiguity as to what is up specifically, that seems unintentional. I was left wondering for an issue if this was a dream, an alternate reality, the past, the future, or whatever. But what I really wanted to know, is how those scenes were going to be important to the overall story. When the reveal does land, it’s so matter-of-fact that I question whether or not it really should be viewed as a “reveal.”

That sort of storytelling feels sloppy! And thankfully, it’s not egregious, but I am sensitive to that sort of thing. If anything, seeing Cantwell improve so much, even within this series, is gratifying to see. He’s got the comic book writing chops and the passion; the skills are going to come with more experience.

I understood that reference

A lot of the shaky stuff could be somewhat mitigated by the right artist, which means we’re going to have to talk about Salvador Larroca. I’ve never tried to count, but I’d bet I’ve read more comics drawn by Larroca than by any other artist. He’s been doing books at a prodigious rate for Marvel since the early ’90s, mostly on the X-Men side of things. Let no one say he doesn’t have a distinct style: after years of reading his work I’d have no trouble picking his out of a lineup. Larroca prefers to work in a realistic mode, eschewing more representational or abstract art entirely.

Therein lies the problem. Larroca uses what some people may call a “reference-heavy” style, but other people might just call it tracing. The difference actually can get very academic. I’m sure Larroca has literally traced a still photograph a few times. Far more often, a comic artist will draw while looking at a picture, without literally putting the two pages on top of one another. It’s part of what allows Larroca to draw so many comics, while always hitting his deadlines. It keeps him on Marvel editorial speed dial.

Famously, this was a big hit against Larroca’s Star Wars work. When an artist traces the well-known faces of the cast of one of the most seen movies of all time, people are going to notice. Not only that, it minimizes the opportunity to make the most of the language of comics. A lot of motion is conveyed through cartoonish effects, and you don’t tend to get a lot of that in a Larroca comic. When he draws spaceships having a big ol’ dogfight, they look like models suspended in the air, not crafts zooming at half the speed of light.

All of this is to say that Doctor Doom is not Larroca’s best work, nor is it his worst. One thing that works in his favor is that Doom doesn’t usually have a human face—he has an iconic mask. When it comes to superhero costumes, monsters, and literal metal men, Larroca is blocked from leaning on his worst habits. He can reference other images to get the posing right, but he can’t creep into the uncanny valley. You see this all throughout Doom. The not-so-good Doctor himself looks pretty good. Taskmaster looks pretty good. But normal looking human characters look lumpy and off.

There’s a version of Doctor Doom where Cantwell collaborated with someone young and hungry, with something to prove. Instead, he’s working with a pro. It’s hard to know what that counterfactual would play out like, but ultimately Larroca is not well matched for the nonstop action of the story. He keeps the action clean, but there’s room for a little messiness. He plays pretty fast and loose with showing Doom’s face, for example, which was something I’m used to always seeing obstructed by shadows. When you see Esad Ribic draw Doom’s ravaged visage in Secret Wars, the panel burns itself into your memory. Here, you see Doom’s lumpy mashed-potato face in a hoodie, and you remember it for the wrong reasons. 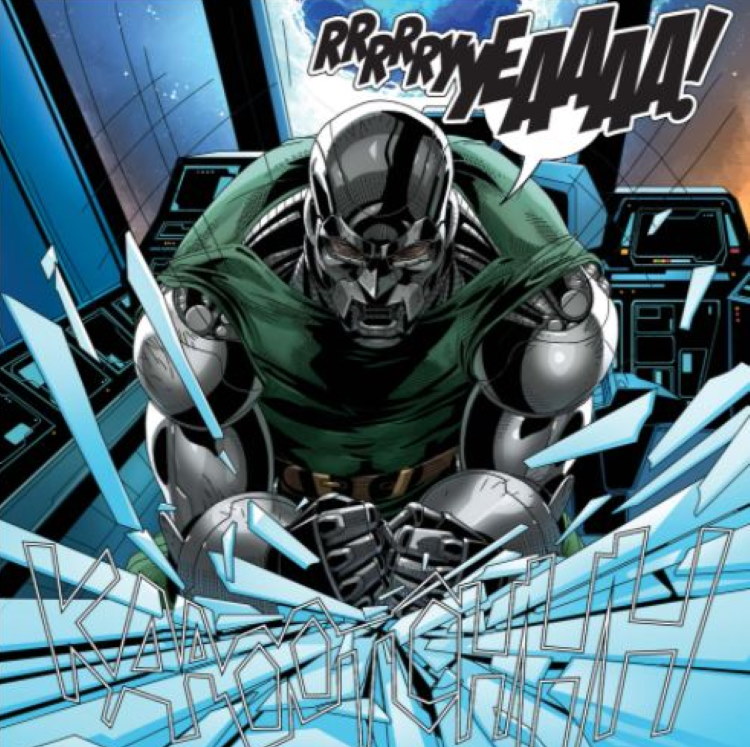 Of course, the main attraction here isn’t Larroca’s art or even Cantwell’s writing. It’s the fact that Doctor Doom is the best. You know Doom, right? Master of science and sorcery? Caring despot of the Latverian people? Owner of a cool pet vulture (who no one has seen since 1962)? That Doctor Doom!? Yeah, he’s the best.

So the undisputed best modern writer of Doom is Jonathan Hickman, who made Victor a major player in his Fantastic Four run and his subsequent time on Avengers. Cantwell doesn’t exactly rise to the baroque heights that Hickman hit, but he’s got a great sense of the character. Cantwell’s Doom is honorable and a little inscrutable. There have been many good stories about honorable Doctor Doom, but the mysterious edge is all Cantwell. You frequently turn the page, scratch your chin, and ask, “But what is he really thinking under that metal mask?” It’s a cool angle, and one that fits the character well.

The greatest joy of the series, however, is seeing Doom’s relationships with the other characters of the Marvel universe. Cantwell is obviously a Marvel super-fan, and he gives Doom a supporting cast of villains famous and obscure. Kang the Conqueror (a villain I don’t much care for) is a major supporting figure in the series, and Cantwell writes a good Kang! He also writes a good Morgana le Fey, who has an ineffable chemistry with Doom. And hey, even my favorite Marvel villain Taskmaster shows up!

Each guest character is well-written, but more importantly brings out different sides of Doom. His impatience with Kang stands in contrast to his weird tenderness with Morgana. He has a different rage for his incompetent Doombots than he does for his nemesis Reed Richards (RICHAAAAARDS!). Taking a tour through the world of Marvel could have felt empty, but because we are seeing Doom tear through the universe shouting his opinions, it feels grounded. The world feels fantastical, but feasible.

I don’t care for subdued superhero comics without a lot of personality. If your protagonist is fighting a bunch of gangsters in suits on a train to get a briefcase, that briefcase better have a wacky doomsday device in it. Doctor Doom is a story that could only take place in the Marvel universe. It’s got secret moon bases with black hole generators and witches and assassins. It’s a propulsive chase through a universe so fun, you’ll kind of humor the idea that maybe it would be pretty rad to be on the run there (though it most definitely would not). While the comic itself isn’t the height of craft—Cantwell is still finding his legs and Larroca is turning in pretty good art—the ideas are so big and bold and brash that you can’t help but love it. And when they are coming at you so fast, you hardly have room to catch your breath. Doctor Doom may not radically reinvent the character, but he doesn’t need reinventing. Fans of Victor Von Doom are going to want to see him star in his own weird Marvel adventure.