In part 2, I talked briefly about DC’s lack of diversity during Rebirth and how Infinite Frontier has been a significant improvement. I want to look closer at the data. How many books were given to characters who are BIPOC and/or queer over the last four years? In order to do this, I went through every other solicit since January 2018 and wrote down the number of in-continuity books that had a BIPOC lead character or a BIPOC-majority cast. I did the same for queer representation. I wrote down the number of books each month with a majority-queer cast or a queer lead.

I only included queer characters and books where queerness was a prominent feature in the book. For example, Wonder Woman is canonically bisexual, but the comics consistently don’t showcase that side of her. As such, I did not include her. Similarly, Jonathan Kent is now canonically queer, but in 2018 he wasn’t. As such, Jonathan Kent only contributes to the book being a queer character in the year and era that he came out: March 2021 and after. So Adventures of the Super Sons doesn’t count, while Challenge of the Supersons does, because the latter book was written in late November but released physically during this period of time.

Previously: Part One – The Road to DC Infinite Frontier

Another example is Harley Quinn, who had a same-sex kiss early in Rebirth before slowly having her queerness walked back. As such, Harley Quinn from issues #25-#37 counts, but I didn’t count issues #37-75. However, Harley Quinn #1 (2021-) discusses her queer relationship and as such I can confidently include it. Catwoman, while canonically bisexual, is in a similar boat: only Catwoman #39 to #41 count because Tini Howard is re-emphasizing that side of her in the run (based on solicits).

In order to be a BIPOC or queer “majority” cast, at least 50% of the main characters must fit those categories. For example, the Super Sons books have a BIPOC majority cast because Damian is a person of color, and he is half the duo of the Super Sons. Superman and the Authority, however, is not a POC book because only four out of the nine members of the Authority are BIPOC. However, it is a queer book because five out of nine members are canonically queer. While this may seem confusing, the ultimate goal is to distinguish between books with a single black character and books with an actually diverse cast.

Finally, I based these stats off of solicits, and as such, some books that got delayed or canceled were still counted. For example, Batman and the Outsiders #1 is in there twice. Similarly, Cyborg #24 is included despite never being released. That being said, the data makes it clear that diversity at DC is on the rise over 2021 after a trend downwards from 2019 to 2020. The primary reason why I measured the data this way is because with the pandemic resulting in the plummet of comics from March through June, data would otherwise be misleading and the data trends would be off. Basing the data on solicits is a more consistent approach. 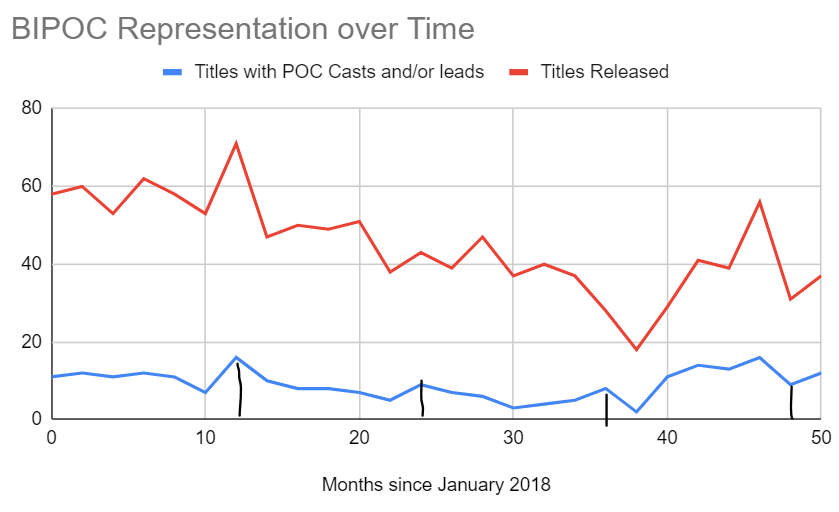 In the graph of months since January 2018 vs. comics with POC casts, 2018 saw a relatively constant number of BIPOC titles at around eleven titles per month. However, over 2019 DC saw a consistent drop in the number of BIPOC titles. Various books began to be canceled, and titles by POC dropped at a rate of 0.91 books per month over 2019 (linear regression is a strong negative correlation of y=-0.914x+24 with an r-squared of .81).

Over 2020, BIPOC titles continued to drop, albeit much more slowly, with May 2020 (the starting point of the George Floyd protests) resulting in a turning point in the data. May 2020 had only three BIPOC titles, so essentially the only way to grow was up. The end of that year featured a continued low of only five BIPOC titles.

2021, with the exception of March, saw a significant increase in BIPOC titles that would continue by a weak positive correlation of roughly .4 more books per month. (This result is reached after taking out March 2021 and January 2022, which are unique outliers with strange circumstances that would bring the r^2 value into the .10s, basically rendering the trend meaningless.)

There were a couple of unique months during this time period. In 2019, February only had three Wednesdays, while January had five. As such, January had five full weeks of comic releases as opposed to the standard five-week release calendar (four full weeks, followed by a small fifth week). And in March of 2021, DC launched Infinite Frontier with less than twenty books, and BIPOC stories were significantly under-represented in the first month of launch.

Overall, this graph has three key takeaways. One, that BIPOC representation consistently decreased from 2019 to 2020. Two, that 2021’s numbers are higher than 2018’s as a whole. Three, that the number of in-continuity books trended in a similar pattern to the number of BIPOC books. 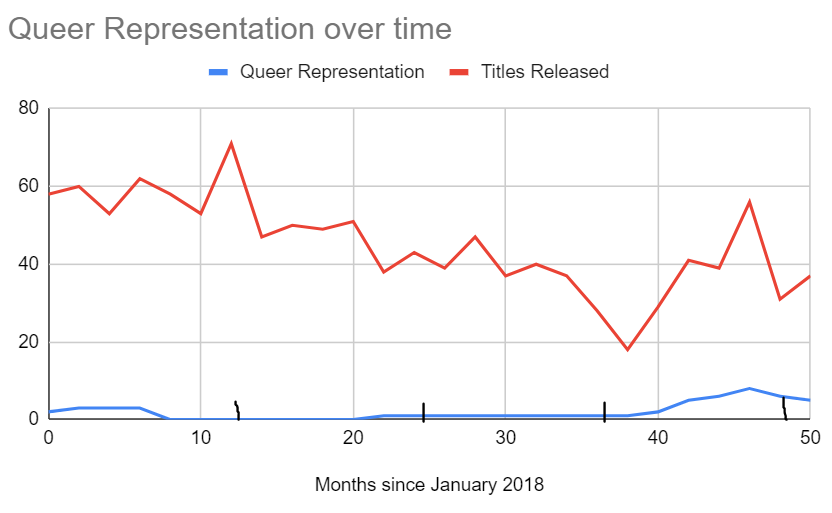 Over the next fourteen months, DC didn’t release a single queer book. Then over the next eighteen months, DC would only have one queer book on the market: Shade, the Changing Woman, which was followed by Sandman Presents: The Hellblazer. From March of 2021 on, though, queer books rapidly grew in number with a strong positive correlation at a rate of .43 (with an r^2 of .64). This swell of diversity still only reaches a peak of eight queer books released in a month, but compare that stat to 2019. DC released as many queer books in one month as they released in a specific twenty-two-month window during Rebirth. Queer representation has come a long way, and I hope it continues to grow over the coming months. 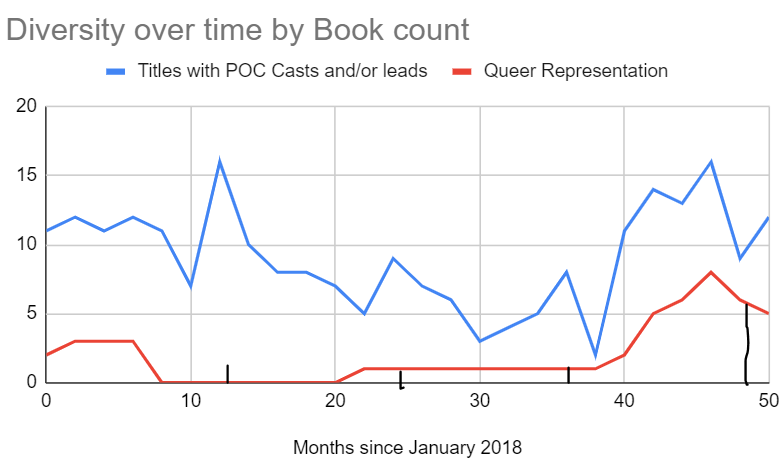 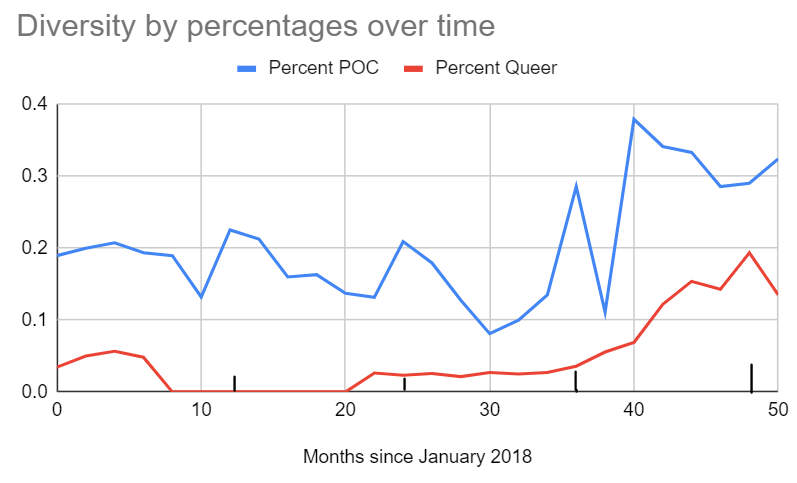