You are here: Home / Featured / Dawn of X: A New War For Survival Begins

“What we’ve really needed was a giant leap forward. Well, this is it.”

It’s a brave new world for Mutantkind. After decades of suffering and hardship, the species has found a haven in the new nation of Krakoa. But as enemies both new and old emerge to threaten them, how will mutant kind’s heroes adapt to face them? And how will these changes shape the future of Krakoa and its people?

In 2019, acclaimed writer Jonathan Hickman took leadership of the X-Men line, breaking away from what came before and laying the groundwork for his own grand designs on the title. Compressing and re-contextualizing the title’s history through his miniseries House of X and Powers of X

, Hickman reforged the “Mutant Metaphor” at the heart of the X-Men’ stories into a call to action: after suffering years of bigotry and infighting, the mutant species banded together into a single state, and finally declared themselves a sovereign power in the Marvel Universe. House and Powers didn’t just return the X-Men to form, it reintroduced them as a dominant political, cultural, and economic force. But this was just the beginning.

After the release of House and Powers, Hickman gathered fellow writers Gerry Duggan, Tini Howard, Ed Brisson, Benjamin Percy and Brian Hill to release an entirely new lineup of comics for the title. These books, collectively known as “The Dawn of X,” would take House and Powers’ intertwining approach and expand it across the entire line, having every title feed into the master narrative of mutantdom’s rise to power, and the trials by fire that will forge the nation of Krakoa.

“The Dawn of X books are the promise of that new world come to life.” States Senior Editor Jordan White. “They are the start of the new era that will change how we think of the X-Men, and the kinds of stories we tell with them. It all begins here.”

Curated by a handful of creators building on Hickman’s vision, the Dawn of X manages to feel both astonishingly varied, yet uncannily consistent. Pulling from every corner of the Marvel Universe and beyond, Hickman and his collaborators are able to weave a masterful story charting the foundation of Krakoa, and the many trials by fire that will forever shape the nation and its heroes.

Hope You Survive The Experience

The foundation of the Krakoan state brought massive change to the world of the X-Men. While much of the heroes’ past struggles were couched in the “mutant metaphor” and their otherness from humankind, Krakoa has given the species both a safe haven and a chance to forge new identities for themselves within the developing society. Hickman lays much of the groundwork for this theme in the main X-Men title, contrasting the development of Xavier’s oldest students alongside the nation’s.

With the X-Men effectively disbanded, many of its former members fill integral roles within the state. Longtime members including Jean Grey, Emma Frost, and Storm join Charles and Magneto on the quiet council, overseeing the larger matters of building and maintaining the civilization. Nightcrawler, spurred on by Krakoa’s larger cultural developments, deepens his role through his faith, effectively founding a national religion. Veteran soldiers like Wolverine lean into covert ops, structuring Krakoa’s military and training fellow mutants in their abilities.

With Krakoa’s reach extending beyond the bounds of the island, a number of Mutants discover new roles in the larger Marvel Universe. Kate Pryde, who is denied access to the Krakoan gateways, takes on a new identity as the Red Queen, securing the nation’s interests on the seas alongside the crew of the Marauder. Other former X-Men, like Rogue, Gambit, and Jubilee form a new Excalibur Team with Betsy Braddock, intervening in England and the mystical realm of Otherworld on Krakoa’s behalf. Each title in the Dawn of X follows a different team as they covet new identities for themselves, but through the main X-Men book, Hickman focuses this theme through Scott Summers and his family. Building on his role as a senior X-Man, Hickman reintroduced Cyclops in House and Powers as Xavier’s most loyal soldier, making the judgement call to send his fellow heroes on a suicide mission to secure the future. But through his dedication to his family and friends after their major victory, Hickman explores an entirely new side of this version of Cyclops, showing him as a man who will sacrifice anything and everything to keep the sanctuary he’s fought for. 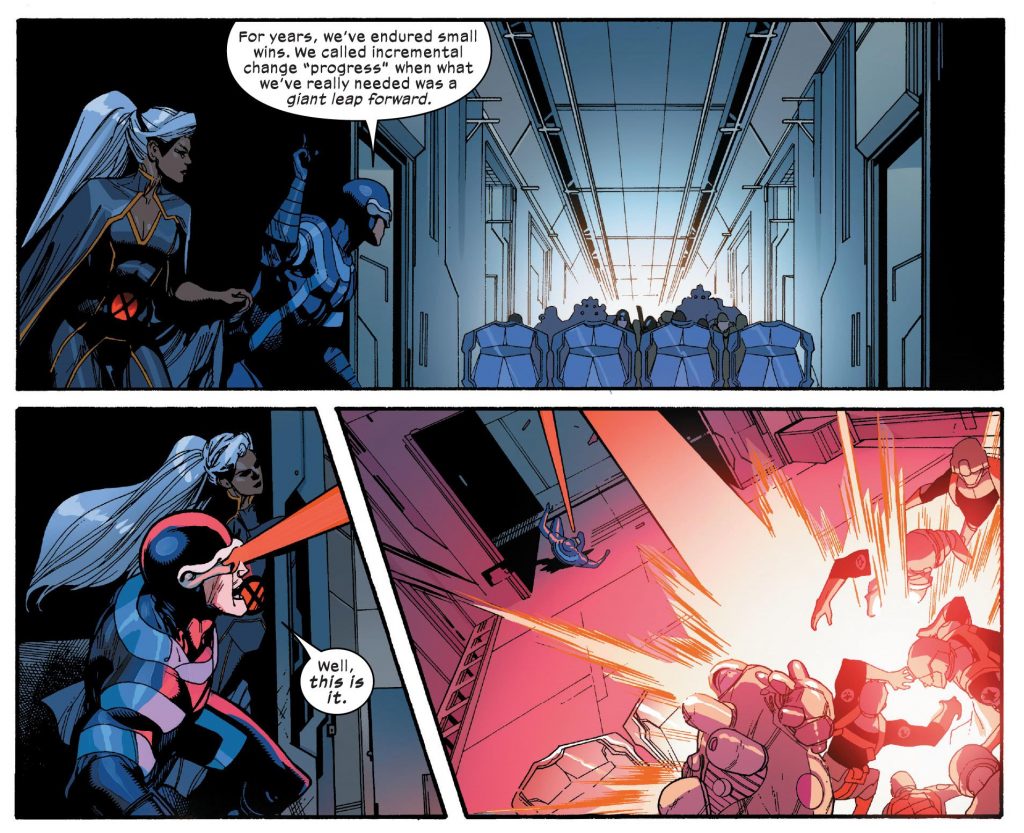 With Krakoa newly established as a power in the Marvel Universe, mutants aren’t the only ones seeking to reinvent themselves.The X-Men’s defeat of Orchis has pushed Mutandom’s enemies into more fanatical forms, with each faction attacking a different element of the nation. Seeking to cut off the mutant’s global reach, radicalized bioengineers like Hordeculture attack Krakoa’s supply of gateway seeds. On the mainland, anti-mutant groups like DOX spread propaganda and target mutants directly, leaking their personal info to violent bigots. And within the broken remnants of Orchis, Dr. Alia Gregor continues her work on Nimrod, the Omega Sentinel fated to destroy mutantkind in the future. However, one of Krakoa’s deadliest foes comes through the anti-mutant extremist group known as Xeno. Preying on mutants they’ve captured, Xeno builds their own brand of post-human soldiers, specially designed to strike at Krakoa. Through Xeno’s all-out assault on the nation, the united species is handed its first major defeat, and is dealt an immeasurable loss. 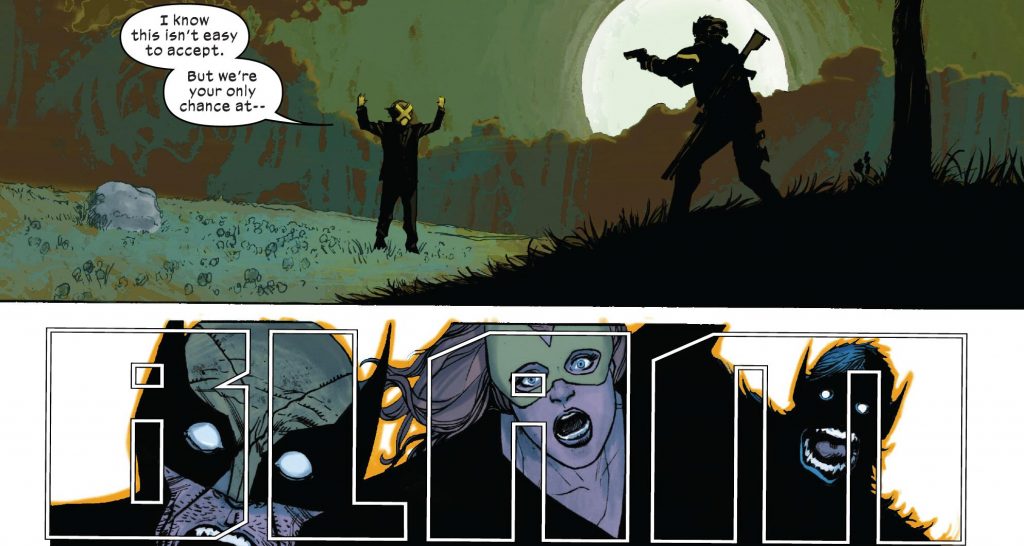 While Xavier’s death is only temporary in Krakoa, the event marks a major turning point in the nation’s development. Shaken by the loss of their founding father, the rest of the Quiet Council resolve to take the fight to their enemies, and slowly begin militarizing their population. Depowered mutants are given a violent trial-by-combat through Apocalypse’s ritual of the Crucible, which forces them to fight to the death to prove their worthiness of the x-gene. The council also targets Xeno directly, reforming X-force to destroy anti-mutant operations with extreme prejudice. Krakoa’s arming even casts a shadow on Charles’ return, furthering Hickman’s transformation of the character into a hardened-but-still-optimistic leader.

Mutandom’s heightened power gives it an even bigger spot on the global stage, but cracks begin to show within the developing state. Angered at his diminished presence in Krakoa’s Hellfire Trading Company, Sebastian Shaw begins double-dealing to Krakoa’s enemies, and mounts a coup against Kate and the Marauders. Another rogue element on the council is Sinister, who seems to have renewed his sadistic experiments on the mutant gene, further hinting at Mutantdom’s bleak future in House and Powers. Yet, the deadliest threat to Krakoa comes from Mystique, whose uneasy alliance with the council is tested as they refuse to resurrect her wife Destiny. As Hickman explores more of the characters’ past, he also plants a setup for something much more than a betrayal; hinting that Krakoa’s delicate union may soon tear itself apart. While Charles and his allies have finally won the sovereignty they’ve fought so hard for, the struggles to maintain their power show growing divisions between Krakoa’s state and its citizens, with each murky choice blurring the line between them and their enemies. The nation is due for a reckoning; one that will test the strength of its champions, and its unity as a people.

Since House and Powers, Hickman has steadily built the theme of mutant kind confronting its dark future, contrasting the hopeful idealism of Krakoa’s present against its dystopian final war with the post-human supremacy. This theme of the nation’s “shadow-self” is built upon further through the introduction of Arakko, which Hickman steadily builds up over the first few issues of X-Men. Initially depicted as peaceful people, the mutants of Arakko are quickly revealed as hardened, and vengeful, shaped by millennia of combat in a harsher, more brutal world.

Framed as a darker, stronger reflection of the mutant species, Arakko becomes the ultimate existential threat as the two nations are embroiled in the multiversal Ten of Swords Tournament. As “swordbearers” from each side are chosen and ready for war, The Quiet Council uses every underhanded method they can to ensure their survival, only to come up short against the superior might of Arakko. Pushed to the brink, Xavier and the council make the choice to seal off the gateway to Otherworld, mitigating the risk, but cutting off their campions’ escape. However, when their son Cable is trapped behind enemy lines, Cyclops and Jean Grey finally renounce the Council’s pragmatism, and make the desperate choice to reassemble the X-Men. 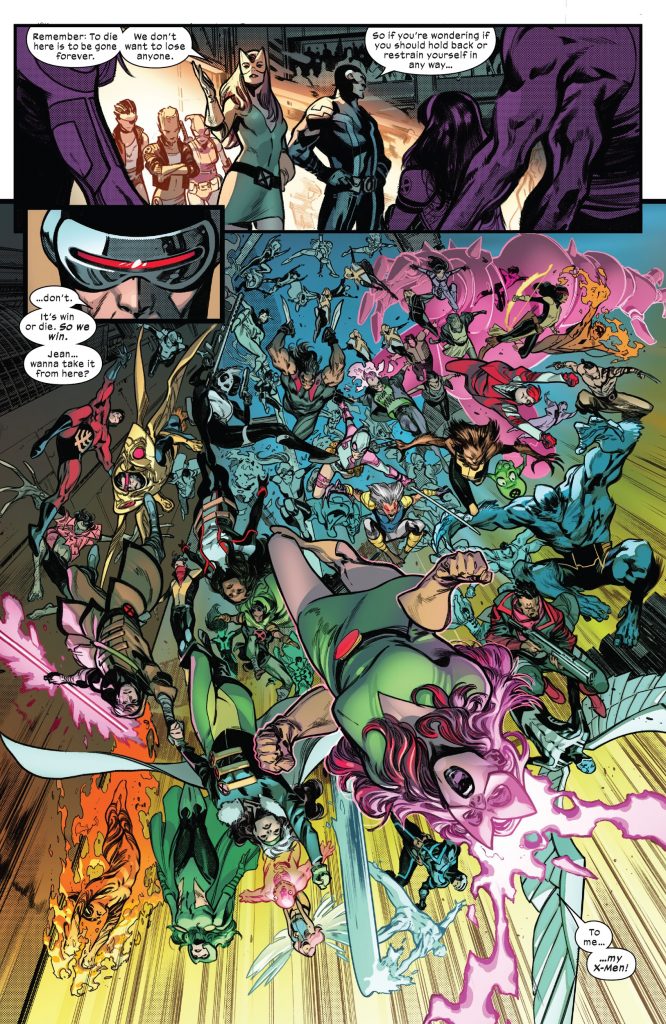 This devotion to family and unwillingness to compromise underpins X of Swords and the Dawn of X as a whole. The heroes’ reliance on one another gives them the strength in numbers to finally turn the tide of the last battle, with each title’s teams joining Jean and Scott in their last stand. This philosophy even transforms Apocalypse, who breaks away from his dedication to the survival of the fittest, and surrenders himself to Arakko for his people’s freedom. Emerging from Otherworld broken but victorious, mutant kind is once again free to forge a new chapter in its history.

This Is What Comes Next

Directly following Hickman’s sprawling, ambitious miniseries, the Dawn of X is a grand experiment in collaboration, both inside and outside of its story. Across the title, each book’s team lends their own distinct voice, whether through the intergenerational struggles of X-Men, the coming-of-age-slash pirate adventure of Marauders, the boundless spectacle of Excalibur and New Mutants, or X Force and Fallen Angels’ murkier tales of revenge and redemption. While the line gives its teams the freedom to tell their stories their way, the Mutant Metaphor lies at the heart of every book, weaving together something massive and operatic in scale.

“It’s not editorially driven,” muses Hickman, “It’s more organically driven. It’s really kind of fascinating because it all comes out of a process in a kind of team environment that I’ve never experienced in Marvel….And what we found is that some people are jogging, some people are sprinting. None of it feels like failure, right? We’re kind of still just playing around.”

Together, Hickman and his collaborators took mutant kind to astonishing new heights, setting the stage for an age of expansion dubbed “The Reign of X.” But even as these developments take the species out into the cosmos, the heart of the story remains with Krakoa, and mutant kind’s ever-evolving war for survival. As the species’ journey takes them into the fringes of the unknown, the creators of the Dawn of X issue one final certainty: Krakoa’s future rests with the X-Men.