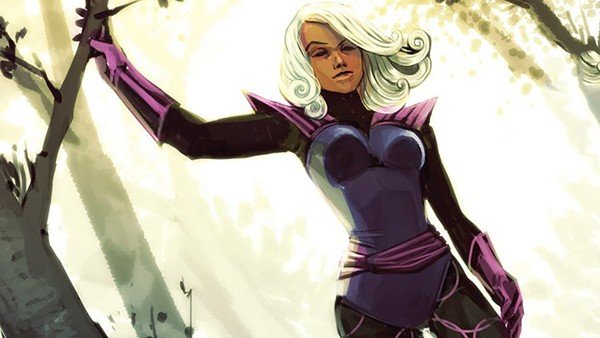 Having spent a lot of time as little more than a secondary character and love interest in Doctor Strange comics from the 60s to the 80s, it has taken until the 2000s to see her break away from the good doctor’s shadow and appear in titles away him, and until 2022 for her to be the main character of her own ongoing series, the upcoming Strange. So read ahead to get caught up on her comic history, as Clea takes her place in the spotlight ! 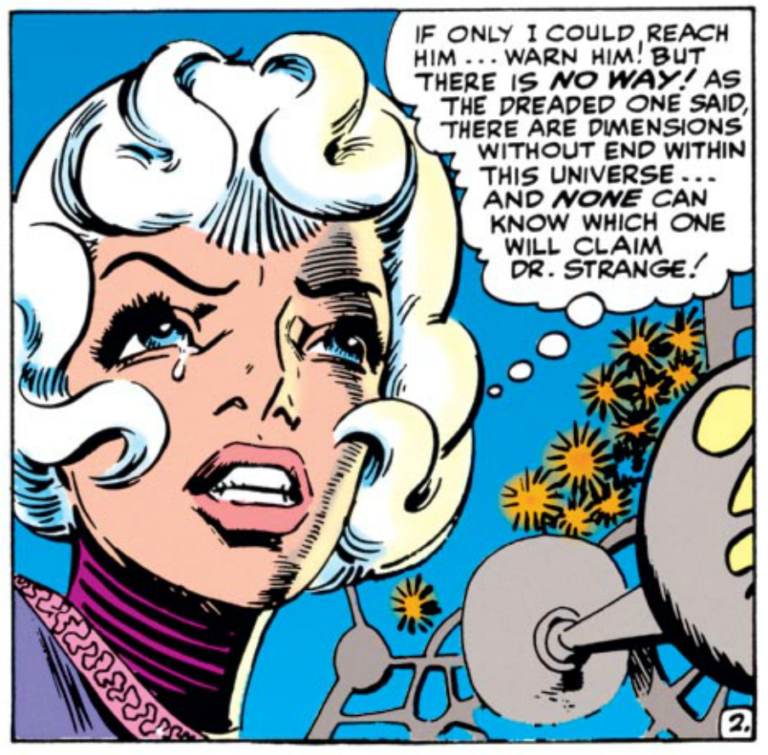 The Girl From the Dark Dimension

When Doctor Strange travels to the Dark Dimension in Strange Tales #126, he meets a young woman named Clea, the daughter of the disciple to Dormammu, ruler of the dimension. She helps Strange during his battle with the Dread Dormammu, and during their second battle, she even unleashes the Mindless Ones (monsters living on the fringes of the Dark Dimension) to distract Dormammu. The whole time, Clea isn’t even named, and only fulfills the role of damsel in distress and potential love interest. During one of their battles, Dormammu banishes Clea to other dimensions, which puts Doctor Strange on a quest to rescue her.

After numerous battles with Dormammu and Umar, Clea is now adapting to life on Earth, and gets caught in the Sons of Satannish’s sinister schemes (try to say that one three times in a row !).

Now living in the Sanctum Sanctorum and dating Stephen Strange, Clea usually stays behind alongside Wong, watching the Sorcerer Supreme’s fights from the outside.

Doctor Strange chooses Clea as his disciple and potential successor to the title of Sorcerer Supreme. She starts studying under him, and starts getting more involved in his battles against foes such as the Silver Dagger or her own father Orini ; and it is discovered that Clea is in fact the daughter of Umar, and niece of Dormammu.

Although she is now his disciple, Clea resents Doctor Strange for not letting her to help in his battles. The two of them travel back to the 18th century… and Clea has an affair with Benjamin Franklin? Why not!

After a few background appearances in previous issues, Clea starts being more involved with the Defenders’ adventures, here helping to rescue her friend Valkyrie.

Clea now plays the role of the Defenders’ resident magic expert whenever Strange is away, specifically developing a close bond with Valkyrie, whose suit she redesigns. In issue #53, Clea has a short solo story fighting the evil sorcerer Nicodemus.

Clea and Stephen travel across dimensions to rescue Wong, and Clea starts doubting herself and questioning whether she deserves to be Strange’s disciple.

Clea makes a few appearances working with the Defenders.

Clea accompanies the Defenders in several of their adventures, and is corrupted by Mephisto when Satan invades the Earth.

In Marvel Fanfare #5, the evil Nicodemus is back, and Clea has to battle him once again.

As her training progresses, Clea gets her own grimoire ; but she makes the decision to go back to the Dark Dimension to lead a resistance against the tyrant Umar. 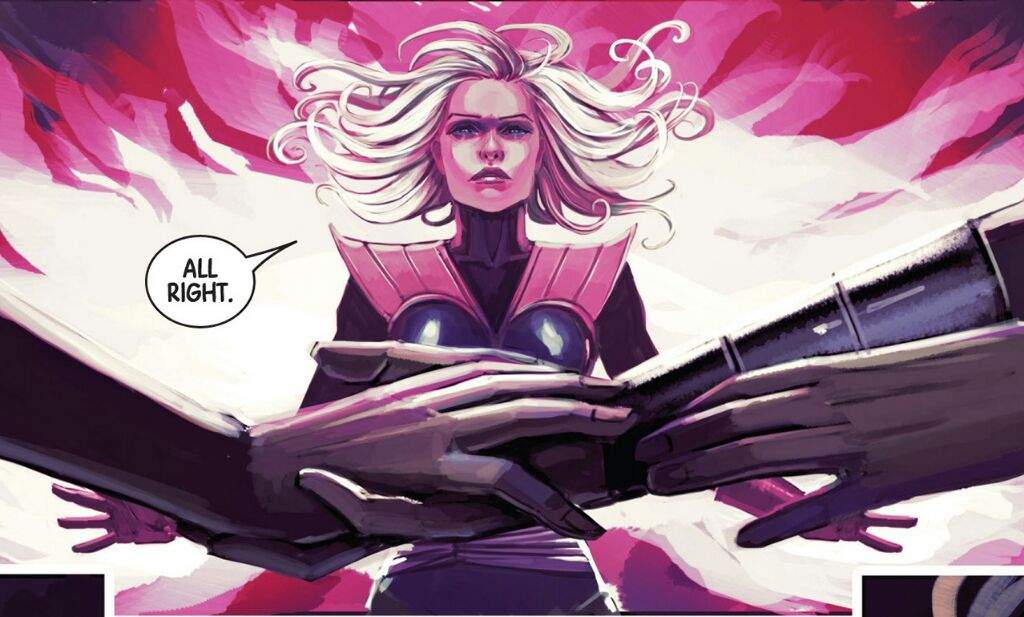 Now leading the rebellion, Clea learns that she is Umar’s daughter, and with Doctor Strange’s help, she battles to free the Dark Dimension from her control. She finally becomes its new ruler in the uncollected Doctor Strange #74, a Secret Wars II tie-in issue (dear gods).

Now mystically engaged/married (it’s unclear !) to Doctor Strange, Clea rules over the Dark Dimension, including in a solo series in Marvel Comics Presents #20 (sadly impossible to find, even on Marvel Unlimited !).

The rest of the run, though uncollected, contains many more Clea appearances ; including being visited by a faltine, one of the ancient magic species Dormammu and Umar are a part of in Doctor Strange Sorcerer Supreme Annual #2. With the faltine’s help, she leaves for the Dark Dimension in #43, deposing Umar and Mordo and accidentally freeing Dormammu in #48. A battle ensues in #50, after which Clea decides to stay in the Dark Dimension to fight the Dread Lord’s forces. In Annual #4, members of her resistance sacrifice themselves so that she can contact Doctor Strange for help, and the story of her war against Dormammu continues in #73, #75, #78 and #83.

In this alternate future for the Marvel universe in which everyone on the planet has superpowers, Clea became Sorceress Supreme after killing Doctor Strange.

Clea joins the Defenders, in exchange for their help for taking back the Dark Dimension.

In The Otherworld War prequel one-shot, Clea helps the Howling Commandos during WW2, when the Red Skull opened a door to the Dark Dimension.

Fearless Defenders Vol. 2: The Most Fabulous Fighting Team Of All

Asked for help by her friend Valkyrie, Clea brings back to life Annabelle Riggs, leading to Valkyrie and Annabelle having to share the same body. During a battle, she comes across Doctor Strange and asks him for a divorce, after having seen him cheat on her with several different women.

In 2016’s Doctor Strange Annual #1, Clea helps Doctor Strange and Wong fight a demon, and wants to end her and Stephen’s mystical marriage to avoid drawing away the little power he has left in him. Later, in issue #389, Clea and Strange have lunch together, as he tells her about his recent battles in the Damnation event.

Clea also appears in issues #4 and #9 of Asgardians of the Galaxy, helping out her friend Valkyrie and the rest of her team.

Clea is one of Doctor Strange’s allies in the battle against Galactus across mystical dimensions. 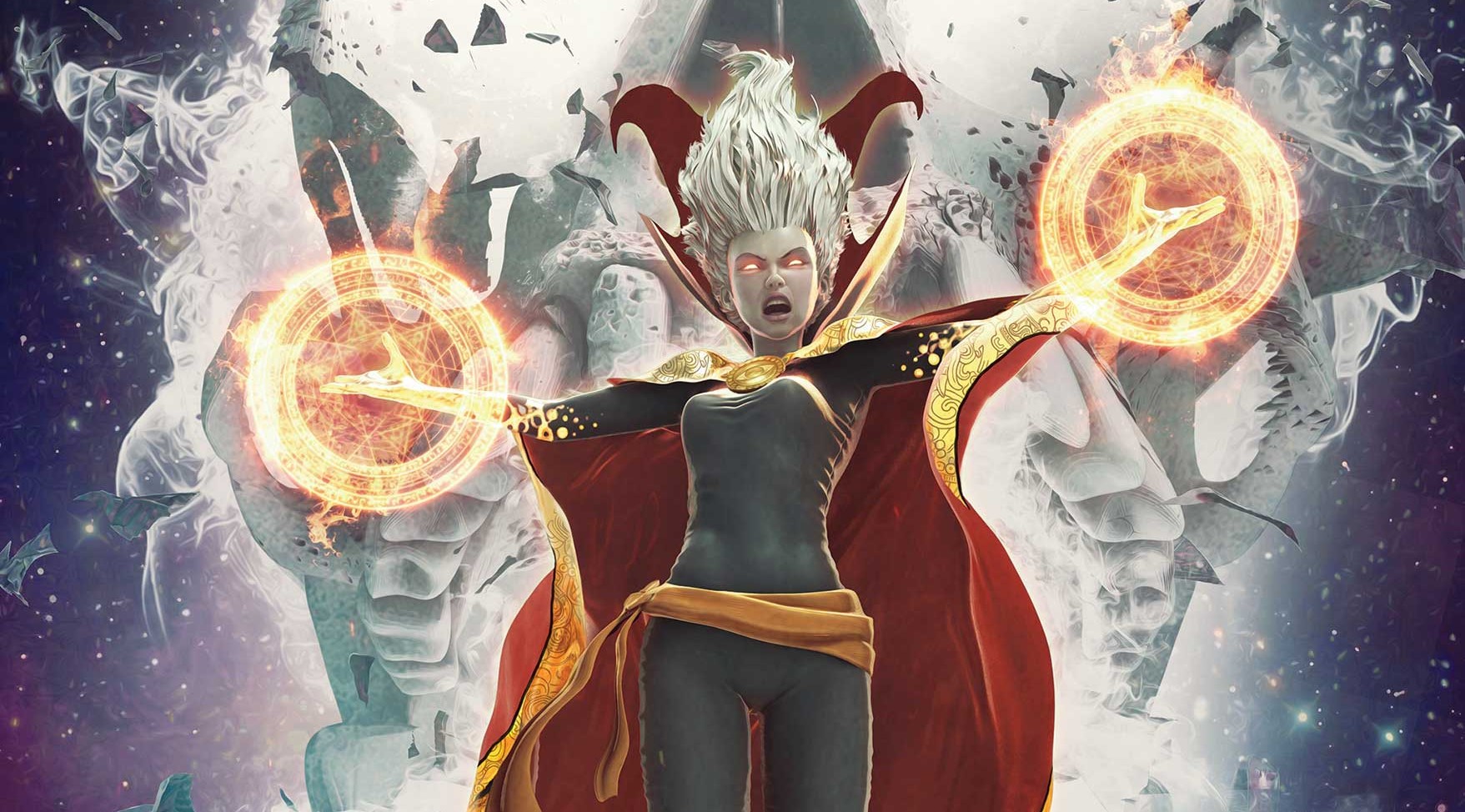 In the aftermath of the Sorcerer Supreme’s death and the invasion of Earth by several mystical warlords, Clea is among the sorcerers fighting to save the Earth, and by the end, she takes a new center place in the magic side of the Marvel universe.

You can find the full event reading order here.

In this upcoming series, Clea is the new Sorcerer Supreme, trying to assume her new responsibilities as well as bringing back Stephen Strange.