Things are still falling apart in the Marvel universe, but the Avengers have had a victory, after fighting back the Builders and Thanos in Avengers by Jonathan Hickman Vol. 3. For the Illuminati, it’s a Pyrrhic victory. The death of everything is still coming. And now, the chaos that comes with that begins to seep into everything else. Things are unraveling, and the heroes begin to realize why.

If Infinity was an epic story, touched with character moments, then Avengers Vol. 4 by Jonathan Hickman and a host of artists, is focused on the characters, using the epic moments to bring us closer to them. And the question these characters are forced to ask themselves is – what have they become?

The Avengers, the ones who know nothing about the collapsing multiverse and the doom of all things, are suddenly forced to deal with their evil counterparts, fugitives from a dying universe. Action, adventure, thunder and lightning ensue, drawn by Salvador Larroca, with plenty of time for the clever What If?s that all good mirror dimension stories have. All of which is fun. But the crux of this particular story lies with Bruce Banner, and his conversations. First with the sociopathic Bruce Banner of another dimension, then with the arguably sociopathic Tony Stark of his own.

The twists in stories of alternate dimensions, alternate selves, all serve to ask the question:

How close was I to being that person?

How close am I now, to becoming them? 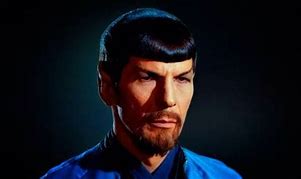 Maybe the beard’s the giveaway. Tony’s got one too, after all.

This story doesn’t just serve as a fun What If?, and it doesn’t just serve to create evil foils for our heroes, although it does both those things well. It also begins dissolving the lines between the Illuminati and the Avengers, as things skew more and more towards entropy.

And speaking of the Illuminati, they’ve been busy. They’ve built The Bridge, a device that lets them view other universes, in the desperate hope that someone, somewhere, has found a solution to the end of all that is. In arcs drawn by Simone Bianchi and Rags Morales, they try desperately to find hope, and watch universe after universe die, with alternate versions of themselves failing to protect them.

From the beginning, fatalism has been a major theme for Hickman. Now, we see heroes, villains, ordinary people, all die, without hope of salvation. And the Illuminati watch it all happen, and know they might be next.

Until they find the Great Society, of Earth 4,290,001. Led by Sun God, the Great Society manages, against all odds, to stop their world from ending. Not only that, it’s immediately obvious they’re good people. Staunch. Moral. Heroic. Funnily enough, the Great Society bears a striking resemblance to the Justice League.

Our universe’s Reed Richards starts his rousing speech with an acceptance that everything dies. Every universe we’ve seen has a speech that starts the same way. Resignation.

Except for Sun God.

Everything lives, he tells his friends, his teammates, the reader. And then he goes and proves himself right. There’s no moral compromise, and no questions. They stop the destruction of both earths, save both universes. They are heroes.

It would really be too bad if the next world they met was full of people willing to make the moral compromises they aren’t.

And speaking of people who refuse to compromise their morals, how’s Captain America doing? You know the guy who, way back at the beginning of Hickman’s run, refused to have anything to do with the Illuminati. The one whose mind they wiped. It would be a shame if he remembered everything. Remembered the collapsing multiverse. His friends’ plans to blow up worlds. That would sure make things hard on the Illuminati. On his buddy Iron Man in particular.

But what are the chances of that? 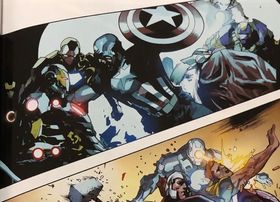 Pretty high, as it turns out.

What’s less likely is Cap and the Avengers being sent on an Odyssey through time, but that happens too. Leinil Francis Yu draws this arc, drawing on an ability to show emotional depth and acting for his characters, right next to hyper-detailed, sci-fi futures of all sorts. But before that second thing, Steve Rogers confronts his friend, his brother, Tony Stark.

One of the cornerstones of storytelling, is getting a lot of information into a small space. You don’t want a scene that’s only plot, and god forbid you have a scene that’s only exposition. You want your scenes to function as more than one thing. You want plot, you want character, you want theme, you want emotional resonance. And you want them all delivered naturally, nothing shoehorned in. Steve Rogers’ confrontation of Tony Stark checks all those boxes.

The plot reveal, along with the emotional resonance of betrayal. The theme of things falling apart, not just the world, but their friendship. 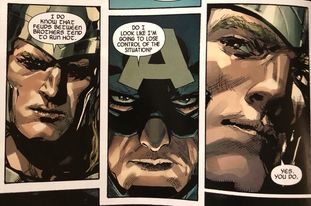 And shortly after, they’re off, on a journey through time, through the future. With the Illuminati revealed to Captain America, the fatalism they’ve been dealing with becomes a part of the Avenger’s story.

Captain America sees how things turn out. He see’s inevitable consequences, inevitable results. Not only that, he sees the inevitability of his character. Who he is defines his actions. And his actions define his fate. Just like everybody else. 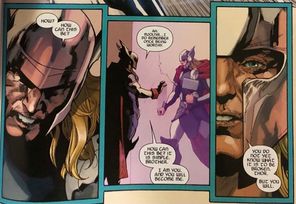 And as the Avengers barrel through time, forced to look at their fate, the Illuminati meet the Great Society, and face up to theirs, in an arc drawn by Valerio Schiti and Kev Walker. In this collection, we’ve seen Avengers fight Evil Avengers, Illuminati watch failed Illuminati, and now, we see the Illuminati fight the Justice League Great Society. As we’ve seen throughout, the action is well done and well-drawn, but the emotional thrust comes from the character’s themselves.

Will these brilliant, well-intentioned people, be willing to kill good men and woman, be willing to kill an entire world, in order to save their own? The other-dimensional foils Hickman has introduced throughout this collection hit their climax now, and the Illuminati are faced with the choice they’ve been dreading since the beginning.

The volume’s epilogue is deceptively quiet. The Illuminati have seen who they are. Who they’ve become. And now they have to live with themselves. They talk to friends, or family, or sit alone. They’ve made their decision. And now there’s nothing to do but wait for what comes next.

A series of quiet moments, building to an ending that is anything but quiet. In three pages, the epilogue turns on its head, a series of reveals that changes the world our characters live in.

Hickman’s Avengers run is far from over.