You are here: Home / Featured / And She Was Loved: Harley Quinn and the Birds of Prey

1-4 by Amanda Connor and Jimmy Palmiotti. The very queer and vibrant four book series catapults Harley and The Birds of Prey into the spotlight, providing a sequel to their beloved series Harley Quinn

and Harley Quinn and her Gang of Harleys

.  The arc is comical and refreshing and we get to see another side of Harley that provides depth for her character. While the Joker is still present in the book, he is not the focal point and is rightfully seen as the piece of trash many Harley fans have come to view him as. The Gang of Harleys, the Birds of Prey, Power Girl, Red Tool and Poison Ivy all help amplify the brilliance and complexity of Harley Quinn’s life. I am forever grateful for this series. Not just because she is a relatable Gemini Jewish girl who can’t tell her butthole from a hole in the ground – but because she is resilient and misunderstood.

Harley has been a beacon for many misunderstood ladies who get the worst from the world but remain vigilant in their causes (sometimes). It is touching to see a formerly abused woman to find solace amongst friends who appreciate and respect her for who she is. It’s no secret that Harley has mental illnesses, and the patience needed for her is such an important part of why she has to find the right tribe. Living with mental illness myself, identifying the complexities of finding and sustaining true friendships is quite the battle. While my life isn’t as wacky or exciting as Harley’s adventures, I see myself in the struggles that she faces and recognize that I too have my own set of family that treat me as I should be – as a human being, doing the best I possibly can. Amanda and Jimmy have a firm understanding of what Harley experiences within her life and this book in particular hits the issue right on the head.

No Sleep Till Gotham

The first issue opens with Harley and Poison Ivy lounging on an island. Red Tool is there as their faithful man servant. Here, they languish in the sun and are served specialty shots by Superman. Yes, this is a dream of course but a perfect set up to a most chaotic series of events. Harley awakes in a bed filled with her crew of Harleys in Coney Island.  Despite her efforts at finding solace in her own world, Harley is plagued with problems. Ivy isn’t talking to Harley due to a stunt that Harley pulled on a vacation, and her crew have just lost their headquarters, The Dreamin’ Seaman. Having missed her ‘mortage’ payments to the DeFeo Mafia, Harley is at risk of losing everything she cherishes. After an insightful conversation with her crush Power Girl, Harley decides to get the cash needed from Joker.

Of course, Harley takes on the responsibility of taking care of everything on her own and ends up having to go back to Gotham, despite her friends advising her not to. But since when does Harley listen to anyone except her trusty Beaver or her friends in her head? One of my favorite things about this comic is that no matter what, Harley has a gang of folks who are willing to help her out. However, Harley decides to ditch the help, vowing that all of this was of her doing and that she would have to deal with the Big Boss on her own. Ditching Red Tool and the Harleys, Harley Quinn arrives in Gotham to a warm welcome from Joker’s cronies. Luckily for her, The Birds of Prey are ready to help her at any cost.

Below and Beyond the Call of Doody

Harley arrives in Gotham and chaos comes along with her! After being told by The Birds of Prey to get out of town, Harley escapes with the help of Atlee, who busts her out of an awkward situation with GPD at a diner. Harley is able to convince Atlee to help her get to the money Joker owes her. Joker is trash as usual, abusing another Harley named Harley Sinn. Once the GPD show up to his compound, he knows the call of war has been sung between himself and his former girlfriend. Harley ends up getting into his vault and seems to have gotten off scot-free… until she ends up at the Wayne manor, looking for cookies, candy and ham (totally not kosher). Everything is looking up for Harley – except that the jewels and money that she took from the vault just so happened to contain the valuables of notable Gotham villains. Atlee is one of the best parts of this book, especially her naivete when it comes to Harley discussing her relationship with Ivy. Joker is locked up and helpless and we don’t see too much of him here. It’s the little things. 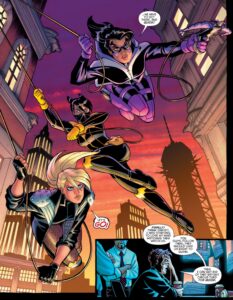 Harley turns in the money to GPD in order to get the handsome reward. Her plan worked after all – revenge against the Joker and enough money for her to get a new set up for her friends and family. Not knowing that Joker was a local accountant for Gotham’s most evil villains, she does a hammy job announcing her victory. In response, Joker teams up with the other villains in Arkham to take Harley down once and for all. It’s pretty funny that Harley has the opportunity to work with the cops and take refuge at the Wayne Manor, considering all of the wild stunts she’s pulled and her long history of actively hating both parties. After giving all of the loot to Montoya, Harley (having done her one good deed for the day) proceeds to finish off Benny and get to her one and only love, Ivy. But with the contract on her head and not knowing that Joker had broken out of jail, Harley is oblivious to the clear and present danger she is in. The art in this book is amazing and there are a lot of hilarious moments such as when Harley drunk dials Ivy while getting the royal treatment at Wayne Manor.

Flowering Inferno is the final book in the limited series and it is a doozy. Following Harley’s lack of boundaries, she ends up at Ivy’s apartment with a gift. Joker has taken Ivy hostage within her own home and now has Harley ensnared. The abuse that has haunted Harley has now spilled over. With her soulmate in the clenches of her toxic ex, Harley has no choice but to surrender. It’s horrific, the type of trauma Joker put Harley through. Physically and emotionally, she is tormented by what she thought she had gotten rid of for good. The pain Joker puts Harley through is a bit much, so I would advise caution when reading. Joker’s horrendous actions are ended when Ivy reigns supreme, but Harley is injured so badly that she ends up in a highly Christianized scenario between G-d and the ‘Devil’ (odd considering that she is Jewish). She is deemed unfit for either (makes sense) and is sent hurdling back to Earth to be with her love and family. In a really sweet scenario, the Birds of Prey have to take care of Harley as she heals from the horrendous fight. They take turns taking care of her, eventually becoming annoyed with her antics. The love is still present, but the boundaries have limits. Talk about harm reduction!

Harley Quinn and The Birds of Prey is definitely on my favorite Harley Quinn comics list. Though I wish there were more instances of her Judaism within the series, the arc is written perfectly and Amanda really speaks through Harley. As mentioned, the art is very flashy, poppy and chaotic, which are all of the elements I like to see and feel in a Harley Quinn series. Appreciating Harley as the messy, complex being that she is comes easily to Connor and it takes us on a road to understanding people in our lives who may also be the same. People with mental illness face a stigma of being difficult when they cannot be ‘normal’ and yes, it can be emotionally draining. However, with proper boundaries and support, we can sustain strong friendships and relationships. Harley definitely needed to learn boundaries with Ivy when she was drunk dialing, but I also sense that since she was in a chaotic situation, she needed to reach out to the one who understood her most. When those we love are in crisis, sometimes all they need is that attention or help. The Birds of Prey, The Gang of Harleys, Red Tool (DC’s Deadpool) and that damn Beaver are going to make sure that Harley lives her best life. Hopefully, she will be written to realize that she doesn’t have to worry about falling into the wrong, abusive hands, once again.