Tom Taylor’s a big deal in 2021. He spent years writing the Injustice and Injustice 2 comics, he monopolized DC’s 2000s zombie-era nostalgia comics with DCeased, and has just recently taken over the Nightwing book to great excitement from a lot of people. And that’s not even half of his career. It’s safe to say he’s a big deal. But I’ve never been convinced.

Taylor’s style always felt to me that it was prioritizing characterization and “canon” over exploring themes and ideas with the characters. And while that’s enough for a lot of fans, it’s not what I look for in my comics. It feels like all fluff with little real substance.

But I didn’t always feel like this. In fact, when I was first getting into ongoing comics, Taylor’s All-New Wolverine

was one of my favorite books to read from month to month. Laura was a phenomenal character, and the perfect successor to Wolverine. As a fan of the characters and someone whose tastes hadn’t solidified yet, I loved it. So with the All-New Wolverine omnibus coming, I figured now was as good a time as ever to revisit this run, and see how it held up outside of its zeitgeist. 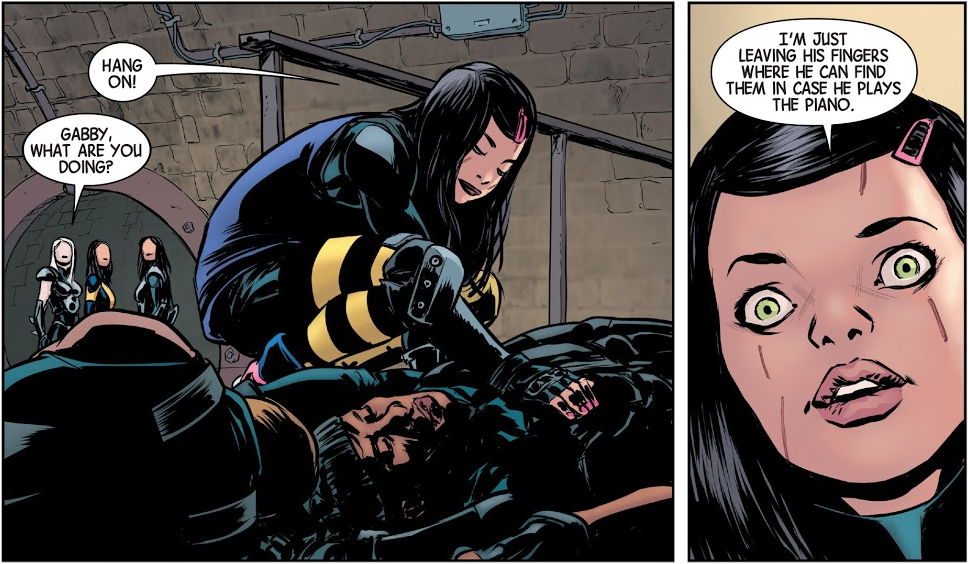 Right away, from the very first issue, the book lets you know what it’s about. Yes, there’s some mystery around this assassin who looks exactly like Laura, but that’s not what the run is about. The most important scene in this first issue is a flashback to a conversation between the now-deceased Logan and Laura, from back when both of them were on X-Force. Laura expresses remorse for not killing an enemy when she had the chance, and Logan immediately shuts that down: “Killing people is easy. I’ve killed loads of people. So have you. You know what’s hard? Fighting it…. You’re the best there is at what you do. But that doesn’t mean you have to do it.”

Now, I’ll admit. I’m a massive Logan fan. As a character he is incredibly tragic in a way that continues to be compelling to me to this day. And as a legacy title for him, as the story of his daughter taking up his name after his death and looking for the same redemption he spent his entire life seeking, this is the perfect way to begin. Laura is an all-new Wolverine, but she is wracked with the same struggles as the old one.

But where Logan’s arc has been a paternal one for so long, Taylor brings in a new idea with Laura. Instead of Logan’s guilt at failing his children causing him to try and make up for it as a father figure in so many younger people’s lives, Laura is one of those younger people. She isn’t maternal, and forcing her into that role would not serve anyone else. So Taylor brings in the concept of siblings – what if Laura had younger sisters?

This concept is so incredibly potent – Laura has just lost her father and now has to raise her sisters. It’s such an immediately tragic hook for a series that remains incredibly simple. There’s no weird continuity hooks, no twists and turns. It’s just this family bound by pain and suffering trying to be something different. And when Taylor gets to dig into this premise, when the book deals with its emotional core, it’s fantastic. All-New Wolverine made thousands of people into lifelong Laura Kinney fans, myself included.

Where the book stumbles, where Taylor specifically stumbles, is with the plotting. It’s not always a problem, and the arcs where the story works are some really great comics, but Taylor’s plotting is a consistent weakness that plagues the run. This is most noticeable in “Enemy of the State 2”, the centerpiece arc and emotional climax of the run. 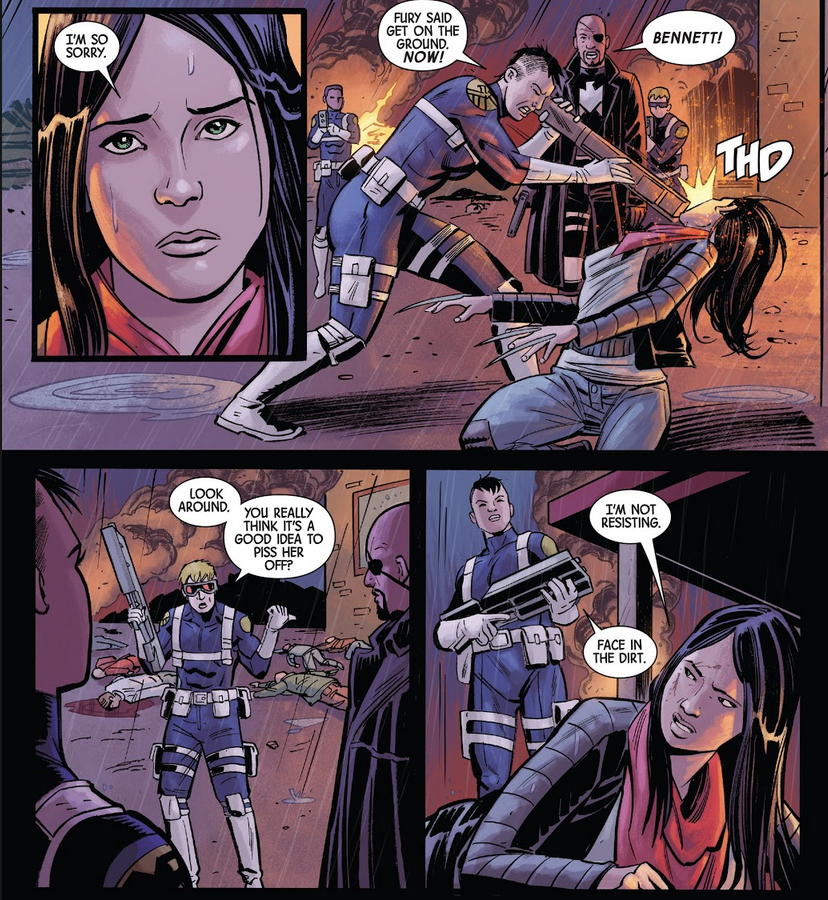 As a story about Laura’s trauma and her moving past it, “Enemy of the State 2” is fantastic. It’s a culmination of pretty much all of Laura’s character history up to that point – her trigger scent, Kimura, the trauma she had to endure. It is the final triumph she’s earned over her past, the last harrowing step to finally be able to move past the Weapon X program.

Where this arc tends to struggle, though, is in its connective tissue – the plot beats that serve to get us from one character beat to the next. The story is driven by very contrived conflict, where SHIELD agents brutalize Laura and treat her with active malice – despite them knowing that what she does under the trigger scent is literally out of her control and the fact that she’s being incredibly cooperative up to a point. It’s legitimately infuriating to read, putting a damper on the entire arc – there’s no reason for any of this to happen beyond Taylor needing a reason for Laura to be at odds with SHIELD, and he could have easily created a situation that didn’t feel so unnecessary. 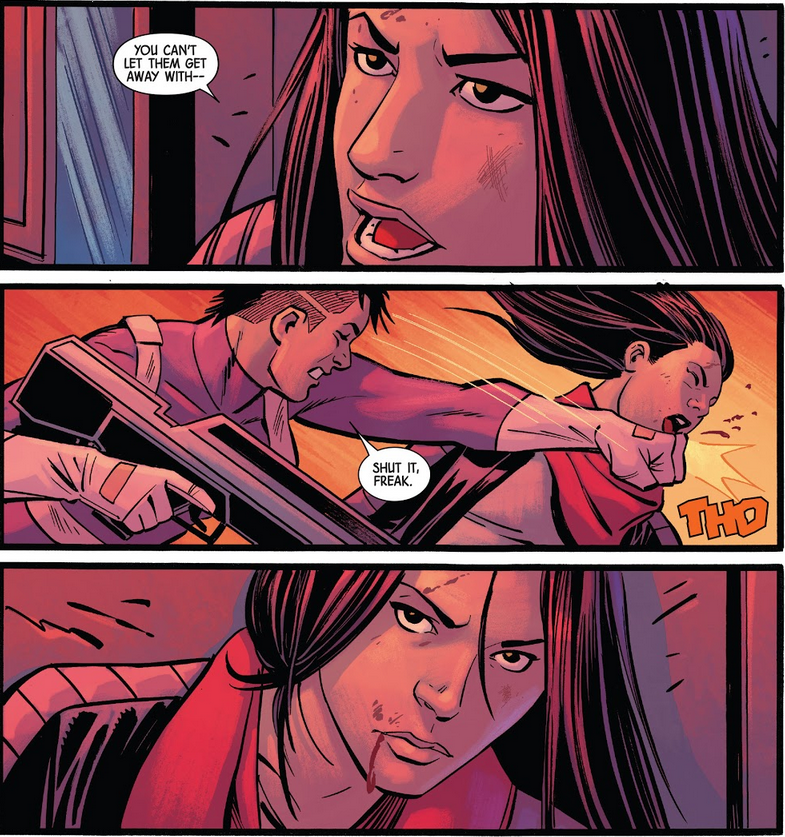 “Enemy of the State 2” is easily the strongest arc of the run, though – it’s where Taylor’s character writing is at its strongest, and its climax feels the most emotionally satisfying way to cap off what is honestly a decade’s worth of character development for Laura. It’s a little frustrating, then, that right when Taylor starts a new premise for the book – right when he figures out a new path forward for the character – the series abruptly ends.

Orphans of X is a fascinating arc because it’s quite honestly the most successful plot-driven thing Taylor’s ever written, at least that I’ve read. And I’ve read a lot. The story’s genuinely compelling – the children of those victimized by the Weapon X program have declared war on all of the program’s unwilling participants. It’s a conflict where the antagonists have understandable goals – these are people who lost their parents to these weapons and justifiably want justice for it. It’s tragic, then, that these weapons are victims themselves, who want nothing more than redemption for the sins they were forced to commit. Everyone is hurting here.

It’s made even better by Juann Cabal’s gorgeous art, bringing a crispness and clarity to the book that refines the entire idea of what an All-New Wolverine can be. No more Frank Milleresque scratches and impressions of the violence that Logan’s always lived in, no more Steve McNiven masculinity. Cabal make everyone in the book pretty, even the men – and in a way that doesn’t feel upsetting like David Marquez’s one page drawing of Logan in X-Men Gold #30 (seriously I hate it). Cabal shows us how Laura as Wolverine offers a new visual style to the title. Which again, makes the series abrupt end feel frustrating. 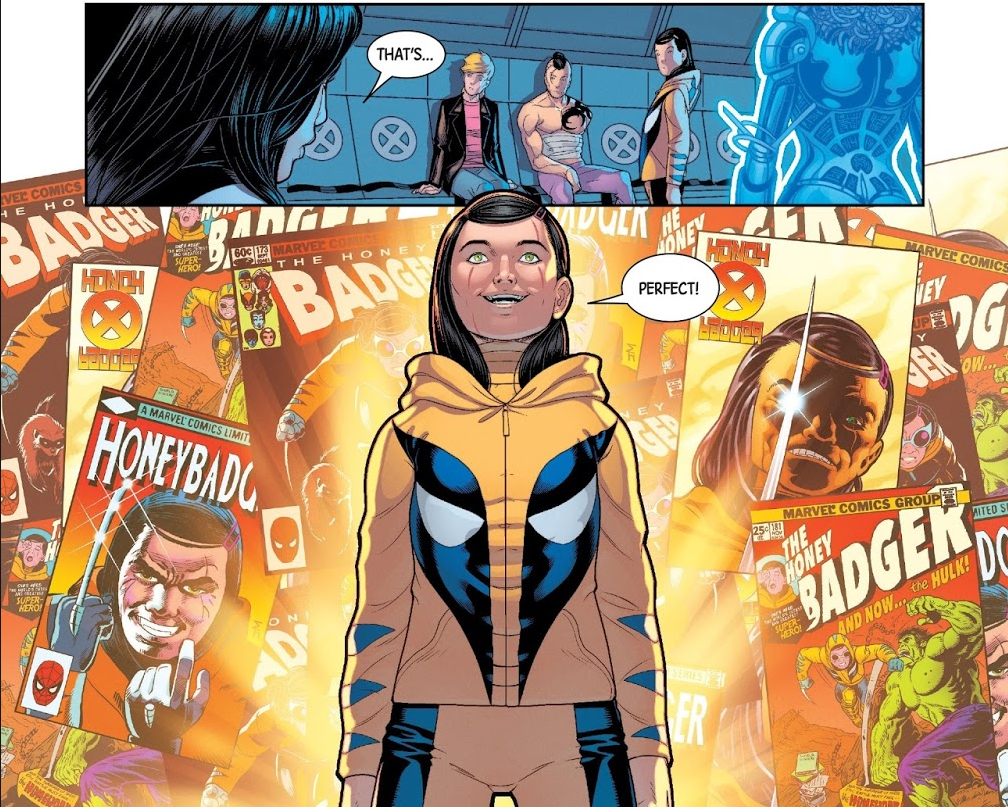 Right when the Orphans of X arc is resolved, right when this new direction for Laura as a character is introduced, the series suddenly jumps decades into the future to do an “Old Woman Laura” story that serves as the grand conclusion to Taylor’s run. As people who were paying attention to the series as it was releasing may remember, this arc started around the same time as the announcement that the series would be ending and Laura would be going back to her X-23 mantle with Logan’s return. Suffice to say, this was clearly a rushed ending, and one that felt like it was spitting in the face of what made this series great. It didn’t help that the arc itself was maybe the worst of the run.

The entire premise is that in this made up future, Laura has become Queen of Madripoor and the world is almost a utopia – the only remaining bastion of evil is Latveria, where Doom has imprisoned Bellona, Laura and Gabby’s remaining sister. And while the story of Laura and Gabby’s final quest being to release and redeem their estranged sister is really powerful, it’s mired in all of this Alternate Universe nonsense that ends up feeling more like Tom Taylor’s fanfiction than it does an interesting world.

The world of “Old Woman Laura” features Kamala Khan as President of the United States, Laura married to Hellion (a character who hasn’t appeared once in the run so far), and, most uncomfortably, Gabby dating someone named “Taylor”. The gender-neutral name isn’t what’s upsetting, it’s Tom Taylor’s choice to use his own – it makes the whole thing feel really uncomfortable. And by the end of the arc, the premise of “Laura is dying and chooses to do this one last act to save her family” is subverted, making the whole thing feel pointless. Because it kind of is! It’s a sour note to end an otherwise genuinely enjoyable run, and I think the whole thing would be better off if it just ended on the last issue of “Orphans of X”. Oh well.

Ultimately, though, All-New Wolverine certainly holds up on reread. Taylor’s signature quirks are visible, but they don’t take over the character writing and occasionally strong plotting he brings to the title. It’s a really strong case for Laura’s existence as Wolverine (which is thankfully being prolonged in the current X-books) and a fun introduction for Gabby, who’s being written very well in Vita Ayala’s New Mutants

. While the art isn’t always on the level of Cabal’s, the book is ultimately a joy to read, even in its weirder, less character-driven points. It’s very clear why so many people fell in love with Laura Kinney, and it’s really satisfying seeing her get the spotlight she’s always deserved.