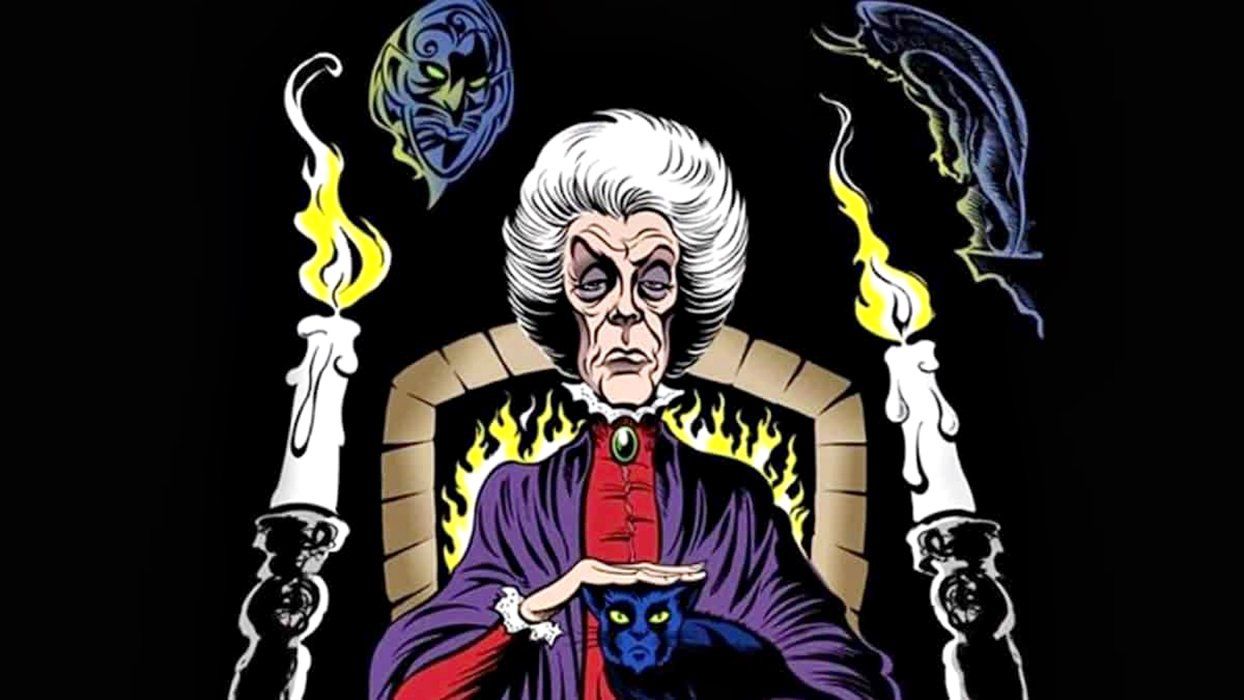 With Agatha: House of Harkness coming our way on Disney+, I’m sure many people want to know more about her. She started off as Franklin Richards’ nanny, but – as time passed – she started helping the Fantastic Four in more significant ways with her magical powers. Later, during an adventure with the Avengers, she announced that she would help Scarlet Witch with her studies.

Even though she sometimes meets the Fantastic Four again, her most important (and the best overall) relationship is with Wanda, the Scarlet Witch. I mean, Agatha in the Scarlet Witch (2015) comic is pure gold, you’ll see.

Lately, she’s been showing up a bit in the Captain America stories. And I bet she’ll appear even more; Marvel obviously has plans for her (at least in the MCU), and a lot of fans loved her in WandaVision. If you already like her or want to know more about her, there’s no better time than now. 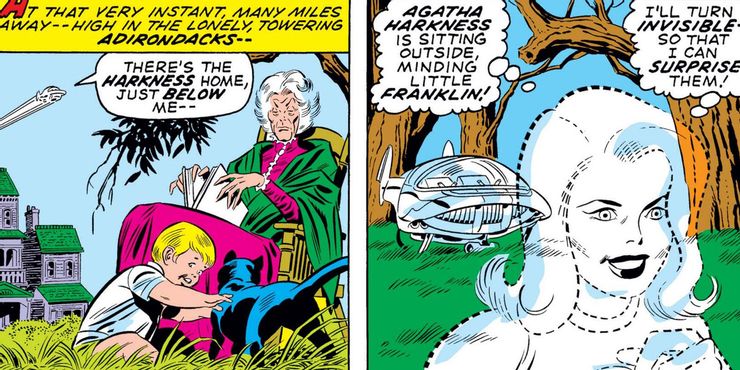 Franklin Richards is only a baby and the FF doesn’t want him to be in danger, so they take him to a nanny, Agatha Harkness. At the time, they didn’t know she was a witch, but there were a lot of clues and, already on their first encounter, she helped them beat some villains. Some of them are even terrorized by her cat, Ebony, that can transform into a demon-like creature.

Agatha shows up to help the heroes with her magical powers. You’ll see all the witchy stuff you can imagine, from crystal balls to astral projections.

Agatha seems to have some sort of precognition or a bigger understanding of things that will happen in the future. She warns the FF that great danger is coming (I don’t know how someone called the Air-walker can be such a danger, but who am I to judge).

Agatha stops taking care of Franklin for a while. Later, it’s revealed that she did that because Annihilus transported her to the Negative Zone. But, soon, the FF saves her.

Agatha and the Scarlet Witch

Here we see a turning point in Agatha’s life. She declares her new role will be teaching Wanda more about magic. You can see how relevant she is, as Wanda right now is most known for her mystical powers. And, as I said before, this is the beginning of Agatha’s most relevant relationship.

Agatha spends her days training Wanda, and she is quite happy with Scarlet Witch’s progress. After Giant-Size Avengers #4, Agatha says the training is over, Wanda is free to do as she pleases.

Honestly, I wish this had a bit more of Agatha Harkness, but it’s still great. For the first time, we see a story centered around her. During the “New Salem” arc, trying to find Agatha and Franklin, the FF finds New Salem, a city only for witches.

The people of New Salem isolated themselves, but Agatha believed that would doom them, and she left the city hoping she would inspire other people to experience the rest of the world and grow, but no one followed her. Her son, Nicholas Scratch, started hating her and manipulated everyone in the city.

It’s a good origin story and also a well-deserved one. At this point, Agatha was already appearing quite regularly, but the readers didn’t know almost anything about her.

After her rescue, Agatha starts taking care of Franklin again.

Salem’s Seven, a powerful team of evil witches, attempts to bring Nicholas Scratch back, but Agatha and Franklin work together and defeat them.

Nicholas Scratch comes back and manages to possess Franklin. At the end of the story, Agatha decides to stay in New Salem and help the citizens, including her son.

The Death of Agatha Harkness

Avengers: Vision & the Scarlet Witch – A Year in the Life

Salem’s Seven and the people of New Salem capture Agatha and burn her at the stake. Wanda and Vision end up in the city and find out what happened. The spirit of Agatha Harkness helps Wanda a few times in her battles.

Agatha resurrects herself and visits Wanda and Vision. She wants to understand what is happening with their children because when Wanda isn’t thinking about them, they disappear, meaning they probably aren’t real. After uncovering the mystery, Agatha erases Wanda’s memories making her forget she ever had children (I hope this never comes back to bite Agatha…).

I need to highlight that when Agatha says that being burned wouldn’t kill a real witch, Wonder Man agrees with her and mentions that the same thing happened in the Bewitched TV show. I can’t begin to explain how much that made me laugh.

As you can assume by its name, “Darker Than Scarlet” is focused on Wanda. With everything that happened to her recently, Wanda turns evil for the first time (wait to see what she does in Disassembled). Agatha is a major player in helping Wanda go back to the good side.

If you want to know more about the “Infinity War” event, take a look at Marvel’s Infinity Saga. Agatha works with Wanda and other mystical heroes and even forms a group called Strange Bedfellows. She also notes something darker in Franklin Richards and accepts Sue’s request to be his nanny again.

Darkhold: Pages From The Book Of Sins – The Complete Collection

Works a bit with Wanda and Doctor Strange.

The Agatha Harkness Cut: Darkhold: Pages From The Book Of Sins #4-7.

A good synopsis for this one would be “the 90s were weird”. But, regarding Agatha, she infuriates Sue and is kicked out of the FF headquarters.

Fantastic Four Epic Collection: Nobody Gets Out Alive

Wanda is having nightmares, so she asks Agatha to help her. Worth reading if you like seeing them together.

Nova (1994) hasn’t been collected, but Agatha appears in two issues (#6-7). It tells a bit about her past; I find it a bit interesting to read it, but you can skip it honestly.

Agatha helps Sue deal with Malice. It’s nice seeing them make up and be friends again.

Wanda confronts Agatha about her two sons; angered by the betrayal, Scarlet Witch kills her. (If you only started reading comics a bit after the 2000s and have never seen Agatha Harkness, now you know who to blame).

Agatha starts appearing in flashbacks and as a ghost accompanying Wanda. Sometime in the past, she killed Ebony, enabling her to see the future; with the future knowledge she obtained, now she tells the Avengers what Vision and his family are doing.

Please, if you like seeing Wanda and Agatha together, you need to read this. She is mostly comic relief, but in the last chapters, she is resurrected and tells Wanda their fates are intertwined, but she also needs some time for herself. As I said, it’s really nice seeing them together, easily one of the best parts of this run for sure.

Also shows up mostly for some laughs.

We learn a bit more about Agatha’s past and find out she was part of an organization called Daughters of Liberty.

She assists a little in the battle against Selene.

Agatha is giving classes about cloning spells. I really hope we can see more of her as a teacher, not just to Wanda, but also to a new generation.

In the past, Agatha created a device to help the Daughters of Liberty be a beacon of hope. But now Red Skull took it and changed it, making it able to harvest negative emotions.