If you wanted to point to a single hero that exemplifies the Atomic Age, you couldn’t do much better than Adam Strange.

Adam Strange was born on Earth with no super powers except his sense of adventure and his charm. Then one day, while working an archaeological dig, he is struck by a mysterious “”Zeta-Beam”” that instantly teleported him instantaneously to the far away planet of Rann. This formula of “”science man + teleportation mcguffin = savior of a foreign planet”” is a common trope of the age, and it puts Strange in good company with the likes of Burrough’s John Carter and television’s Flash Gordon. Or Hal Jordan, for that matter.

What sets Strange apart, however, is that he exists at the far reaches of the DC universe. The existence of not only aliens, but superpowered beings, really does add perspective to this earthman’s adventures. Especially of note are his interactions with various Green Lanterns, who follow a similar origin story… only they get super powers and the cleanly defined mission statement from Oa where as Strange just gets a jetpack and a willingness to make it up as he goes along.

Even that Zeta-Beam, his only way between Earth (his home) and Rann (the planet he’s destined to protect) is unpredictable. It’s a natural event like the weather, leaving Strange to chase it across days and wild geography just at a chance to get to where he’s needed, and hopefully to arrive in time… 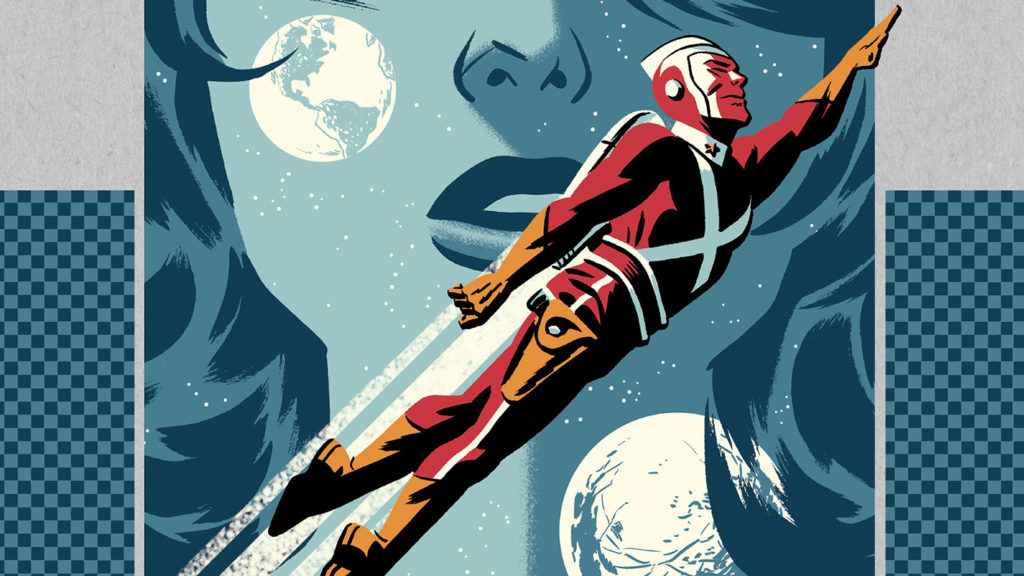 A fun, multi-versal tale that weaves multiple ages into one story.

DC simply couldn’t resist pairing Superman up with everybody. But there’s something a little special about how the Son of Krypton and The Man from Earth pair off. Not just in the whole “adopted world” thing, but in their sense of enormous duty. This comes up again and again, especially in The Nail (later in the reading order.)

The Greatest Team-Up Stories Ever Told

This book features some team-ups from later in the Silver Age, when Strange’s popularity was on the wane. They give a great sense of how Strange works best when he feels “older.” 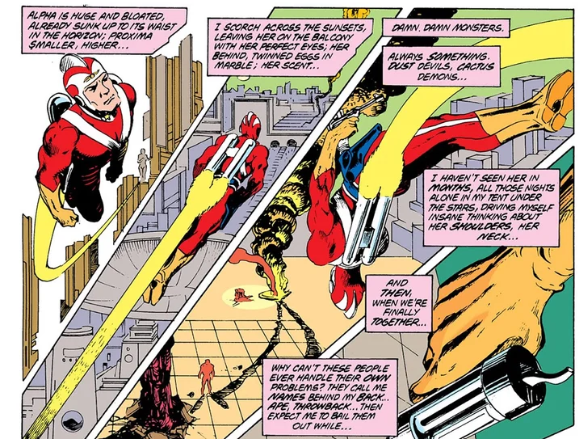 Alan Moore takes the same approach to Adam Strange as he did with Swamp Thing, digging into all the inconsistencies and peculiarities in Strange’s history and character, and weaving them into a deeper, more compelling story. if you don’t have the time or inclination to dig through the silver age history of the character, this is a fantastic starting point (and an amazing read in its own right.)

This all happens in Swamp Thing #57 to #58, which should really be taught right alongside “Anatomy Lesson.”

Adam Strange does a good job of representing DC’s worthwhile history in this event. But it’s still an event, so he only gets so much play…

Richard Buning and Andy Kubert team up on this limited series from the 90s. It’s a damn shame it’s out of print right now (if for no other reason than because it has the best comics masthead of its generation)

Justice League of America: The Nail

The Nail is Alan Davis’ fantastic story about a universe without Superman. Strange is used to show a small change in Kansas could have galactic consequences.

If Superman and Adam Strange are natural compliments, then James Robinson’s Starman is Strange’s best foil. Their powers and backstories are similar enough to tempt comparison, but their attitudes are so wildly different as to ensure conflict. Starman’s (then) hyper-modern attitude is so perfectly put off by Strange’s rigid, 1950s mannerisms. It’s a perfect pairing. 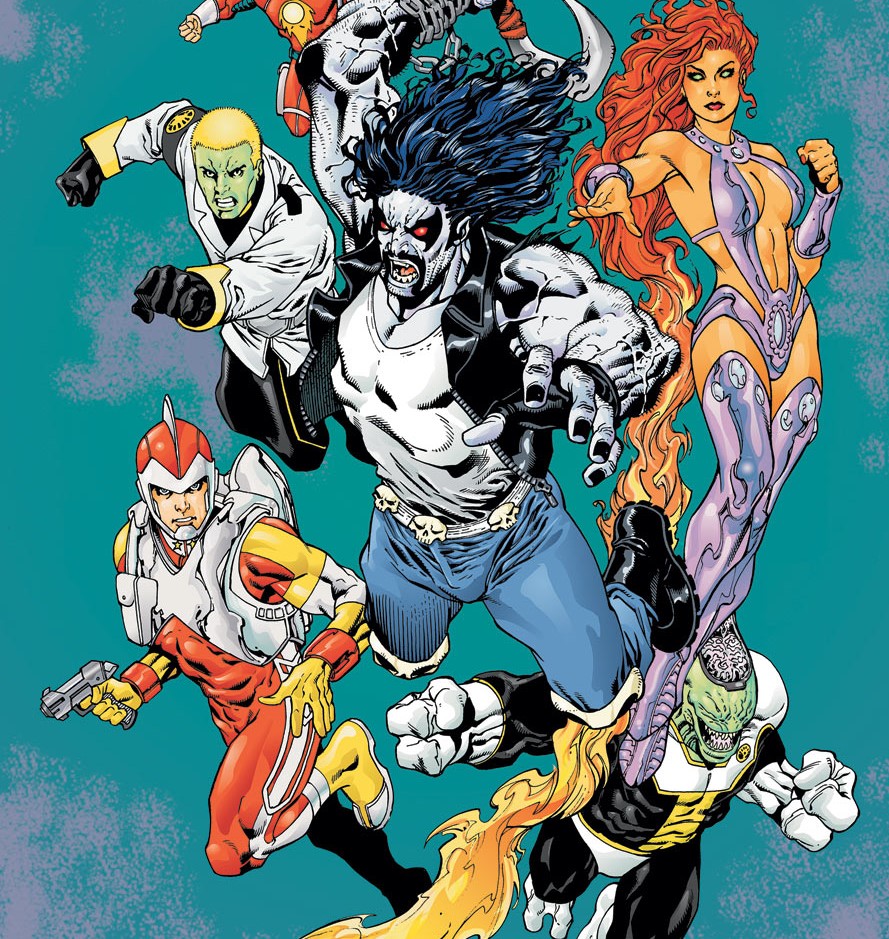 What had begun in Alan Moore’s Swamp Thing is picked up several decades later and turned into a whole big thing.

Rann has gone missing, and it looks like Thanagar might be to blame. It’s Hawkman vs. Adam Strange in a series that finally puts both characters to good use.

Ostensibly the second volley in the birdmen vs. spacemen war. In reality, it’s just a bridge between Planet Heist and Infinite Crisis.

Collects: Check out the reading order

Somewhere in the maelstrom of this event, Morrison managed to end the Rann-Thanagar war. Well, this part of the war, anyway. That this isn’t the main crux of the story tells you how much more is going on in Infinite Crisis…

DC misfits Adam Strange, Animal Man, and Starfire are stranded on an alien world before being rescued by The Main Man. It’s great, rollicking fun.

(52 was an attempt on the part of some of DC’s best writers to pull some under-serviced characters out into the spotlight and should be enjoyed as such.)

Writer Adam Beechen gets the 52 band back together. Only Lobo is replaced by a new character, Forerunner. But since this is an Adam Strange reading order, I won’t fill the next six paragraphs by running over my keyboard with a motorcycle until the words “bring back Lobo” appear.

Jim Starlin bookends his take on the man of two worlds. 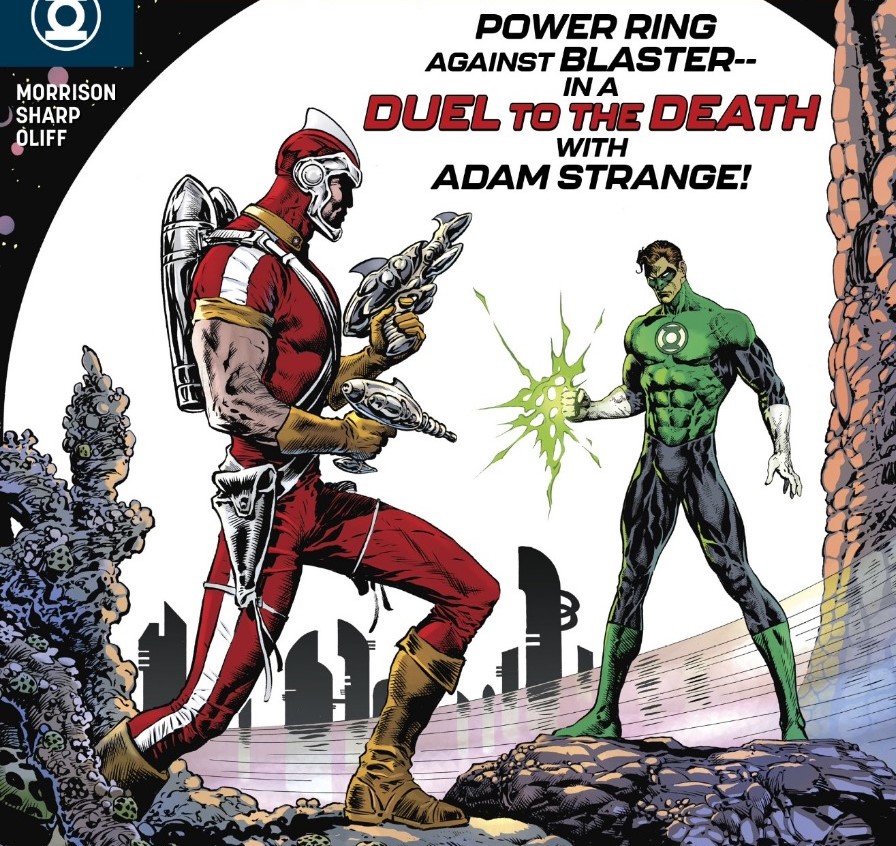 Adam Strange in the Modern Era

In one of the more confusing entries on the list, the Death of Hawkman is secretly an Adam Strange story!

Collects: The Green Lantern #1 to 6

Grant Morrison’s The Green Lantern is a love letter to all things Silver Age. It seems only fitting then that Adam Strange should make a commanding performance in issue #6.