This year marks the thirtieth anniversary of the FIRST X-Men crossover of the Nineties—the “X-
Tinction Agenda”! For me, this is the crossover event that serves as the template for future events, even
though the format for such shenanigans has always been toyed with.

was a bit closer, but brought in other Marvel titles (especially Thor, but also Power Pack and Daredevil) and barely involved the New Mutants.

was split in two separate stories; the culmination of Illyana Rasputin’s character arc beginning in Uncanny X-Men #166 and New Mutants, and Madelyne Pryor’s swan song in Uncanny and X-Factor.

My introduction to the X-Men was “X-Cutioner’s Song 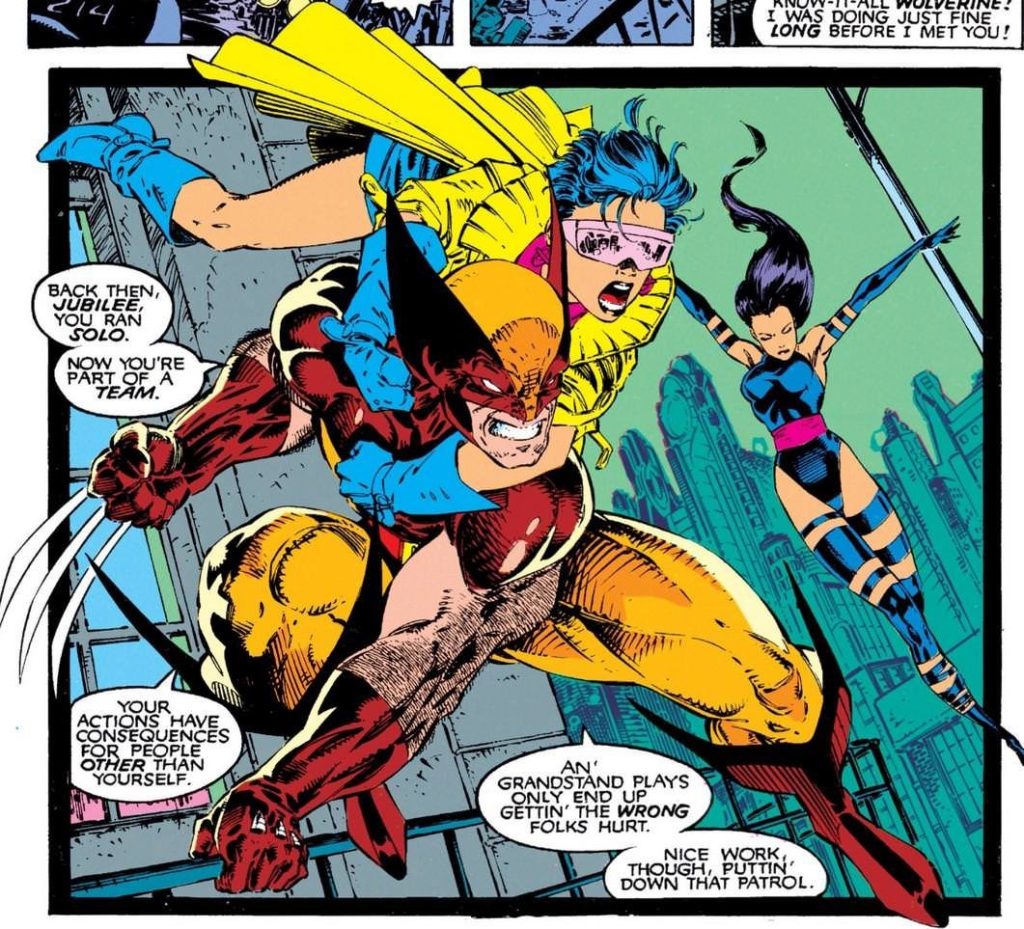 While it’s generally remembered fondly as an important X-Men story, critics of the crossover sometimes
cite the differences in quality across various issues; mostly artists Jon Bogdanove and Rob Liefeld simply not being Jim Lee, which is forgivable given Lee’s dominance at the time.

The groundwork for the crossover is set a couple years earlier, in Uncanny X-Men #235-238, which
introduces the island of Genosha. Genosha is the primary setting for “X-Tinction Agenda,” but becomes
even more important when, after being reborn as the de facto seat of mutantkind in the early 2000s, it is
blown to hell to the tune of several million mutant deaths in Grant Morrison’s New X-Men

. At the point
where Genosha is introduced, however, back in 1988, the X-Men are still in the Australian Outback
pretending they’re dead. Psylocke is still in her original body, Dazzler and Longshot are on the team, and
Jubilee is just a twinkle in Chris Claremont’s eye (she’ll be introduced about six months after this).

Genosha is an island, where the privileged human inhabitants enjoy an abundant quality of life on the
backs of literal, brainwashed mutant slave labor, reprogrammed for servitude by the Genegineer. The X-
Men are dragged into this when Madelyne Pryor, Cyclops’ now-estranged wife, is kidnapped during a
Genoshan mission to take back one of their own citizens who ran away from their apartheid-metaphor
lifestyle. The X-Men do manage to extract Madelyne and a couple key Genoshan citizens—the
Genegineer’s son and his mutate girlfriend–who stand against the regime, but that’s about all.

The next time we see Genosha is in part one of the crossover, Uncanny X-Men #270. In many ways, this is the beginning of the end of Chris Claremont’s historic X-Men run. The Outback Era had come to a close with many of the X-Men going through the Siege Perilous and being altered by it—most notably by their memories of their lives being erased. Dazzler was a movie star, Rogue found herself in the Savage Land, Psylocke woke up in the body of a Japanese ninja, Colossus was living as a painter named Nicholas and Havok…we’ll get to Havok.

Storm had been physically regressed to her early teens by a villain called Nanny. Cable, Gambit and Jubilee have been introduced. We are about a year from 1991’s X-Men #1, and Jim Lee is already drawing Uncanny; Rob Liefeld is already drawing the now Cable-led New Mutants, who are set to become X-Force; and X-Factor are just a few months away from sending baby Nathan Christopher into the future to become Cable (unbeknownst to characters, readers or even the creators at this point!).

As indicated elsewhere, the reading order for “X-Tinction Agenda” is:

The Genoshan Magistrates invite the X-Men into their business once again with a kidnapping, this
time of Storm and several of the New Mutants, helmed by Havok, the last of the X-Men altered by the
Siege Perilous, currently working as a Magistrate with no knowledge of his past life—he doesn’t even
recognize his brother, Cyclops, at first. The mastermind behind the whole affair is quickly revealed to be
Cameron Hodge, former X-Factor associate-turned-villain, whose last major interaction with the X-
Teams led to the death of Cypher in the New Mutants leg of “Fall of the Mutants.”

This time, he is directly responsible for the death of Warlock, one of many far-reaching impacts “X-Tinction Agenda” has on the X-Men franchise as a whole. By the time everything is said and done, Storm is returned to her adult form, but Wolfsbane has been permanently altered by the Genoshan mutate slave process. This not only keeps her in her wolfen form until 1993’s X-Factor #99 (returning to human form would also make her a mindless mutate again), but also genetically bonds her to Havok until that time, as the mutate process binds the Genoshan slaves irrevocably to the Magistrates in order to ensure their servitude. This is a direct setup for their membership in the new X-Factor team circa #71.

The parallels between Genosha and what’s being done in the modern line’s Dawn of X books
become more apparent in the years following “X-Tinction Agenda.” The death of the Genegineer and the
defeat of Cameron Hodge set the island nation on the path of making its mutant population
independent again and likewise, the humans no longer dependent on mutant slave labor. Similarly, the
drugs produced by Krakoa are leveraged by Charles Xavier in House of X

to ensure mutants, all now citizens of Krakoa by birthright, are no longer dependent on humanity. Indeed, the drugs, which cure
illnesses and add years to human lifespans, make Earth’s human population dependent on mutants. The
difference here is that the exchange is to the benefit of mutants, rather than humans. 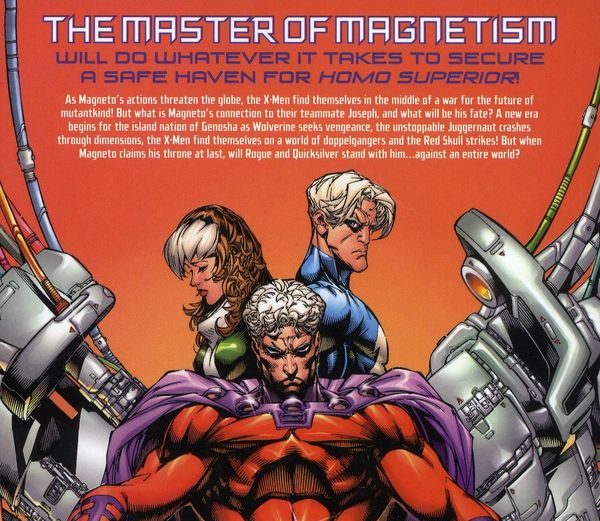 This is because Charles, along with Magneto and Moira MacTaggart, have positioned Krakoa as the
latest of several sovereign mutant nations that have existed throughout the history of the franchise. And
Genosha, as it happens, was the first, after the United Nations handed it over to Magneto at the end of
1999’s “Magneto War

” storyline. Of course, as illustrated in 2000’s “Eve of Destruction

” storyline, the last before Grant Morrison took over the adjectiveless title, Magneto chose to rule with an iron fist, killing ten thousand humans and attempting revenge against the X-Men.

The X-Men win the day, but Genosha is immediately front and center again when Charles’s killed-in-the-womb twin, Cassandra Nova, takes over a batch of Sentinels and ravages the island, setting the tone for the next twenty years of X-Men stories, in much the same way as Hickman appears to have done in 2019. Even Matthew Rosenberg, who wrote the last volume of Uncanny X-Men before the House of X/Powers of X launch, viewed his run as basically the closing notes of what Morrison began.

Krakoa has, just like Genosha, been at the forefront of a new era. This time for all mutants, not
simply those aligned with Magneto or with the X-Men (as was the case with the 2010s mutant nation, Utopia). One can only hope this new, mutant-focused society, already fraught with intrigue, has a brighter future ahead of it than its arguable predecessor.