is a DC Black Label book by writer/artist Daniel Warren Johnson, Mike Spicer, and Rus Wooton, and it’s a weird comic book. The premise is very straight forward: Princess Diana of Themyscira wakes up in a post-apocalyptic wasteland and has to uncover the mystery of what went wrong and protect the remains of humanity. On the surface, the hook isn’t really all that different from Scott Snyder and Greg Capullo’s Last Knight on Earth

, but what really set it apart was Daniel Warren Johnson spearheading this book.

and Extremity really make him an exciting artist; his work conveys an over the top momentum and action that is a really fresh presence on a big two book. And objectively, Wonder Woman: Dead Earth is a visually stunning book and plays so perfectly into Johnson’s strengths as an artist. The story and plot are where it gets a bit dicier. At its core Wonder Woman: Dead Earth, is a story around the notion of second chances told really effectively, but its problems come when the story is put within the context of DC Comics’ fascination with overly grim settings, and the broader mythology of Wonder Woman & her meta-textual themes and context in the real world.

First and foremost, the art in this book is incredible. As mentioned before, Japanese Shonen Manga is a clear influence for Daniel Warren Johnson and is incredibly evident in how he approaches action. There’s a specific way in which he conveys motion by blurring the outline a part of someone’s body into motion lines, which consistently makes whatever Johnson is drawing just a little bit cooler than it already was. On top of this, Johnson makes use of skewing proportions and perspective to really accentuate a number of actions to make them all the more dynamic. So much of the action feels like a single frame in an exciting anime. 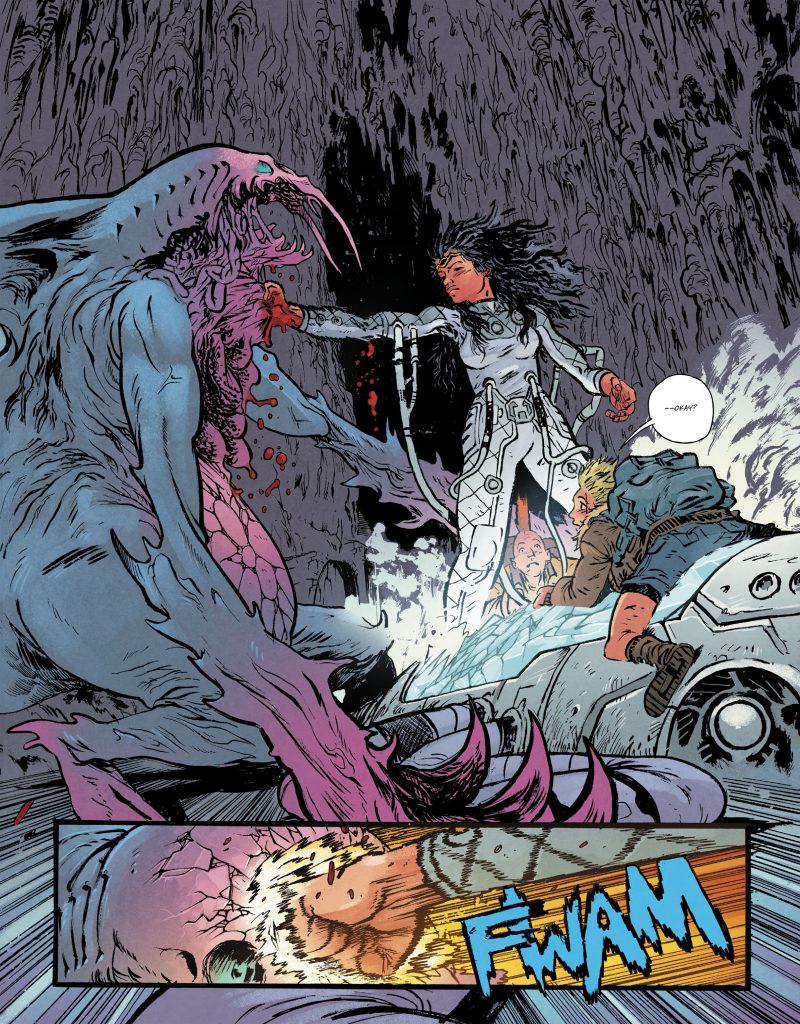 There’s also so much freedom that comes across in the page layouts and pacing of this format. The 50ish pages per issue really give Johnson space to build towards moments. Diana emerging from the pod, the Haedra attacking the settlement, and oh so many beautiful double-page spreads really soak up the atmosphere and impact of these events and it’s such a boon that these moments don’t have to be sacrificed for the 22 page constraint of ongoing comics. Johnson’s collaborators also bring the heat in this series. Mike Spicer’s colors seem so in tune with the tone Johnson is aiming for in every page, whether mimicking the browns and reds of the dirty post-apocalyptic setting or the supersaturated primary colors of the more intense action sequences. Spicer’s colors also add a lot of texture to Johnson’s already bold linework which again reinforces the look this book has going for it.

Rus Wooton also deserves kudos for how distinct and effective the lettering comes across in Wonder Woman: Dead Earth. On the word balloons alone Wooton leans into the grit of the story and mimics a handwritten quality that carries over to the action scenes. Some huge sound effects are similar to the bombastic superhero standard with some extra grit, but there are some effects that are a bit rougher and lean into Johnson’s intense momentum of his action scenes. Wooton’s lettering really bucks the notion of “really good lettering is lettering you don’t notice” because his work really adds to the entirely unique style this comic has. Dead Earth would really be missing something if the letters were confined to a more traditional style. Overall, Wonder Wonder: Dead Earth is an incredibly captivating comic to flip through and experience just how cool every page looks. If you strip all themes and context and just want to read “Post Apocalyptic Wonder Woman fighting Kaiju,” then stop reading this review and buy it right now 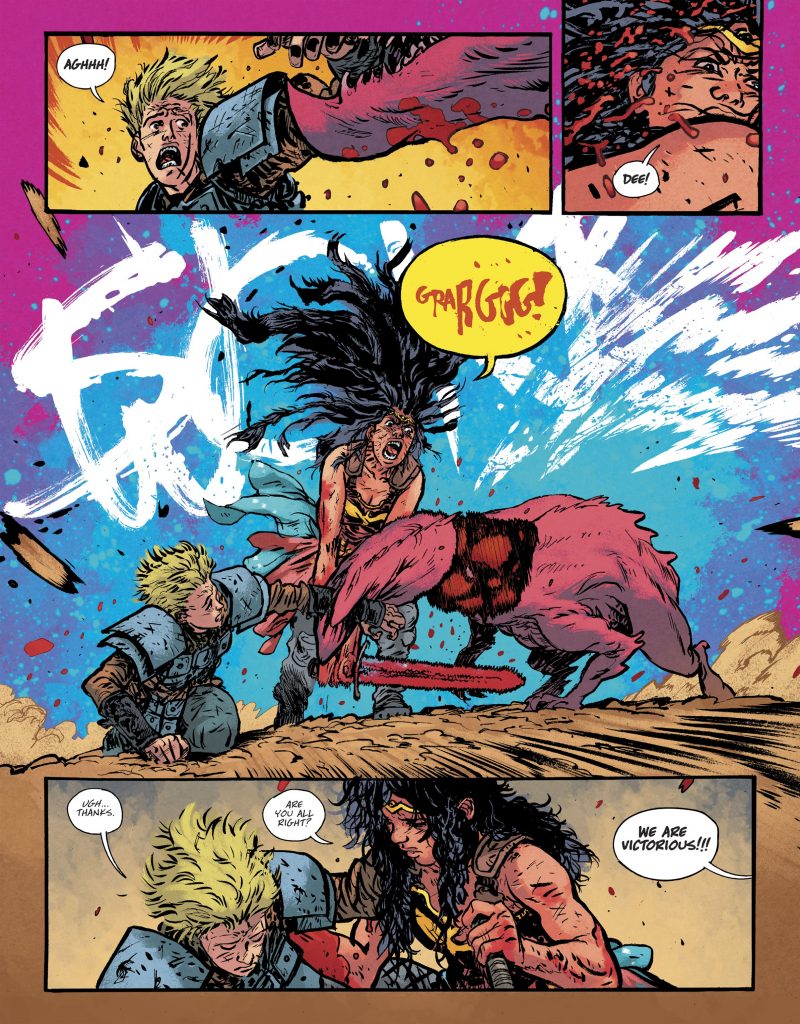 While Wonder Woman: Dead Earth works really well on the level of “cool $#&% happens” there’s a decent bit of depth to the story that helps and hurts at the same time. Be warned, there are spoilers ahead!

And let me tell you, there are some twists. The premise of Diana waking up in a post-apocalypse world and trying to help the remains of humanity carries the bulk of the first two issues but gets complicated with the reveal at the end of the second issue that the haedra creatures attacking the humans are mutated Amazons led by Diana’s mother, Hippolyta. Complicated right? Even more complicated, is the next chapter’s reveal that the “Great Fire” that nearly wiped out humanity wasn’t nukes, but instead was Diana herself, using her full power to beat Superman’s @$$ across the planet. See? Quite complicated.

These two big twists are both done to service the theme that carries the series: second chances. The core of Diana, at least as Johnson is writing her, is to be loving to a fault — as shown in her response to Dee after her and her friends betray her to the cruel ruler of that land. When they both end up locked up, Diana still maintains that she “loves” her and all of humanity. This is even echoed in Diana sparing that same cruel ruler after discovering he tortured Cheetah and forced her to fight in tournaments.

While there can be an argument made over how this radical love and forgiveness play in 2020, Johnson sets the theme in stone. This strong establishment works incredibly well with the breaking point in issue two where Diana comes to terms with humanity’s betrayal and the fate of her Amazonian sisters. It’s easier for her to shrug off Dee’s betrayal and Theyden’s experimentation on Cheetah (on her behalf) but something that’s so incredibly close to home and so massive forces her to ask the first question: “Does humanity deserve a second chance”? And while that on its own is a compelling exploration, Johnson one-ups this with the reveal of Diana’s direct involvement in the “Great Fire,” shifting the question from whether humanity deserves a second chance to whether Diana does. 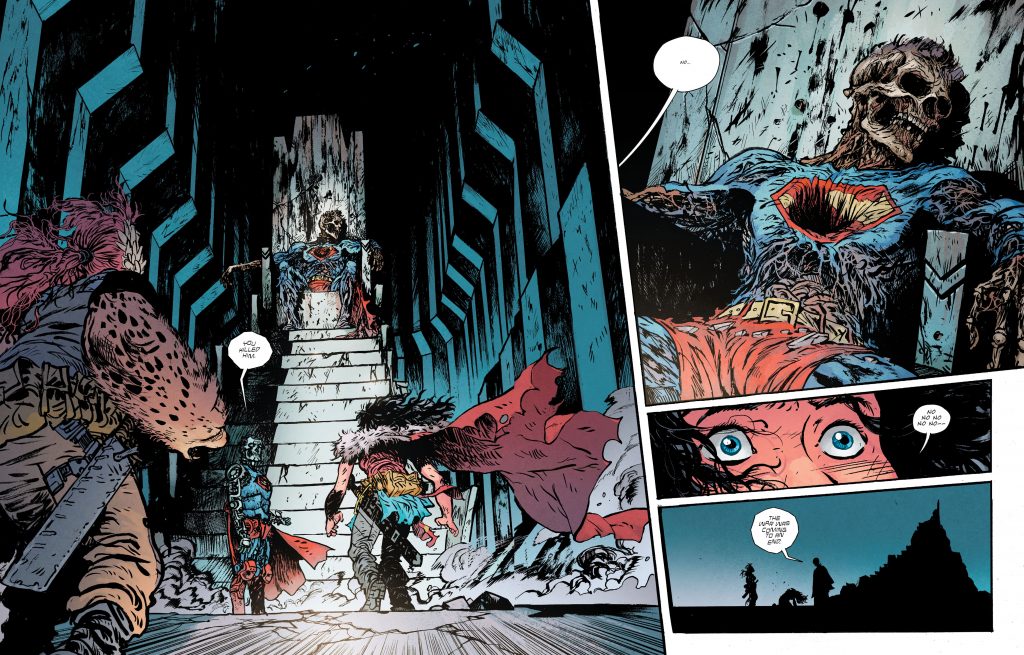 On their own, these themes work well in this book. The themes of forgiveness are woven throughout and aren’t always extremely cut and dry, but putting Diana at the center is an interesting and controversial choice. It’s easy to have superheroes forgive. It’s a trope that’s been so commonplace that it’s expected. Wonder Woman is the shining emblem of compassion in the medium, so it is fascinating to see these ideals put to the test towards humanity, the Amazons, and herself. However, there are a handful of shortcomings in these choices and a lot of them feel like sacrifices of Wonder Woman as a character and her lore. While I am far from a Wonder Woman historian, a number of Johnson’s liberties feel like they would work best in an original setting but bump against Wonder Woman lore in a way that may agitate longtime fans.

One example is Diana’s Bracers, which have the New 52 interpretation’s use of controlling Diana’s raw power, yet gesture towards their original symbolism of submission. Originally they were used as a reminder of the Amazon’s enslavement at the hands of the Greeks. Diana’s bracers are her submission from using her full power, and when she loses them she destroys the world. After righting her wrongs she seeks to wear them again in a sort of submission to earn back humanity’s trust. The metaphor feels unclear and it makes me think that the bracers were treated more like a “cool object” rather than an analogue. The bracers break and there’s no real analysis of the deeper meaning beyond “Oh Diana can go Super-Saiyan now.” This shallowness extends to how the Amazons are treated in this as well. They are still an island of all women, yet the deep symbolism of what that means feels under-explored in this series and in this world. Functionally they just feel like a fictional nation of superhumans who go to war with humans. They could have just as easily been Atlanteans or a group of Kryptonians living on Earth in the way that there isn’t really much depth given to the feminist connotations of their existence.

In fact, there are choices that feel off because they are so divorced from these frameworks. The transformation of a feminist paradise into an island of irradiated monsters hellbent on attacking the scraps of humanity does not play incredibly well. On top of this, Nubia, arguably the first Black superheroine and consistent contemporary of Diana, is presented as a burly caretaker and trainer of Diana which errs ever so close to the “mammy” trope for the only Black character with a speaking role in the series. The idea of the character whose role Nubia plays is interesting, the armor is cool, but again there doesn’t feel like there was a lot of thought on what these characters represent.

The DC Universe is teeming with dark and gritty alternate universes (oh God there are so many) and while Wonder Woman: Dead Earth feels distinct visually, it’s hard to set its contents apart from the rest. Johnson, Spicer, and Wooton create a comic that is full of exciting images and it fully works on that level, but it misses the mark when it invites us to think about it a bit more. The level of depth it brings in examining forgiveness works well with Diana as a character and superheroes as a concept. However as great as that thematic depth is, it misses on the broader realms that Wonder Woman and her mythos operate in feminist interpretations and these aspects of Themyscira come across as lore for lore’s sake despite carrying an incredible amount of weight. Wonder Woman: Dead Earth provides excitement, an exploration of empathy, and the potential to be great, but it lacks elements to distinguish it from the slog of the many “Dead Earths” of the DC Universe. 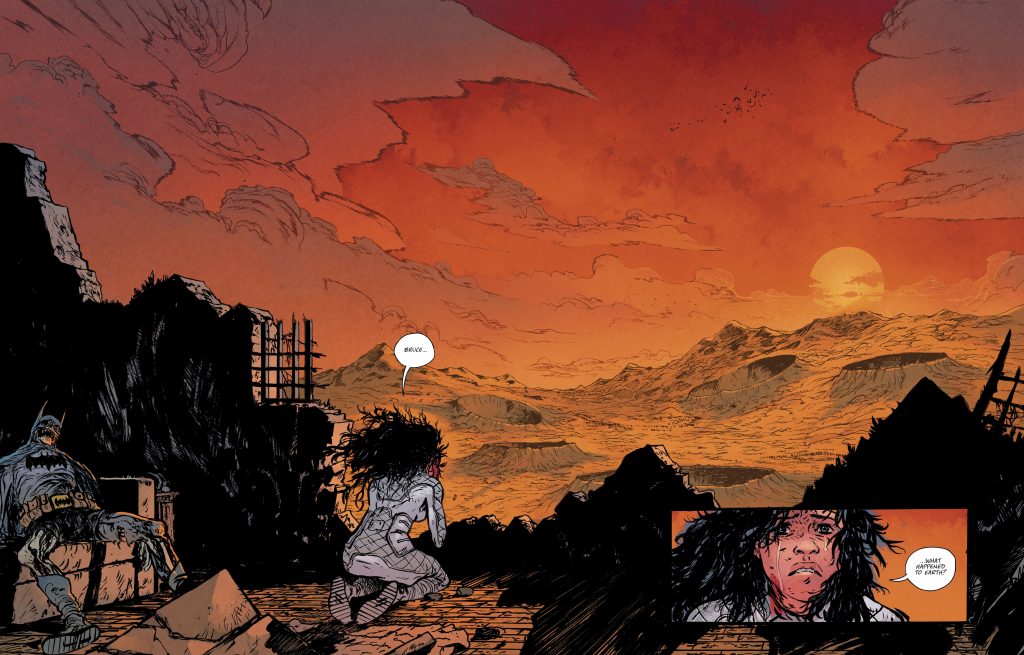