You are here: Home / Featured / Who Watched the Watchmen? Watchmen’s Legacy on… The Question #17, “A Dream of Rorschach”

I have a confession: When I was 16, I became a big fan of Ayn Rand. Listen, I know. Now I know! But at 16, my high school assigned The Fountainhead as reading (In retrospect, I could have chosen to read Maus instead, and how my comics fandom might have exploded earlier in life!), and I found the contents deeply meaningful.

Here was a high-minded philosophical tome prescribing a life dedicated to being your true earnest self, not catering to social conformity or the whims of the masses. At 16, my gods were anything teasing intellectualism against the grain, and so I fell for Pitchfork indie rock reviews, Donnie Darko, Kurt Vonnegut, and yes, Ayn Rand.

It wasn’t until college when I interned at a law office that I realized how deeply odd this was for a kid like me. A lawyer there (with copies of Stan Lee and Steve Ditko Doctor Strange on his desk no less!) asked me my favorite writers, and sensing a kindred spirit, I proudly listed Vonnegut, Joseph Heller, Dave Eggers, Vladimir Nabokov, and Ayn Rand. The way that lawyer’s face went from proud glee to horrified offense is etched in my memory, as is the way his voice shot up 34 octaves of incredulity shouting Ayn Rand!

I read (and largely hated) Atlas Shrugged that summer, and like I said, now I know.

Whereas I read The Fountainhead as a kind of teenage punk rock built around blazing your own trail, the Atlas Shrugged experience was clearly one of deep, uncomfortable selfishness. And in a grotesquely reduced way (I’ll save you the thousands of pages of Rand’s borderline unedited diatribes), that’s Rand’s main point: Take care of yourself, and only yourself, and the elite intellects and performers among us will thrive. Anyone else is just a roadblock in your way. 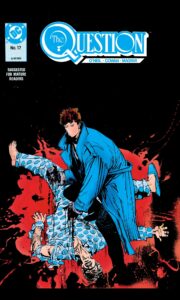 I tell that story mostly to illustrate how obviously cool I was as a teenager, but also because Steve Ditko, creator of The Question and Mr. A, key influences for Alan Moore and Dave Gibbons’ Rorschach, is a famous proponent of Ayn Rand’s objectivism. Ditko’s fixation is honestly kind of admirably integrated into vast swaths of his work, from the times he most actively plotted Marvel’s Spider-Man to Mr. A straight up shouting at readers about the black and white nature of good and evil.

Because Ditko’s philosophy is worn so openly, it’s the natural building block for future creators thinking about playing with his toys. That’s what you have in the mid-80’s, as Moore, Gibbons and Higgins constructed Watchmen. And you almost simultaneously have Denny O’Neil and Denys Cowan launching DC Comics’ first The Question

series since acquiring the rights to the characters of the Charlton Comics universe.

It’s a fascinating scenario in comics history, where you have two historically celebrated creative teams more or less figuring out how to modernize the same character in concert. Famously, in Moore and Gibbon’s case, the original plans for The Question morph into Rorschach, who so successfully blends Question and Mr. A’s moral certitude that the character’s been treated as the hero of Watchmen for nearly 4 decades. Rorschach doesn’t change anything Ditko espoused. In fact, Moore’s primary aim is to satirically lean so hard into Ditko’s objectivism that Rorschach quite literally melts into a puddle of uncompromising, unresolved trauma.

On the other hand, in O’Neil and Cowan’s The Question, efforts are made to rehabilitate Charles Victor Zsasz; aka Vic Sage; aka boy, was I confused how this run was referencing Batman serial killer Victor Zsasz before that character’s debut! Where Moore and Higgins deconstruct Ditko’s objectivist ideals to expose the selfish delusion at the core of the absolutist hero, O’Neil and Cowan literally kill then reconstruct The Question to their own liking. Both versions have to engage with the Randian legacy, but Moore’s is built to destroy, and O’Neil’s is built to live forever. 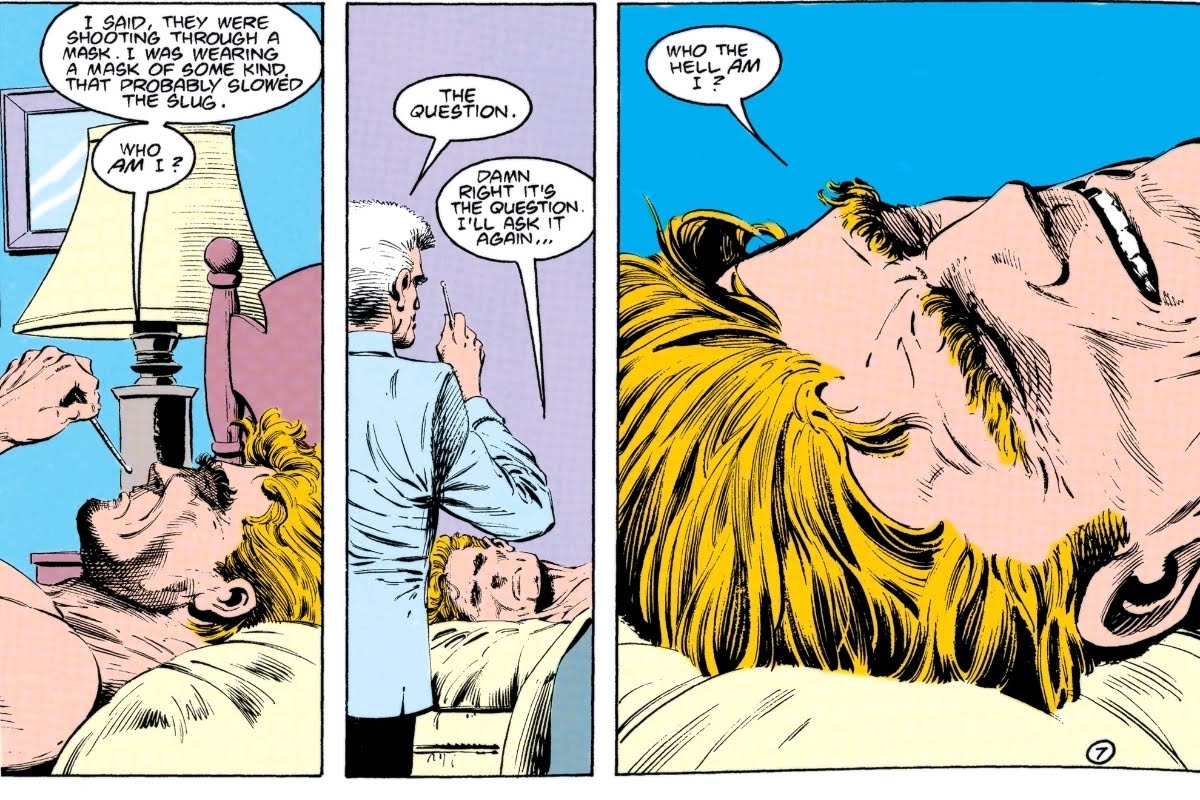 After Vic’s surprise murder at the end of The Question #1, O’Neil and Cowan are able to rebuild their own version from the ground up, concentrating most pointedly on the inner spirituality and conflicting violence of the character. If you invest a dollar every time someone says “Zen” either in The Question or in discussing this run, you’ll be rich someday, and also probably run out of dollars. (I have no idea how investing works!) Either way, the recalibration works and sets the stage for a ponderous, enigmatic, reflective Vic Sage that has shaped interpretations of the character in the DC Universe in both comics and the likes of Justice League Unlimited. Not to mention allows for the eventual legacy passing to Renee Montoya.

To O’Neil and Cowan’s benefit, the shadow of Rorschach doesn’t loom particularly large over their Question. At least until Watchmen concludes, and the first edition 1987 trade becomes available for everyone to consume the all-time great work in full. And it’s at that point The Question #17 engages with the character’s commonalities in “A Dream of Rorschach.” 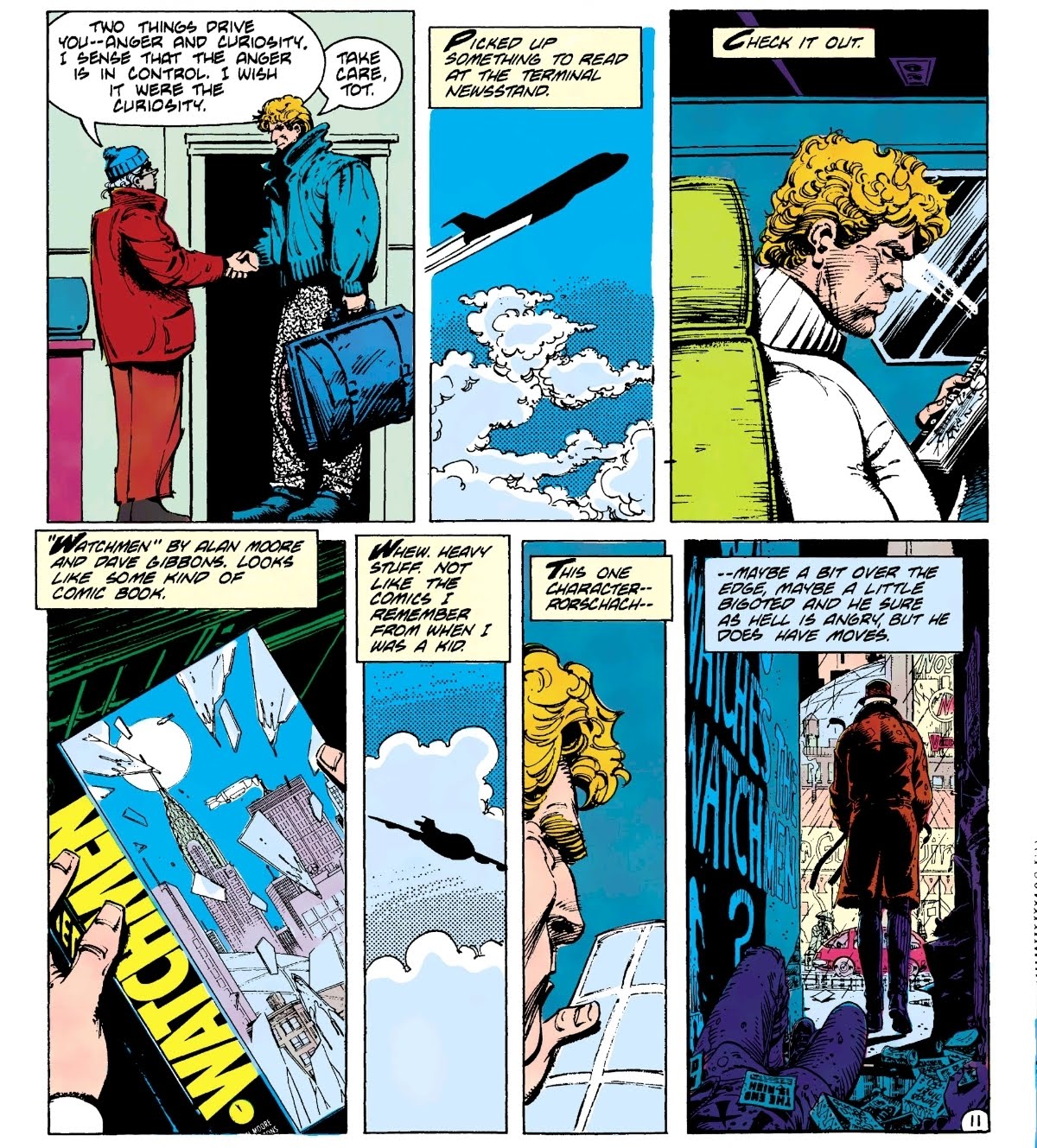 Do Questions Dream of Electric Rorschachs?

The Question #17 is quite famously the most direct early reaction to Watchmen set inside the DC Universe. And like much of the acclaimed run, it’s quite effective in places. As he struggles with his own approach to vigilantism, Vic Sage purchases the Watchmen trade for a flight, and naturally gravitates towards the character of Rorschach (much like young men the world over). Sage then spends the remainder of the issue mythologizing Walter Korvacs, asking himself WWRD, and striving for the action-hero cool of mister “You’re locked in here with me.”

The profoundly tongue in cheek mimicked and idolized Rorschach is delightfully ahead of the curve, with O’Neil whittling down perceptions of the gruff vigilante straight to the core:

“This one character – Rorschach – Maybe a bit over the edge, maybe a little bigoted and he sure as hell is angry, but he does have moves.”

There’s a popular critical insistence that readers of Watchmen celebrating Rorschach are missing the point, and while that’s true of Moore’s thinking, I appreciate that O’Neil rightfully observes this is still a tremendously compelling urban crime-fighter, appealing for all the same reasons Punisher, John Wick, and any number of uber-violent anti-heroes have for generations. If Alan Moore really wanted to make sure nobody would want to be like Rorschach, he shouldn’t have made him so damn cool!

Question’s actual dream of Rorschach does feel like a strange missed opportunity. The dream replays the conclusion of the previous issue, with Question morphing into Rorschach by dream’s end, nodding and winking at the character’s shared ancestry. But when you go back and read the scene they’re sharing, it’s about a disgustingly racist PI saving Vic’s life. (Warning: The racism is expressed through the most n-words I’ve ever read in a Marvel or DC comic by far. Even Kitty Pryde thinks it’s too much.) It would be far more compelling if Dream-Rorschach’s response to this situation was notably different than Question’s teary eyed confusion. The Question #17 doesn’t want to / or think to engage with the character’s different reactions to this open-faced racism, and it’s honestly stranger to leave unaddressed.

Regardless, O’Neil and Cowan’s most effective decision is to have everything go wrong for Question every time he tries to live up to the standards of his hero Rorschach. In this issue, Question falls out of a building on a man and kills him (this is before he reads Watchmen but still), loses literally every fight he gets in, drinks too much and pukes in a toilet, and is set for execution in the snow before a DC hero staple, Denny O’Neil’s own hard-travelin’ Green Arrow, shows up deus ex machina to save him! It’s a pitch perfect distillation of the differences between Rorschach and the rebooted Question, one a brutally violent loner who gets answers; the other a growing, changing cloud of uncertainty and adaptation.

I don’t know how deliberate it is either, but the decision for a very recognizable DC hero to keep the Question alive in the DCU – unlike the frosty fate Dr. Manhattan has in store for Moore and Gibbon’s version – feels acutely self-aware and appropriate. Indeed, it’s the main reason Moore couldn’t use the “real” Question in the first place, since his story would leave the character unusable, instead of available for the next issue’s adventure with Oliver Queen. 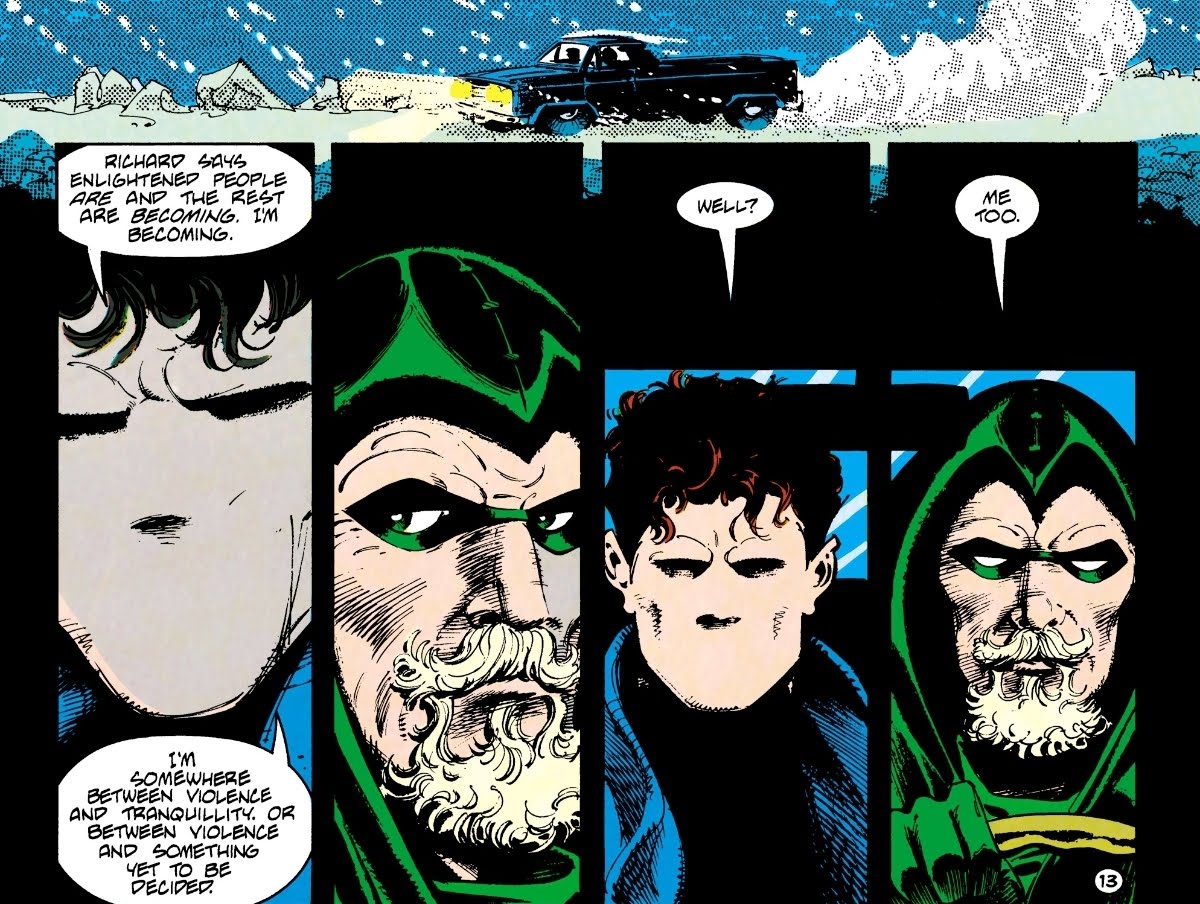 A Tale of Two Questions

This Question goes on to grow, to use violence less, to become so open-minded and curious he confuses the Riddler with his amorphous doubts. O’Neil and Cowan’s Vic Sage grows well beyond Rand’s objectivism, acknowledging the vast pools of gray in the world, and acquiring the self-awareness to understand he doesn’t have all the answers.

Rorschach, for all his action-hero posturing, for all his belief in a true superhero’s unwavering sense of right, never compromises right into the grave.

Even now, it’s not like I like The Question more than Watchmen, and that’s not a particularly worthwhile debate. I do stand in awe, though, how mere months after its conclusion, O’Neil and Cowan stared into the face of Rorschach, and understood so clearly what kind of appealing maniac he represented, and then built something better – if undeniably imperfect – with the exact same ingredients.

At 16, I’m certain I would have espoused the virtues of Walter Korvacs and The Fountainhead. At 33, I’m just glad I’ve since learned to ask the right questions regarding their rigidity.