You are here: Home / Reviews / DC Reviews / Who Watched The Watchmen?: Watchmen’s Legacy on… DC’s Legends 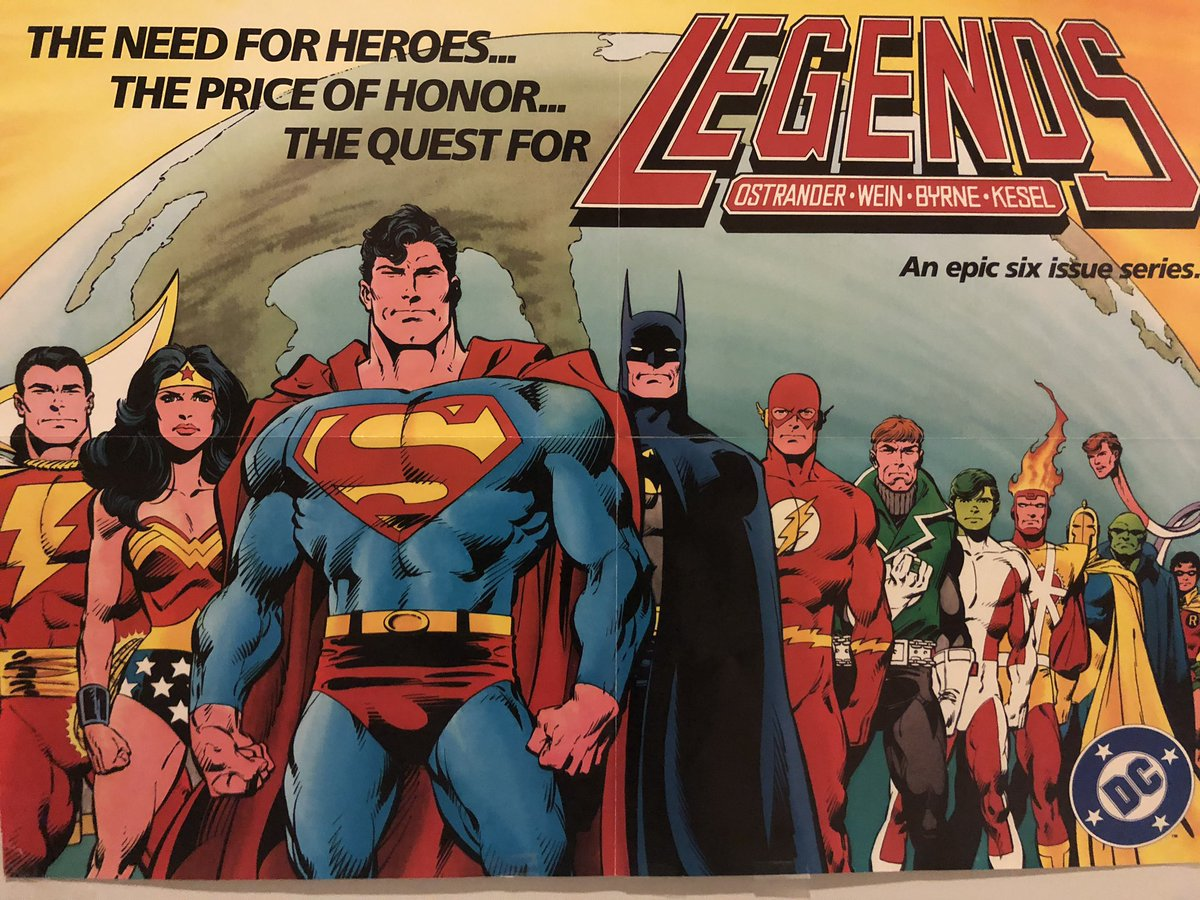 As the first major response text to Watchmen, Legends

is a tough book to find a starting point for discussion with, and an even more difficult one not to simply rant unabated on. The easiest may be the title as a statement of intent. In the immediate wake of Crisis on Infinite Earths, not only had endless ‘historical’ details profoundly shifted – the sprawling endless multiverse deleted, reams of stories cast aside, character-informing backgrounds rearranged – but the day-to-day status quos of the major players were palpably shifted. While Batman had a newfound spark of mythic import, Superman had shifted from a starlost godling forever seeking his place in a world not his own to a contented yuppie who was thrashed on the cover of his new #1; Flash and Green Lantern found replacements constantly framed in-text as being of dubious merit; Wonder Woman was a fledgling figure only making her debut to the larger world at the climax of this very miniseries; at the nominal center of the shared universe the Justice League of America was composed of charitably third and fourth-stringer heroes. In the midst of this iconic void, the likes of the Teen Titans, Blue Beetle, and Captain Marvel could now be positioned as tent poles. Following this collective deliberate scaling-down, building the first post-Crisis ‘event’ entirely around reasserting the primacy of these characters and the superhero concept was a reasonable, even inspired mission statement.

Legends is a title with an entirely different charge, however, when said superhero concept had just been turned on its ear. Crisis On Infinite Earths, first and foremost a paradoxical celebration and condemnation of DC’s history from a fan-minded continuity standpoint, had begun formal development in 1982; Frank Miller had only recently taken over writing duties on Daredevil and Alan Moore had yet to make his stateside debut in Swamp Thing. By the time Legends rolled off the presses in 1986, The Dark Knight Returns and, to a lesser extent, Whatever Happened To The Man of Tomorrow? had given definitive capstones to the companies’ two biggest characters, and Watchmen was in the midst of completely rewriting the rules of the game. Legends found itself in the position of defending a traditional interpretation of an idea at the exact moment in the industry’s history when said idea was most comprehensively and popularly uprooted.

Its approach to doing so is, again, right there in the name: ‘Watchmen’ is associated with a phrase evoking skepticism and accountability. ‘Legends’ are distant, misty, ahistorical. Unimpeachable. 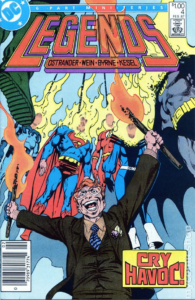 Legends as a superhero action story in isolation – centered on Darkseid using a disguised Glorious Godfrey to turn humanity against superheroes via a moral panic to soften the Earth up for conquest – is mediocre and scattershot in the same basic ways as many others of its kind. The writing is journeyman filler appropriate to its time, loaded with digressions setting up tie-ins or padding for the pagecount, and the art, while lovely, comes across now as an exemplar of 80s DC house style rather than anything enduringly vital or distinct. The inciting incident is the lord of cosmic fascism being nakedly led by the nose by a flunky and his ultimate endgame is nonsensical, half the thing is exposition about its own previous issues, its idea of a metaphor is a fire monster named Brimstone running around shouting about how superheroes are false gods, and Wonder Woman’s redefined DCU debut for the next 19 years is punctuated with her declaration that “I am nobody’s ‘babe’!”

Contextually however, its defining trait is its defensiveness. There’s the obvious post-Watchmen bits even besides the outlawing of superheroes, with Godfrey proclaiming them “outmoded, maladjusted loners, outlaws working outside the system”, and that “Today’s high-powered world is too sophisticated, too complicated, simply too dangerous for such an outdated notion as the heroic ideal! It’s time we put all such childish notions behind us!” The book even ends with a quote! (Ephesians 6:12) But just as much so it’s, of all things, a decades-late strike back against Fredrick Wertham and Seduction of the Innocent, with another of Godfrey’s arguments being “These costumed mystery-men provide negative role models for our children…they emphasize violence as a solution to the world’s problems”, with public burnings of superhero memorabilia. To implicitly frame a text centered around the superhero as insufficiently in step with a conservative moral authority and one viewing them as an authoritarian nightmare if treated with any meaningful verisimilitude, as functionally equivalent – and equivalently cruel and misleading to the point of being a literal supervillain plot – is a conclusion hard to imagine coming about from any perspective but that all critiques of the superhero are fundamentally abhorrent.

(Or, one supposes, they could be seen as equivalent in their seemingly irreconcilable perspectives both leading to ‘superheroes are perverts’, but that’s not a prospect that seems to come up one way or the other here.) 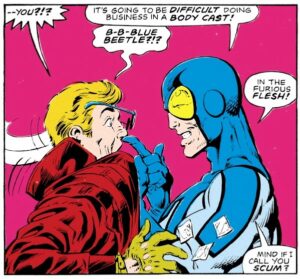 It’s a seeming refusal to engage with the superhero on any political terms that fits with the book’s thesis that superheroes are rightfully the domain of children. Indeed, one of the fairly clever bits in the book is a struggle for the soul of Captain Marvel, a child-turned-hero tricked into believing he had killed a supervillain while transforming between states – in other words, that his actions had realistic consequences. Any view of heroes as potentially fallible or exerting a poor social influence is wrapped up in a contemptuous adult cynicism. It’s a perspective that could, in principle, be the starting point of a cogent argument for superheroes as an either fundamentally juvenile genre, or one best-tuned to speaking to emotionally raw, ‘childish’ inner concerns. An odd starting point for the book that introduces the Suicide Squad, but every event comic writer has their mandates. But when the story actively presents them in a political context? It’s an outlook less believably chalked up to childish innocence.

On the surface, it’s in line with a streak of conservatism evidenced throughout the book. Guy Gardner and Blue Beetle brutalize or threaten to brutalize their enemies. The moment the super-cops are pulled back crime erupts throughout the nation, with random street punks cackling as they make a little old woman beg for her life (worth taking a moment to reflect on the outrageousness of a Republican administration undermining national defense in response to mere public outcry). And a bit regarding a brash young Black police officer, his wise older White partner trying to reign him in, and their brief, disastrous involvement in a super-brawl resulting in the one time humanity’s cheerleader Phantom Stranger condemns some as inevitably wretched has to be read to be believed.

But to characterize the story as a true-blue, stars-and-stripes-forever Republican tract doesn’t quite line up. The police and armed forces, the bastions of law & order at the core of the convervative self-image of American morality, are fallible if not outright untrustworthy. Godfrey’s populist crusade is as rooted in a right-leaning moral panic as any caricature of a leftist tirade against exceptionalism, with G. Gordon breathlessly exhorting against any recognition of civil rights for criminals as “invok(ing) rights they disregard!” Even 1980s Superman’s beloved President Reagan is displayed as weak for giving in to the mood of the moment rather than holding firm. And it’s Reagan’s inclusion that’s in fact the tip-off to the source text, moreso even than Watchmen, that this is truly drawing from. 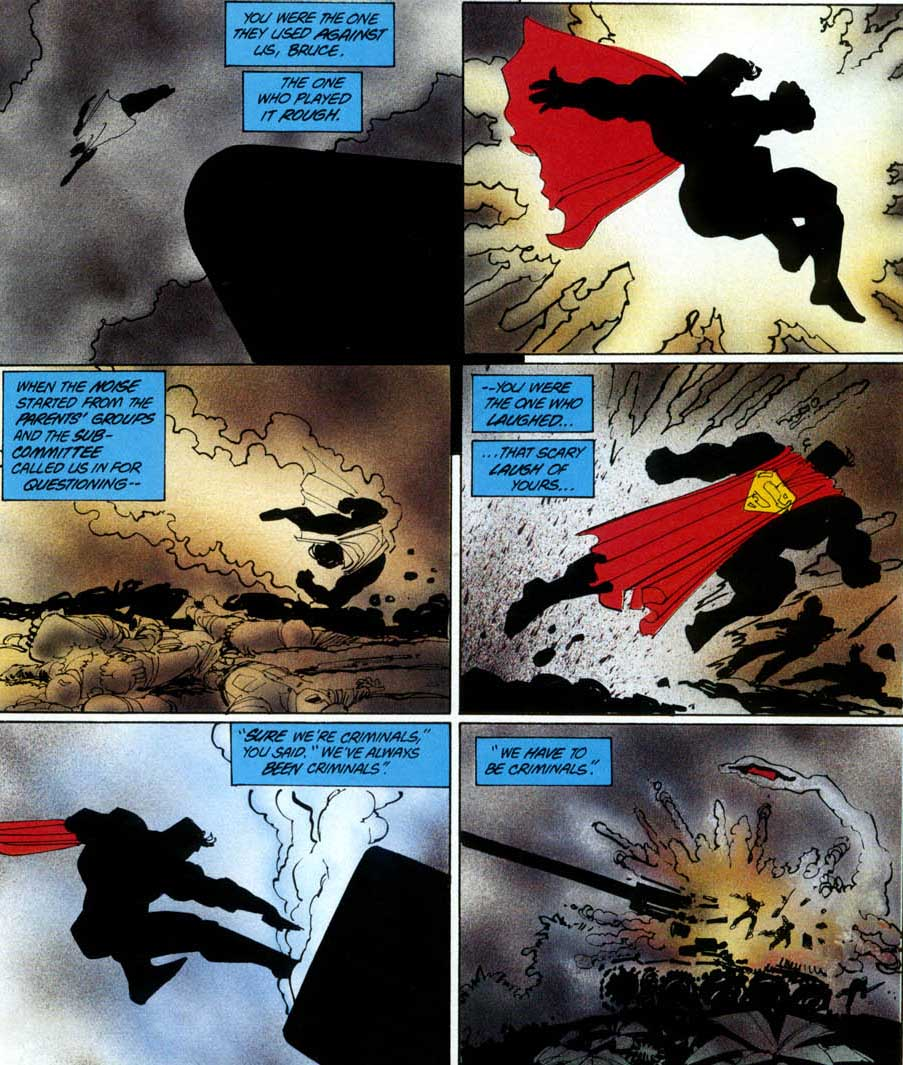 Batman: A Death In The Family and Batman: The Cult have been noted over the years as acting as unofficial ‘lead-ins’ to The Dark Knight Returns by enacting plot points hinted at in its background, but Legends might be the most pointed example of all with national riots against superheroes, Superman as the only one to adhere to Reagan’s demands, and an issue-ending fakeout suggesting the death of Jason Todd. The difference is that here, rather than allowing that future to come to pass, the heroes stick to their guns and avert the grumpy old Batman apocalypse by proving their magnificence and that any claims to the contrary are the product of dark designs. And with that as a primary influence, the ability of the book to consider heroes above reproach while condemning ‘real-life heroes’ makes far more sense. Legends questions the tension between mankind’s ingrained need for icons to look up to while not tolerating weakness or failure in them, and delivers its answer with all the wisdom of Solomon. 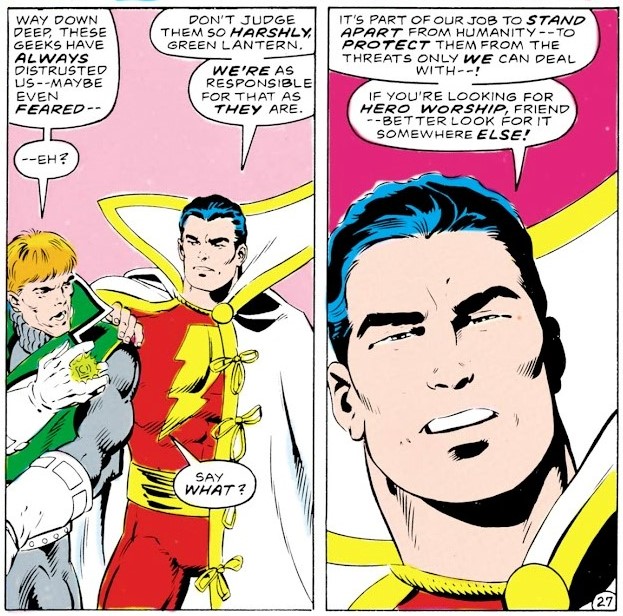 They’re simply not like us. They’re above us. Above our judgements, above anything our jealousies can aspire to. What weight do any of their petty failings have in the face of that? Or put another way: 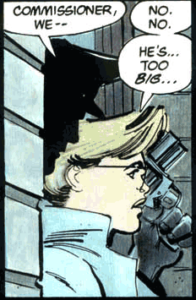 Legends isn’t much of a response to Watchmen – that was never going to be possible when that book wasn’t even finished yet. Insomuch as it is one, its countargument falls somewhere between an objectivist clamor for the besieged rights of the mighty and “well don’t be so snooty, this is still kids stuff after all.” But it’s the first step in a long, long road, and its legacy in that regard is substantial: as an uncritical tribute to the old guard of superhero archetypes, through a story imposing ‘realism’ on their world via a public outcry for their banishment that’s in fact a nefarious supervillain plot, culminating in our champions sidestepping the politics of the day to triumphantly rise above as something better and purer than our petty mortal grievances? It’s the direct precursor to what would one day become DC Comics’ ultimate attempted response to Watchmen in Doomsday Clock.