.
You are here: Home / Featured / Who Watched the Watchmen? ‘From Hell’ Review!

is, in all honesty, one of his only works I can reread. Most of his works have such a skewed and odd response to violence against women, it’s interesting that the one work that is explicitly and almost only about that very thing is the one that I’m able to revisit. Amidst his books about Lovecraftian frogs raping women in bathrooms, ancient dieties who raped the universe into existence and Watchmen’s quiet love story that expresses itself most fully in a child by rape, the book about a serial killer who butchers women… it seems almost quaint in comparison to the Invisible Man’s sexual escapades in a children’s boarding school.

The book begins with white and black stark lines clashing – Eddie Campbell’s art appears to me like a mountain coming into view only at the last moment – you see the rocks, and then you see the boulder, each bit unfolding like origami in reverse, and then you see the cliff it’s on is on a row of them, like noticing the bottom of a snowman before seeing the whole, like seeing the forest for the trees, the work unveils itself, starting with what it really, simply is, harsh scratches of black on white… forming a world.

This seductive art style has been changed and updated for various editions but the one that pulls you in like Alice with gravity is the original. It’s harsher, reads more like a newsprint that came alive. I can’t imagine “I’ve done it, Nedley, I’ve birthed the twenty-first century” reading any better in the harsh tones of a gravestone than with the four-color dimensions of a typical comic book. It’s supposed to look older, it’s supposed to be older – cave wall paintings made of ichor and chalk.

Alan Moore has an affinity for magic. He has a book on it, he’s a practicing one, seems to be waging war against the only other prolific and outspoken magic comic book writer; he’s an old-timey wizard with a big beard and he scares all the children on Halloween when he reveals his ghastly pallor and foreboding monotone voice. Given the description of him fits the nightmare reading tales of horror in some knock-off EC Comics book, it fits that his works often deal with the divine and the mysterious.

is almost a meditation on the work, following the heroine as she travels the Sephiroth to God-hood. If that’s a spell being born, From Hell shows the bloody work of the opposite – a curse being bound to the skin of the world.

People don’t think curses exist. People don’t think changing the world is as easy as it is. It’s so much easier to leave a scar than anything else. Satanic symbols of corruption flash like neon signs beside every highway, begging adulation and worship to their corporate gods, but we’re all too blind to notice we’re going to church every time we go to Chili’s. Every defense of Disney as a corporate God, blind to its followers, but ever loving, every time something like the Don’t Say Gay bill pops up, is Church and Worship. Every time someone fellates the Big Two, or wears their shirt, or has a gun with a Skull branded on it as they kill some motherfucker dead in the street… What do you people think God-worship is?

Comic books breed it more than most media. Alan Moore knows this. Fellow magician and enemy occultist Grant Morrison wrote a book about it

. It’s no wonder Moore is so interested in magic when he changed the cultural landscape like dropping a psychic octopus bomb into the brains of its readers, dropping a load of psychic negative resonance that has poisoned and spoiled comics for near 32.5-years, such that Geoff Johns is still trying to achieve priapism with the corpse of Alan Moore’s golden blue God, pouring fresh seed into the DC Universe only by chopping and screwing and Frankensteining the good work Moore did way back when.

Even now, the Great Darkness, his pseudo villain and commentary on the discussion around good and evil, is revived as the Ultimate Enemy. Nothing is allowed to stay dead. Stories aren’t allowed to matter, but even with the tide fighting against it, more people will remember Swamp Thing reaching out to touch a fingernail of the most unholy deity than will ever remember the Justice League disappearing.

So magical change. It’s possible, probable, and blood is the easiest way to go about it. Hurting people scars the world, it creates cracks in the foundation of reality that burst and cut and hurt others, creating a spider web of damage.

The word Columbine. Aurora. The name of Elliot Rodgers is fellated like some Sumerian Prince God worshiped by blinded and deafened children raised to believe his sweat is the sun’s water and his skin is all there is in the desert that’s soft. There’s a beauty around the idea that humans can gravitate towards the worst in people and prop it up to the point of ideation and godhood only in the fact that we could do that to other things, other people – grow heroes as well as villains; but the sad truth is there’s always been serial killers and superheroes…

But the world can be changed with a knife, which is the premise of From Hell.

Blood can be built into a world that is a cage that locks everyone in with ideas and notions about how things work. Women who fuck others for money, regardless of why, are hunted. Stabbed. Dismembered. Aren’t even in existence. Are the dirt under the boot of history. Are the phlegm wiped off with a tissue and discarded. Cut them apart and pose them like pretty pictures.

From Hell is a horror show about what the world of the twenty-first century is, as given birth by Jack the Ripper, the Whitechapel Murderer, From Hell.

And the sad part is so much of it is true. The idea of the serial killer has taken root and grown, it’s one of the most well-fed ideas we have, aside from perhaps nuclear war or the lack of any hope for the future, even in a bleakly funny way. It’s grown from the idea of a man in back alleys, to the idea of a slasher outside the woods, men with chainsaws, women without faces and guns, humans scattered through the night sating their lust for blood because we all have it deep down. The notion that the gunslinger, the hero, is just a serial killer in another story, that the monster at the end of the book is you, and deep down you know it, isn’t a common thought in just From Hell. Most of The Killing Joke revolves around that idea. That inside, we’re all as sick and twisted as someone who would cut the skin off a woman and wear it as a face. That inside, we’re all just one bad day away from the worst of things.

Of course this story has been edited, adapted, and torn to shreds like a beautiful butterfly dissected into pieces so small they can’t even be seen anymore. But Moore’s work deals with the idea that horror is inside of us all, waiting to be born, like a bird in a cage… and, as in From Hell, he often refutes it.

The world that he wants isn’t born. The twenty-first century does turn blood-crazed and analytical, does remove itself from the more nobler and beautiful pursuits, but before achieving godhood, a man who slaughtered women to make a spell to burn the twenty-first century an image of his own face, branded onto its eyes, he sees… he did not succeed*. One of his victims survived, like a cockroach she scurried off and lived. She alone is a refutation to his hypothesis, to the idea of a cruel and hopeless world, and dying for nothing, and living for less, to the idea of the hypothetical man raping the universe into being, to the man who holds down a spectre and rapes a child into her, to the idea that this… is the best of everyone, the best of everything.

She stands there and refutes him, with her children and her life, and instead of a God, he fades and goes back from whence he came.

*Editor’s Note: This is debatable, though more in an ideological sense rather than a textual one. One could argue the survival of Mary Kelly is a byproduct of the nature of his magic. Spells often work against intent. An age birthed from the murder of five women with the intent of seizing the cradle of history in the name of patriarchy was also an age where feminism began to rise. Magic has consequence and it often comes true in a ghastly way. 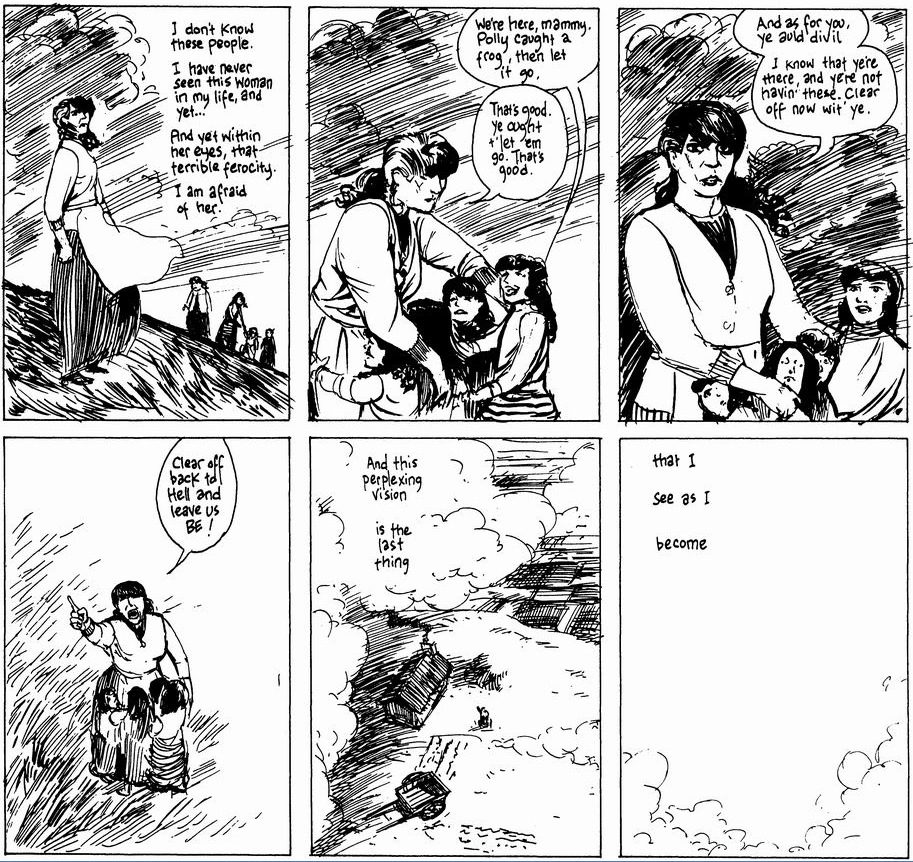 From Hell is Alan Moore’s work distilled to a perfect synthesis – a man attempts to destroy, using the bodies of women as his canvas, and despite winning thirty-five minutes ago… is refuted and denied and falls apart.

Alan Moore’s work often seems hopeless. It’s not. It’s wrapped in despair and agony and pain… but there is hope. Even in a story about the real-life Whitechapel Murderer – the idea that he does not get to be the one to define the world; that his victims are not mindless or faceless, but true, and it is their lives, and the lives of those like them, and the lives of those who loved them, that define what the world is. He can try and weave a spell to hold the world in his sway, but my dude, there’s like so goddamn many people. And it’s so easy to fuck up a serial killer spell, like, really, you tried very hard, it’s fine.

The story of Jack the Ripper as told by Moore and Campbell is the story of an old world birthing the new, and how hate and rage and pain are burrowed in like a tick beneath the skin, there is still life, there is still love, and hope, and all of that can scream the darkness down.