You are here: Home / Featured / Who Watched the Watchmen? Before Watchmen: Comedian Review!

Comedian is an odd character in the legacy of Watchmen. He doesn’t have the righteous, badassery of Rorschach or the intriguing indifference or memeability of Dr Manhattan; he’s just a really shitty dude. And unlike Rorschach, he doesn’t have the sense of honour that lets you ignore the really shitty parts so you can just enjoy the core you wish was there. It’s very easy to forget that Rorschach is a rape apologist; it’s impossible to forget that the Comedian is a rapist.

He’s also the only core character who doesn’t get a detailed backstory. Rorschach and Laurie Juspeczyk and Nite-Owl get big, juicy sequences about who they are and why they do what they do but the Comedian just shows up one day, fully formed like unto Athena (This is a very clever reference because Athena, much like Watchmen itself, features owls). So the prospect of a Watchmen prequel focusing on the Comedian, unlike most of the other Before Watchmen offerings, at least has the intriguing prospect of answering the question: what is this guy’s deal???

So of course this book doesn’t do that. In fact, this story isn’t even BEFORE Watchmen, it’s DURING Watchmen. It’s just some stuff that Eddie was doing between panels that we didn’t happen to see (the exact same thing happens with Before Watchmen: Rorschach so I didn’t know if this is a problem with Azzerello’s contribution or the project as a whole). This is a six-part series all about the Comedian that offers us exactly one (1) new piece of information about ol’ Eddie Blake: he f***in’ *loves* JFK!

The book opens with Eddie playing football with John and Bobby Kennedy (and their other brother whose name I do not know and also do not care to learn) and just generally pallin’ around and havin’ a swell ol’ time. Just a bunch of mates havin’ a real time together. And then Jackie Kennedy tells the Comedian to kill Marilyn Monroe. Which he does, but not before sleeping with her first because the Comedian is such a manly man who is constantly sleeping with hot babes.

The rest of the first issue is taken up with Eddie going on an FBI raid of Moloch the Magnificent (Ah Jesus Christ, I just realized it’s definitely a drug raid as a reference to Rorschach doing a “drug raid” on him in Watchmen. F*** all of these prequel books). The raid ends with Eddie finding out from Moloch that JFK has just been assassinated and the whole raid was a way to keep Eddie out of Dallas so that the FBI could assassinate JFK. What’s important about this is that Moloch is openly weeping at JFK’s death. Eddie is so distraught he immediately starts getting drunk (Obviously he’s too much of a manly man to openly cry which is a bit odd seeing as we have already seen him uncontrollably sobbing in Watchmen proper).

I’m gonna be honest and just lay this straight out there: I genuinely have no idea what JFK actually did that was so important. American media acts like he’s up there with George “Fought the British” Washington and Abraham “Abolished Slavery” Lincoln, and yet I don’t have the first clue why JFK is considered to be such a Great Man of History. Seriously, I don’t have the first idea what a single policy he had was other than “we gotta beat the Russians to the moon.” Thirty five years of consuming American media and, as far as I can tell, the only reason Kennedy matters is, to quote the only art ever made in Australia, “It’s the vibe and, ah, no that’s it. It’s the vibe.” And yet here is Moloch weeping like he’s Doctor goddamn Doom on 9/11. 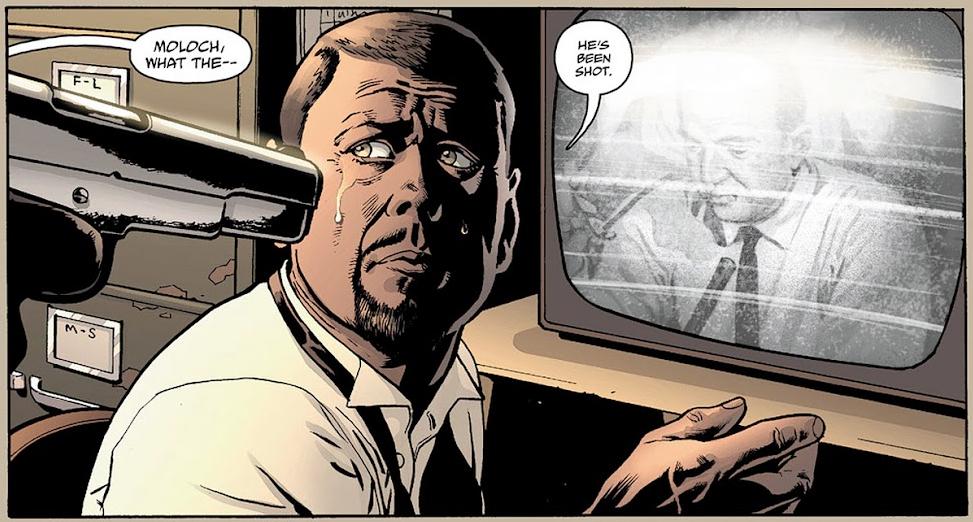 Look, I’m not American and as such I don’t understand the truly deranged relationship America has with its presidents. As a non-American, I find the idea of a villain weeping at a president’s death ludicrous. In Australia, I would say it is pointedly unpatriotic to feel strongly about the prime minister. The only prime minister with any sort of lasting popularity is the one who could scull a beer well into his final years (He did many other things of course: granted asylum to Chinese students when Tienanmen happened, floated the dollar, and was an early proponent of economic sanctions against South Africa. But really, it’s the beer thing that matters because this country has a deeply broken relationship with alcohol).

The point I’m getting at here is that this is a book that has decided that the most important lesson from Watchmen is that American historia is equally as important as the end of the world. Watchmen is about many things. It is about the end of the world and one man’s (extremely stupid) quest to prevent that end. It is about how recent (at the time of publication) American history would have been altered by the existence of superheroes. And it is about how the complicated and messy lives of people are just as important as both of those things.

This book looked at the themes of Watchmen and decided the most important one was “What if superheroes existed during American history?”. The end of the world stakes are replaced by a meandering couple of years in Eddie’s life. The examination of the cosmic importance of simple human life is replaced by Eddie being a bit sad that he saw a girl that looks like Laurie Jupiter one time. But by god is this book going to tell you what it was like if Eddie was at the LA riots, what if Eddie personally instigated the Gulf of Tonkin incident, what if Eddie killed Bobby Kennedy so he could keep committing war crimes. All the scope and ambition of Watchmen, replaced by a checklist of American historical events guest starring Eddie Blake.

After the opening about how much everyone loves JFK, the rest of the book is more or less taken up by Eddie’s time in Vietnam, which is…extremely strange. I mean, I get why it’s so Vietnam focused: a) Eddie did canonically fight in Vietnam in Watchmen and b) as I already mentioned, nothing is more important in this book than American historia, but that said, I have no idea why this book focuses so much on Vietnam. The obvious reason to have your Comedian solo book focus so much on Vietnam is because you’re going to do a story about how the horrors of the war turned Eddie into the piece of shit we all know in Watchmen. In other words, you’re going to write a pretty basic Garth Ennis rip-off.

Except that that’s not what happens here. Eddie is already a deeply cynical piece of shit who happily murders people for the government. Hell, that seems to be the sole reason he’s sent to Vietnam in the first place. Nothing Eddie sees or does meaningfully changes him in any way. Hell, in one issue he gets high and butchers an entire village. The elderly, the children, the women (which the comic takes the time to explain to you were raped first just in case you weren’t sure); all executed and it’s not presented in any way a significant development for him. All it’s treated as is “whoopsy doopsy, our murder man murdered a bit too hard and did a little bit of a war crime which might embarrass us, the US government.”

The only actual point to any of the Vietnam stuff seems to be so Azzerello can turn to the camera and say “Hey kids, did you know that the CIA and the FBI have actually done some Pretty Bad Things???” Except even that is done in this sort of implied way that requires you to already know that those organizations have both done some heinous things. At one point Eddie and his squad go on a little mission to recruit (Violently coerce with the threat of death? It’s unclear) a drug lord to help fund their war effort. The thing is, if you don’t know about the history of the CIA’s involvement in drug trafficking it just seems like a thing that Eddie and his squad are doing on their own. Just a rogue operation from a real hard ass who just hates those god damn communists so much. If you know, you know, if you don’t know, there’s nothing here to inform you. I really don’t understand who this information is for. 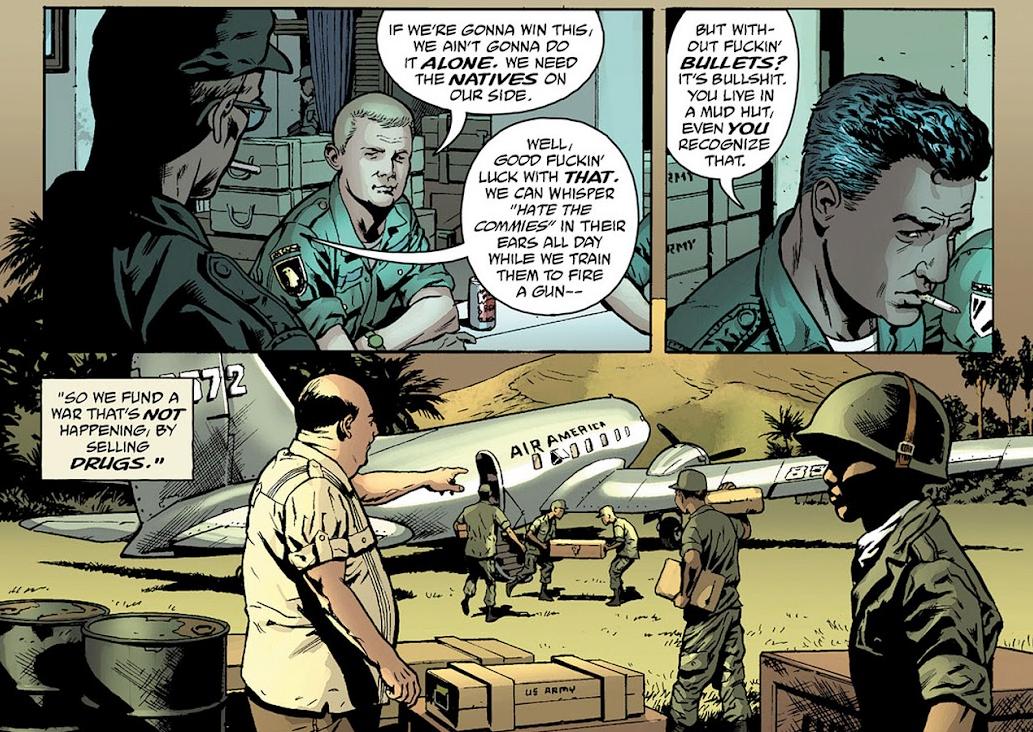 Continuing that thought, I don’t understand who this entire book is for. Nothing new is learned that changes how one might view the Comedian or Watchmen as a whole, nothing particularly important or exciting happens as far as this being a contained narrative is concerned. The only change this book seems to bring to the world is that a few nerds ended up with lighter wallets, some creators got paid, and some executives got to see some numbers on a profit spreadsheet go up.

Before Watchmen: Comedian is a Funko Pop in comics form; it looks like a thing you like but it’s a dead eyed simulacrum that has no value on its own without a better thing to point to and go “this thing reminds me of that thing.” It exists only to remind you that a thing with actual worth exists somewhere else and that you aren’t looking at that right now. It is a worthless object that has wasted valuable resources and whose ultimate destination is to end up in a heavily discounted second-hand sale. 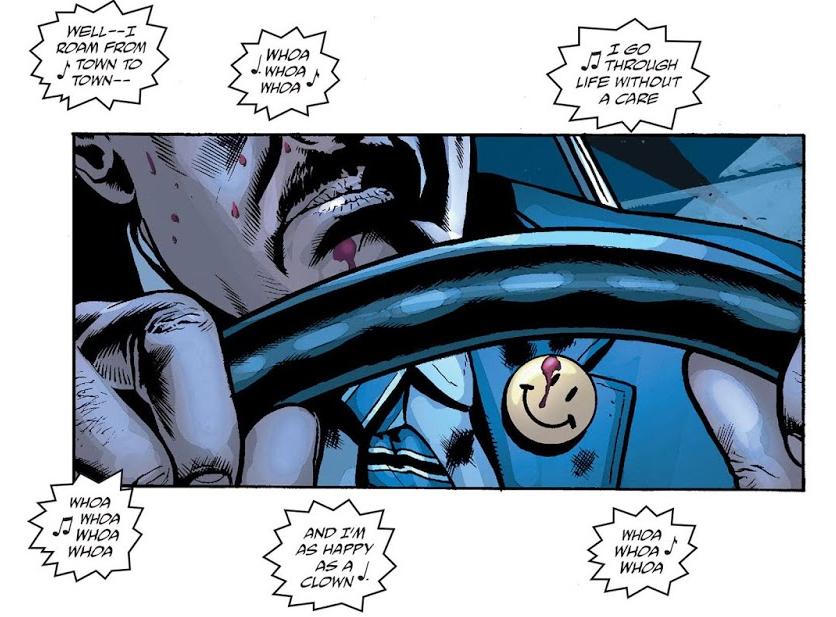 It is still a better comic than Before Watchmen: Rorschach though.