Thanks to reader support on Patreon, every week I put together weekly recaps and analysis of the biggest comics and trends impacting the medium.

If you want to get the full weekly recaps, in addition to other benefits like priority access to Q&A’s, reading order recommendations, and monthly custom reading playlists, consider supporting Comic Book Herald on Patreon.

Otherwise, enjoy a sampling of the month’s reviews and musings below: 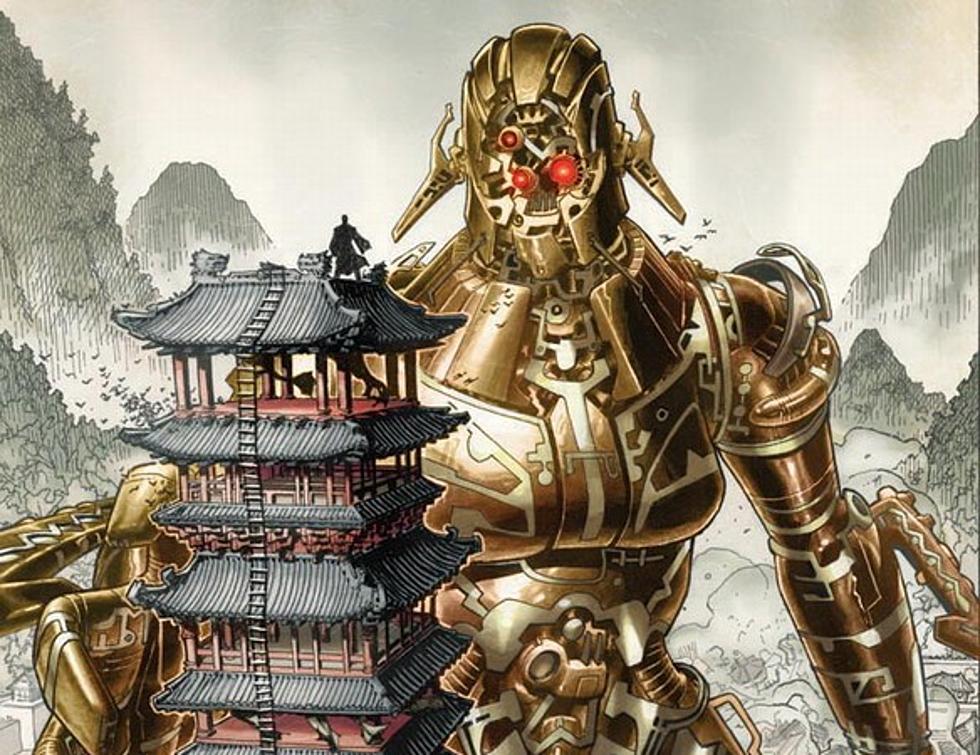 After a seven year wait, Jonathan Hickman and Dustin Weaver’s second six issue (plus one prologue) volume of SHIELD actually managed to conclude in print this month! In addition to officially terminating the Hickman-At-Marvel era (more on that in a minute), SHIELD also completes the hilarious Marvel Unlimited distinction of a publication period running 2011 to 2018 with six total issues (one fewer than years it took to complete).

My main question heading in to these publication date oddities was how much do SHIELD issues #5 and #6 change the perception of the series, especially given how long Hickman’s been doing this sort of storytelling now in his own creator-owned work? How damn good would these comics have to be to justify a seven year wait!

While the conclusion of SHIELD isn’t mind-blowing, it is an ending of a piece with the series. Issue #6 nicely boils down the competing ideologies of predestination vs. free will, and effectively concludes the warring opposition of Isaac Newton and Michelangelo. SHIELD was, oddly enough, the first Hickman book from Marvel that I read, and at the time, I didn’t think much of it. The weightiness and density of the philosophical musings simply didn’t resonate in a single read.

That’s certainly less of a dilemma now – I don’t think I’m overstating it to say Hickman is my favorite Marvel Comics writer of the 2000’s – although I’ll admit SHIELD still escapes my full-fledged love in many regards. It’s still Hickman’s most willfully obtuse Marvel series, and demands the most out of the reader.

It’s interesting how much of Hickman’s future style and themes come through in 2011 SHIELD. The “Everything Ends” mantra of Secret Wars is very much there in the recurring statement, “This is how the world ends.” Likewise, you have Hickman’s infatuation with albino-white mythical bird-ladies, which is ever present regardless of artist. (There’s a compelling unified theory of Hickman bird-ladies just waiting to be written one day.)

SHIELD very much feels like a precursor for Hickman’s creator-owned Image comics work. It’s only a Marvel Comics property through occasional reference points and the involvement of Howard Stark and Nathaniel Richards, instead focusing on the merger of the intelligencia and Marvel Universe heroics.

At its best, SHIELD is the perfect intersection of history buff and comic book fan. For example, Hickman and Weaver craft Sir Isaac Newton as sinister calculating evil, the former head of the brotherhood of the SHIELD, willing to serial murder to cement his place as the last deserving witness of the end of the world. More enjoyable, the pre-Volume 2 collaboration with Nick Pitarra features a thrilling showdown between a Kree Sentry and Archimedes piloting the Colossus of Rhodes. Come on!

There’s been an endless wail for the return of Jonathan Hickman to Marvel since his Jordan vs. Jazz send-off with 2015’s Secret Wars. His quasi-return finishing a years-old series actually has me feeling like the moment has passed. Don’t get me wrong, I’d pick up Uncanny X-Men written by Jonathan Hickman the second it was announced, but he’s done his part playing in this universe. Why would I even want his X-Men when we’re already getting East of West, Black Monday Murders, and more?

SHIELD feels like a stake in the heart of this idea, albeit a polite one. It’s Hickman’s most indie-lite Marvel work, and the Marvel bits feel less and less necessary with this style of story. After all, this is how a story ends. 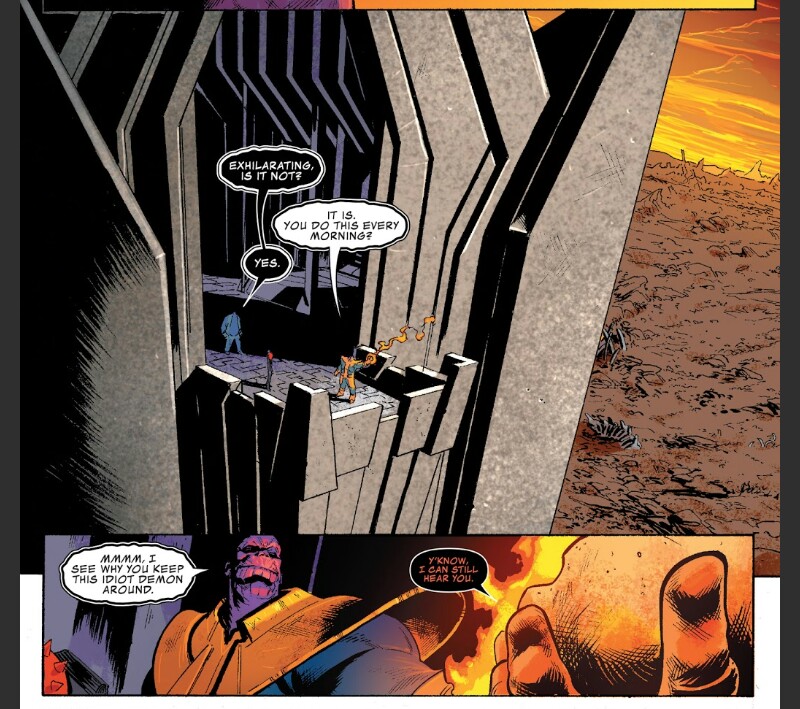 No writer in Marvel’s burgeoning new wave has received more instant accolades than Donny Cates, author of Marvel’s Thanos and Doctor Strange during the publisher’s short-lived “Marvel Legacy” launch. Alongside Cates’ creator-owned work across Image Comics’ titles like God Country and Redneck, and acknowledging the hype around his newest Marvel projects (Venom and Death of the Inhumans), it’s difficult to find a comic creator with a greater upward trajectory.

I’ve previously enjoyed Cates’ writing, but haven’t been floored in the way the hype suggests. Unlike, say, a Tom King, who entered my consciousness with top 100 favorite comics ever material (aka Vision, Sheriff of Babylon, and Omega Men), I haven’t yet seen Cates ascend to “all-timer” status. Having recently concluded his 10 issue run on Doctor Strange (alongside a Damnation event co-write), I decided to jump back into the Cates at Marvel experience to determine what about his writing was generating such success, and whether I should be celebrating it more. After all, setting the bar at “all time great comics” is a bit of a high goal.

Few Marvel storytellers, and comic book storytellers in general, employ as effective economy of narrative as Cates. It’s extremely easy to read a Cates written comic, and frequently very hard to stop. The storytelling goes down smooth and this is to the author’s immense credit.

The general formula I’ve identified to date is as follows (and given his talent, I fully expect the creative mind to blow this up with future outings):

1) A single high concept to hang the entire story. The important trick here is that Cates is very, very good at determining these concepts. Although they can sound simple on paper (Thanos meets his future King Self, Loki becomes Sorcerer Supreme, Hillbilly Vampires), there’s frequently ample room for world-building and drama.

2) Waste no time setting the stage – throw the characters into the fire and let their characterization shine through as the world burns. The non-linear storytelling allows Cates to dive straight in to the fun hook without worrying about explaining. Both Thanos and the Loki arc of Doctor Strange get mid-story explainers for the likes of cosmic Ghost Rider, or Loki’s ascension to Sorcerer Supreme.

3) Use all the toys in the closet! Across both Thanos and Doctor Strange, Cates makes extremely effective use of the Marvel playground, in a lot of ways via the perspective of a reader more familiar with 2000’s comics. Strange brings 2000’s staple The Sentry into the fold, and “Thanos Wins” is full of references to Annihilation (among, many, many others).

Thanos Wins is more conventionally fun, soaring through the cosmic toybox like a child locked overnight without their Ritalin in a KB Toyz. I’d argue the story is also more predictable in ways future-flung Marvel predecessors have established. It isn’t just the brutalized pet-Hulk’s Maestro beard that brings to mind Future Imperfect. The plot itself, and the frequent “trophy room” art references to the heroes of the Marvel Universe hearken back to that Peter David and George Perez early 90’s classic.

The work by Cates and artist Geoff Shaw shouldn’t be penalized for finding inspiration in some of Marvel’s most well-known dystopias, and the impact is likely thrilling for those less familiar. Nonetheless, it’s hard to herald this is an all-time classic when Jim Starlin is doing very similar work with Alan Davis in the pages of Thanos: The Infinity Siblings. I’m as biased as fans come with Starlin’s work on Thanos (for heaven’s sake, I once wrote no other writer should even try to write the character!), but credit where it’s due, Cates’ version is the clear re-readable winner.

For my money, Doctor Strange is a more successful ongoing, with “Thanos Wins” delivering what really would have been the perfect Marvel OGN for 2018. With artists Gabriel Hernandez Walta and Niko Henrichon on top of their games, and Mike Del Mundo knocking covers out of the park, Cates is able to take a clear full mission statement, dragging Doctor Strange out of his no-good terrible very bad year and into a world of “hope” once more. A lot of fun stuff happens along the way, including Asgardian gods of magic, Hell Casinos, and the best ghost dog in comics.

Amazingly, Doctor Strange is the rare ongoing that benefits from a crossover, with Damnation clearing space for another Stephen Strange blunder, and Wong’s rise to resurrect the Midnight Sons and clean up Stephen’s mess. The final Cates written issue in the series, Doctor Strange #390, is the type of comic that makes you wish the run could last for 50 more issues. Finally out of the chaos of Loki in the Sanctum and Damnation in Las Vegas, Stephen is tasked with simply cleaning up his veterinarian’s office, finding peace in his relationship with Zelma, and helping Spider-Man talk to an actual spider. It’s a near perfect Doctor Strange comic, and an excellent way to end the era.

At the end of the day, these are some of the best comics of Marvel Legacy, and among my favorite mid-year comics of 2018. I’m very excited to see what Cates brings to the table for Marvel next, as well as his continued creator-owned work. Honestly, I don’t think we’ve seen his classic yet, and that’s thrilling.