.
You are here: Home / Featured / The World That’s Coming: OMAC by Jack Kirby 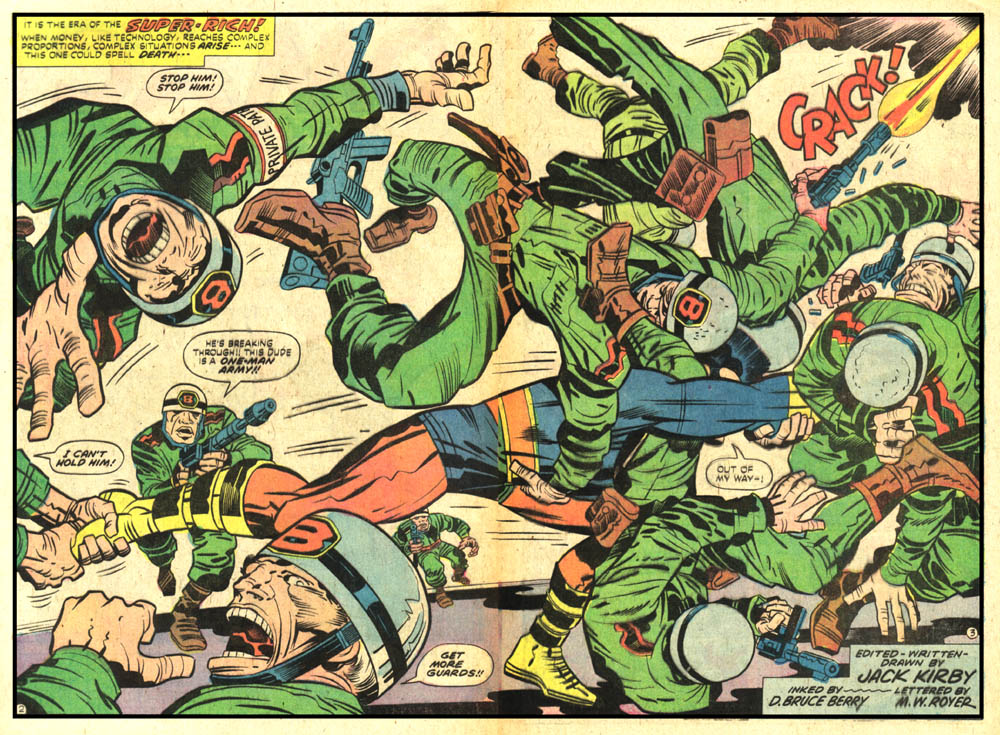 But it’s not bleak enough.

The story follows the titular One Man Army Corps, a cyborg being who has overwritten an average joe by the name of Buddy Blank for no other reason than he’s in the wrong place at the wrong time. OMAC, in turn, works with Brother Eye, a sentient artificial intelligence who works for the greater good, and for the Global Peace Agency, a multicultural organization founded by NASA to make the world a better place. And the world of OMAC is, to be quite blunt, a wretched place indeed.

It’s a world that posits that the super-rich can just buy a city for a day, that crime will transform into a global enterprise that creates wars for the sake of having wars, where people are sold as things, and everyone is monitored by computer intelligences. But it’s also a comic where the central hero is that kind of cop. You know the type, the kind that only believes in civil liberties when it isn’t inconvenient. Like Eastwood in Dirty Harry, Bronson’s vigilante in Deathwish, or — most chillingly of all —  the “cool” (and inhuman) detachment of Chief McClelland in Night of the Living Dead. The sort who will belt suspects without so much as a detailed talk of rights. Yes, the threats are monstrous and capricious in nature, but fiction about that kind of cop always finds a way to justify that kind of cop.

Take, for example, one of the low-level thugs OMAC deals with. Buck Blue is an average agent of a Crime Cabal, playing a key part in a service they provide: giving elderly people (of wealth) the bodies of the young. By force. Buck kidnaps or supplies such bodies to have their minds psychically evicted. He has no care for the sanctity of human life; a job’s a job and he’ll do what he has to. Every chance he gets, Buck tries to get OMAC killed and it always fails.

That is, until they reach the head Body Snatcher in the midst of a deal to sell Buck’s girlfriend to a wealthy old woman. Suddenly, Buck is infuriated by the gall his boss has in selling his girlfriend like she’s some slab of meat. He’s all ready to kill the man until Buck’s offered half a million dollars. Suddenly, he stops caring about his girlfriend and OMAC starts beating him, noting his justification in disregarding Buck’s civil liberties by saying “Your rights are precious…They’re your assurance of a fair deal! But how about that girl? The others held in the Terminal? Soon they’ll be dead!” As a fellow of his type once put it, “Rights? Sure. I’m all for rights. But not at the expense of order.”

However, in contrast to modern iterations of the OMAC concept where Brother Eye is basically Skynet and OMAC the Terminator, what’s interesting is that OMAC remains the moral center of the book. For all the discomfort there is at the very nature of his existence (he literally wiped away a human in order to exist), OMAC himself is a moral good, always framed as better than those he fights against. Justified in his massive brutality in a world where the police use “humane” tactics against the criminal element. Furthermore, the horrifying implications of “We wiped away a human being” are not actually dwelt upon when it comes to OMAC. It’s only in the first few issues that the idea is explored in that context. We understand that there’s dramatic irony in the Blanks being recruited to raise OMAC, the thing that overwrote their son. But they’re basically dropped after one issue, never to be seen again. To a modern reader, consuming the book in one sitting, the implications are there. But you can also tell that the Body Snatcher arc would have been improved if there was a degree of comparison between OMAC and the Snatched.

Even in the final issue, where everything goes to hell, where the goodies are defeated and evil triumphant, it all feels… hollow. One gets the sense reading OMAC that Jack Kirby’s heart wasn’t fully invested in the comic. The art at times feels rushed and sloppy like this was a paycheck comic for Kirby more than anything else. Some of the faces lack the detail and pop energy that comics like New Gods or Mister Miracle pack with every page. And he didn’t even do the cover for the final issue.

That isn’t to say that Jack Kirby didn’t pull out some truly jaw-dropping visuals and ideas. The first issue alone is jam-packed with the raw fury and energy that defined Jack Kirby. But by the end of the series, that energy is lost. The series never experiments with the form the way other Kirby comics would. What’s worse is that the ending ultimately feels like a run-of-the-mill sci-spy comic. A mad scientist with a plot to steal the world’s water? The hero, an ordinary guy who is in way over his head? The defeat of said mad scientist coming from his own hubris? We’ve seen this all before. And the best of Jack Kirby’s comics feel like nothing that has ever been made.

In the end, it is perhaps best to look at OMAC as a ruin. A thing that had great potential, but was instead canceled before it could expand (indeed, OMAC actually lasted fewer issues than The Forever People). Indeed, that is perhaps the best way to look at the 70s as a whole. It died and died painfully. It was a period where all our hopes and dreams had died. When they had betrayed us all in favor of wealth and power. Maybe that’s why people think Charlie Manson’s family killed the 60s: the aesthetics of the hippie movement killed some of the 60s most famous young people. A con about an oncoming race war mixed with a guru philosophy had killed people.

So of course the 70s would be distrustful of dreamers. And, for all the cynicism, all the bitterness, all that he was being used and abused by a system that wouldn’t even give him a proper paycheck, Jack Kirby remained, even in the 70s, even in OMAC, a dreamer. A man who believes in the best in all of us. That there could be a police force who wants to make the world a better place, who will go after the monsters who wage war on an atomic level. That there could be a better world, a better way of being.

In many regards, it’s worth comparing Kirby to another utopian dreamer: George Romero. Like Kirby, he too believed in a better world, one free of the cruelties upon which we saddle ourselves with. He critiqued capitalism, sexism, and war. But unlike Kirby, who spent the majority of the sixties spinning amazing fantasies about men who could fly, technology that could change the world, and life on other planets, Romero closed the decade with a black man surviving an apocalypse only to be killed by a racist mob.

Romero spent the oncoming years recreating Vietnam in the American suburb, highlighting the ostracization and isolation of the American housewife, and exploring just how much people will hurt the elderly if they can get away with it. Like Kirby, Romero held true to the dream. He believed in that better world with all his heart. But he also was aware of just how cruel the world that is to come would be. The cops aren’t going to save you. Even if they come from NASA, an organization that was, quite publicly, outfitted by Nazis.

The utopian dream will break your heart.

There’s a thrill to be found in OMAC. It’s a delight to read and well worth your time. The first couple of issues are quite amazing, with ideas you wish were followed up upon by other writers and artists. Hell, one wishes this whole series got to go on even longer than eight issues just so Kirby could go even further into the implications of this bleak and cruel world that could be. OMAC is never as bleak as it needed to be and it ultimately craps out by the end. But Kirby was not one to write about the death of his dream, of how the world is fundamentally broken and the path forward is lost. He’d come up with a better one.