You are here: Home / Featured / The Nice House on the Lake Vol. 1 Review!

Every friend group seems to have that one person who stands at the center of it. They’re the one who connects everyone else together; the one who organizes the hangouts, the parties, the group texts and vacations; the one who drops everything for a chance to catch up and makes each person in their life feel like the most important person in their life. As someone who tends to be on the more introverted side, someone who sometimes has trouble keeping in touch with people I care about, I’ve always been a little envious of those who can effortlessly balance a number of close, meaningful friendships and maintain them for decades, no matter the age or the time apart or the distance that might separate them.

The Nice House on the Lake

#1-6, by writer James Tynion IV with art by Álvaro Martínez Bueno and colors by Jordie Bellaire, pose a question: What if that friend, that person you’ve bared your soul to, or dated, or look up to, or all of the above; what if that person you trust is not who you thought they were, and might be something a whole lot more sinister than you could have ever imagined? The answers to that question – at least the ones that are doled out in this first volume, released in trade paperback form on March 1 – make for one of the most compelling comics I have ever read.

I’ll note here that I’m going to do my level best to avoid discussing specific plot points, but there are some minor spoilers ahead.

The Vacation of a Lifetime

The premise of the book is simple enough: ten friends and acquaintances from all walks of life are invited to spend a week away from it all at a gorgeous house on a gorgeous lake by their mutual connection, Walter. Some of the group have known Walter since high school, others since college, and others – like Ryan, the viewpoint character of issue #1 – have only known him for a relatively short time and haven’t seen him in years. They all agree, though, that Walter is one of a kind. And his idiosyncrasies are apparent from the start; he’s organized the get-together over e-mail and has kept the guest list anonymous to everyone but himself by referring to each invitee only by a codename based on their occupation, along with an accompanying circular symbol to identify them. All just another one of Walter’s games, right?

As the guests get acclimated to their splendid surroundings for the week, Tynion gives the reader something of an omniscient role – we find ourselves privy to information that makes clear in no uncertain terms that all is not what it seems. Issue #1 opens on Ryan – codenamed “The Artist” – sometime in the future, surrounded by odd statues and underneath a sky that seems bathed in fire. She speaks directly to the reader while she casually bandages an injured eye and reflects on the first meaningful interaction she had with Walter. Looking straight into the “camera”, she recounts a conversation over drinks years ago, when Walter asked her how she thought the world was going to end.

After we get this glimpse into an apocalyptic future, in the present we’re shown Walter’s notes about each of his guests as Ryan, the relative outsider of the group, meets or reintroduces herself to everyone. In addition to each person’s codename, real name, and age, the entries denote how they came into Walter’s life – which “cluster” they belong to – and, most mysteriously of all, when they were “chosen”. But the characters we’re meeting, of course, are blissfully unaware that anything could be amiss when Walter arrives with bags of goodies and steaks to throw on the grill. As the meat sizzles and the others drink and talk by the pool, Ryan sits alone and takes out her phone. What she sees upends the meaning of the entire vacation and leads to shocking revelations that change everything the group thought they knew about Walter.

The Horror of Loss

While eerie and fantastical things occur throughout the first six issues, the series is firmly rooted in the real world – moreso, in fact, than I ever expected. The first time we see Ryan in the present day, as she walks up the long, steep driveway to the titular abode, she is wearing a KN95 mask, and one of the other guests, Norah, uses an infrared thermometer to take her forehead temperature before she can enter the house. These are striking details for Tynion to include, and give the characters and the reader an immediate connection through shared life experience. Tynion establishes that these are characters who have already had to deal with the same pandemic-induced uncertainty, turmoil, and grief those of us who exist in three dimensions have been enduring for nearly two years now. This story choice helped me identify with everyone on the page right off the bat, and made subsequent events resonate deeply in a way I simply wasn’t expecting going in.

That detail is far from the only thing that grounds the book in a recognizable version of our world. Tynion and Martínez Bueno make a real effort to provide an authentic picture of life as a young(ish) adult in the 21st century, from the various lifestyles and identities represented within the friend group to the full-page spreads depicting the all-too-familiar windows of Instant Messenger conversations shown during flashbacks to the characters’ high school days.

Beyond these details, the brilliance of The Nice House on the Lake is in the way it manages to keep the focus on the internal struggles of the ten central characters, even while parsing out information about their circumstances bit by bit. This is not exactly a novel approach for genre fiction, but you don’t have to reinvent the wheel if you build a wheel this expertly. Every issue has a different POV character, and through these various perspectives, we not only learn about each person’s history with Walter, but we also get to know these people through how they handle the losses Walter’s betrayal has brought about – the loss of the Walter they thought they knew, the loss of the way things were before this “vacation”, and the (possibly?) existential losses occurring in the world beyond the lakehouse where they now find themselves trapped. One character withdraws into grief and despair. One goes searching for answers. Some choose to create a routine and act like everything is fine. Tynion skillfully uses the ways each houseguest adjusts to their new reality to flesh out their characters and bring both them and the reader closer to the truth of what exactly has happened to them. 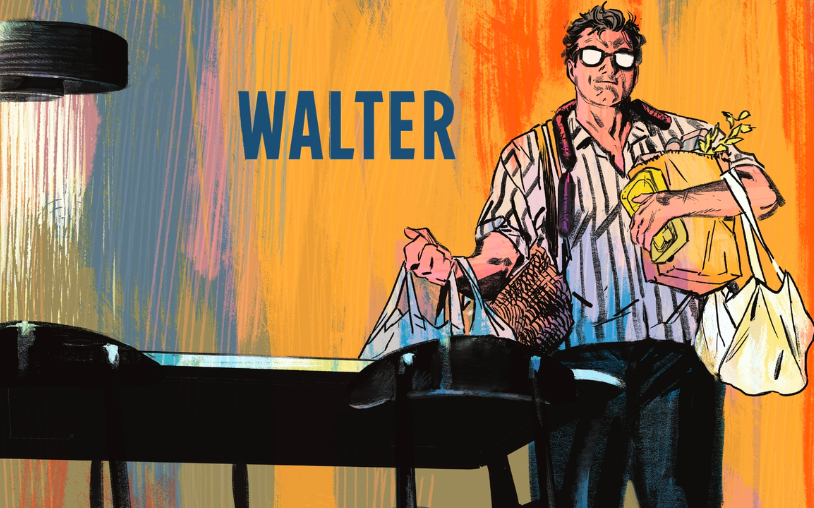 Back to those eerie and fantastical things I mentioned earlier. I’ve seen The Nice House on the Lake marketed as a horror comic, and while there are certainly some frightening things that happen to and around the characters, I found myself engaging with it as a mystery just as much. And the mystery at the heart of this book is truly engrossing. Tynion does a remarkable job doling out little hints of the bigger picture here and there, but it never feels like the full reveal is being drawn out just for the sake of it. Minor plot points, turns of phrase, and off-hand comments in one issue are given a whole new significance three issues later. There were plenty of times I found myself flipping back to earlier moments once some stunning piece of information was unveiled just so I could remember if there had been any clues about the true significance.

Martínez Bueno’s art is essential to the uneasy feeling that permeates the book and keeps the reader on edge. Walter is drawn wearing a pair of glasses with opaque lenses that perpetually hide his eyes, imparting an otherworldly quality to an otherwise unremarkable-looking man. It immediately makes him stand out from the others in the friend group. Martínez Bueno further shows off in several two-page spreads full of grotesque imagery that hit just often enough to keep the reader from getting too comfortable. Outside of the character work, Martínez Bueno also populates the comic with various seemingly alien circular motifs – the symbols each guest is assigned have an almost linguistic quality to them, and there are strange, geometric statues dotting the property around the lake, all of which contribute to the feeling that things are not quite right.

I’d be remiss if I didn’t call out Jordie Bellaire’s exceptional coloring as well. The comic’s most impactful scenes – the post-apocalyptic flash-forwards, the shocking moments of revelation – are set against intense backgrounds of color, deep reds, blues, oranges, and whites that emphasize the importance of events. The technique enhances Martínez Bueno’s mostly naturalistic art and heightens the ambience in a really effective way.

If it’s not obvious by now, I absolutely adored this first volume of The Nice House on the Lake. It is a stellar book, and everyone involved in its creation is firing on all cylinders. I cannot recommend it highly enough, and can’t wait to see where Tynion and crew take the story over the coming months.