As Marvel celebrates their 80th anniversary in 2019, it’s also the real-time marking of 80 years to go until Marvel’s future “2099” timeline comes to pass. The symmetry was too great for Marvel to pass up on, hence a mini-event crossover primarily running through the pages of Amazing Spider-Man.

The solicits promise a team-up between Peter Parker, Miguel O’Hara (Spidey 2099), and Doctor Doom, which more or less pushes this into my must-read territory. Plus, the Amazing Spider-Man issues are some of the first by Patrick Gleason since signing to Marvel, so there’s additional incentive to check out the art.

For the unfamiliar, Marvel 2099 is a concept created in the 1990’s of a future timeline imagining what Marvel’s heroic legacies will look like in the distant future.

Miguel O’Hara is unquestionably the longest lasting creation of the 2099 universe, with appearances in both modern comics (Spidey 2099 has a fun role to play in Superior Spider-Man) and non-comics media (Spider-Man: Shattered Dimensions

and the post-credits gag in Spider-Man: Into the Spider-Verse

Marvel 2099 is frequently one of the last remaining vestiges of uncollected stories (there’s a reason I bought the single issues of X-Men 2099 when I caught them for a dollar each at a local comic book store!), but Warren Ellis is a creator of enough pedigree that his run on Doom 2099 does actually have a collected edition!

It’s far from Ellis’ best superhero work, but I’ll be honest, that blue cape and gleaming silver mask of future Doom go a long way to making me forget any problems the comics might have.

The most recent appearances of Punisher 2099 come in the pages of the Al Ewing written Contest of Champions, a post 2015 Secret Wars mobile game tie-in comic! You know, the classic familiar genre.

Since the 2099 crossover will primarily flow through the pages of Amazing Spider-Man, it makes sense to keep up with the “Marvel Fresh Start” era run by Nick Spencer with art primarily by Ryan Ottley and Humberto Ramos. 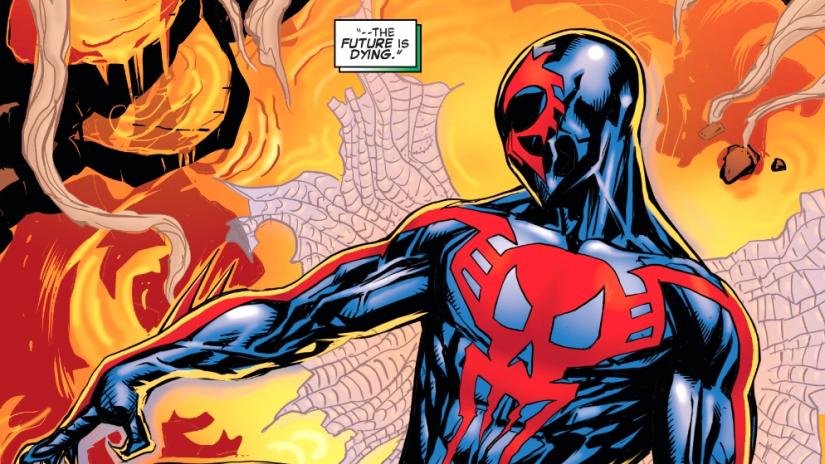 If you’re going to read all the 2099 tie-ins, I recommend tackling them here (all are listed below). The exception is Spider-Man 2099 which fits more sensibly right before the final 2099 Omega #1.

As noted above, you can really read these at any point between 2099 Alpha and 2099 Omega.

The Chip Zdarsky written take on future Doom is my favorite of the bunch!