You are here: Home / Featured / The Best Comics To Read Before Spider-Man: No Way Home!

You may have heard, but Spider-Man: No Way Home is poised to be kind of a big deal. The multiverse hopping mega movie has been hyped up for months, with rumors swirling about the return of virtually anyone who has ever had a major moment in the 2000s Spider-Man movie-verse! Whether you’re here for JK, Alfred, Willem, Tobey, Andrew, Jamie, or all of the above, we know No Way Home is set to deal with the fallout of Peter Parker’s double life revealed at the end of Spider-Man: Far From Home, and that the Marvel multiverse is very much at the center of where the MCU is heading.

Below you’ll find my picks for the best comic book stories that cover similar territory as Spider-Man: No Way Home, spanning the multiverse, the relationship between Peter Parker and Stephen Strange, and what it’s like when Spidey’s identity is out of the bag. Enjoy, and let me know any picks you’d add to the list in the comments! 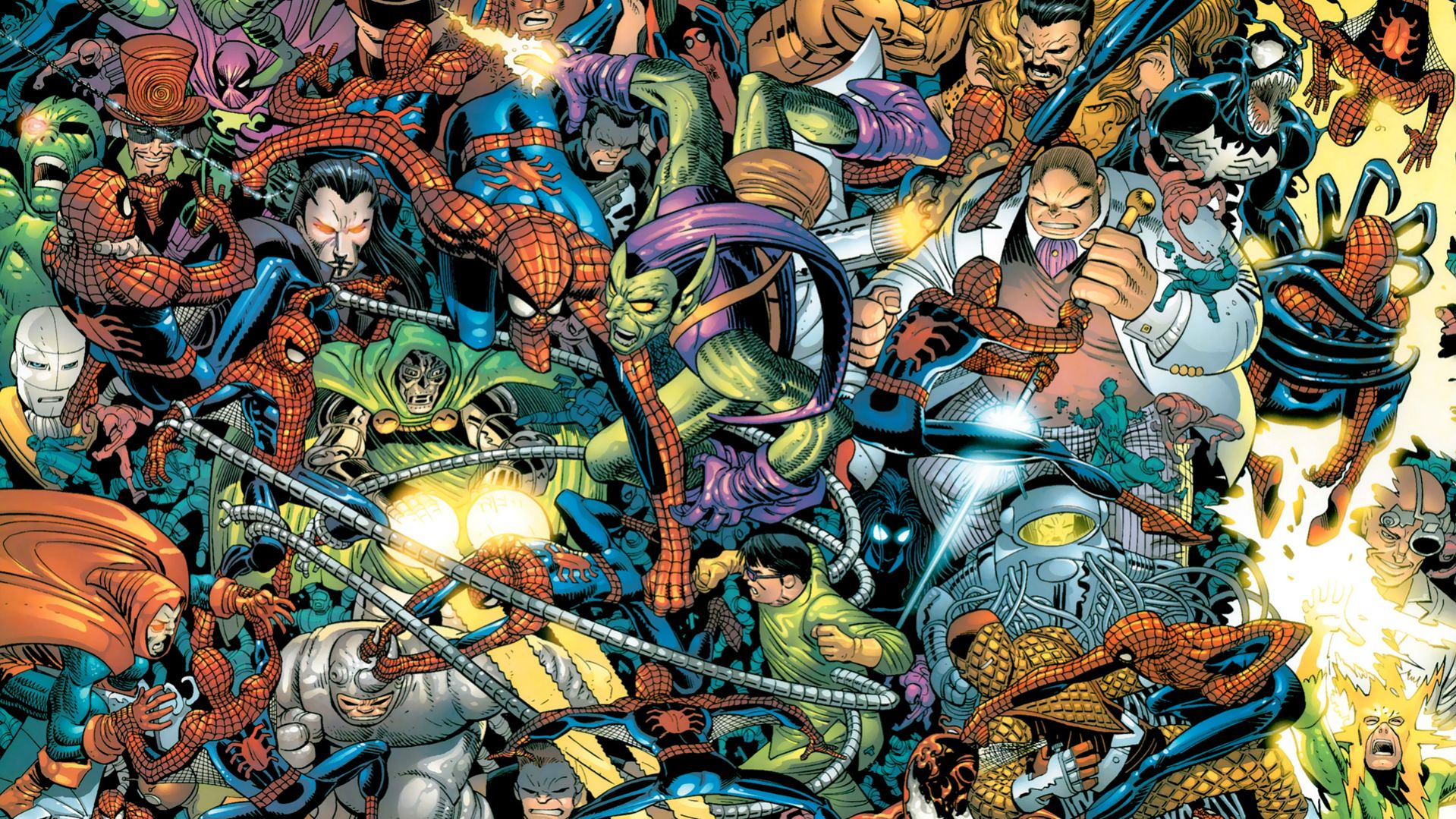 This three part story culminating in the 500th issue of Amazing Spider-Man (a feat so momentous, Marvel reverted to their legacy numbering after rebooting from a new #1 in 1999) follows Spider-Man and Doctor Strange traversing dimensions and time in order to thwart an invasion by Dormammu and the Mindless Ones. “Happy Birthday” takes place during the better moments of the J. Michael Straczynski and John Romita Jr. run on the title, when Peter Parker is teaching high school science and married to Mary Jane Watson.

The dimension hopping with Doctor Strange is used to great effect in the landmark issue #500, as Spidey considers what the spider-bite has meant for him, and what it means about where his future’s heading. Appropriately, too, while Doctor Strange is clearly the greater power and substantially more capable of dealing with problems of this scope and scale, it’s Peter who prevents Strange from committing sacrificial suicide and finds a better solution.

Welcome to full fledged Sam Raimi’s “Spider-Man 2” fever, with a Brian K. Vaughan (Runaways, Saga, Paper Girls) written miniseries centered around the scheming of Doctor Octopus! This is a nice breezy dig into the longtime archenemy of our favorite web-slinger, with a fresh focus on the photography angle of Peter’s work with Daily Bugle. Vaughan’s certainly written more iconic comics (R.I.P. Y The Last Man on Hulu), and there are definitely bigger Spidey vs. Ock stories (Superior Spider-Man and Spider-Man PS4 come to mind!), but this one’s a nice hidden gem you won’t see discussed too often. 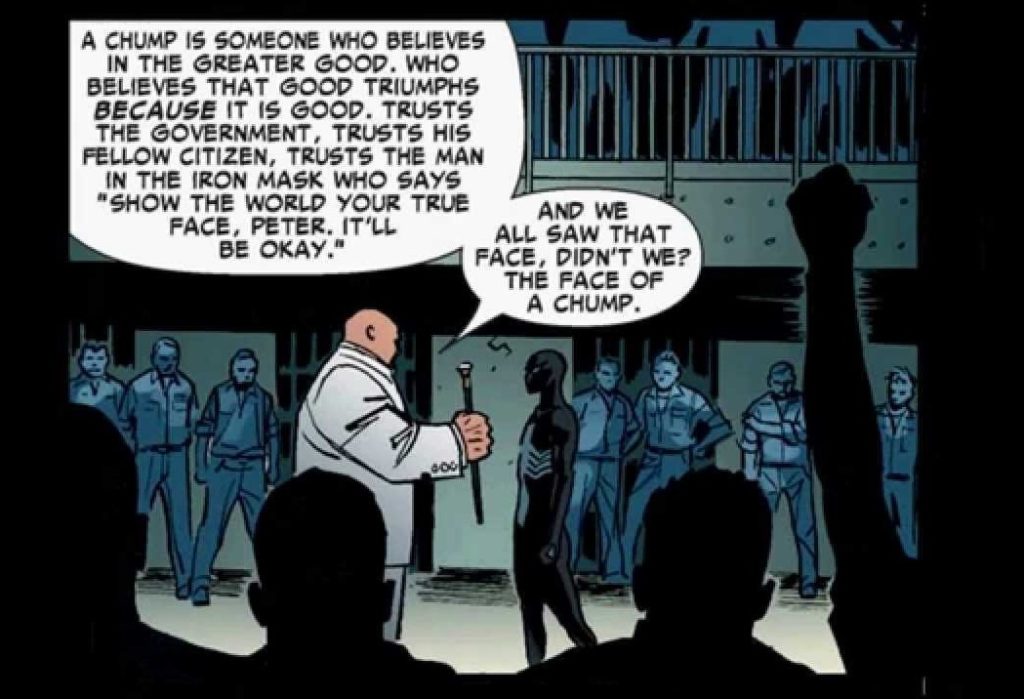 Spider-Man: Back in Black

During the 2006-2007 Marvel comics event Civil War, Peter Parker reveals to the world that he’s Spider-Man. It’s the first time this happens in the Marvel Universe, and naturally, Peter feels good about the decision for all of 42 seconds!

In the aftermath of the reveal, and Civil War’s conclusion, the dangers of his outed identity and status as an illegal vigilante superhero converge in all the worst ways. The tragedy Peter’s been fighting to avoid since day one of Steve Ditko and Stan Lee’s Spidey genesis comes to pass.

Now, there are more direct reactionary stories to Peter’s secret identity loss (here’s looking at you Spider-Man: One More Day

), but I’m not here looking to recommend intensely controversial and derided comics just because they’re relevant! Instead, I think it’s a lot more enjoyable to see how J. Michael Straczynski and Ron Lim reacted to this status quo change for Peter Parker, so long as Marvel editorial was comfortable with it lasting. 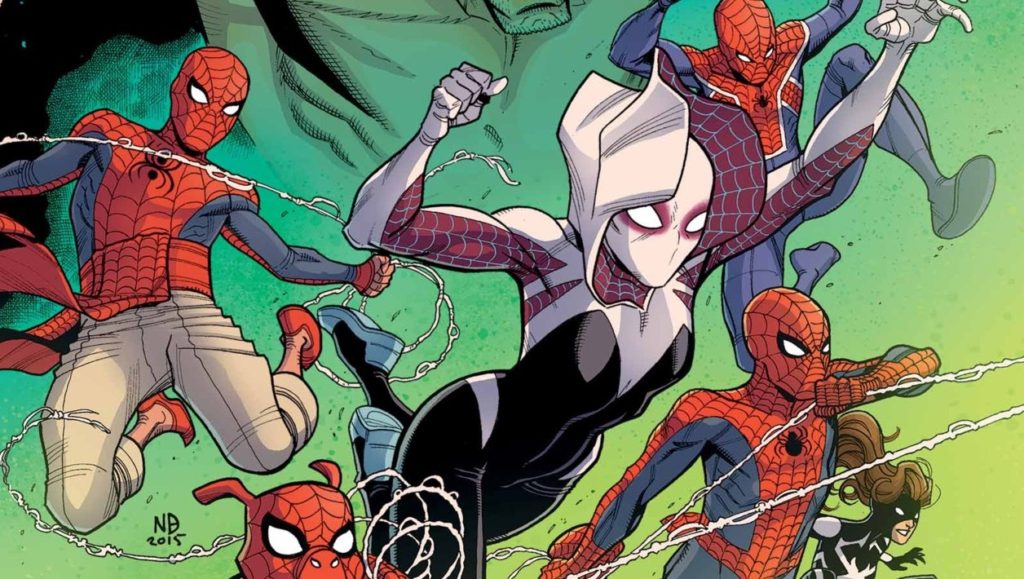 The easiest option for exploring the Spider-folk of the Marvel Multiverse is through the 2014 to 2015 event, Spider-Verse. And while conceptually it’s a blast (from Spider-Gwen to Japanese Spider-Man, this event is filled to the brim with brilliant Spider-characters), there’s little use fighting that Sony’s Into the Spider-Verse

perfected the formula with their animated movie. Dan Slott and team’s comic walked so Into the Spider-Verse could trust fall off a building.

Nonetheless, if you do have a hankering for a multiverse full of Spiders, I’d actually point you to the post Spider-Verse team, the Web Warriors. The Web Warriors return during Marvel’s 2015 Secret Wars event, and then spin into their own ongoing series written by Mike Costa with David Baldeon art. It’s a particularly good run to hang with the likes of Spider-Gwen and Spider-Ham, as well as some comics faves like Anya Corazon and Pavitr Prabhakar. 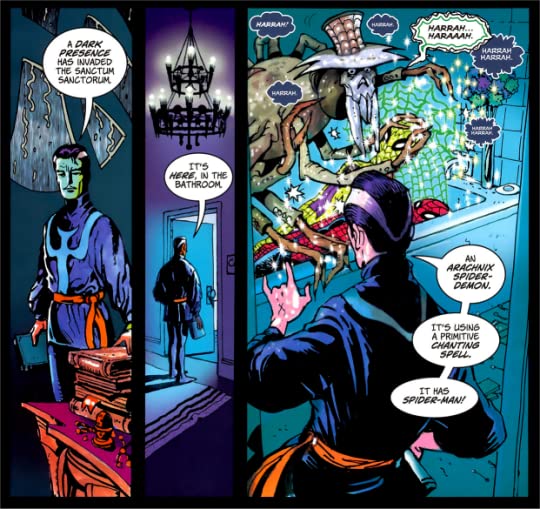 Spider-Man and Doctor Strange actually have a long history of comic book team-ups, dating back to the Steve Ditko spectacular in 1965’s Amazing Spider-Man Annual #2, and celebrated in the 90’s Spider-Man: The Animated Series.

If you want a more modern, psychedelic look at Spidey and Strange together, check out Brendan McCarthy’s Fever. In three issues McCarthy takes you on a trippy journey through Spider-Demons summoned by Alistair Crawley, and a Spider in a top-hot that steals Peter Parker’s soul down Dr. Strange’s bathtub. If you like your Sorcerer Supreme with an extra side of strange, this is the one for you. 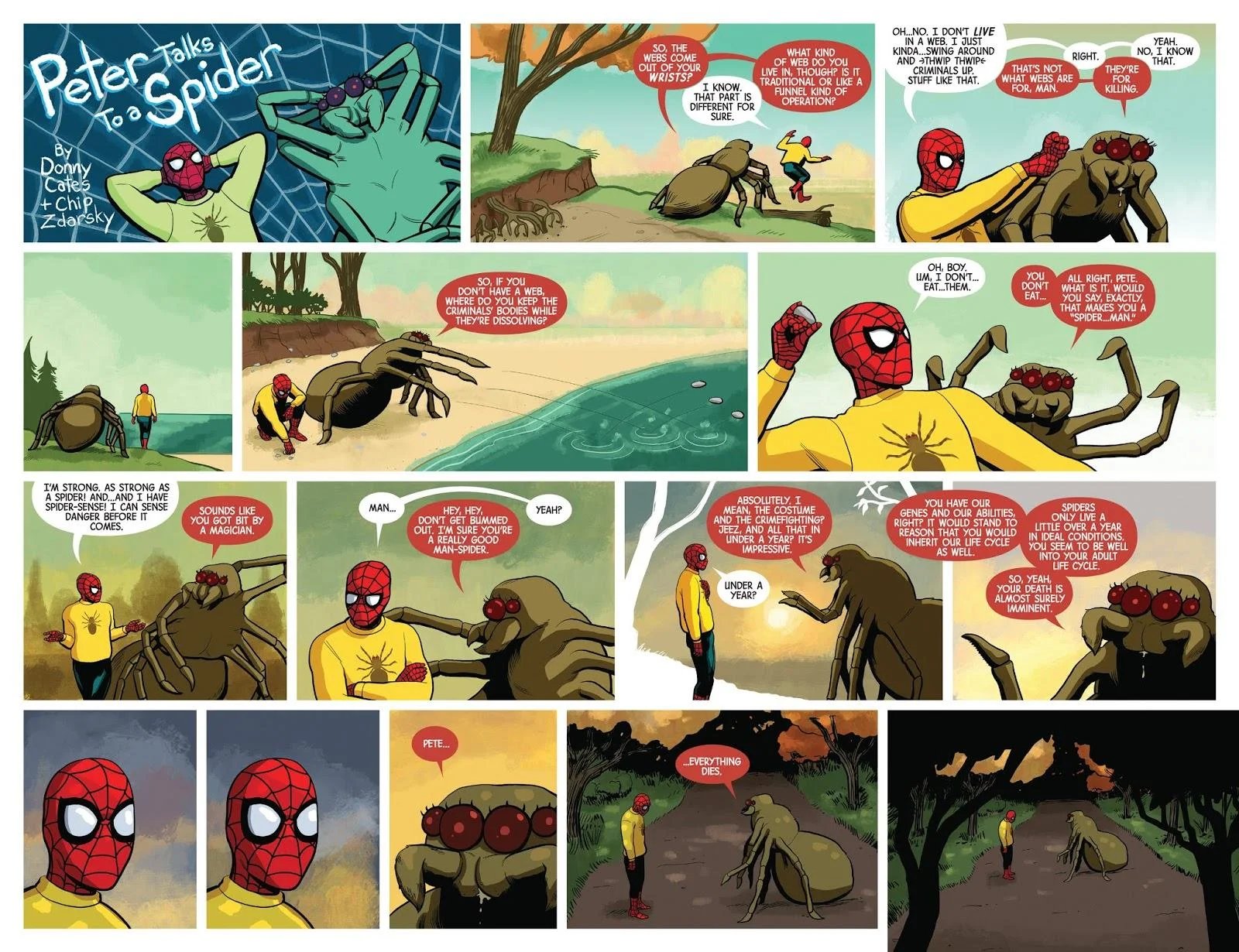 Last but not least, thanks to Twitter use @PrinceLegoSet for suggesting the above double-page spread from Donny Cates and Chip Zdarsky, where Doctor Strange grants Spider-Man his wish to communicate with actual spiders.

Much like we’re about to see in “No Way Home,” not every great idea goes according to plan, nor is virtually anything Strange and Spidey consider a great idea actually very safe at all!

(Oh by the way, the rest of this comic is very good, too, and largely stand alone!)