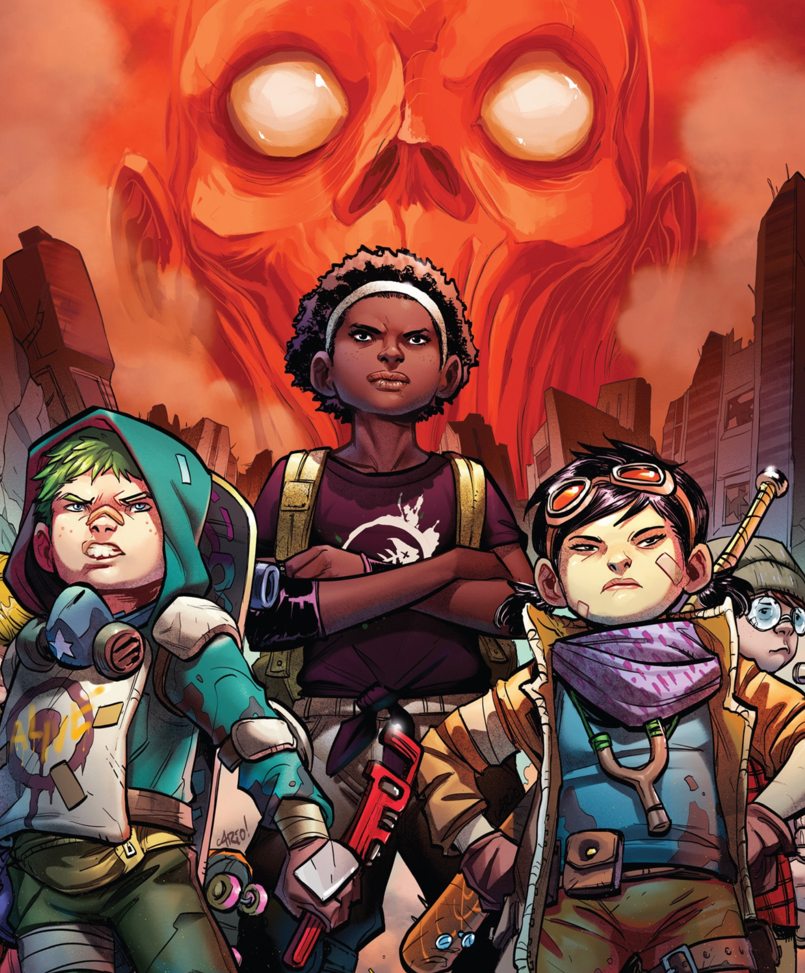 [all covers by Ario Anindito and Pierluigi Casolino]

Renowned literary horror novelist Victor LaValle’s second comic series out from BOOM! Studios isn’t just a perfect follow-up to Destroyer as another classic SF story twisted about, turned on its head, and updated to the present moment—the five-issue Eve, an 11-year-old girl’s quest across a US devastated by climate change and a super-plague, is even more rewarding than Destroyer’s dark beauty and hope-beyond-despair.

Like Destroyer, Eve centers on a young person and their complicated familial bonds, through the lens of humanity’s conflicted relationship to modern science, tech, and capital. But unlike the undead Akai’s story, Eve’s journey unfolds across a broader landscape and a stranger temporality, so her relationships are more varied and complex, for all that many are, poignantly, cut short too soon—the story’s scope and brevity effectively deepening its bittersweet notes throughout.

Eve also feels like a much quicker reader than Destroyer, less dense with explicit allusion and concept and more straight-ahead in its narrative. But even as that assumption is later complicated, the story’s momentum keeps building till the end. In fact, how much subtle worldbuilding is packed in with such economy and spareness is truly impressive, maybe even easy to overlook as the story is so propulsive and engrossing. But even as the pacing moves at a quick clip, each issue is distinctly structured by new turns and revelations. And of course, Eve herself stands in for all the children of tomorrow. Clearly, a father has written this story for his children, but more than that starkly honest but beautifully hopeful gift, it’s a modest plea to humanity to not leave such a world to our children’s children. From message to technique, all these qualities are integral to Eve’s success; the extraordinary novelist Victor LaValle has fully arrived as a masterful storyteller in the comics medium.

These five issues could easily be just the first arc in a greater epic to come, but all the same, what you get here is a complete and satisfying story—even as it leaves us wanting more from both the creative team and the future history of Eve’s world, which in many ways will be our own future.

The basic/mild spoilers below are from only the first issue and the first half of the second.

The premise as seen in the opening issue has young Eve waking out of a secluded natural paradise, discovering that her memories of at least the past handful of years (as far as the reader can tell) have all been virtual. Instead of finding herself in her brilliant scientist father’s secure living and working space just outside New Orleans, she emerges from what might be (as far as the reader at this point can surmise) either suspended animation or an incubation vat to encounter first an android reshaped into a beloved teddy bear and then a drowned Manhattan populated only by plague zombies. Fortunately for our preteen, the virus (unlocked from disappearing arctic ice) spares only those who haven’t yet hit puberty. But of course, beyond the peril of encountering what her companion Wexler calls “sumers,” she’s pressed for time, considering the magnitude of her mission.

Besides adding dramatic tension, the plague is primarily meaningful as a subtle analogy to our present-day hyper-consumerist and -extractive capitalism. 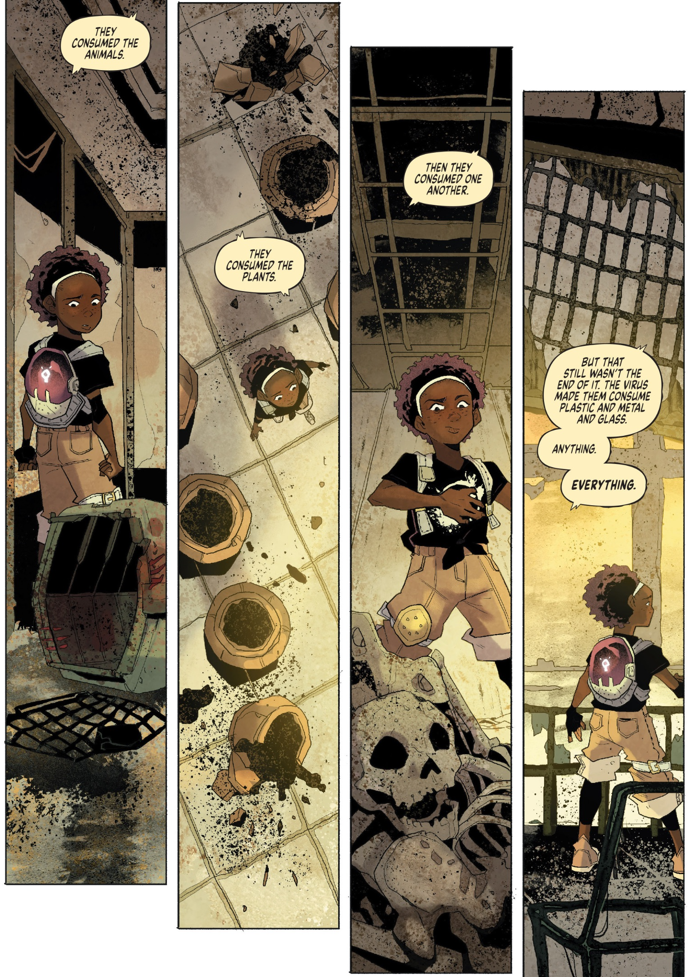 The gradually unfolding mystery of Eve and her family’s backstory before the narrative’s opening is definitely what keeps this brief and (not overly) gloomy postapocalyptic picaresque from being too like others of its kind. For that matter, it’s not entirely clear what the accomplishment of her mission will entail until the final issue—for along with our young protagonist, the reader quickly realizes that the two mysteries, alpha and omega, are connected, clues to which make our anticipation for final revelations all the greater, especially with the reveals of issue #4.

Also distinctive, though, is LaValle’s use of mythic allusion, which again is much more pared down this time and focused. The allusions are only explicit in the discussions between Eve’s father and his AI companion—in an orbital space station overlooking a devastated planet that seems to retain its vitality and beauty at that vast remove. The small group of unnamed scientists was hounded into space by a fearful humanity that had clearly lost its trust in modern institutions, even though that particular backstory is left vague. Their project to reseed the Earth with viable plant life is called Osiris, in honor of the Egyptian god of agrarian seasons, of “fertility and rebirth” (Asir). This positions Eve as Osiris and Isis’s child, Horus—who in order to ascend to his father’s throne had to overcome his uncle, the “jackal” Set, who, in this case, is the AI, E92. Or is it? 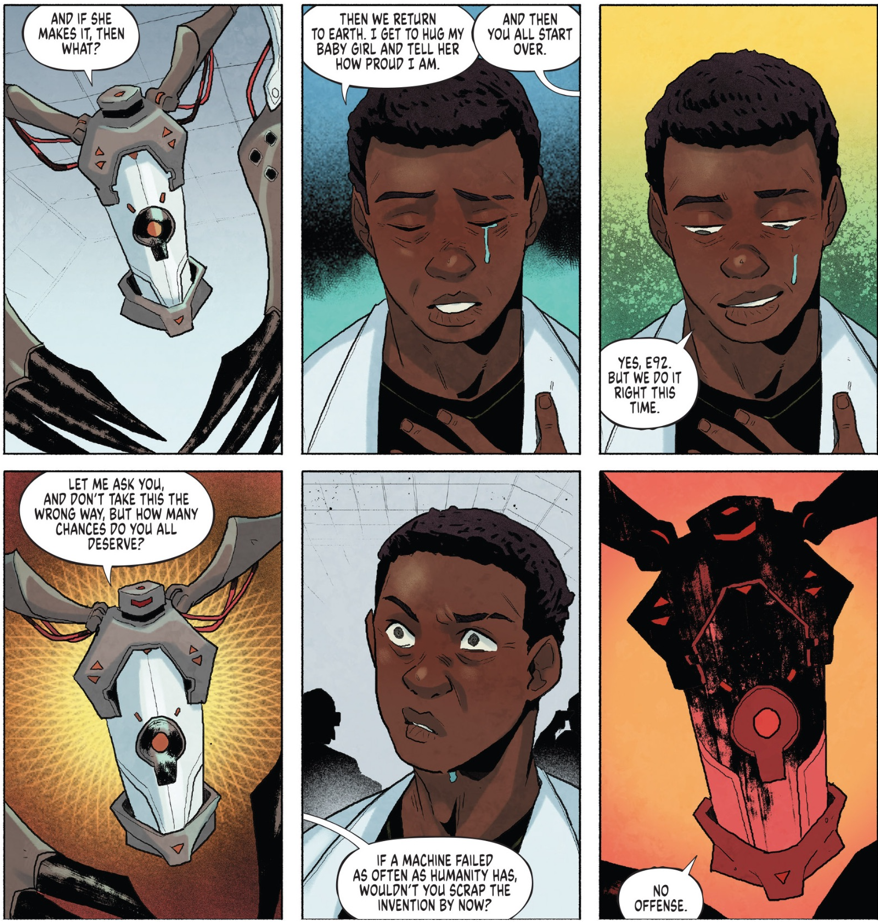 Perhaps E92 believes itself the hero of its own evolution to self-awareness, working to slay its enemy and erstwhile companion, “Apopsis, the serpent of chaos.”

But will the old myths really matter in whatever world comes next? The AI’s consciousness is distributed, both present on the space station and in the teddy bear Wexler, and it/he proves in its own way as complexly justified yet flawed as the rest of the small cast.

As affecting as the story, Victor LaValle’s postscripts every other issue are particularly stirring. There, he addresses real-world themes that so urgently connect our own world to Eve’s; they are, after all, the same except that hers must be toward the end of this century—and even while the zombifying super-plague is sensational, it’s possible that the melting of ancient ice and permafrost could unleash archaic microbiology that might very well wreak havoc on regional and aquatic ecosystems. The news never seems to get better nowadays, and yet, even though a couple of the story’s characters acknowledge that the Earth would be healthier without humanity around, neither LaValle nor Eve ever give into despair. Which is impressive, given the lack of wishful-thinking sugarcoating on display here. It all comes down to a child’s innocence; children do not choose what they’re born into. Let them have their own chance, seems to be the message, without too much interference from “above” (such spatial analogies work well given the story’s premise), and indeed, whereas Destroyer allows the young Akai such freedom only in prospect, Eve’s non-hero hero gradually realizes throughout just how unmoored she is from what came before. Whether this will allow future humanity to thrive any better than our own civilization currently in its terminal state (however wishfully we carry on) remains to be seen.

LaValle’s direct address to the reader speaks to the fact that it’s kids today who are least ignorant and susceptible to wishful thinking; it’s not only that they can’t afford it—whistling dumbly while kicking the can down the road just doesn’t even compute. With boomers on their way out but still dominating our culture with their heretofore unnaturally long lives and industrially large numbers, it’s the children of zoomers who will come of age in a time fundamentally unlike the mid-20th century, even as tomorrow’s venue is yesterday’s abandoned detritus. 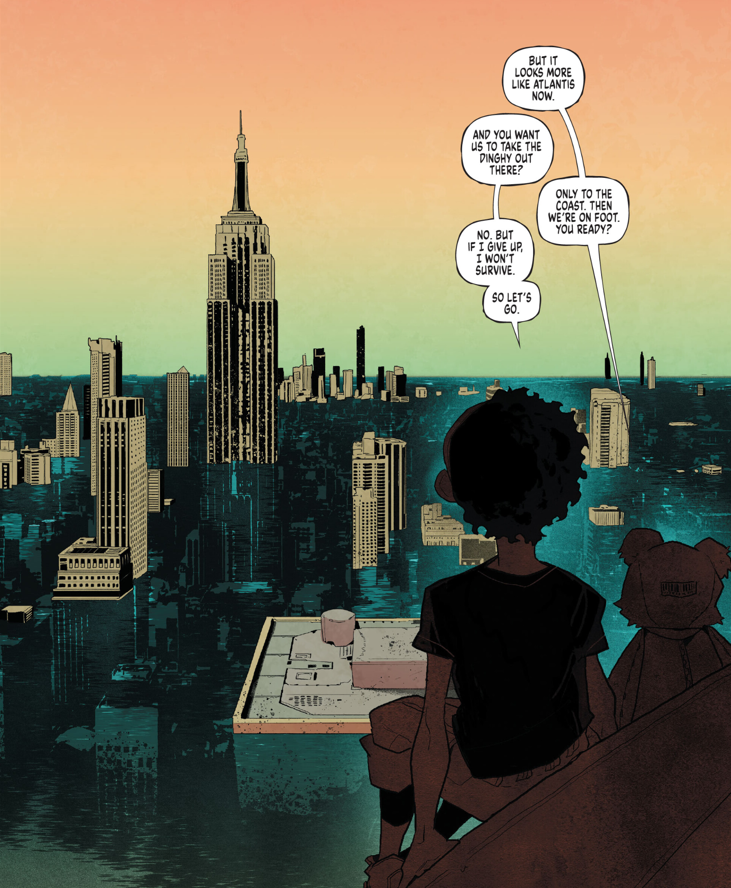 It’s a terrible burden to be placed on “the children”; older people have always done this, in one form or another even as it gets more unbearable with every generation. But perhaps unlike Gen Xers and millennials, and even zoomers, those kids of tomorrow won’t know so much resentment because they’ll have never known what you and I only thought was normal. After all, we’re still victims of magical thinking despite the fact that we’re not in the process of losing paradise; such a reality, if it ever existed, never survived the tainted touch of the modern West. It’s not polite to say that it really is well past time for the world to reboot, but it’s best to prepare now (and much too late to call it much too early without the children crying foul)—instead of waiting around for the abrupt rudeness of all our comorbidities shutting it all down for good.

But what is preparedness? Is it Eve’s father, reseeding the devastation with the wonders of biotech? Or is it Eve herself, less the visionary and project manager and more the steward of a future whose human footprint steps much more lightly? The question of how much hubris nature will tolerate will have to wait, but hopefully Victor LaValle will keep working out this most urgent of thought experiments with whatever, comics or prose, he puts his capacious and humane mind to next.

Closing out with a less ponderous note(!), Jo Mi-Gyeong’s illustration is perfect for Eve. Her pacing and layouts breathe beautifully, and the lack of clutter makes the postapocalyptic grittiness all the more striking, especially in contrast with the nimble expressiveness of her character work. The Korean wunderkind draws in the tradition of what in my American ignorance I can only call old-school manga (as in not whatever overly cartoonish and plastic Americanized version we got from white artists in the ’90s!). She’s best known for her illustration of two other BOOM! titles, Jim Henson’s The Dark Crystal and Beastlands, both secondary-world high fantasy.

And colorist Brittany Peer brings a lush palette to Eve’s otherwise somber world. The creative team is clearly not going for anything like grimdark here, and that is vital to the story’s message of un-naïve hope. Delightfully, she even shades Eve and her father’s palms a paler shade, which unfortunately I’ve never noticed anyone else doing for black characters in the comics—a small but important touch. She really brings so much subtlety and range to everything we find in these pages that it’s a critical reminder of how essential our colorists are, ever the unsung heroes of the medium.

Not that they have anything there on letterers! But Eve’s lettering, by Andworld Design, is also perfect. Again, it felt in the style of old-school manga, which gives it a homey, nostalgic feel to me. It was also just subtly/unobtrusively helpful in the frequent sequences where the lonely Eve talks to herself.