graphic novel, Beast Boy stars the fan-favorite Teen Titans member in a standalone setting where he has yet to discover his superpowers. Instead of worrying about the fate of the world, Beast Boy’s Garfield Logan is more concerned about putting on muscle and finally kissing the hottest girl in school.

is at its best when examining the very human issues that plague Gar as he races through his senior year. Bullied by the popular crowd, he often makes fun of himself before they get the chance to take the sting out of the situation. While his friends Tank, a track star struggling with his grades, and Stella, a video game streaming animal activist, both have talents and identities they feel comfortable in, while Gar is stuck as the short, skinny vegetarian kid who everyone picks on. It isn’t an incredibly unique dynamic, but it works and helps humanize Beast Boy’s hero for a YA audience. 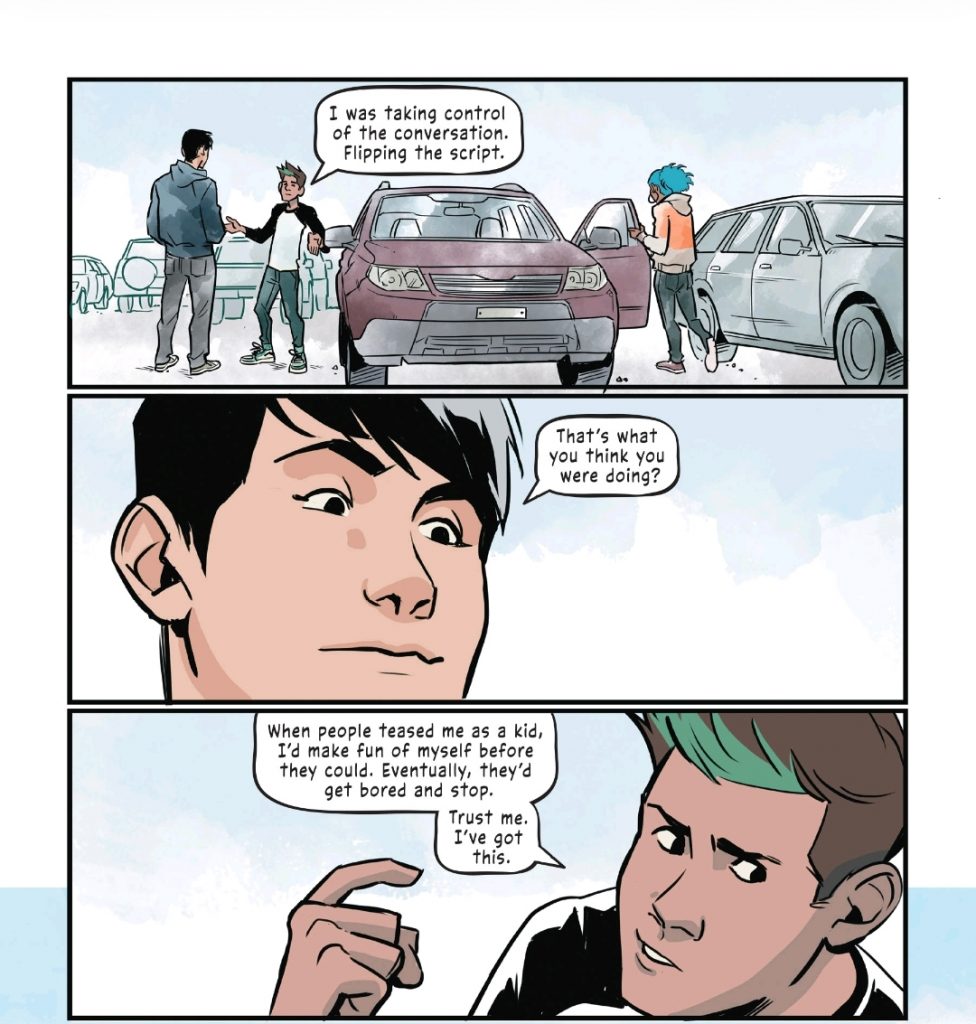 Throughout the title, Gar discovers his stunted growth is a side effect of a daily supplement prescribed by his physician parents. Once the medication is out of his system, he grows several inches overnight, develops muscles, and his already-voracious appetite gets even worse. Of course, these effects are due to his metahuman shapeshifting powers manifesting in the absence of the supplement that suppressed them. The learning-the-ropes power training that follows isn’t fresh or inventive, but charming and fun thanks to Gar’s upbeat personality and Picolo’s masterful expressions. Ultimately, these powers grant Gar the self-confidence and comfort in himself that he had been missing and start him on his heroic path.

If you’re not familiar with Beast Boy, he possesses the ability to change into any animal in the world. Due to the origin story nature of Beast Boy, Gar’s powers only flare up a few times throughout the title, but each one is entertaining and well-rendered. The first occasion is arguably the book’s artistic highlight, with Garfield’s body shown in a style reminiscent of a medical textbook. Organs and their various parts are labeled with their scientific names in a bit of stylistic flair that isn’t found anywhere else in Beast Boy. 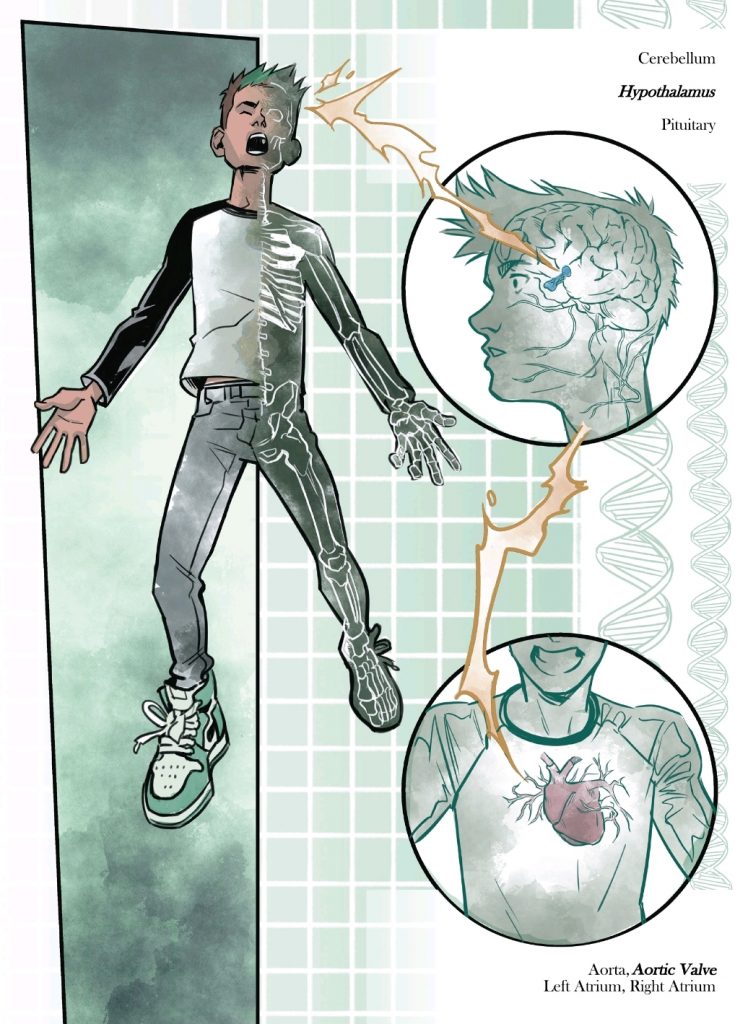 While that shift may not be present elsewhere in the title, the art itself is far from lacking. Gabriel Picolo’s artwork is expressive, clean, and incredibly modern. In an industry infamous for artists having a poor grasp of fashion, every teenager in Beast Boy feels like they could have walked in right off a high school campus. Given Picolo’s viral success with his Casual Teen Titans series of artwork, this shouldn’t be much of a surprise for fans. In contrast, David Calderon’s coloring is a delightful surprise. The book is an absolute beauty to behold, showing characters in solid, flat shades and backgrounds in cool dreamlike watercolors.

Unfortunately, Kami Garcia’s script doesn’t quite meet the high standard set by the art team. While not terrible by any means, Beast Boy’s dialogue can feel clunky and awkward in a way that YA work often does. Characters will outright state their feelings in sharp, sudden bursts, or have a single thought caption reinforcing their motivation that has already been established. While some of this is understandable due to the younger audience, other titles in DC’s own catalog (such as Gene Luen Yang and Gurihiru’s Superman Smashes The Klan

) have successfully accommodated that audience while maintaining a strong dialogue flow.

To the graphic novel’s credit, it does offer a more authentic take on teenagers than many comics featuring young heroes. Gar and most of the school’s students are obsessed with a TikTok star named RJ, who does Jackass-esque stunts for clicks. Stella has a thriving presence as a video game streamer, even if the dialogue regarding her streams feels a bit off. In one of the book’s highlights, in my opinion, when Tank is diagnosed with dyslexia, his friends support him. They are happy that he finally knows what has been making school difficult instead of mocking or belittling him for his condition.

One particular issue unique to Beast Boy is focusing on animal rights as a plot point. With both Gar and his friend Stella being vocal proponents of animal rights and the inclusion of everything from no-kill shelters to medical animal testing in the story, Beast Boy attempts to send a strong message to its young adult readers regarding the issue. However, this message becomes muddled when Stella requests that reward money she receives be donated to PETA, and again when a pack of coyotes attacks a crowd of teens partying at a bonfire.

Without diving too deep into the subject, PETA has a deeply problematic and well-documented history of mistreating and sometimes even killing animals to support their messages of “animal rights are human rights.” Likewise, coyotes are notoriously skittish animals who pose very little danger to humans and would never attack a large group of people celebrating around a bonfire. In another title, these mistakes would be barely worth noting. Still, given Beast Boy’s focus on animal welfare and the young adult audience, it is questionable at best to promote these kinds of dangerous messages and depictions of animals. 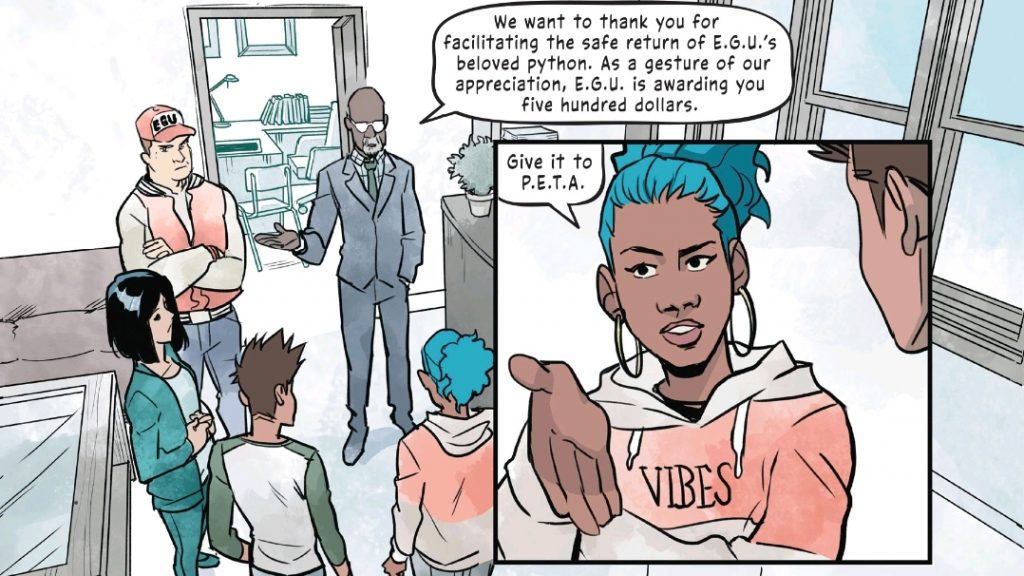 These problems aside, Beast Boy delivers a perfectly serviceable plot that doesn’t offer very many surprises but executes what it sets out to do. The biggest stumbling block it faces is its nature as being the second book in a series. With Teen Titans: Beast Boy Loves Raven

due out next year from the same creative team, the conclusion of Beast Boy feels a bit rushed and unsatisfying in service of setting Gar up for his role in the next installment. If you are invested in the series as a whole, this is less of an issue, but if you are looking for a complete Beast Boy tale, you will likely be disappointed.

Beast Boy isn’t a bad graphic novel. The art alone would keep it from that fate, but the script does just enough to keep its head above water as well. The story is messy and unsatisfying but peppered with charming moments and an ultimately likable and relatable lead hero. If you’re looking for a Young Adult graphic novel, for yourself or a child, and value outstanding art over a rock-solid story, you could do worse than Teen Titans: Beast Boy