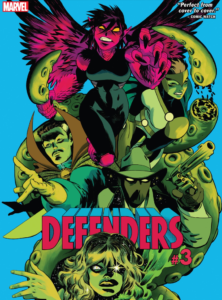 The latest iteration of Marvel’s Defenders

is writer Al Ewing’s clearest, most comprehensive love letter yet to classic Kirby comics as well as a masterfully composed culmination and recasting of cosmic Ewing ideas going back to what is still my favorite (non-X-related) Ewing run, Ultimates and Ultimates 2 (specifically drawing most from issues #6 and 100 of the latter title, though we also get a dash of his New Avengers #1-6 with Moridun, Dark Wizard of the Fifth Cosmos). Most immediately, however, the story here spins out of the Al Ewing-written portions of the massively oversized 2019 one-shots Marvel Comics #1000 and 1001, and the reader really should read or reread just those fragments to fully understand what the Masked Raider and Eternity Mask are all about*. (Fortunately, these comics are on Marvel Unlimited!)

Of course, artist extraordinaire Javier Rodriguez has always been riding that Kirby wave, most recently in 2019’s History of the Marvel Universe with Mark Waid and inker Álvaro López, his primary collaborator, when he’s not inking himself as here. He also collaborated once before with Ewing, in 2017’s Royals #8-12, which was definitely Kirby cosmic all the way. As often in the past, he’s also the colorist of Defenders, and color theory plays a surprisingly major role in this pretty darn complex allegory for the evolution of superhero comics.

END_OF_DOCUMENT_TOKEN_TO_BE_REPLACED

Depending on when and where you entered the Marvel Comics universe, there are essentially two very distinct Defenders units to consider. The first is the epic “non-team,” beginning with Namor, Doctor Strange, Silver Surfer, and Hulk, an Avengers-like collection of heroes who refuse to formalize the thing and hold roll call like a bunch of cubscouts.

There’s not much use fighting it anymore – Marvel’s Netflix and ABC TV output has hit a serious creative rut, and is frankly stuck in an unfamiliar realm of mediocrity. END_OF_DOCUMENT_TOKEN_TO_BE_REPLACED