The Sinister Six is a concept elegant in its simplicity. Take six of Spider-Man’s deadliest foes and team them up to accomplish what they’d previously failed to do individually: defeat that pesky wall-crawler. Of course, Spider-Man being Spider-Man, he usually finds a way to win. That doesn’t stop various incarnations of the Sinister Six from trying to make their fiendish “six on one” path to victory a success.

With Spider-Man: No Way Home arraying the MCU’s wall-crawler against the largest assemblage of cinematic villains yet, let’s take a look at the history of the Sinister Six as rendered across, yes, six notable incarnations of the team which have appeared in comics throughout the years. 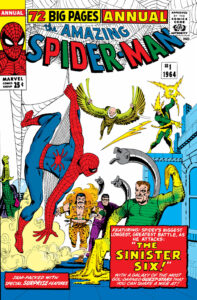 The very first Sinister Six made their debut in the first Amazing Spider-Man Annual, a Stan Lee/Steve Ditko joint which used the extra pages afforded the annual to tell a larger-than-life tale of Spidey facing down six of his deadliest foes. Organized by Doctor Octopus (already established at the time as the pre-eminent Spider-Man villain, one who would go on to be a frequent organizer of later Sinister Six incarnations), this inaugural Six was composed of Doc Ock, Kraven the Hunter, Mysterio, Electro, Sandman and Vulture.

With the showdown between Spider-Man and each member of the Sinister Six rendered in a series of gorgeous full page splashes by Ditko as Spidey fights desperately to rescue his kidnapped Aunt May, this story sets the template for many of the Sinister SIx stories to follow. While the Six have the numbers, their difficulties in working together collectively as a team allow Spider-Man to survive their onslaught. 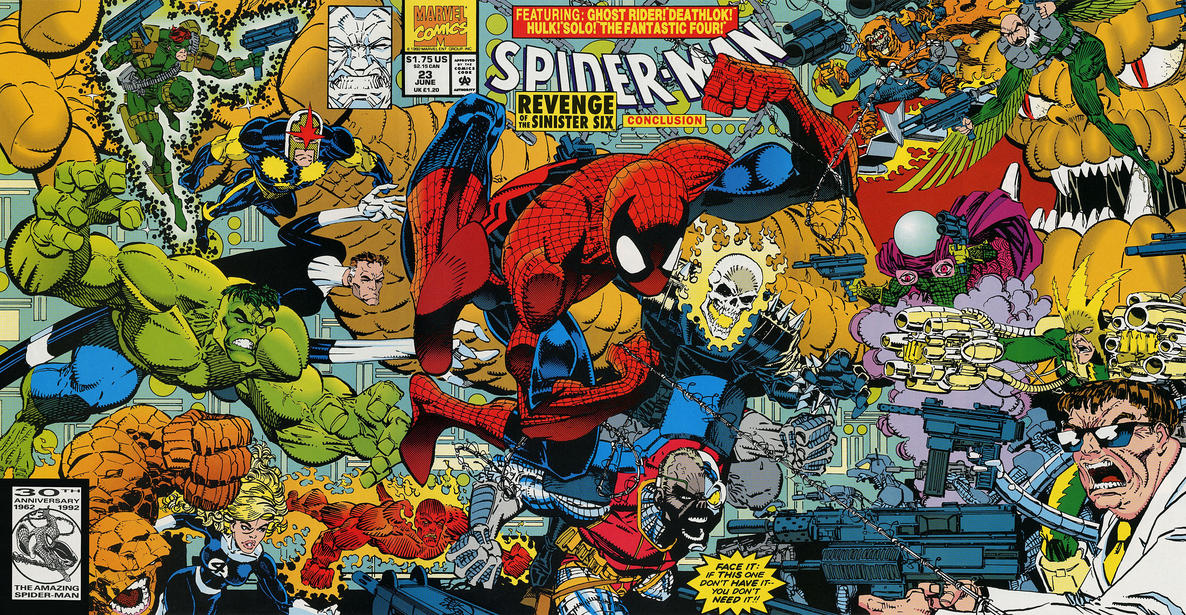 Writer/Artist Erik Larsen, who took over penciling duties on Amazing Spider-Man from superstar artist Todd McFarlane, contributed a pair of notable Sinister Six stories to the pantheon via “The Return of the Sinister Six” in Amazing Spider-Man #334-339 (with writer David Michelinie) and “Revenge of the Sinister Six” in Spider-Man #18-23. The first features Doctor Octopus reforming the original Six (with a demonic Hobgoblin filling in for the then-deceased Kraven the Hunter) as part of a larger plan for world domination (by Doc Ock, of course). The second involves the Six trying to get revenge on Ock before falling in line behind him once more and battling Spider-Man, who teams up with a wide array of the greatest/most popular heroes of the early 90s to defeat the Six.

These stories are notable for occurring during the brief time in which Sandman had reformed and was operating as a hero (even joining the Avengers for a time as a reserve member). As such, Doc Ock must coerce him into working alongside his former teammates, something that will become a recurring theme in later Six stories, with Sandman’s struggles to protect his family while staying on the right side of the law lending the stories some additional pathos.

The One with Venom 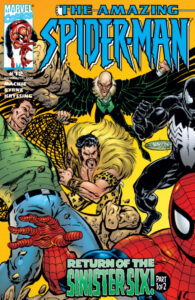 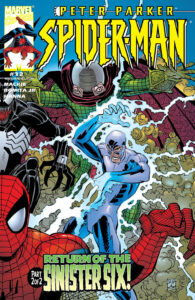 Venom, created by the aforementioned Todd McFarlane and David Michelinie, is certainly Spider-Man’s most popular villain, the star of a whole subset of comics and two Spider-Man-less feature films, and his popularity began almost immediately upon his full debut in 1988’s Amazing Spider-Man #300. But Venom in those early days was used sparingly, and it wasn’t until 1999 that this fan-favorite villain joined an iteration of the team whose whole deal is that they’re a Greatest Hits collection of Spider-Man villains.

Picking up where “Revenge of the Sinister Six” left off, “Another Return of the Sinister Six” in Amazing Spider-Man (vol. 2) #11 and Peter Parker: Spider-Man #12, features a returned-to-villainy Sandman assembling a roster of villains to get revenge once more on Doctor Octopus. Amongst their number are a new Mysterio, a new Kraven, and, for the first time, Venom. Part of the ill-fated turn-of-the-millennium Spider-Man revamp by superstar creator John Byrne, the story is drawn by Byrne and John Romita Jr., and is written by Howard Mackie; in addition to the notoriety of featuring Venom as a member of the Sinister Six, it is considered by some a rare not-terrible Howard Mackie story. 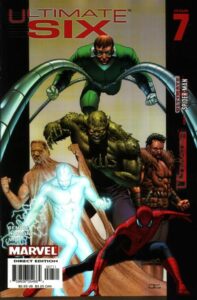 Launched in 2000, Marvel’s “Ultimate” line presented fresh starts for classic characters via new-reader-friendly updates starring in brand new series. Its take on the Avengers, the Ultimates, would inspire much of the look of the early MCU (including Samuel L. Jackon’s Nick Fury), but the flagship series of the line was Ultimate Spider-Man, which presented a modern spin on Peter Parker and many of his most famous villains. So, of course, it was only a matter of time before an “Ultimate Sinister Six” was introduced.

This came in the form of Ultimate Six, a miniseries crossover between Spider-Man and the Ultimates. Assembled by Norman Osborn (who had recently re-emerged in the “main” Spider-Man continuity as one of Spidey’s pre-eminent villains), the Six includes Ultimate versions of Osborn, Doctor Octopus, Sandman, Electro and Kraven the Hunter. The additional hook for this roster comes in the form of its sixth member: Spider-Man. Threatening the life of his aunt May to coerce his involvement (a nod to her role in the original Sinister Six story, and a return to the theme of one of the Six’s members being forced into the team-up), Spidey is forced to work alongside his greatest foes as they battle the Avengers of his world. 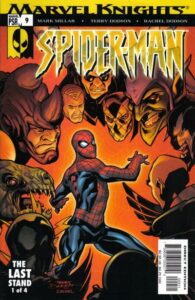 Another 2000s era imprint at Marvel was Marvel Knights, a sub-line of books that allowed marquee creators to tell stories that straddled the line between the all-ages sensibilities of Marvel’s “main” universe and the mature-themed Marvel Max imprint. Following the success of the Batman story “Hush”, in which the caped crusader ran a year-long gauntlet against his greatest foes, Marvel launched a Spider-Man series under the Marvel Knights banner with a twelve part story featuring many of Spidey’s greatest villains.

Written by Mark Millar (who co-created the Ultimates) with art by Terry and Rachel Dodson, the story riffs on “Hush” as Spider-Man faces an onslaught of foes organized by Norman Osborn into a super-sized Sinister Six, the Sinister Twelve. The story hits some familiar beats from previous Sinister Six stories: Spider-Man is briefly coerced into helping the villains when they kidnap Aunt May, and he later teams up with an assemblage of heroes to even the odds. But the real draw is the art from the Dodsons, and the sheer novelty of Spider-Man facing off against a double-sized Sinister Six. 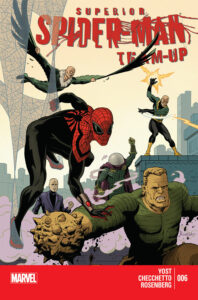 2012’s Amazing Spider-Man story “Dying Wish” concludes with the seeming death of Peter Parker, as Doctor Octopus’ consciousness takes over his body and he becomes the Superior Spider-Man. Half the fun in stories like that are in seeing how the new version of the old character handles the challenges that were previously routine, and sure enough, before long Superior Spider-Man finds himself battling a version of the Sinister Six, stopping short of killing one of them only when Peter Parker’s consciousness briefly asserts itself.

Later, Doc Ock (still operating as Spider-Man) plays around with the tropes of the Sinister Six, once again forming a team, but this time, he enlists every member against their will. One by one he battles his former teammates (or new versions of the same), eventually mind-controlling the group into working with him and passing themselves off as heroes, much as he was doing himself. Eventually, he loses control and has to battle his erstwhile allies, proving once again that no matter what, the core appeal of a good Sinister Six story is seeing how an overwhelmed Spider-Man is going to succeed when the odds are stacked against him.