You are here: Home / Comics Guides / Secret Wars Watch: Years of Future Past

Over the next few weeks, I’m going to be casting my eye to the teasers Marvel have released for their 2015 ‘Secret Wars‘ event.  The majority of these images are related to Marvel events of the past, and hint at realities colliding in the new Battleworld… First up: Years of Future Past! 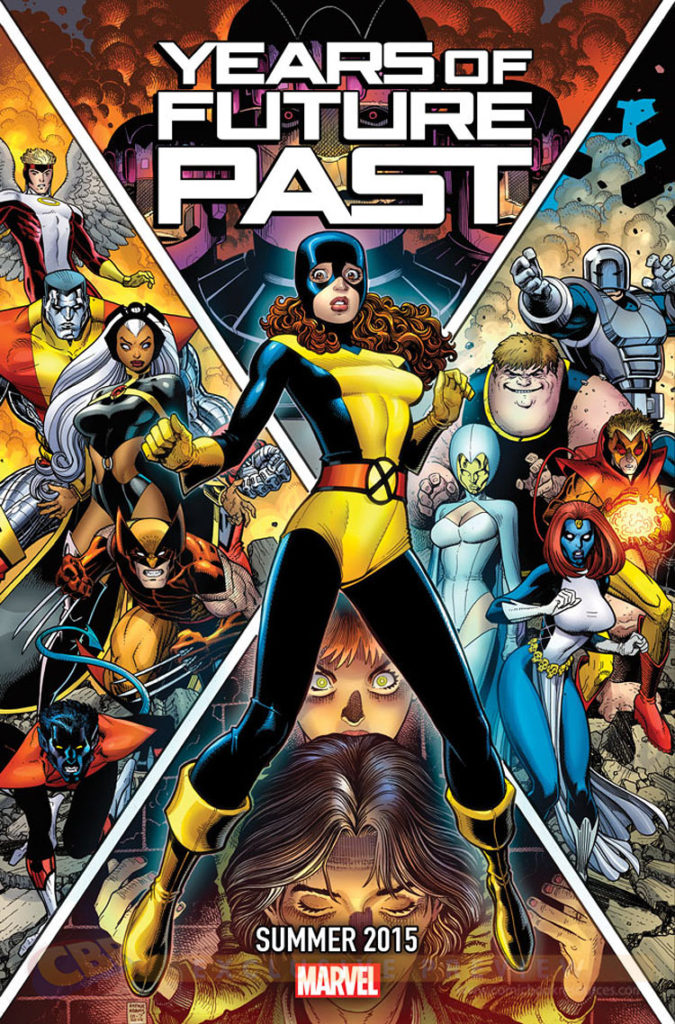 The classic X-Men story ‘Days of Future Past’ ran in ‘Uncanny X-Men #141-142’ – and it’s rather strange to realise that a story with such a massive impact on comic book history was simply a two-parter.  In it, we were introduced to a future reality in which the Sentinels had taken over the world, and the mutant and human races were brought to the brink.  It was a harsh dystopia in which we saw a handful of surviving X-Men launch a desperate plan to change the past – and Claremont and Byrne continually upped the ante, letting us see the future X-Men killed one by one.

Star of the show was a new cast member in the present day, the teenager Kitty Pryde, who had been added to the X-Men at the request of Editor Jim Shooter.  Shooter felt that the ‘school’ aspect of the X-Men had been undersold for some time, and Kitty was his proposed method for bringing it back.  And so Kitty was possessed by her future self, and the adult Kate Pryde dedicated herself to destroying her own timeline.

As the years have passed, miniseries have explored the ‘Days of Future Past’ timeline (although frequently filled with contradictions).  The longest-lasting impact, though, has to be the time-traveler Rachel Grey, who made her way from this dystopian future into the present day, becoming a long-running (and current) X-Men member.  Rachel, however, adds a layer of complexity to this; she is the daughter of Cyclops and Phoenix in her timeline, and her backstory requires that the timelines diverge before the death of Phoenix in the ‘Dark Phoenix Saga’.

This story is a fan-favourite, and it came as little surprise that Fox loosely tapped into the concept for a movie.

What does this add to the Secret Wars?

The teaser actually shows two realities, not just one: the present-day, with young Kitty Pryde, the X-Men, and the Brotherhood; and the future, with Sentinels, Rachel, and Kate Pryde.  It’s distinctly possible that ‘Secret Wars’ will, in fact, bring both parts into play.  The past of the X-Men contributes a significant player in blind seer Destiny, whose powers – in a world where time and space have collided – could be tremendously potent.

But the strapline ‘Years of Future Past’ suggests that the future is the timeline that we’ll see the most of.  In this crumbling world, Sentinels have taken over – a vast army of mechanical beings, dedicated to hunting down mutants and establishing their rule over humanity.  These Sentinels successfully defeated all the world’s heroes – yes, even Thor – and so should not be underestimated.

Even worse, the Sentinels included the powerful Nimrod class.  Although basic Nimrod units played a major role in ‘Second Coming’, the original Nimrods from this reality were an unbeatable force.  One Nimrod was only defeated when Rogue sacrificed herself, taking it into the Siege Perilous (and even then, it emerged as Bastion).  Worst-case scenario is that Battleworld is home to an army of Nimrods.

There won’t be many heroes.  Only Rachel and Kate survived the original arc – and Kate, at least, is a character who I expected Marvel to revisit.  But there will be villains aplenty.