In the flurry of adverts for ‘Secret Wars’, there’s one image that stands out… 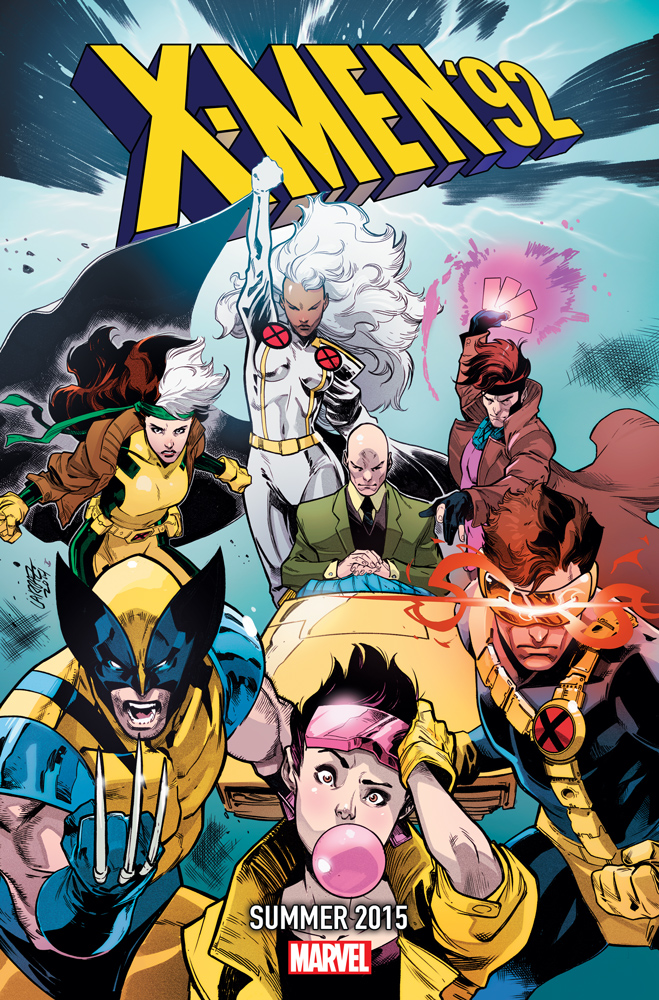 INTRODUCTION TO THE X-MEN ANIMATED SERIES

Debuting in October 1992, the classic ‘X-Men’ animated series was, for many long-standing fans, their introduction to Marvel’s merry mutants.  It featured a slimmed-down lineup, drawing classic characters from the Blue and Gold comic-book teams of the time, and was a critically acclaimed success.  In 2009, IGN ranked it as the 13th greatest animated show of all time!  Ron Wasserman’s distinctive theme-tune is even available on iTunes.

The majority of storylines were original, and even one major character – a shapeshifter called Morph – was created especially for the series; he was believed killed in the first episode, but returned as a sometimes-friend-sometimes-foe recurring character.  That being said, a number of plots were carried over from the comics – ‘Fatal Attractions’, ’Days of Future Past’, and, most notably, ‘The Dark Phoenix Saga’.

The major characters were handled with a degree of care, although some of their character traits were exaggerated somewhat; Storm, for example, became well-known for her monologues.  Only under Dave Cockrum’s pen would the comic-book character sound similar.

The series was bold and relevant for the time, with studies of prejudice, allegories of the AIDS epidemic, religion, and even using the character of Mojo to satirise television itself.

One IGN review puts it rather well:

Then there’s the socio-political and religious aspects of the comic, from the World War II metaphors to Christianity to gay-rights metaphors – every social issue that could be tackled is tackled in the X-Men series in some way.

Looking back, the X-Men cartoon isn’t perfect. It came right at the end of an era where cartoons lacked quality. Animation was cheap and studios didn’t enforce any style. Cartoons were banged out quickly, and animators were forced to be limited with their imagination.

But X-Men does hold a few visual tricks. It dared to break that mold (so did Batman: The Animated Series, which arrived the same year) and bring Saturday morning fodder into a more imaginative realm. And with it, all “kid’s entertainment” changed.

What does this add to ‘Secret Wars’?

Interestingly enough, ‘Spider-Verse’ has blazed the trail for drawing a historic animated series into Marvel’s multiversal continuity.  Already we’ve seen a tragic end for ‘Spider-Man and his Amazing Friends’, with all three members of that iconic team slaughtered by the Inheritors.  But in bringing the X-Men on board, and in such an apparently major way, Marvel are making a big statement.

Countless modern-day X-fans were introduced to the X-Men through this series.  To this day, many ‘hear’ Cyclops in the voice of Norm Spencer, Gambit in the voice of Chris Potter, or Rogue in the voice of Lenore Zann.  Only Hugh Jackman and Patrick Stewart have really caught the public imagination enough to replace Cathal Dodd and Cedric Smith in their respective parts.  X-fans are renowned for their nostalgia, and this is a straight pitch to catch their attention.

And, of course, we don’t know what the outcome of the ‘Secret Wars’ will be as regards this reality…

Want to understand the excitement?  Check out ‘Days of Future Past‘…