Marvel first made me care about Spider-Man 2099 back in December of 2012 when he was teased as a candidate to replace Peter Parker in the Superior Spider-Man series (And heads up – if you aren’t caught up with Superior Spider-Man, look out for spoilers ahead! ~ Doomsayin’ Dave). Although he wasn’t given the spotlight there, he was given several cameos throughout the series and now a book all his own.

Coming on to write this series is the man who created and originally wrote Miguel O’Hara (Spider-Man 2099) back in 1992, Peter David, along with an artist who draws sick buildings (more on that later) Will Sliney. They do this along will the evocative coloring of Antonio Fabela and the lettering talents of VC’s Joe Carmagna. 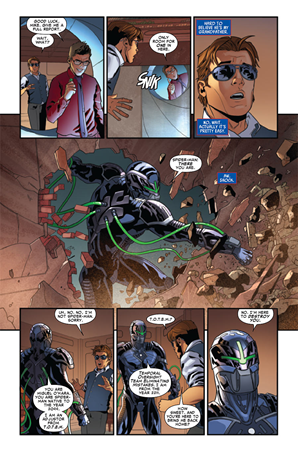 This issue begins right where the little preview in Amazing Spider-Man #1 left off, with Miguel adjusting to living in the present day. We also see the return of the spunky pink haired girl he saved (even if she didn’t want him to) in the preview mentioned above, and she appears to be a prospect for a recurring role and possibly a love interest.

Now to the meat and potatoes of the story (if you were wondering the meat is steak and the potatoes are au gratin), we see Miguel starting to finally adjust to living in the present day as he buys an apartment and continues his job working for his grandfather at the company which will become his greatest and most powerful enemy in his (future) timeline. The main antagonist here is a robot from 2211, sent to eliminate Miguel before he messes up the Marvel time stream even more that it already has been lately (apparently that’s still possible).

The Creators- They Made It Happen

As I said earlier the writing here is done by Marvel Comics mainstay Peter David and, well, I cannot say that this is his best work by any stretch of the imagination. I can say that as far as first issues go this one doesn’t disappoint. The pacing throughout this issue is rather well done and I feel that addressing the elephant in the room right off the bat – that Miguel being in the present might screw up space and time – was a smart way of opening up a comic with a time displaced main character. It also shows us that we might see the return to the future that many longtime fans are asking for.

Aside from two stand-out moments, I find Miggy (Miguel) a little boring and slightly uninteresting as someone with no previous investment in the character. The other problem that I have is the fact that David didn’t really give me an answer as to why I really need another Spider-Man book or what’s different about this one. This is something I feel is much needed with another good Spider-Man book on the shelves.

The art throughout this book done by Will Sliney was pretty good overall but it was nothing that I hadn’t seen before. His action sequences were a personal highlight but the use of heavy shading throughout the book looked a little off and took me out of the story now and again.

Conclusion- Should I Buy It?

Now if you’re not quite sold on the book yet don’t worry because I saved the best for last (drumroll in your heads please): the buildings. But seriously, the buildings. I don’t know if I’ve just never noticed background buildings before but, these look delectable. So if you have ever wanted a book with incredible buildings, and I think we’ve all been there, then pick this one up. 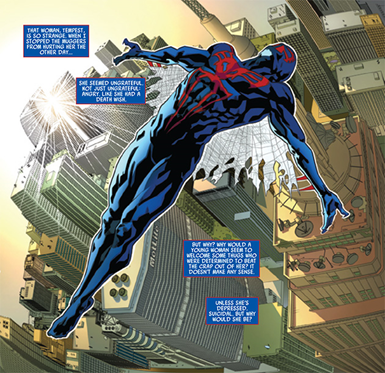 All in all, a pretty okay first issue, as most first issues are. Nonetheless, with a quality writer at the helm and some beautiful buildings behind it all, this might end up being one of the best Marvel books by the end of this first arc. Sadly in this issue I just didn’t get quite enough to put it up there. So I’d definitely pick this one up if you liked what you saw in Superior Spider-Man and want a little more.

So it’s a new Spider-Man book with a decent start, that’s still yet to hook me and give me a reason to come along for the ride. Although it could pan out in the long run with some solid creators, I wouldn’t go all in on this one until we see a little more.