You are here: Home / Reviews / Casanova Comics Volume One: Good, Bad, Or Ugly?

Take James Bond. Do it. Just grab him by the neatly pressed suit jacket and make him have a baby with Han Solo. Make them have that baby.

Now take the baby and soak it in the acid-drenched residue of Lucy in the Sky With Diamonds. Soak the baby. Be careful, it’s a baby.

Now, if you would, promptly raise this man-child baby into a Super-Space-Spy where time travel is a reality. Good. We are now looking into the essence of Casanova Quinn. And damn is it interesting. 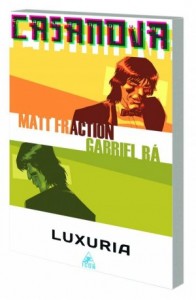 Who Needs It?: Anyone who likes arguing that comics can be smart. Fans of modern psychedelia. Those who find humor in subtle jabs at overused comic book tropes.

So a Casanova Walks Into a Bar…

To clear the air immediately, a Casanova is any man who frequently partakes in amorous adventures. A rake. A playa’. A mac daddy MC.  A stud muffin 3000.

As you might expect with a character named Casanova, he is every bit the suave, supercool spy. Dude even kind of looks like Mick Jagger after a werewolf bite.

Writer Matt Fraction (previously seen writing just about everything for Marvel, including the recent Fear Itself as well as The Immortal Iron Fist) takes this stylish and fearless spy and throws him into a universe run rampant with comic book fodder. Over the course of Volume 1, Casanova faces corrupt space aliens, sexy robots gone wild, his father’s fully acroynmized spy organization (E.M.P.I.R.E), and a terrorist manipulating the timestream for his own “crossover event.”

And The Bartender Says You Better Put Down the Mirror Next Time!

And it’s there that we have the most exciting, refreshing component of Casanova: Fraction’s willingness to laugh in the face of the comic book industry with guns blazing. Throughout his warped and magnetic science fiction, Fraction takes the time to offer “secret” insights into the minds of certain characters through internal dialogue panels.

The best example of this is when Fraction bypasses the traditional “editor’s note” of comics in favor of a note from “God, Creator of All Things.” Of course, in the case of Casanova Fraction is God, and it’s a role he’s perfectly comfortable embracing. He knows this world inside and out. He created all things, after all.

At the end of the day, this is what makes Casanova worth your time. Fraction is clearly invested in this world and it shows. Sometimes the details of the world are a little too clear to the creator, leaving us as readers confused as a cow dining at Chipotle. But the full immersion into this crazy world of Casanova’s gives the comics a rare quality among the genre: re-readability. It’s almost required here to grasp the nuances and turns of the book.

Given Fraction’s powerful manipulation of genre, it only makes sense that he would surpass the medium altogether. Combine these stylistic decisions with quality story-telling involving demigods, foreign intellects, and an economy powered by sex, and you’ve  got yourself a comic book worth the money.