You are here: Home / Columns / Opinion / Previously On #92: Why I Love Superhero Comics

A scathing Alan Moore quote from a few years back blew up recently (thanks @Kylepinion!), and its incisive fury is clearly getting under a lot of people’s skin, from comic creators to critics to fans. Moore – a creator I still have ranked as my favorite comic book writer of all time – manages to call adults into superheroes (and I’m paraphrasing with my tongue lodged somewhere in the middle of my cheek) racist babies. 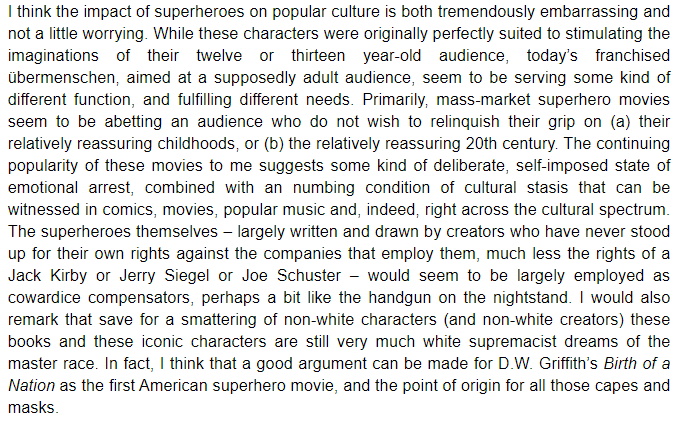 Every time this sentiment or something similar hits the cultural consciousness, I begin to contemplate one major question, but rarely take the time to articulate my thoughts. It’s a question I regularly wrestle with, and want to begin to define, if only to begin to clarify my own obsession: Why do I love superhero comic books so much?

I’ll start with Moore’s first thought because it’s the one I worry about the most.

Over the course of my early twenties, as I got back into superhero comics, I felt no shortage of embarrassment actually speaking this love out loud. I distinctly remember the wry smiles from family, the genuine surprise from a friend at a Cubs game (“Comic books? Really?!“), and the wholly secret fandom I kept from anyone at work.

Of course, at home, and as I started Comic Book Herald, I couldn’t get enough of comic book superheroes. I wanted to know everything that had happened in Spider-Man, well, ever. I was completely fascinated by the allure of Marvel’s House of M or the much discussed Civil War. I wasn’t just curious, I was obsessed with exploring and navigating these universes I thought I knew but had never actually traversed before. Looking back, I can barely begin to describe the excitement I felt researching the Marvel Knights era of Marvel and plotting out a reading path through the modern era of Marvel.

Eventually, that passion built up to the Marvel Reading Order on Comic Book Herald, but if you had asked me about comics at the time I’d be more likely to admit to reading more literary fare like a Watchmen, Sandman, or Maus than I would the Waid and Wieringo run of Fantastic Four. I’d need a few rounds of therapy (or at least a couple drinks) to get to all the root causes here, but in general I think my fear was what Moore asserts about targeted audience: Isn’t Spider-Man for kids?

Inevitably, at my least confident, I’m awash in feelings of guilt and anxiety over this perception of infantile regression. So when Alan Moore steps up to the plate and talks about “relatively reassuring childhood,” I’m relatively certain there’s a part of me shamefully in agreement.

The wildest thing about Alan Moore’s views casting my own into doubt is that Moore himself is a huge reason I love comics – in all their glory – as much as I do.

And it’s clear that Alan Moore did (maybe does) too! There’s a really great thread from Leah Moore (Alan’s daughter) that reflects this quite poignantly. From my substantially less connected experience, the love is right there in the work. It’s in the way Moore inverts the Captain Marvel comics of his youth, the way he earnestly embodies a comics historian dissecting Tales of the Black Freighter, and the way he lovingly recreates Jack, Stan, and Steve’s Marvel origins in 1963.

A vast majority of Moore’s best work is beloved at least in part as commentary and modernization of established superhero mythos.

The evening after I wrote the preceding melancholic reaction of my own reservations, I found myself with a night full of the most media I’ve consumed in approximately three years (my son’s nearly that old, why do you ask?). I finished the back half of an episode of Mindhunter, watched the second episode of The Mandalorian, watched the last episode of Glow season three with my wife, and read the last two chapter’s in N.K. Jemesin’s The Fifth Season.

Was this all arrested escapism? To a degree there’s certainly some of that, but during The Mandalorian in particular, I was struck by the artistry and heart of the latest from the Star Wars universe.

Certainly if anything in pop culture rivals superhero movies eager exploitation of childhood nostalgia, it’s Star Wars. And yet, there I sat, taking in the silences of Pedro Pascal, the adoration of Baby Yoda, and event the childlike exhilaration of those pesky Jawas. I was reminded there’s opportunity for compelling and evocative art in any story, it really just depends on the telling.

I’m a lot more confident now talking about Comic Book Herald and my fandom in general. Even this, though, gets to a big part of my fandom: I like what I’ve built! I’m proud of the success of Comic Book Herald, the millions of pageviews per year, and the financial component it affords my family. Still, even now, I’m more comfortable talking about the business success of CBH with a co-worker than I am all the reasons I think the first issue of Absolute Carnage is one of the best opening event issues I’ve ever read.

I suppose part of that is still just that on average, I don’t run into a lot of people in real life who consume the medium like Galactus after a fasting retreat. Marvel becoming the biggest name in movies has made these casual conversations way more normal, but I still downplay my love by keeping every conversation to an absolute maximum of one “Well, there’s this story in the comics…”.

But if anybody asks me how Comic Book Herald is doing, I can go for hours. I’ll tell you about my latest forays into Youtube, podcasting, the CBH site analytics, and whatever new Press Release is making me laugh.

All of this is something I quote-on-quote love about comics, but I know it’s deflecting. It’s superhero adjacent.

After all, I didn’t swoon over Absolute Carnage #1 because I have to track it in a reading order. (Although, yeah, I really love that part!)

So yes, there’s the ritual satisfaction from organizing continuity chaos, and the joys of growing some small semblance of an online business through my passion and my writing, but there’s also the comic books. As Grant Morrison writes in Flex Mentallo “All those shitty, amazing comics.” 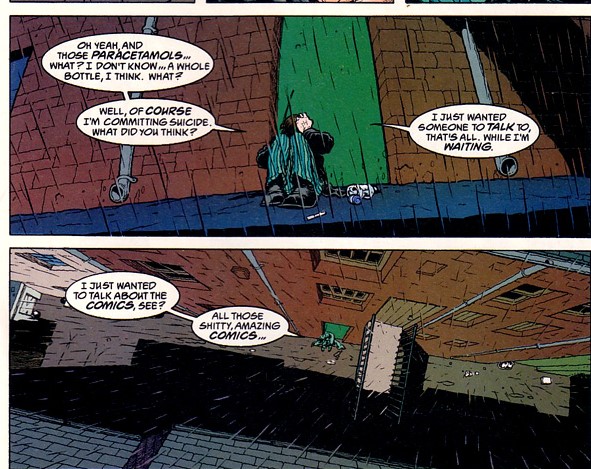 Now, I know it’s ok to just like things. I know more self-assured individuals would say things like “If you like it, then who cares?” And the reality is, while knowing this, I cannot shake the insecurity. I doubt I ever will, not totally.

Given that, it helps me to define the enjoyment and ways comic books can give meaning. As the Flex Mentallo quote above so exquisitely summarizes, there are a lot of bad comic books in the world. I’ve read many of them!

The highpoints are always worth combing the mundane, though.

It’s the way Immortal Hulk has me questioning humanity’s moral relationship to ecology and corporations.

It’s the way X-Men has me thinking about the never ending depths of man’s hate and what we can do to break free.

It’s even the way Spider-Man is always – always – a reminder to get back backup and keep pushing, if not for myself, than for others. Especially for others.

It’s art! And I dig through all the waste because every so often it’s rewarding, thought provoking, and frames a mythology and compass of what matters to me.

You know who was among the first to teach me the genre had that potential? Alan Moore!