This week on “Previously On,” I’m looking at Excalibur #1, the latest entry in 2019’s “Dawn of X,” exploring the history of the title at Marvel and the new vision Tini Howard and Marcus To have for the title moving forward.

If you’re thinking about Excalibur, here are the elements that typically matter:

Excalibur officially kicked off as a title with a 1988 “Special Edition” (otherwise known as The Sword is Drawn), with the creative team of Chris Claremont and Alan Davis. The comic book spins out of Uncanny X-Men with a lineup of Nightcrawler, Kitty Pryde, Rachel Summers (Phoenix), and Captain Britain and Meggan.

Throughout the original run that spans 1988 to 1998 and over 125 issues, there are effectively two tonal approaches:

In many ways Excalibur is also Claremont and Davis’ approach to bringing the Captain Britain mythos they established firmly into the world of Marvel and the X-Men.

Way back in 1978’s Marvel Team-Up #65 / #66 (which we’re currently tackling in the My Marvelous Year reading club!) Chris Claremont and John Byrne actually brought Brian Braddock aka Captain Britain over to American audiences for the first time. The character bounced around his own in Marvel UK mags including “Captain Britain” and “Super Spider-Man and Captain Britain!” among others, before notably ending up in the hands of the up and coming Alan Moore and Alan Davis.

In the process of bringing Brian Braddock back into his care, Claremont also brings Betsy Braddock more firmly into the world of the X-Men, where she has remained to date. It’s actually in the pages of New Mutants Annual #2 by Claremont and Alan Davis that Betsy’s somewhat recent eye-removal in the pages of “Captain Britain” is, um, fixed by Mojo! From there Betsy would remain with the Uncanny X-Men until her famous transformation during the “Acts of Vengeance” crossover into the body swap with a Japanese assassin named Kwannon that made her Marvel’s Psylocke.

It’s also worth noting here that there’s a *third* Braddock sibling, the omega level reality warping Jamie Braddock. Jamie’s the black sheep of the family, very much in keeping with the tradition of Legion or Scarlet Witch, remarkably powerful players with familial ties to the group and flimsy mental stability at the best of times.

Another consistent piece of Excalibur is the location “Otherworld,” the realm that’s home to the Captain Britain Corps of all realities in the Omniverse (I had trouble w/ this one, but from what I’ve gathered, Omniverse is a collection of Multiverses taken together as a whole). This is an idyllic “Sword & Sorcery” England, home to the likes of Merylyn, Roma, Camelot and Arthur Pendragon. To my mind this is the Alan’s greatest contribution to the mythos, a very “Morrison’s Multiversity” approach to Britain’s protectors well before those comics.

Technically there hasn’t been an ongoing Excalibur title at Marvel since 2007, although even that’s misleading when you factor in the very fun and underrated Captain Britain and Mi13

series that launched out of Secret Invasion and Dark Reign.

For my money, the most entertaining continuations of the major players have continued in some of the 2010’s best Marvel books.

Pre-House of X and Powers of X also saw a couple major developments for the Braddocks.

First, via the X-Men Gold Annual (co-written by Leah Williams), Brian and Meggan had a baby! And also the baby’s preposterously smart, even rivaling the likes of Valeria Richards in terms of uncomfortably rapid child development. I’ll admit I didn’t necessarily expect this bit of continuity to make it through to Excalibur, but low and behold, it does!

Most controversially, Betsy also returned to her original “Betsy Braddock” body (aka white Englishwoman) freeing Kwannon (Japanese woman) back up to apparently star in Fallen Angels. This happened in the pages of Hunt for Wolverine: Mystery in Madripoor

, and if you’re considering reading the “Hunt for Wolverine” debacle rather than proceeding directly into House and Dawn of X, I beseech thee to reconsider! 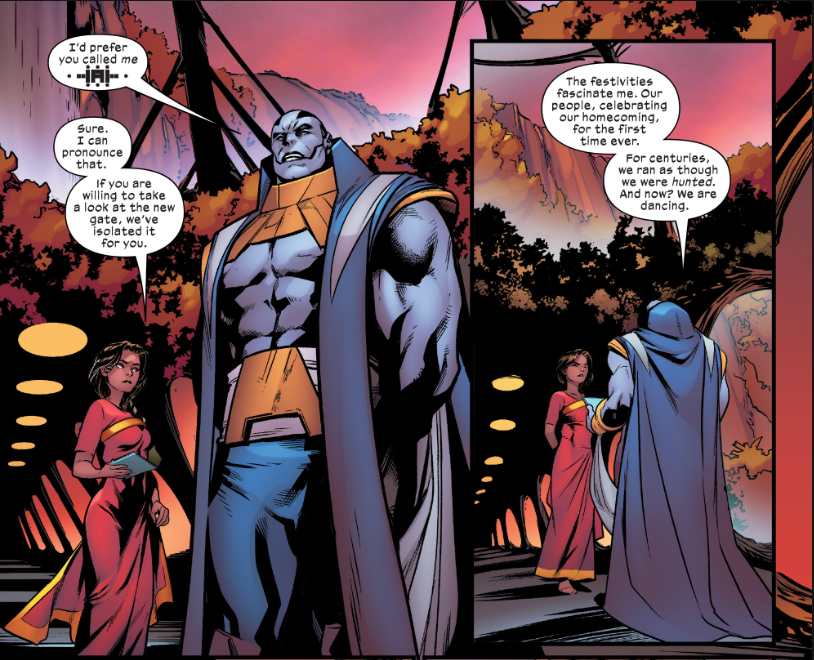 Excalibur #1 in Dawn of X

So let’s get to it, then. How does Excalibur fit? What’s the hook?

+ Tackling the world of magic. High fantasy and the X-Men’s D&D playground has long been at the center of Otherworld, but Howard and To are doubling down on the witchcraft and sorcery. This is a world where the Queen of Otherworld is Morgan Le Fay and the flowers of Krakoa are messing with the magic of Avalon.

+ Gates from Krakoa can lead to other dimensions. This is tremendously exciting to me, as it opens so many doors (puns!) for the future of this series. Especially since Apocalypse is the one asking “In what othe realms could we build a home? And what would it cost?”

+ This is *the* Apocalypse book, and he is not the Apocalypse we’ve known! The first data page opens with this incredible line: “As Apocalypse introduced himself to his fellow sorcerers…” and I swear I did a triple take.

+ This is the Braddocks book, and they, well, they *are* still kinda the Braddocks we’ve known. At least if you know your history! Goldballs (now comically trying to rebrand as “Egg”… or is it Ann?) takes Bets to a rehatched Jamie Braddock, doing filthy things in his egg (lol). I love how Excalibur begins digging into some of the discomfort of everyone resurrected on Krakoa, with Betsy awkwardly eyeing Kwannon before winding up in the infuriating presence of brother Jamie.

By issue’s end we also get the transformation of Betsy Braddock to the new Captain Britain, which is a mantle she’s worn before. Although I expect this round should go better for her!

Is Apocalypse a wizard now?

I mean… yes. He’s communing with sorcerers, raising toasts to the history of magic, and apparently Clan Akkaba (or a sect thereof) are dedicated covens.

This one’s definitely a lot to take in because it doesn’t quite fit the picture of Apocalypse I have from a lifetime loving Age of Apocalypse and X-Men the Animated Series. As House of X #5 made clear, though, this is a new phase for En Sabah Nur, or however us mere humans can translate the dope “A” symbol he insists everyone call him.

The challenge for Howard, To, and anyone utilizing the character now is that his “survival of the fittest” shtick is a bit tired and beside the point in Krakoa. Apocalypse even says as much in this issue, instead focusing his efforts on mutant-expansion to new realities and magical realms.

It’s an intriguing fit for “The First Mutant,” and some revisionist history that I can see working very well. There’s a ton we don’t know about this character who spans centuries, so sure, let’s mix magic into that mix and see where it takes us!

Who is the White Witch?

My first thought here was Emma Frost, the once and future White Queen, but that’s probably just a function of Marauders and the Hellfire Club still riding around inside my head.

The more likely answer is that Morgan Le Fey’s “white witch” is none other than Saturnyne, the longtime Omniversal Majestrix of Otherworld. I’d be pretty surprised if this wasn’t the answer, which is a good thing in my book. Saturnyne typically means wild Captain Britain Corps adventures across reality!

Does a single word choice in a data page mean Tini Howard is setting up the coolest cosmic crossover ever?!

Probably not, but I’ll be gosh-darned if I don’t pitch the theory anyway.

The final data page in Excalibur #1 lingers on the word “magus”. Here’s the full line:

Hail the defenders of the magic of Avalon.

Slay the pretenders who need not the humility of the magus.

As stated in Coven Akkaba’s “Invocation of the Gods,” the line is in reference to a curse being placed on mutants attempting to wield the magic of Otherworld (at least that’s how I interpret it). And yes, “magus” in this context effectively just means sorcerer.

But, what if, hot on the heels of Howard’s own work writing Jim Starlin’s Magus in the pages of her Thanos mini, she can find a way to weave Adam Warlock’s (more magic references!) evil doppelganger into the fabric of Excalibur?

Hey, it’s not likely but it’s not a zero percent possibility, and that’s reason enough to get excited!!