You are here: Home / Featured / Previously On #83: My Marvel Subscriptions Experience!

In early May 2019, I saw an e-mail announcing Marvel was offering 40% off print subscriptions to Valkyrie: Jane Foster, the post War of the Realms comic by Jason Aaron, Al Ewing, and Cafu. Since I was already on the fence about adding the series to the pull list at my local comic book shop, I decided to take a chance on the savings and try Marvel subscriptions (in part so I could review the experience here on CBH!).

My subscription is for twelve issues, and a total of $28.96, including delivery straight to my door. At the full standard $3.99 price point, the series would run me $47.88 (or at my LCS with my pull list discount, $43.09 – either way, clear savings!). I expected some possible wear and tear on issues, and seriously doubted same day receipt, but otherwise expected I’d get my issues of Valkyrie with relative convenience, even if I wasn’t actively looking for a way to replace weekly trips to the comic book shop (most weeks I am actively looking for new reasons to go!).

My primary curiosity was around the value. If readers could easily get these clear savings using Marvel Subscriptions, why wouldn’t more Marvel readers collect their books this way?

So far, based on my experience, the answers are pretty obvious!

The single biggest problem I have with Marvel print subscriptions to date is the inability to actually send me any comics. The books aren’t just late; they barely come at all. I’ve genuinely been doubting I’d ever get a comic this way from July 26, 2019 (the day Valkyrie #1 was released in print) and September 8, 2019. Finally, on Monday September 9, my first issue of Valkyrie came in the mail.

That’s a one month and two week delay, and one Wednesday away from the release of Valkyrie #3.

The most annoying part of this delay was the complete lack of communication, and utter confusion I felt when no comics showed up. Every attempt to connect to Midtown Comics (the distribution center for Marvel) resulted in crickets. Oddly enough, I’ve ordered comics on my own from Midtown before, and had very good experiences! But for some reason, my attempt to subscribe to a new series took a backseat to anything else they all had prioritized.

For those reasons alone, I’d argue against the service for anyone curious. But for those who don’t mind such delays and customer service, my copy of Valkyrie: Jane Foster #1 actually showed up in pretty decent shape! 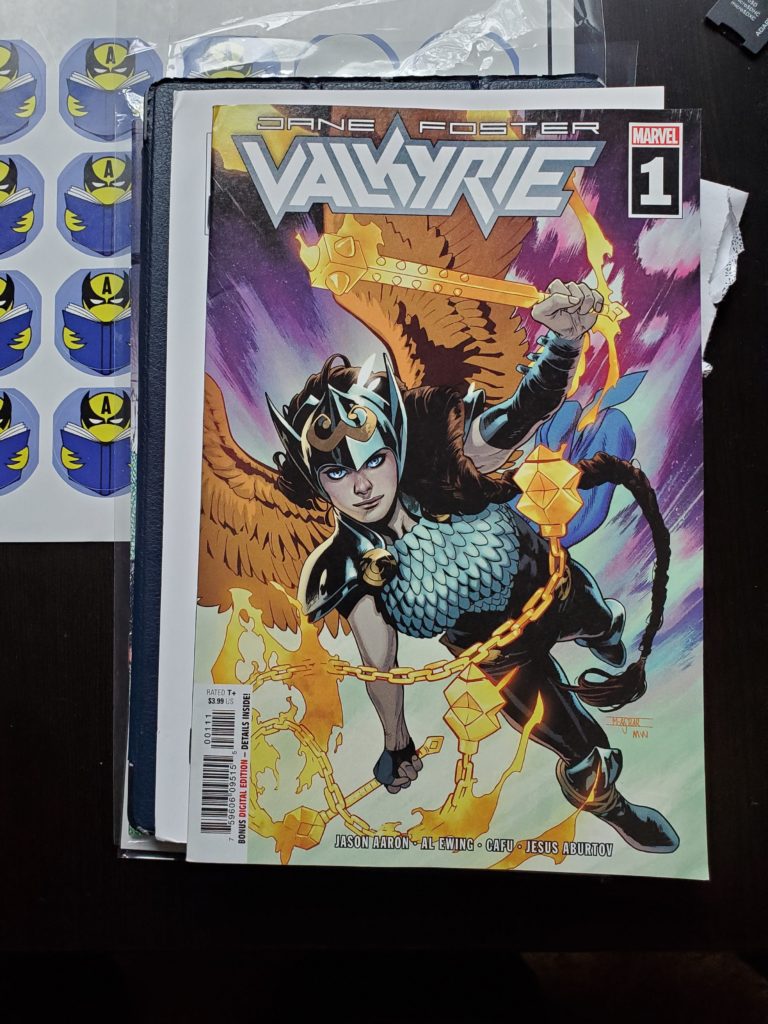 There’s a light bend on the upper left corner of the issue, so collector market beware, but given the issue shipped in a light plastic bag with only a simple paper “board” for protection, this seems just fine.

In truth, if I had received even a basic level of communication (“Your issue has shipped, expect it during these days!”), I’d probably be way more lenient towards Marvel Subscriptions. Especially for comic book fans who don’t live my convenient 10 minute drive from a comic book shop (you better believe I’ve been eyeing houses within 5 minutes walking distance!), a discounted mail-order subscription offering could make a lot of sense!

Given the lengthy delay, and bottom of the barrel customer service (to be fair, never replying means you can’t give a bad reply!), I’d avoid Marvel Subscriptions for the time being, and just use any combination of Marvel Unlimited, Comixology, or of course, good old fashioned trips to the LCS.