You are here: Home / Featured / Previously On #79: How I Fell In Love With Comics In Chronological Order (Ages 0 to 18), and Loving The Green Lantern Annotations

This week on “Previously On,” I reflect back on all the touchstones that helped shaped me into a lifelong comics fan, and reveal that 99% of them were not actual comics. Oh, and I celebrate the value of reading The Green Lantern with annotations!

How I fell in love with Marvel Comics from ages 0-18, in chronological order:

I couldn’t pinpoint the exact influence my Dad had on me as a comics fan other than the process of osmosis that happens when your parent is also a fan. Dad wasn’t an avid collector or anything, although (allegedly) he grew up with his brother’s Silver Age Marvel collection (I say allegedly because the issues were lost to a flood… hang on, I just need a second to compose myself).

In retrospect, though, all the media that I consumed ad nauseum below was probably via his direction or approval, and certainly as I got older this became more of an identified shared experience.

From Juggernaut vs. Colossus to Nightcrawler clowning the Blob to Wolverine’s jaw-dropping Australian accent (this is years before Hugh Jackman… how prescient?), there are loads of moments I’ll never forget. You couldn’t convince me this movie doesn’t deserve a lifetime of Oscars if you tried. 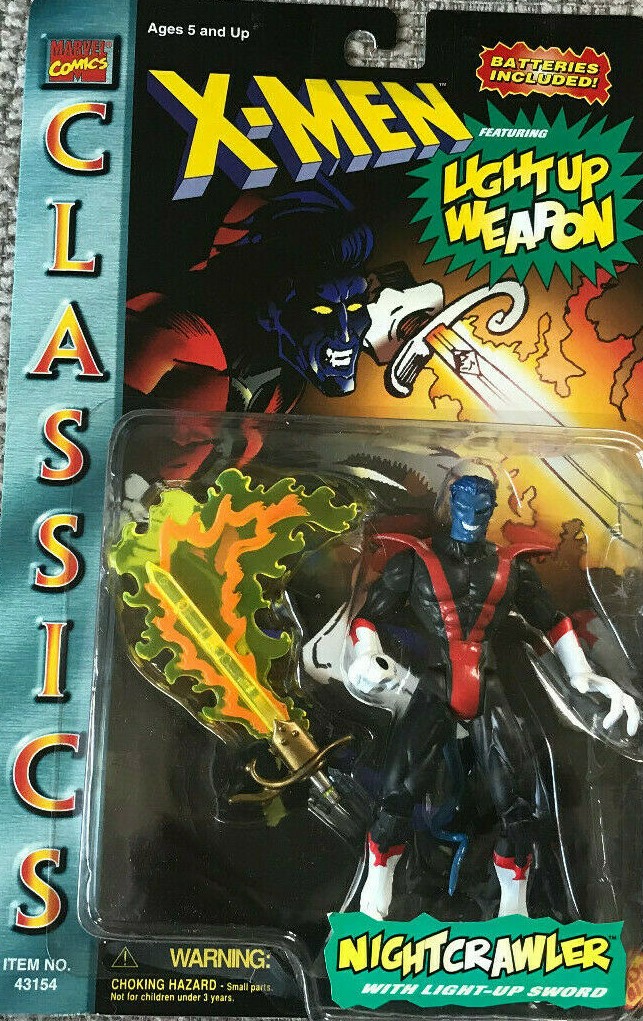 Why was Nightcrawler’s sword on fire? I don’t know, and I don’t need to know. This was the coolest toy in my entire arsenal, and literally every plot ended with Kurt teleporting into a castle and running that senseless fire hazard through the heart of some ne’er-do-well.

One time my friend’s mom let us stay at the arcade and keep getting quarters until we made it to Magneto, and it remains a top 5 moment of life, somewhere alongside my wedding, baby being born, and that time I dunked a tennis ball with the Ghostbuster’s theme blasting in the background.

They released the game on Xbox 360 this decade, and let me just say sometimes there are strong arguments to be made for letting the past (welcome to) die, kill it if you have to.

I’m significantly less confident this one holds up like X-Men TAS, but man I loved it at the time. I still sing the theme song to my baby, complete with mimicked epic guitar solos.

The Stan Lee introductions in particular. This was my introduction to Lee (from what I remember he also did intros for the Iron Man animated series, but boy does that not hold up) and the Fantastic Four. Supremely underrated.

I sat front row with a bunch of friends and have neck problems to this day, but man was worth it. I knew I liked Spidey from the animated series, but didn’t yet have any of the comics obsession to compare to Tobey’s rendition, meaning I could just enjoy the story for the high quality take that it is.

I distinctly remember watching this series on Cartoon Network late at night with my Dad, and starting to think “oh man, I used to love this stuff.”

John Stewart will always be my favorite Green Lantern because of this show.

My Mom took me to the theater on a flippin’ school night to see the sequel to movie X-Men (which I think I was voted “too young” to see in theaters by my parents), which remains one of her greatest feats of mothering.

Staring at my Gamecube, staying up all night.

I maintain the original Ultimate Alliance is one of the best Marvel event stories ever told.

(1984) may not actually have been the first comics I started reading when I finally dove in (the honor could also conceivably go to the Essential Spider-Man collections I found while producing a college radio show), but it definitely holds a firm place in my heart.

Amazingly, Secret Wars pairs nicely with Ultimate Alliance, delivering the power-hungry and implacable Doctor Doom at his best. Pretty soon I’d be reading any comic I could get my hands on, but I’ll always celebrate the joy of the original Secret Wars.

John and I recorded a deep dive on the Grant Morrison and Liam Sharp run on The Green Lantern recently (look for it on Best Comics Ever and the CBH Youtube channel!), and in the process of researching the book I found some absolutely incredible analysis.

The work Ritesh Babu is doing over on Adventures in Poor Taste is nothing short of astonishing: https://www.adventuresinpoortaste.com/2019/07/03/the-green-lantern-9-review-cosmic-s-o-s/

The passion for the DC Comics of Grant Morrison and all things Green Lantern is palpable, and leads to the best single issue reviews I’ve read this year. Seriously, each piece is an essay that provides context, history, and easter eggs that enhance the reading experience.

I talk a lot about the diminishing returns of re-consuming media in any form, but re-reading Morrison and Sharp’s The Green Lantern with these sorts of annotated reflections has led to one of my favorite comics reading journeys of recent memory. There’s a bigger conversation to be had about this approach to making comics – Morrison’s references come without explanation and require a near encyclopedic knowledge to truly appreciate – but the rewards of discovery are immense.

For that, I’m grateful for the great work being done in reviews like the above!