Last week’s installment gave us the second of Barry Windsor-Smith’s two Storm-based collaborations with Chris Claremont, a standalone issue called “LifeDeath II” that foreshadowed the return of (still powerless) Ororo to the X-Men. This week gives us a killer issue leading up to Uncanny #200…and, as comics fans well know, those issues with important numbers are always…well…important. Claremont, Romita and Green certainly weren’t resting up for the main event, though!

The book opens with Cyclops running through a Danger Room sequence. A couple issues ago, he received a communique from the X-Mansion and left his pregnant wife in Alaska to return to his longtime home. Moira and Logan interrupt near the end of the session to tell Scott they have important matters to discuss. They are, in turn, interrupted by Rachel, who had hoped to spend some time talking with Scott herself. Unknown to the X-Men at this time, Rachel is Cyclops’ daughter from the alternate, Days of Future Past, timeline. Since they don’t know that yet, Moira and Scott brush her off for the moment and get down to the matter at hand: Charles Xavier’s impending death due to his incomplete healing from the beating he received weeks earlier. 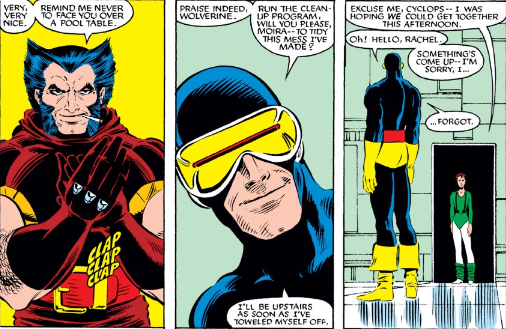 We cut to Washington, DC, home to Valerie Cooper, a government advisor on mutant issues whose appeared in the comic a few times, most notably when engaging the services of Forge in the events that led up to the loss of Storm’s powers as a result of a weapon Forge developed. When Dr. Cooper arrives home, she’s greeted by none other than the mutant Mystique–wearing Valerie’s own form, no less! Mystique offers the government the services of her Brotherhood of Evil Mutants in exchange for immunity from prosecution for their past crimes. As a test-run, Cooper suggests the newly-dubbed Freedom Force take down the founder of the original Brotherhood–Magneto, who is, of course, now working with the X-Men.

From there we visit Rachel, standing at Jean Grey’s grave and imagining Jean’s last encounter with her parents before dying on the moon and thinking about how John and Elaine’s rejection of Jean must have played a part in turning her into Dark Phoenix (remember, at this time, everyone thought Jean was Phoenix). These imaginings are painful enough–then she transitions from fantasy to actual memories of her parents, the future Scott and Jean of her timeline. By this point, she’s left the cemetery and is in John and Elaine’s home. She lashes out against her perception of our timeline’s Jean and claims the mantle of Phoenix for herself, but the energy overwhelms her and she passes out on the floor of her grandparents’ home, the Shi’ar holoempathic image of Jean they were gifted with fallen at her feet. 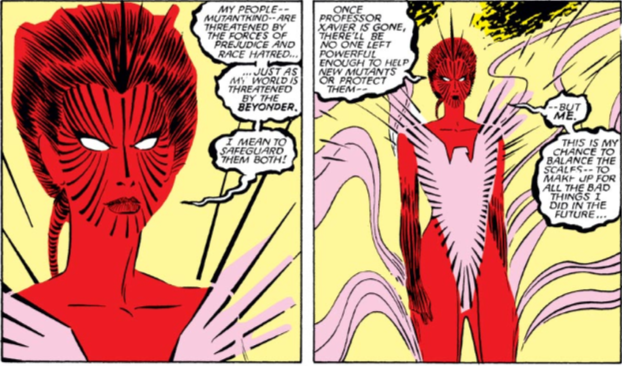 Back in Washington, DC, Magneto and Shadowcat attend a special Holocaust memorial. This is a cool, special touch in my book, Kitty and Erik both being Jews. Aleytys Forrester, Magneto’s girlfriend, is also in attendance. Magneto meets a woman he knew decades ago in Auschwitz, and Kitty meets a man who knew one of her relatives–then, Lee Forrester reveals herself to actually be Mystique, and the Brotherhood–er, Freedom Force–attack! Kitty summons Colossus, Nightcrawler, Cyclops and Wolverine, but Destiny’s ability to see the future allows the Brotherhood to thwart the X-Men as they launch their offense. Eventually, Shadowcat takes out Destiny, evening the odds. Colossus knocks out Pyro, while Nightcrawler teleports the Blob to the top of the Washington Monument and leaves him there. Rogue and Cyclops nail Avalanche and Spiral, respectively, but  Mystique gets the drop on Magneto, putting a gun to his head. Wolverine puts his claws to Mystique’s in turn, but the issue ends–surprising, perhaps, but again, maybe not to readers of Uncanny #198–with Magneto surrendering himself to Freedom Force, placing himself in federal custody and subjecting himself to trial for his past crimes.

This issue builds on the foundation laid in issue #198–view last issue’s LifeDeath as a standalone–and takes the initial juxtaposition of Rachel and Magnus to a satisfying climax. Rachel has taken on her mother’s mantle in an effort to be part of the solution, while Magnus, who preached tolerance to Rachel at Columbia University instead of his usual ‘Death to Humans,’ has decided to put his money where his mouth is by giving himself over to human justice.