Nimrod – named for the Biblical “mighty hunter” – is the ultimate manifestation of the Sentinel dream, a near all-powerful intelligent machine created to destroy mutants. Whereas mutant villains like Magneto or Apocalypse mean the X-Men have a fighting chance, Nimrod shows up to indicate the entire mutant race has all but lost the war.

Amazingly, Nimrod’s comic book history is relatively sparse (particularly when segregated from Bastion, the 90’s X-Villain with a shared history). Nontheless the Chris Claremont and John Romita Jr creation is near ubiquitous in its portrayal of future-state unstoppable machines, from comics to X-Men the Animated Series to X-Men: Days of Future Past

to Powers of X.

It’s the Hickman written House of X / Powers of X that particularly inspires this profile, with “Nimrod the Lesser” taking a role as the ultimate enemy of mutantkind in the future.

X-Men: Days of Future Past

While Nimrod is not named during these iconic issues, the concept hails from this dystopian timeline, and Nimrod stories will return here frequently.

“Days of the Future Past” also effectively sets the tenor for all Nimrod appearances, signaling an unwinnable scenario for the X-Men that they’ll have to try to escape anyway. 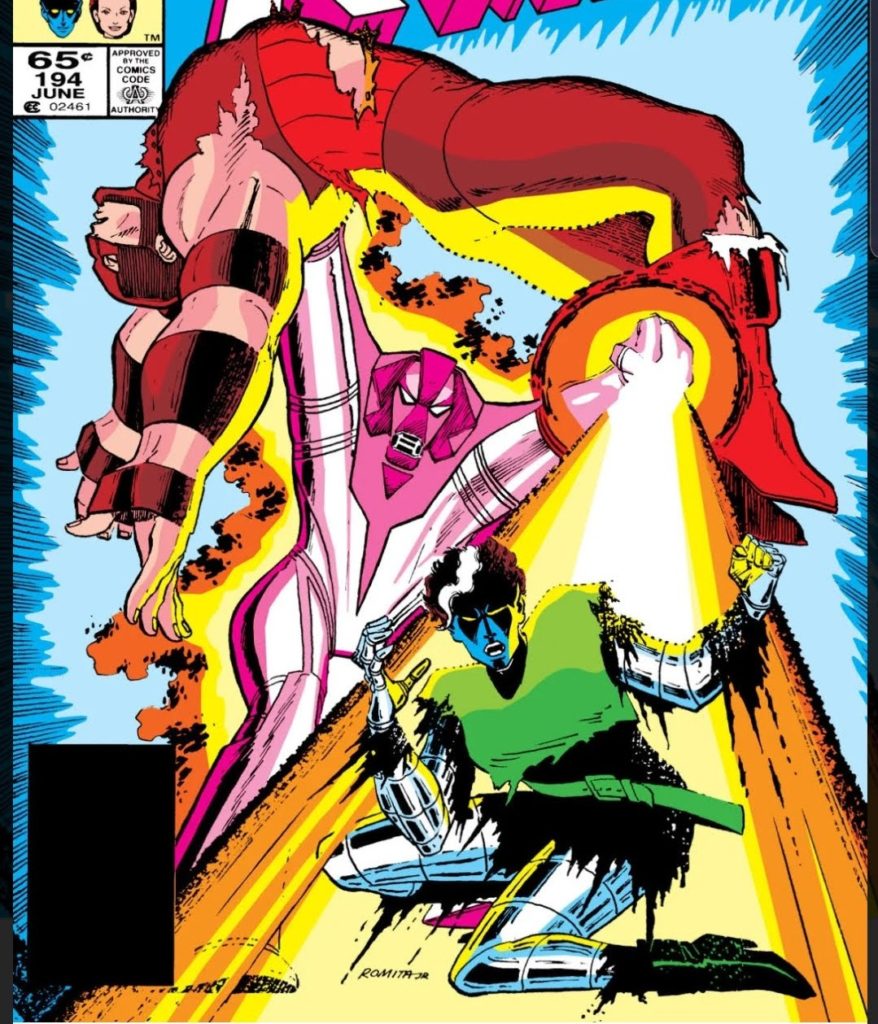 In his very first appearance – a one-page cliffhanger after some madcap X-Men and Avengers sword and sorcery – Nimrod is accidentally brought into the Earth-616 timeline and determines “If mutants exist, then, true to my prime programming, Nimrod must seek them out and obliterate them.”

Nimrod saves a human (Jaime Rodriguez) from a mugging, then becomes his *clearly evil robot* house guest, which is actually pretty hilarious. The real action takes place in Uncanny X-Men #194, when Nimrod attacks a shockingly chill Juggernaut and asserts his role as defender of humanity. It’s only through Rogue collecting the team’s powers and confusing Nimrod that the hunter-slayer is temporarily stopped.

Intriguingly, Nimrod mentions “Class Omega subjects are on a par with this unit,” which feels particularly relevant given the focus on Omega level mutants in House of X #1.

Nimrod takes on the X-Men and the Hellfire Club mid-battle, in what I’d consider his most intimidating display of force, literally disintegrating a member of the Hellfire Club’s royal circle.

These “Australia years” X-Men issues by Claremont and Marc Silvestri highlight a couple of things. 1) Nimrod has a propensity for playing Punisher when he isn’t a genocidal terminator and 2) Carol Danvers was totally stuck in Rogue’s body during this period of time!

In addition to weird and wild developments for Nimrod and Master Mold sentinel, Uncanny X-Men also features the following incredible dialogue from Nimrod: “Yo, hombre, we’re both robots, correct?”

To be clear, I’m not making that up. 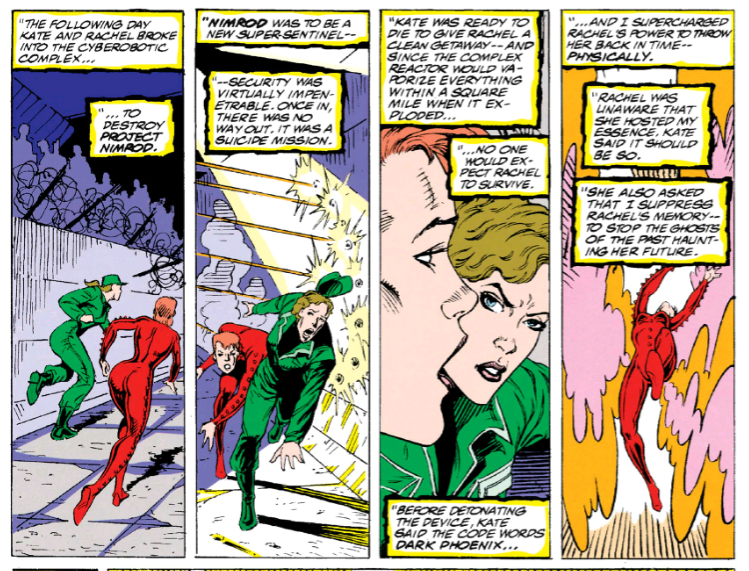 With an origin on an alternate earth, in an alternate timeline, it requires both time travel and multiverse hopping to get Nimrod to Earth-616. In the words of UGK, this is time travel that goes back front back, and side to side.

As such, Excalibur, the home of the cross-time caper, is actually a pretty great place to explore a few more Nimrod details during the run by Alan Davis. Since they’re from the same timeline, Rachel Summers and Nimrod are really arch-nemeses, and some portions of these issues look at that tortured relationship from the “Days of Future Past” landscape.

This is one of the more obscure picks on any essential reading list on Comic Book Herald, but this oddball “Engines of Destruction

” crossover is a really effective summary of the Nimrod and Bastion history! 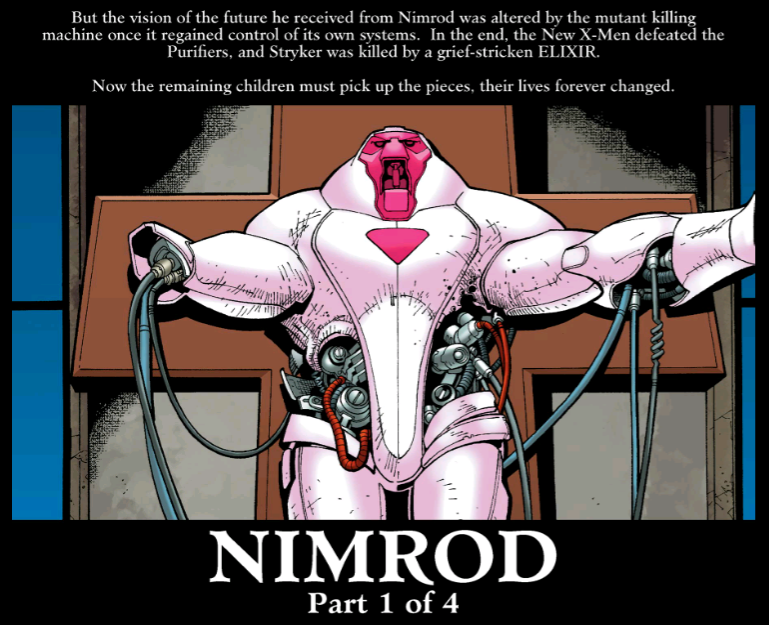 Nimrod returns during the 2000’s New X-Men series written by Craig Kyle and Christopher Yost. The hunter’s databanks are used by Reverand William Stryker to unspeakably evil ends, and then the series progresses to explore some more of Nimrod’s cross-time travel capabilities.

Nimrod is shockingly quite from here, although admittedly there are Bastion related uses of the concept that strike a similar chord. For those, I’d turn to the Yost and Kyle run on X-Force through X-Men: Second Coming

In Powers of X, Nimrod is the sentinel overlord of the Year One Hundred timeline, powerful enough to lay waste to seemingly any mutant who crosses his path.